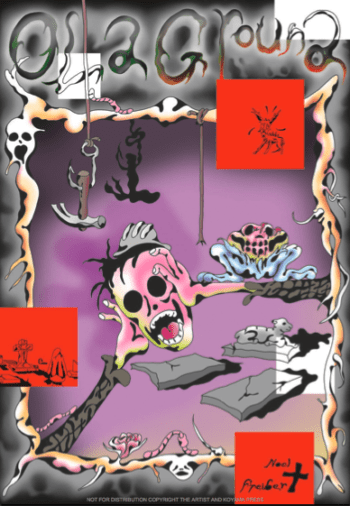 Noel Freibert’s Old Ground has a premise that puts it somewhere between a B-horror film and a Pixar release. Years of neglect have turned the Old Maple Grove cemetery into a home for a cast of odd characters: Otto, a frog; White Foot, a dog; and Silver Spoon and Cliffie, who converse from inside their graves while their bodies rot. The arrival of a wrecking crew threatens to disrupt the secret routines of the cemetery residents, and the residents’ response might alter the ratio of living to dead.

Old Ground sits closer to horror than to Toy Story, of course. Midway through the book, the wrecking crew’s boss smells a flower, then realizes it’s covered in worms. A couple pages later, skulls rise from roses in a scene that would suit a Mario Bava movie. But although Old Ground has its share of spooky genre beats, calling it a horror story isn’t exactly right either. It’s closer to a work of the eerie, in Mark Fisher’s understanding of the word. Readers find presences where they’d expect absences, along with questions about how much agency the things they’re seeing possess.

There’s a queasy affect to Freibert’s cartooning throughout Old Ground. The cemetery’s forgotten fences and headstones appear not only dilapidated but also ill. Sometimes the book mines decline for humor, e.g. a tombstone bent pathetically low to the ground, suffering insult to injury, indignity post-death. But Freibert can give his objects real menace too. Sharp hooks are a motif, for instance, and each one looks not only painful to the touch but eager to wound somebody. Even Freibert’s spot blacks resemble symptoms of some arcane and unfortunate condition. 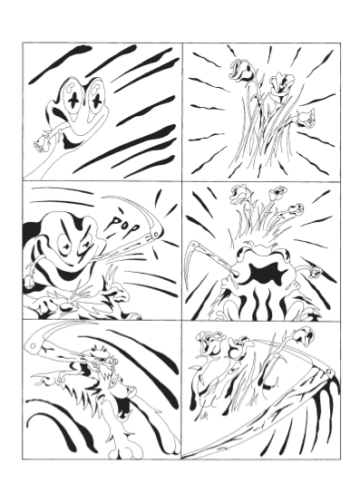 Perhaps the defining feature of Old Ground is the minimal cartoon integrity of Freibert’s figures. The book tests how much a character’s dimensions can vary from panel to panel before the character becomes unrecognizable. Hostility and playfulness, dueling sensibilities in Old Ground, often meet in these scenes. Near the front of the book, Otto the frog spends several pages morphing between shapes and bouncing around atop White Foot. Later, while frustrated with his crew’s truck, the demolition boss grows large enough to dwarf the vehicle, then gives the truck a kick. The body-to-head proportions of the boss’s subordinate, Renaldo, also routinely change, with Renaldo’s limbs expanding and contracting from panel to panel.

The limited integrity of these figures heightens the book’s sense of instability. Readers expect to comics to translate existence into symbol; with Freibert, the symbols can’t hold their shapes. And the technique fits a story set in a graveyard especially well. Instead of showing bodies decomposing in a photorealistic way, Old Ground plays with a notion of the changeable body in nearly every other way it can.

The mutability of Freibert’s figures becomes an effective characterization tool as well. Old Ground defines characters according to their wills—and often makes the will visible on a character’s body. White Foot, a devoted dog, grows when Otto needs a ride, paws swelling as it bounds around in excitement. The demolition boss, meanwhile, becomes a human hammer as he prepares to smash gravestones, a literal blunt instrument of capital. 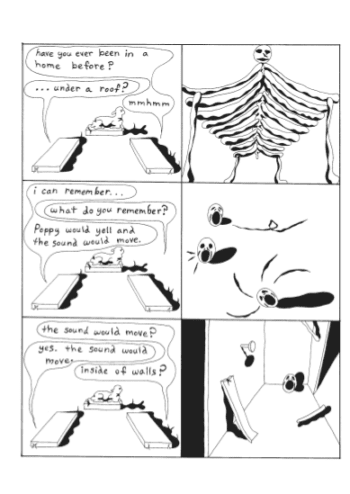 Pages devoted to Silver Spoon and Cliffie, two dead neighbors in Old Maple Grove, are static compared to scenes like White Foot’s frog rides, but they have their own strong formal touches. Freibert uses a six-panel grid for much of Old Ground, but when depicting these dialogues between the undead, he tends to subdivide the page into left and right columns. Panels at left show the two graves; panels at right show (something like) what’s captured in the mind’s eye of Silver Spoon or Cliffie’s decaying body. Cliffie can barely remember his (alive) life, for instance, and visuals in the right column make his already foggy recollections more abstract.

Freibert’s comic is most contemplative during the Silver Spoon and Cliffie scenes. They both seem to have died young, but Cliffie is the more innocent-minded of the two, and although they’re both more or less deceased, they hold different notions about death. Their dialogues cover themes including hope versus inertia, defiance versus acceptance. "it's no use imagining such things" as how their bones and their flesh would look, Silver Spoon says. "we will be buried forever. we are seeds never to be watered." And yet, the page’s two-column structure suggests, they’ll be doing that imaginative work for as long as they still can think.

Old Ground is ambitious in scope even beyond these existential wranglings. The book runs more than two hundred pages, and its length determines some of its biggest achievements and shortcomings. While Freibert strikes a satisfying balance between humor and menace, he’s less successful in balancing experimental cartooning and sustained, novelistic, character-arc-type storytelling.

Old Ground starts slowly, giving readers a wordless tour of the cemetery. It’s not a pleasant setting, but Freibert’s cartooning will compel most readers to explore it. Otto’s first joyride atop White Foot comes next, wild, unexpected, and a delight to read. The charming weirdness of sequences like this contributes to the story’s momentum at first, especially in tandem with plot-level developments like the arrival of the demolition crew. But similar scenes later on—e.g. a multiple-page sequence of White Foot pissing—lack the same propulsive qualities. Nearer to book’s end, Freibert includes an extended scene of the demolition crew wrecking structures in the cemetery. It’s bracing at first—the energy of Freibert’s linework goes a long way—then merely repetitive. 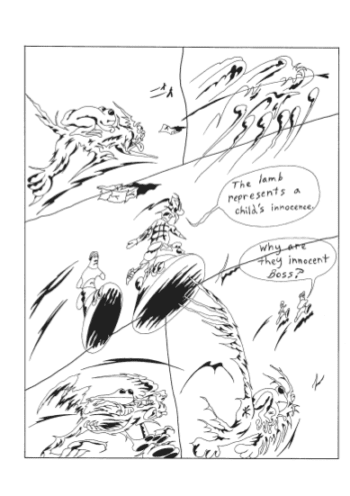 Despite the idiosyncrasies of Old Ground, the book is more narrative than not, more novel than not. And it tends to suffer when Freibert stays with a sequence too long. There’s enough of a through-line, over enough pages, that scenes like White Foot’s protracted pissing begin to read like moments of vamping—not exciting disruptions but failures of focus. Fortunately, the scope of the book also pays certain dividends.

If Old Ground has pacing problems, and its length makes them more obvious, it also offers some pleasures only found in long-form stories. Although Cliffie is long dead, he still hopes to reunite with his parents, a detail that gains in emotional heft as the story moves along. It’s a sneakily poignant part of the book. Meanwhile, when the demolition crew begins its final assault, Old Ground’s six-panel grid begins to shake and collapse—not the first time an artist has deployed this technique, but it’s highly effective here, after more than a hundred pages of tighter grid work.

The book’s length also allows for shifting impressions of Otto the frog, in a process that would not be possible in a shorter work. Readers meet him first as a weird aberration, and he becomes something like an avenging angel. Which makes Otto a mascot of sorts for the book. Old Ground's strangeness is obvious from the start. Its depths are not. But Freibert rewards people willing to do the digging. 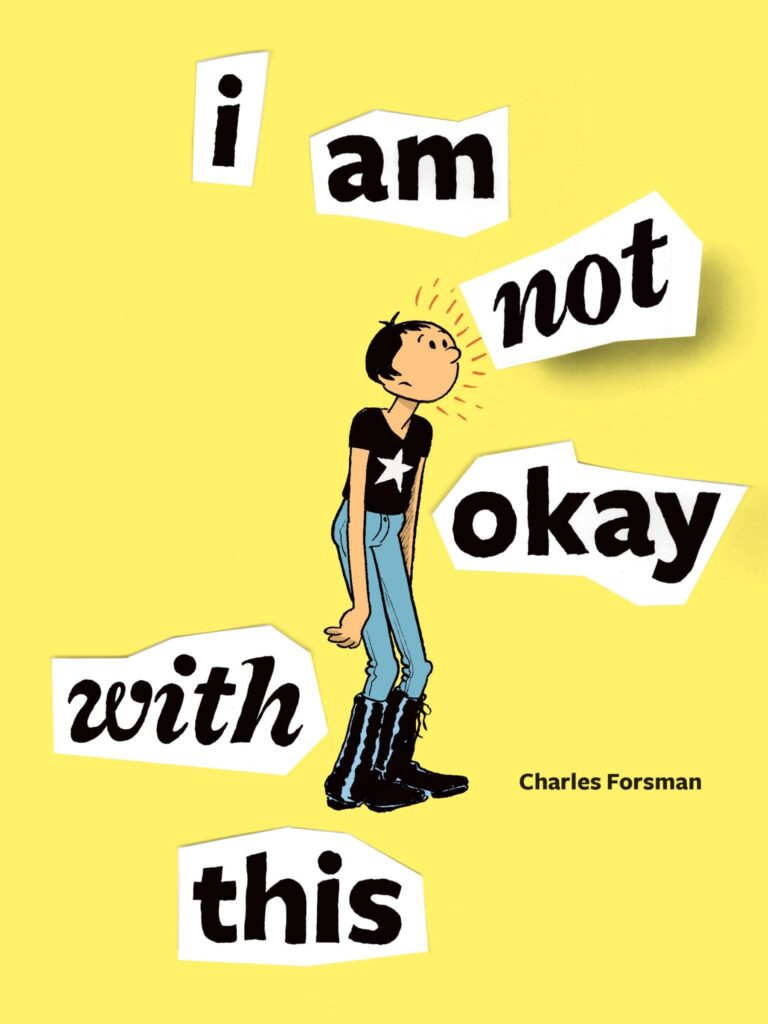 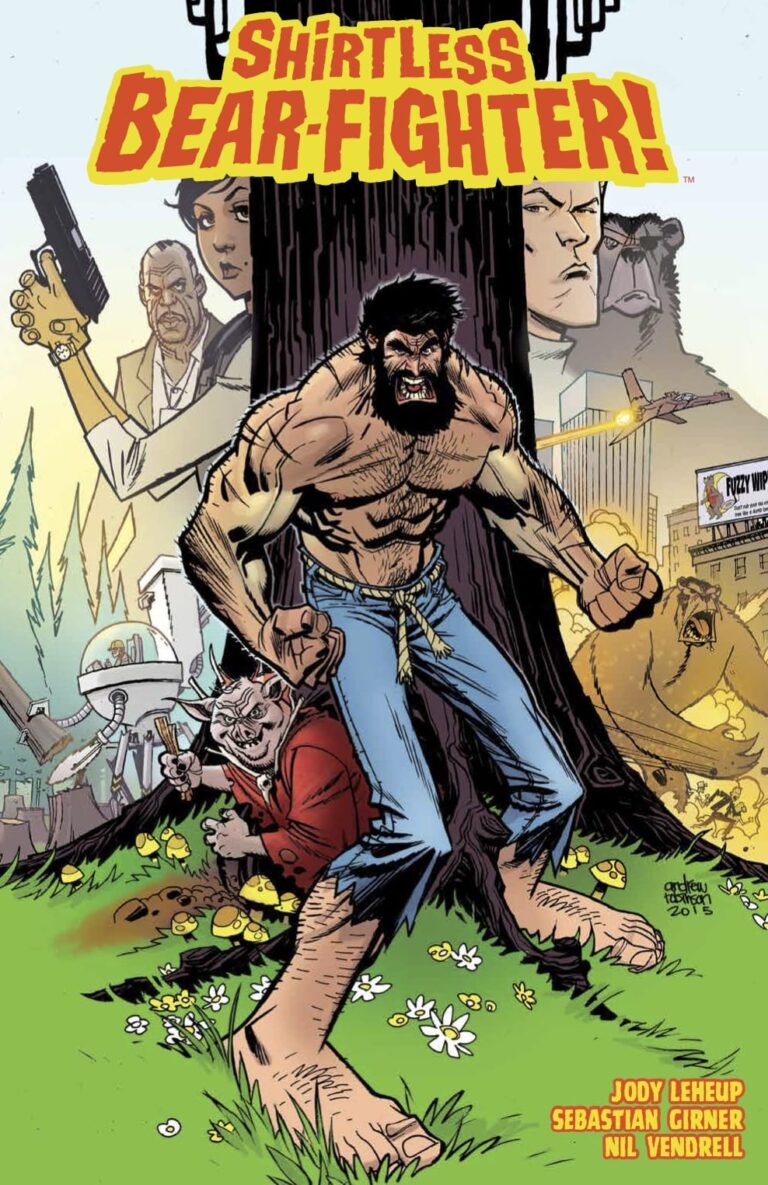