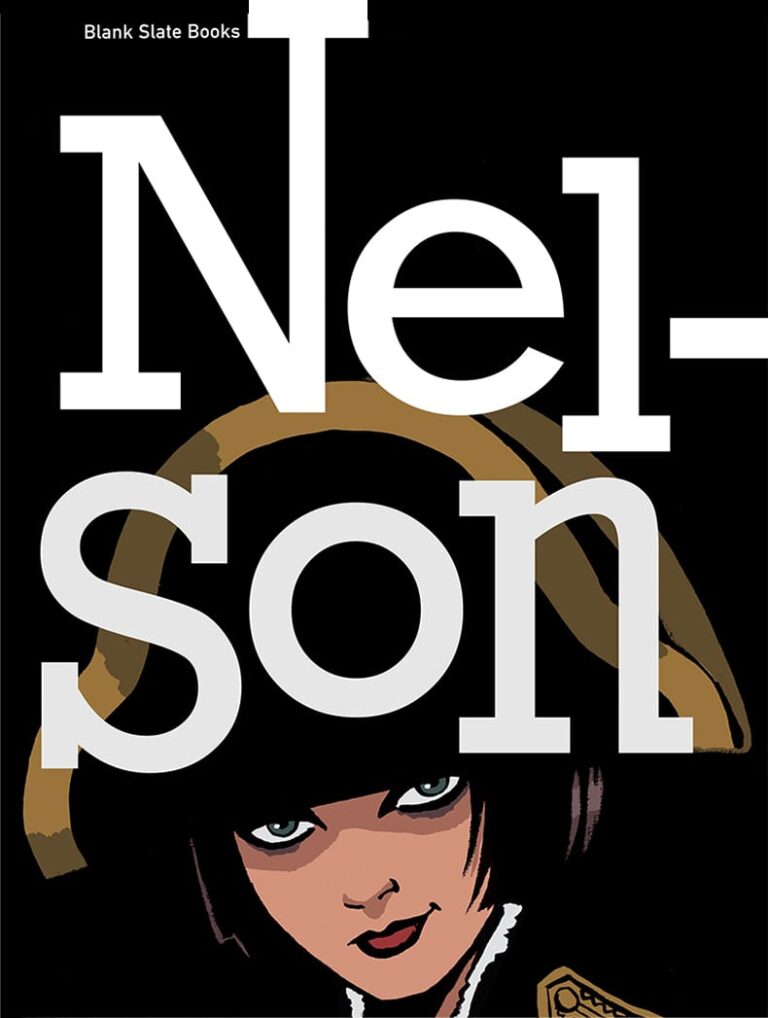 Nelson is a huge and splashy notice from not just Blank Slate Books but the UK in general regarding the state of cartooning in that country. Beyond the content of the book, the sheer scope and ambition of this project seems maddening: 54 different artists collaborate on a single story--the story of a single character over the course of her life. Each artist is assigned one day from a particular year of her life, from her birth in 1968 until the modern day. The idea came from Woodrow Phoenix, and he immediately started to collaborate with Rob Davis to make it happen. While each artist was free to tell whatever sort of story they wanted, Phoenix & Davis made sure that the story fit the tone and overall narrative through-line of the previous chapters. Along the way, the two made sure to contextualize the protagonist's story within the appropriate time period (a process that was not always smooth) as well as drop in certain narrative Easter eggs that didn't pay off until later in the story.

The roster of artists is a who's who of UK cartooning over the past thirty years, including veterans best known for their mainstream and Vertigo work (Philip Bond, D'Israeli, Warren Pleece, Rian Hughes, Sean Philips, and Duncan Fegredo), longtime popular and underground cartoonists (Roger Langridge, Carol Swain, Hunt Emerson, Andi Watson and Posy Simmonds), and many up-and-comers (Luke Pearson, Katie Green, Darryl Cunningham, Harvey James, Jon McNaught, Jeremy Day, Philippa Rice, and Tom Humberstone, to name a few). As one might expect, the chapter-to-chapter transitions are intensely jarring, sometimes going from photorealism to mainstream realism to minimalistic to scratchy to cartoony and back 'round again. The editors embrace this mess and simply make sure that the artists capture part of the protagonist's story using their own particular style. That editorial decision makes Nelson both an exhilarating and exhausting read, but it's a unique gambit in comics history. Sure, there have been plenty of jam comics and exquisite corpse comics in the past, but none I can recall that are this long, this ambitious, this focused, and this firmly edited. 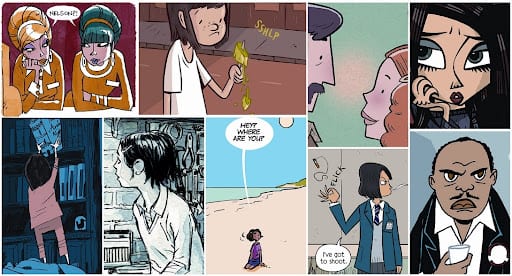 The protagonist of the story is a woman named Nel Baker, born in London. She has a twin brother named Sonny who dies just a few months after birth, which gives this story its first major narrative tentpole. The death of Sonny has a profound impact on her mother and also gives Nel a life-long sense of incompletion and restlessness. Indeed, her father wanted to name his child after Lord Horatio Nelson, and split the name into "Nel" and "Sonny" when he realized they were expecting twins. (The real reason Nel was going to be named after Nelson involves a sight gag that isn't fully hammered home until the very end of the book.)

The focus of the book shifts and sometimes lurches a bit, depending on the artist. Some artists are interested in the book as a way of getting at the politics surrounding a certain time period, such as the labor strikes and unrest surrounding the Thatcherization of the country. Some are interested in Nel as a sort of cultural sponge being influenced by the music of the time. Many pick up on her fractured persona and exploit that in interesting ways, especially as she becomes a teenager and young adult. Indeed, Nel's adventures in art school make her a sort of Hopey Glass-style charismatic troublemaker. Nel does eventually lurch into adulthood and responsibility (like Hopey, she becomes a teacher), though the chapters set after she reaches thirty are some of the weakest in the book. 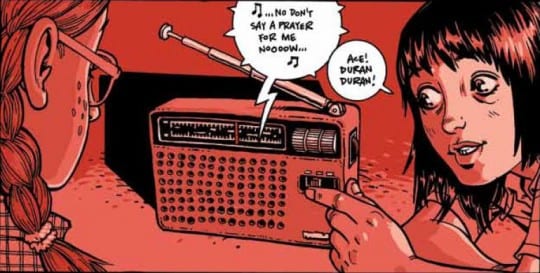 The pre-teen chapters establish Nel's creative, quirky personality. Ellen Lindner illustrates a heartbreaking chapter set at Nel's first birthday party, where Nel's mother can't help but break down when thinking of Sonny. The brightness of Lindner's pencils and her decorative style provide a nice transition from grief to hope. Luke Pearson's chapter is another heartbreaking one, in which Nel's grandmother faints from the sun but Nel thinks she's killed her. His understanding of the body language of children is remarkable.

The teen years find this book at its most rollicking, as D'Israeli, Simone Lia, Darryl Cunningham, Ade Salmon, Warren Pleece (absolutely nailing Nel's art-school performance art project in all its boisterousness), and Harvey James provide the most breakneck shift of styles in the book as they take us through Nel rebelling against authority in style. A big development comes in the introduction of Nel's lifelong best friend Tabitha, the Maggie to her Hopey. Of course, the parallels are not exact; Tabitha is a freaky girl, home-schooled by ultra-conservative Christian parents, who escapes to move into an anarchist squat and eventually realizes that she's a lesbian. Prior to all that, Harvey James delivers a strikingly cliché-free "hiking to a rave" story (the twist is that there's no twist--everyone's nice to Nel and she has a great time on Ecstasy), and Rian Hughes's chapter brings some nice off-panel commentary on how a young person in Europe might react to the fall of the Berlin Wall (road trip!). Another narrative tentpole is planted here: the revelation that Nel's father left behind a love letter from an affair, as well as a photo that confirms the existence of her twin brother, a secret that was never discussed.

That provides fuel for the stories in her twenties, as her father disappears and Nel goes through a major relationship and break-up with a musician. Tabitha is a constant, though it's obvious that Nel's status as a loner puts their friendship in jeopardy for a few years before their friendship is permanently cemented when they get older. One of the best stories in the book concerns a dream that Nel has when her father dies that's done by Roger Langridge. Her father goes to heaven and is judged for his actions, and he ultimately gets in thanks to his honesty regarding why he gave Nel the letter. Langridge's cartoony style is perfect for that sort of absurd dream sequence.

Nel runs aground a bit in her early thirties, and the book takes a major narrative misstep by clumsily interpolating the 9/11 tragedy into her life (she had booked a flight to NYC for 9/13/01). Duncan Fegredo's follow-up to that, wherein Nel "talks" to Sonny in a bar, is overwrought to say the least. Fortunately, in the next segment, Philippa Rice dials things back with her spare line and use of collage, and the book rights itself again. As Nel reaches forty, she doesn't so much get closure as she achieves a bit of perspective, as well as finding space in her life for a new lover and his son. Laura Howell, in a clever chapter about Nel joining Facebook, puts to rest what Posy Simmonds hints at earlier: Nel decides not to have children of her own.

Nelson is successful for two reasons: 1) The artists manage to create a fully formed, believable, and sympathetic character who is compelling and massively flawed. 2) The artists for the most part are fairly restrained in spelling out themes and plot points. There are scenes that must be re-read to fully understand their meaning in the full context in the book, such as Nel's first day of kindergarten, when her father makes lingering eye contact with her teacher (a detail I missed on my first read-through). Most of the stories in the book are not revelatory or especially innovative to any regular reader of slice-of-life comics, but the sheer scope of the book and the tightness of the editing combined with the complete freedom given to the artists in terms of their visual styles makes Nelson an impressive showcase and editorial achievement. 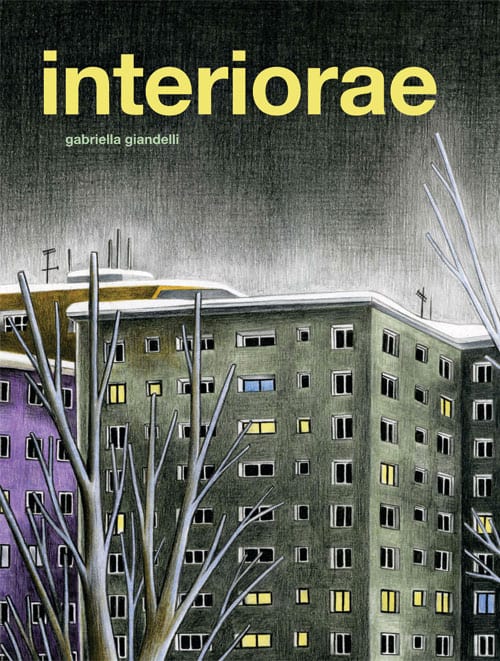 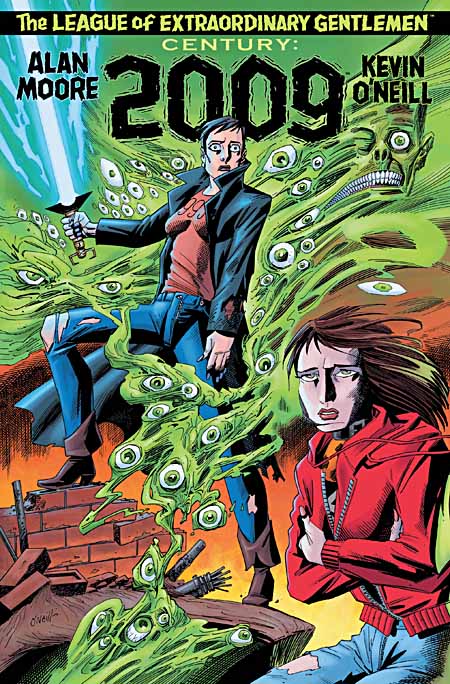