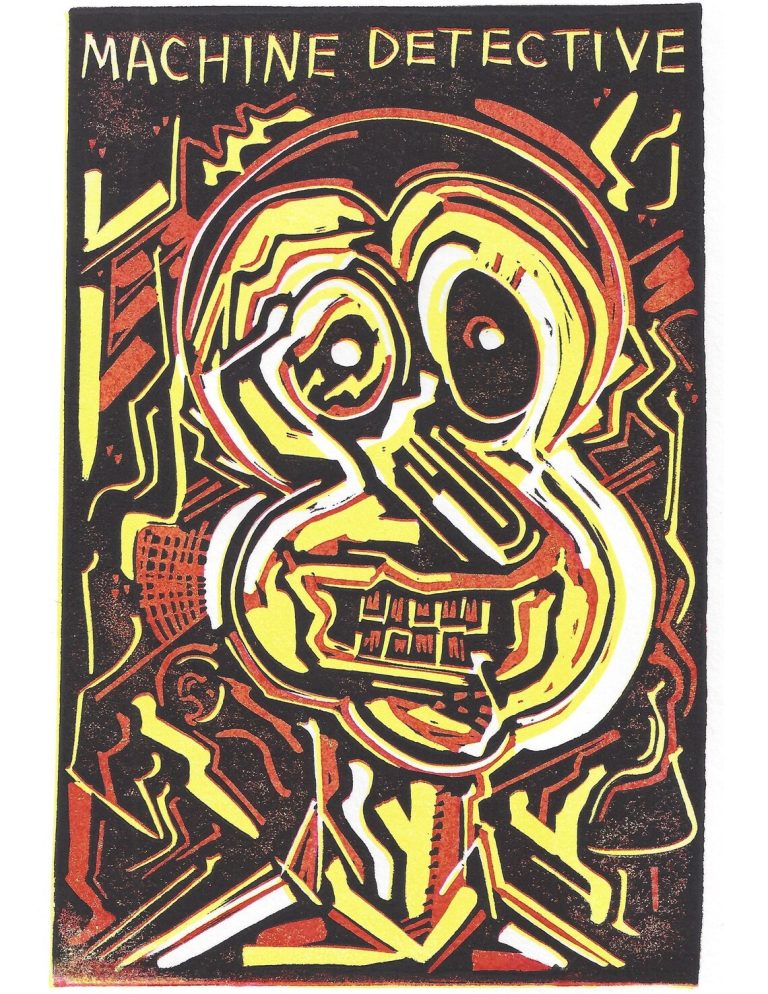 Billing itself as a “Friendly Wager” between brothers Dustin and Nick Holland (unless that’s just the title and I’m ascribing a double meaning to it that wasn’t intended - it wouldn’t be the first time), the exact division of labor on this new self-published comics zine, Machine Detective, isn’t necessarily all that clear, but be forewarned: if such things bug you, this likely isn’t the comic for you in the first place.

I say that because what’s happening on the page isn’t always entirely clear, either - but what the book has going in its favor is that the level of devil-may-care imagination on display more than makes up for any technical deficiencies either or both Hollands may suffer from as cartoonists. Trading in well-established sci-fi tropes—particularly those that are at the very least quasi-dystopian in nature—it’s not like these guys are hiding or in any way trying to obfuscate their influences one single, solitary little bit. In fact, they list them right on the inside front cover: David Lapham, Philip K. Dick, the Firesign Theater, the Marx Brothers, J.G. Ballard, William Burroughs, George Grosz, Otto Dix (name-dropped twice, for some reason) and, most obviously, Paul Verhoeven’s Robocop. It’s an eclectic list, and there’s very much an everything-but-the-kitchen-sink vibe to this project from first page to last, with the self-described “Holland Boys” utilizing everything from pens to markers to collage clip art to relief prints to washes in their phantasmagoric and often quite frenetic assault upon the optic nerve. 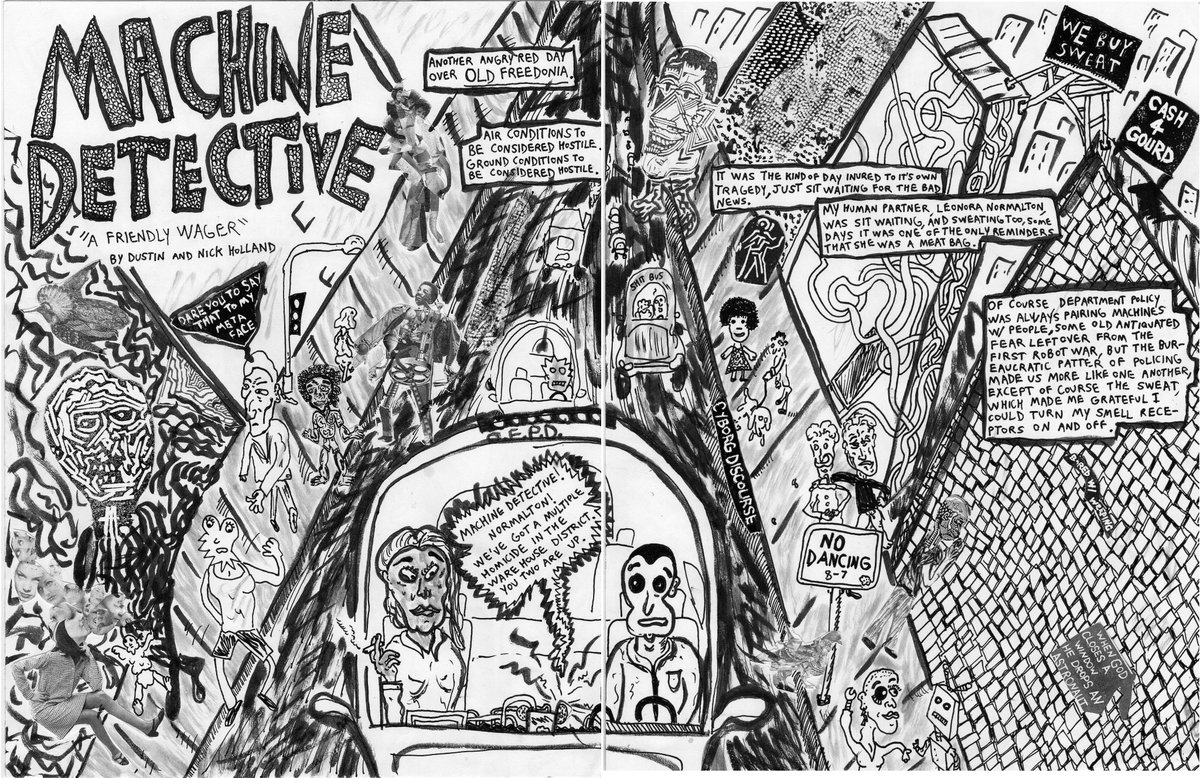 Readers familiar with Dustin Holland’s “Gorchverse” comics will have a pretty solid idea of what to expect here in terms of tone and tenor, but those coming in cold may find themselves taken aback at first by just how much sheer visual information is crammed into each page and panel. Even those heavy on “negative space” feel inherently cluttered and messy (and I mean that in a good way) simply by dint of the slapdash, freewheeling nature of the cartooning itself, which revels in the chaotic, the disparate, the outrageous, and the random, but does so without ever appearing desperately random. Sure, there’s an air of wink-nudge juvenilia to this comic, but it’s of a sort that is honest enough to admit that its very existence is a result of self-indulgence, thus avoiding the trap of being too clever by half almost by default, while at the same time letting you know that these guys likely could do more buttoned-down, “professional” work - provided they were vaguely interested in doing such a thing in the first place. Fortunately for us all, they’re not.

All of which is to say that the sort of reader that this class-conscious yarn about our titular machine detective and his/its human police partner on the trail of a crime conspiracy that reaches all the way into the upper echelons of fictitious locale Old Freedonia’s business world is a reader who privileges intensity and immediacy over all else. This being a collaborative effort and all, at the very least some slight degree of mediation between id, hand, pen/brush, and page factored into the creative process somewhere, but for all practical purposes this looks very much like a “whatever’s in you, just let it all out” sort of work. I’m even tempted to say that it has something of a “punk” ethos to it, but all too often such a designation is simply another way of saying DIY, so I think in the interest of absolute accuracy, it’s probably better to just stick with that. 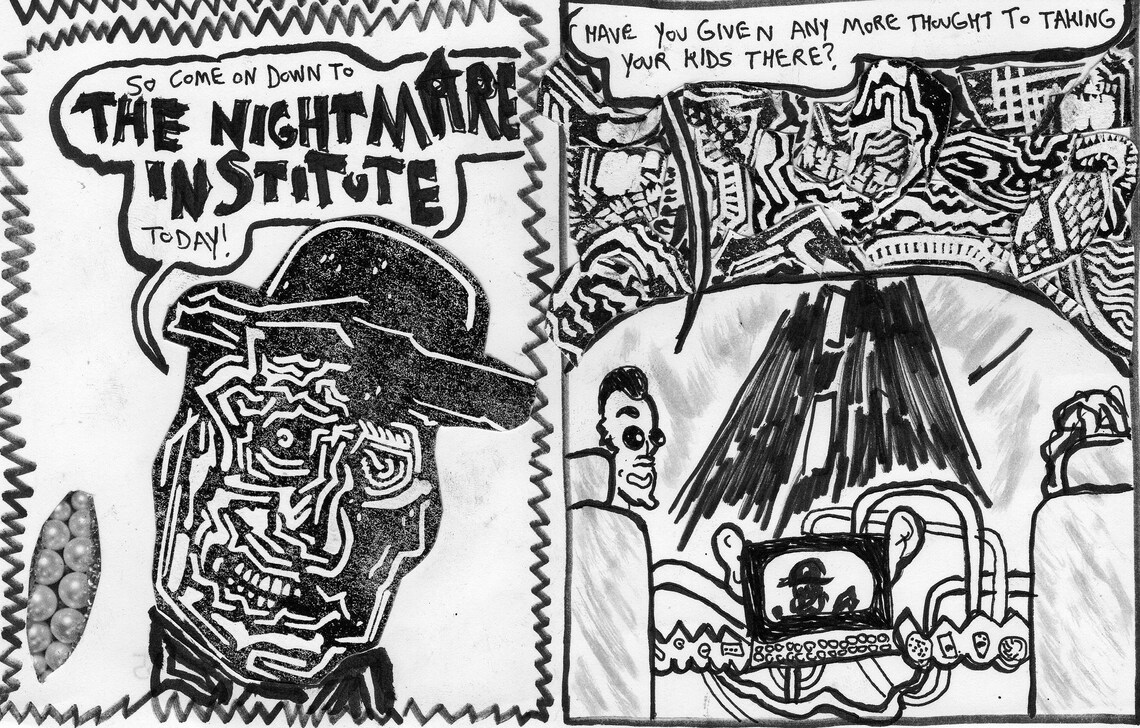 This intentionally haphazard approach carries over into the narrative as well, which is a delightfully curious beast in and of itself: events happen in order, but the segues between them are more intuitive than linear, resulting in a story with an entirely discernible beginning, middle, and end, but a really effing weird way of getting from A to B to C. Rather than building off each other, scenes spring forth from each other, and many a character or idea (most notably the mystery substance known as Soylent Cream and the child behavior-programming outfit charmingly titled The Nightmare Institute) is looped into the proceedings for no reason other than, hey, they kinda fit - and lo and behold, we somehow do end up with something very much akin to a resolution to the investigation at hand, even if we arrived at it by just about the most circuitous means possible. And who knows? Maybe we’ll get a sequel at some point and some of these ideas can be explored further. Or maybe it’s all just goofy one-off stuff thrown onto the pages of a goofy one-off comic. I’m not choosy; there’s room in comic-reading life for either, both, or something else entirely. I can’t predict what the Hollands are doing from panel to panel, much less from project to project - and that right there, more than anything, marks them as talents worth paying attention to. 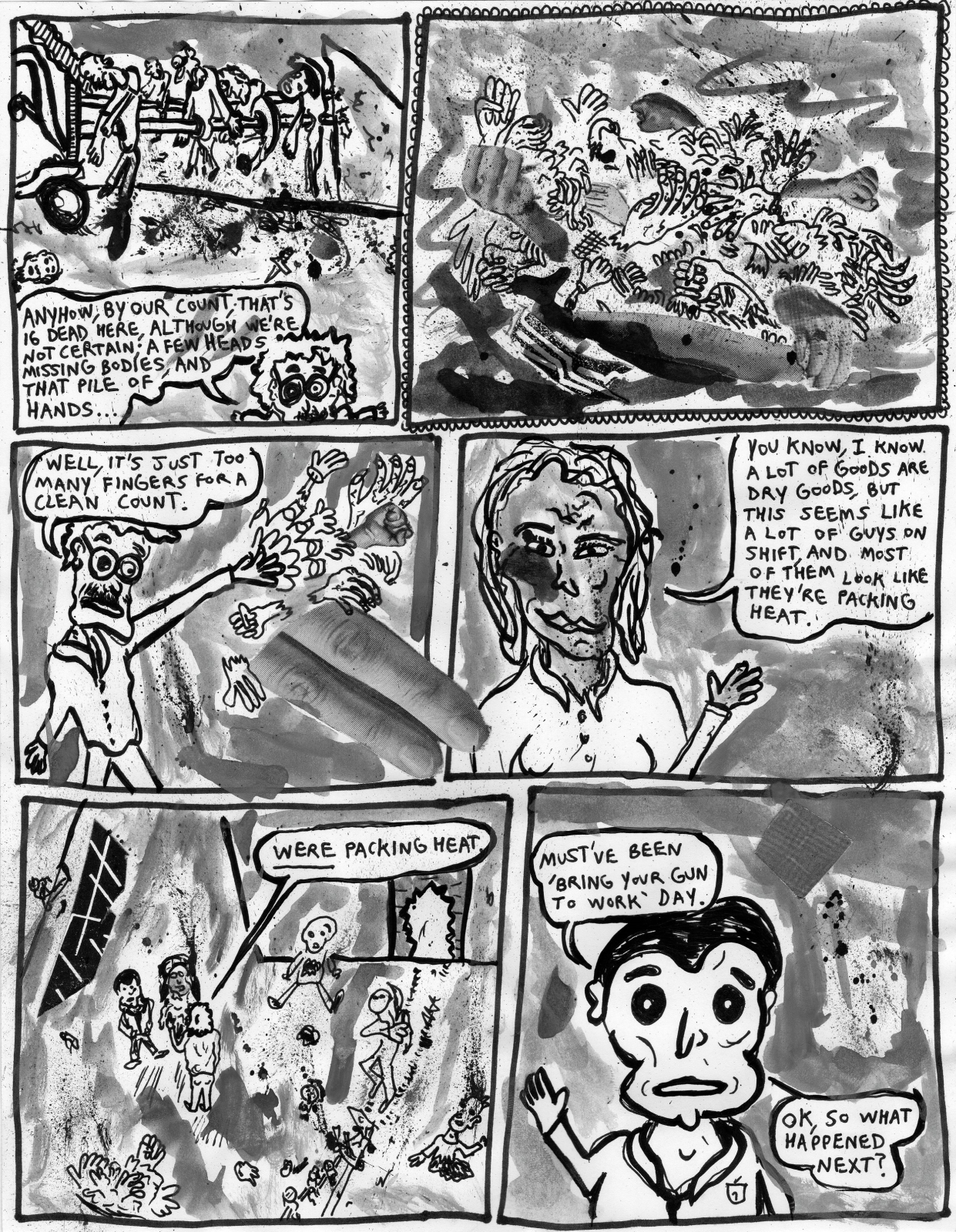 As a matter of general principle, I suppose it’s reasonable to think of this—and the aforementioned “Goochverse” comics in general—as being “avant garde” in nature, but luckily the self-conscious more-outré-than-thou attitude implicit in so much avant garde art (or art that desperately wants to be avant garde) is notable for its absence here. You could be forgiven for assuming otherwise in today’s navel-gazing and sanctimonious media landscape, but it really is possible to do something highly experimental, formally challenging, maybe even a bit transgressive - and still have fun with it. To that end, in addition to providing readers with batshit crazy fun that dares them to keep up, Machine Detective also contains within it valuable (and mercifully non-preachy) lessons for current and prospective cartoonists, as well. How to draw may not be one of them, but how to craft a comic absolutely bristling with creative energy and intent is. 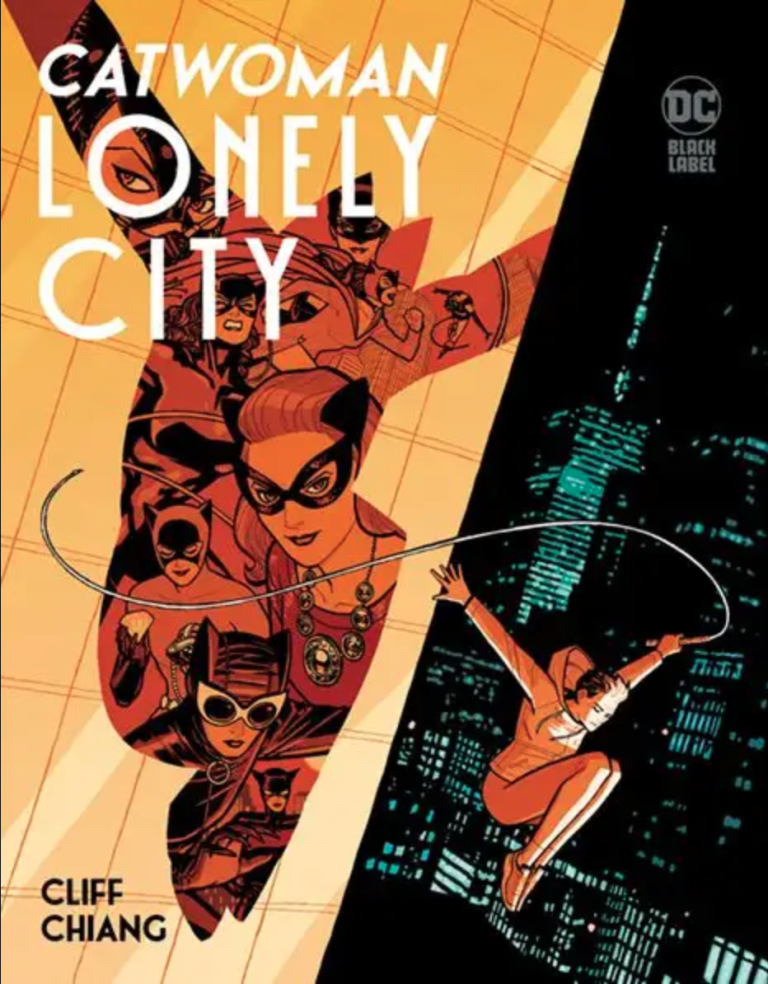 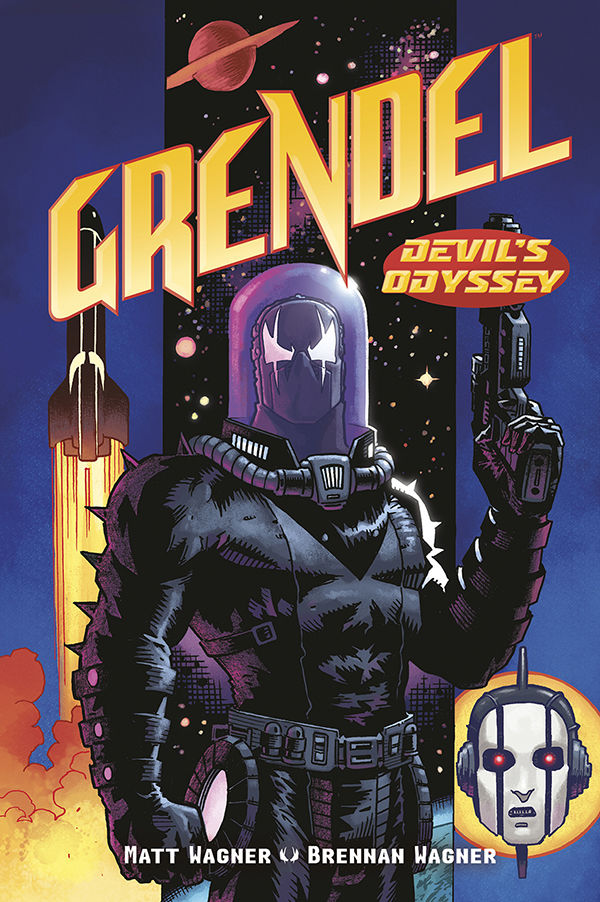