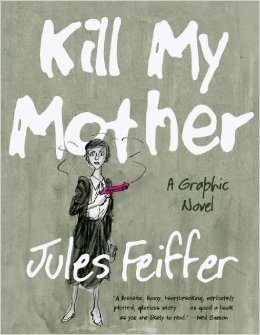 It's exciting to see a great master having fun. Feiffer has already drawn a lifetime's worth of masterful comic strips, comic-like books, children's books, plays, screenplays, and illustrations.

A key formative relationship depicted in his recent career-spanning prose autobiography, Backing Into Forward, was Feiffer's teenage apprenticeship with Will Eisner. He wrote stories for Eisner's detective comic, The Spirit, and he has often expressed what an influence those early talks with Eisner were. I would love to time-travel to hear those conversations. Imagine these two Jewish guys from the Bronx working in a lowly comic book medium (comic strips were more revered then); while Feiffer was a snotty 16-year-old, Eisner, running the whole studio, was only 28! Feiffer would go on to do Tantrum. Eisner would do Contract with God. Feiffer's relationship with The Spirit and Eisner is evident again in this, his new book, the noir drama Kill My Mother.

Feiffer has frequently voiced his envy for the drawing abilities of noir guys like Eisner and Milton Caniff. Personally, I love Feiffer's drawings. Eisner and Caniff draw like they're looking at film stills, while Feiffer draws like he's sketching from the front row of a play. He draws dancers and his drawings themselves are live performances. They only move forward. It would be difficult to retake or remove a single stroke. If you follow the line of a Feiffer leg down, it flies from the front of the thigh to the back of the calf. It travels through the body like muscles, or fabric. Think of artists comparable to Feiffer. Quentin Blake might look like Feiffer on first glance, but Blake's legs and arms are more tube- or stick-like. They don't have a gesture sweeping through them. Another comparable post-Steinberg smart drawer is Tomi Ungerer, but Feiffer acts faster and freer. Feiffer's women dance; Ungerer's are tied up. If you copy a Feiffer drawing, at some point you'll think, "This is like a scribbly Al Hirschfeld drawing!" Al Hirschfeld, of course, has a deep love of the theatrical that Feiffer shares.

Feiffer's writing often appears in the form of monologues or one-act conversational scenes. While Kill My Mother is a noir story, it doesn't have the running interior narration that those detective stories often have. It's social. It's mostly dialogue scenes, with an occasional monologue chapter. In a scene from Feiffer's screenplay for Carnal Knowledge, Jonathan (Jack Nicholson) tries to pick up Susan (Candice Bergen). Jonathan says, "Most girls I talk to, it's like we're spies... we're speaking in code... everything means something else. Like I say, 'Would you like to take a walk?' and it means something else." The scene continues with the two characters describing lines of dialogue that always "mean something else." Everything means something else. This seems to be the baseline of how Feiffer approaches scenes. Often a character will start dancing/talking about one thing and then, in the last panel, the character realizes they were actually talking about something else. Feiffer understands that the content of a scene usually departs from its form.

A male private detective is at the center of Kill My Mother, but the majority of the story follows two families of women and a mother-daughter relationship between the detective's assistant, Elsie, and her own daughter Annie. It reads like a remix of Feiffer's fraught relationship with his own mother, as discussed in Backing into Forward, plus a real love of pulpy set pieces (a stellar boxing sequence) and ’30s and ’40s old Hollywood drama. I'm glad he got the autobiography out of his system because when I got an advance copy of this book in the mail I thought: "This is going to be a riot! I'm so psyched to read a twisty noir comic drawn by Feiffer!"

The advance copy described this as Feiffer's "first graphic novel." Much like the term "graphic novel," this is really just a marketing ploy. Feiffer has been marrying words and pictures into books all of his life... Isn't Tantrum a graphic novel? However, this is the first time he's attempted Eisnerian layouts in a long-form work. In all of his other comics, the words and panels are slightly, and very deliberately, separated for easy reading. The panels are either in isolated pages, like Tantrum, or a stream of panels with sentences above the characters heads (Explainers) or heavily illustrated prose (Man in the Ceiling.) It's possible that this separation, or obvious distinctions between panels, has helped his work become so popular outside of the core comic book audience. In Kill My Mother, he goes the opposite direction, with nearly every third page having an explosion of Eisnerian panel arrangements. As a cartoonist, I love it that he threw himself outside of his usual mode and attempted this. But, as a reader, it's because of these new layouts that I must sadly and reluctantly report that this book loses me.

Sections of this book are as enjoyable as anything Feiffer has ever done. It has a powerful boxing sequence, and stunning monologues by Elsie. Everything that's great in this book is done in the classic Feiffer method of an Explainers-like series of panels of a character performing. Unfortunately, this is interspersed with pages that a human eye does not naturally navigate. I had to read some pages three times before I could get some sense of Feiffer’s intended rhythm. Often, one panel’s elements cross over into other panels to create strange moments that the eye lingers on that have nothing to do with the drama of a scene. Some of these pages are truly bizarre. Look at this page, below, which is a confrontation between two men wherein the mustached man's foot is propped next to his own head, and an elbow seems to guide us down to the next panel, with a gun going to a third panel, but that's actually an incorrect reading of the sequence. The book doesn’t follow the leads the panels themselves indicate. Unfortunately, much of the book is like this.

Somewhere in the middle of reading Kill My Mother, I thought I had it figured out: "Oh he doesn't understand that we'll glance at the word balloons when they reach outside of the panels, or that we'll go to where our eye instinctively wants to go.” Then I added a guess: “After looking at each panel, we should zoom out to a God's eye view and take in the whole page … and then zoom in to the next box according to the standard left-to-right, top-to-bottom order." I promised myself I would do this, so that I could enjoy this thing. But a couple of pages after making this promise, he broke the rule and used a word balloon to move from one panel to an unusually placed consecutive panel. Shit. I realized I was frequently going to interrupt my reading to figure out which panel, or word balloon, to read next.

Eisner's pages might have similar elements (like inset panels, and montage-like structures) but they're all totally readable, and (most importantly) driven by the content of the scene. Darwyn Cooke, Craig Thompson, and sober Frank Miller have all employed Eisnerian layouts and made them make sense. It can be done. Also, the "where do I read next?" effect can be done beautifully. Chris Ware's Building Stories is a prime example. When done well, it creates a floating, dreamy feeling, or a feeling of disconnectedness. Here though, most of the time, these abrupt, confusing transitions just screw up gags and story moments. Frankly, it looks like Feiffer had a (great) script and, in adapting it to a comic, tried to jazz up the scenes with unnecessarily complicated panel arrangements.

Reading this book is a battle between your eye’s instinctive movement vs. a forced evaluation of where your eye is "supposed" to go. In one panel, two characters' word balloons are connected with a weird tail that I can only figure was added because he didn't feel like redrawing the panel to arrange the balloons so they would naturally read in the correct order. A major story reveal is placed on the right side of a two page spread, a positioning that blew the reveal completely! Annoying design bumps in the road like this are too numerous to list here. A pulpy noir like this should be a fun joyride with fluid ups and downs and exciting turns. This was a herky-jerky ride. 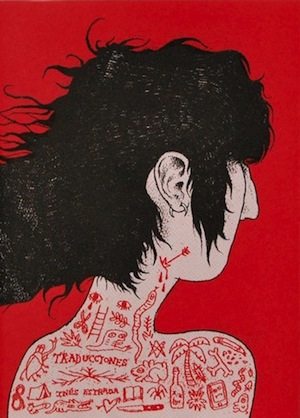 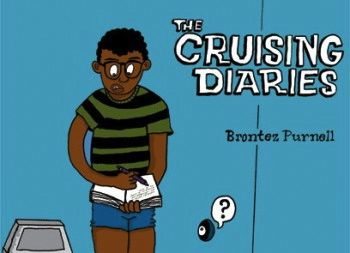