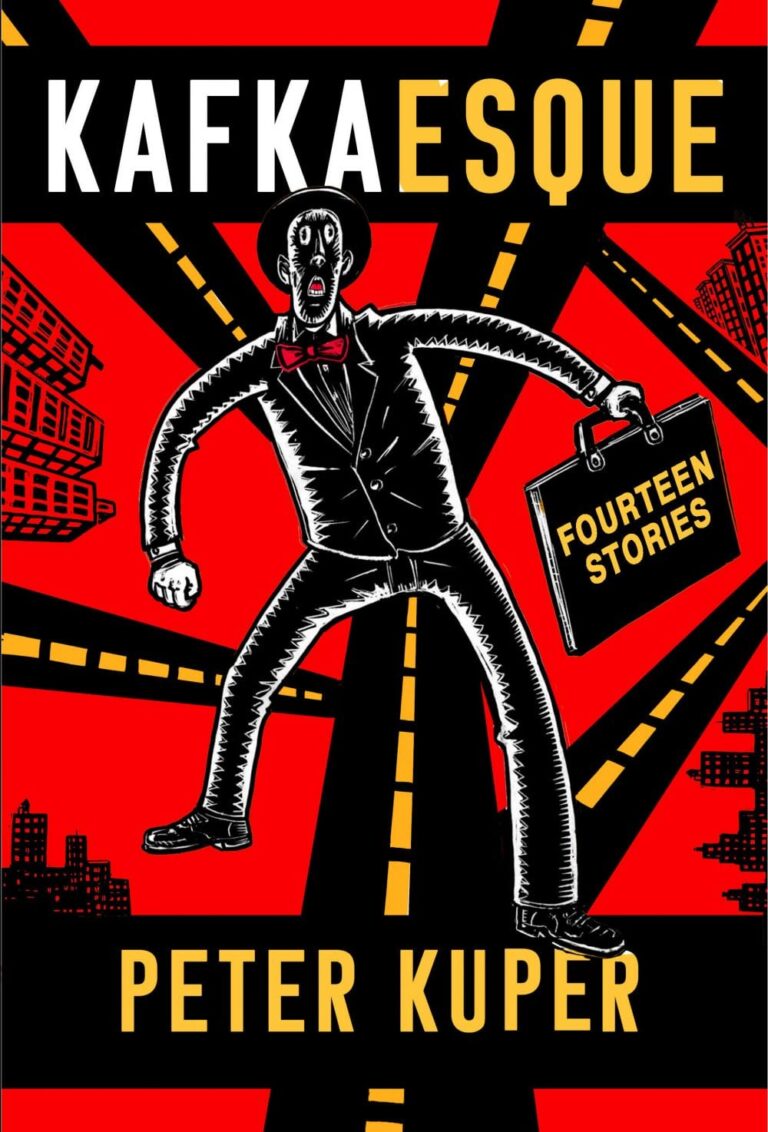 The term “Kafkaesque” is thrown around a lot these days, and even people who have never read anything by Franz Kafka seem to have a general sense of what it implies. Our daily brush with a needlessly spiteful, hopeless, and incompetently authoritarian government has us perfectly conditioned to appreciate what the famously pessimistic writer was going for back in the turn of the 20th century with his short stories about Austro-Hungarian bureaucracy and existential dread.

However, Peter Kuper is using “Kafkaesque” in its most literal meaning: “of or related to the works of Franz Kafka” in his latest book of the same name. It collects 14 short stories adapted into comic form, some of which were previously collected in 1995’s Give it Up! And Other Short Stories. Adapting and recontextualizing the writer’s work has been an ongoing project for Kuper since the late 1980s. He’s even previously adapted Kafka’s masterpiece, The Metamorphosis, to great acclaim back in 2003. Here he is playing with some lesser known and very short works (“The Trees”, for instance, is only 4 sentences long), as well as some that you’d find packaged with The Metamorphosis in prose collections like “A Hunger Artist” or “In The Penal Colony”.

Usually, when adapting literary prose, comic creators are too slavish to the source material, unsure of what to cut from the sacred original text, resulting in paragraphs of narration that overpower the art. Kuper’s greatest feat here is how heroically he edits Kafka down, using just the right amount of words as captions to accompany his visuals. In being so concise, he stays true to form as a cartoonist without losing anything vital from the source material and keeping Kafka’s “voice” intact. 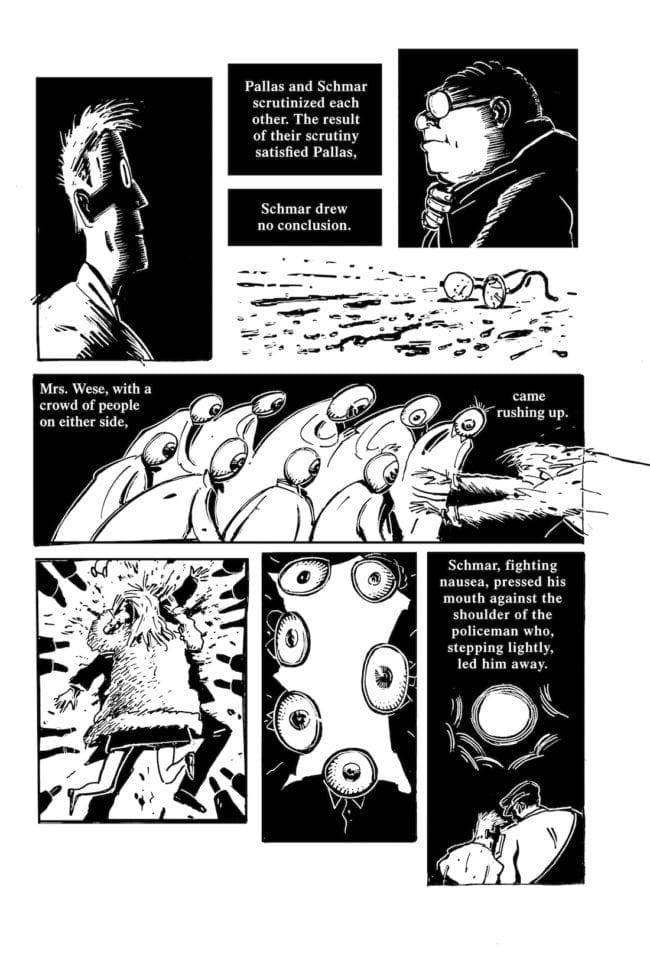 He also doesn’t just treat each story straight. Instead, he takes little liberties where Kafka’s intentions may have been open-ended. He takes “Excursion into the Mountains”, a paragraph-long contemplation of man’s relationship with nature and humanity and tells it from the point of view of a neanderthal. He stretches the metaphor of “The Trees” as man into something more specific about homelessness. He changes the helpless protagonist of “The Law”– one of the most pure examples of a “Kafkaesque” story – into a black man. Sometimes he adds cartoony visual metaphors like the police officer with a gun for a nose in “Give it Up!” or the crowd of onlookers with eyeballs for heads in “A Fratricide”. 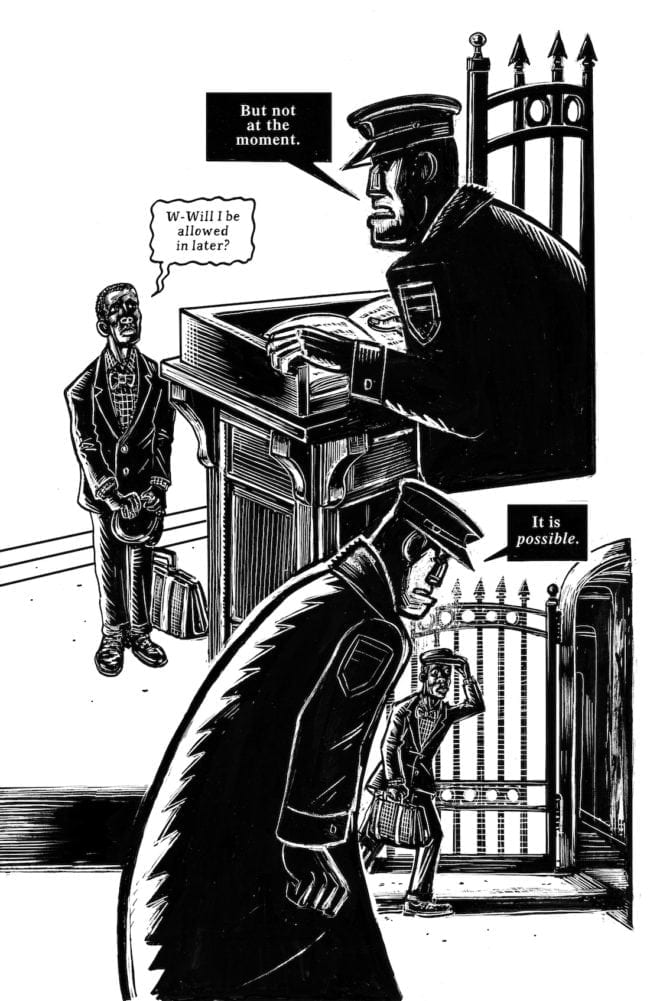 Kuper chose to create all these comics using scratchboard. It is an unusual and highly unforgiving medium that requires an artist to start with an all-black canvas of ink and work backwards, in a reductive fashion, building form by scratching away blackness to reveal where the light would hit the subject. The effect, when done right, looks like a woodcut engraving which Kuper does in order to invoke the German Expressionism of Kafka’s era. In particular, Kuper is emulating artists like Lynd Ward and Frans Masareel whose experimentations with sequential woodcut engravings they positioned as “wordless novels” would make them early pioneers of the comic form.

Partly because of the scratchboard, this not as visually rich a reading experience as, say, Kuper’s most recent graphic novel, The Ruins. So much of his energetic style is lost without his signature fiery color palette and colored pencil textures. Some of these stories were also done many years ago and in a difficult medium and the roughness shows. You can tell that this was a rewarding experience for Kuper to create these comics but sometimes exercises like this are more fun for the artist to create than for the reader to enjoy on their own merit. There are a lot of excessive, manic compositions and title page designs that are more Eisneresque than Kafkaesque, yet, they make this considerably more playful and, at times, yes, fun than you’d expect from a Kafka book. 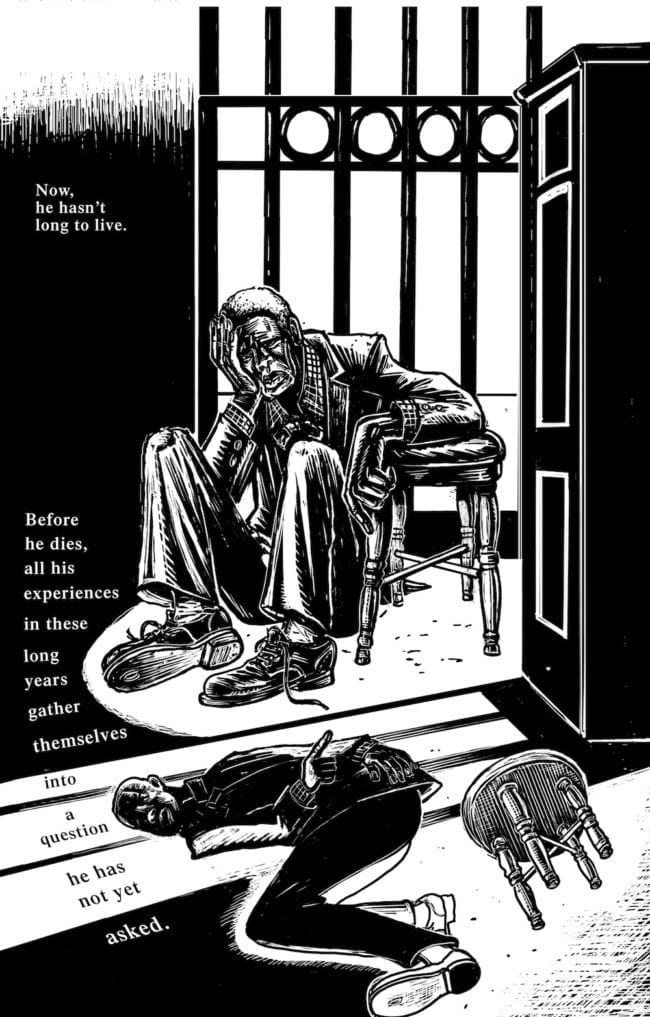 For those who have little experience with the original stories (and I’ll admit, I had not read any of these until now in order to compare them to comic versions) Kuper creates an accessible gateway for Kafka amateurs and a varied sampling that may surprise you and possibly expand your own definition of what constitutes something as being “Kafkaesque.” 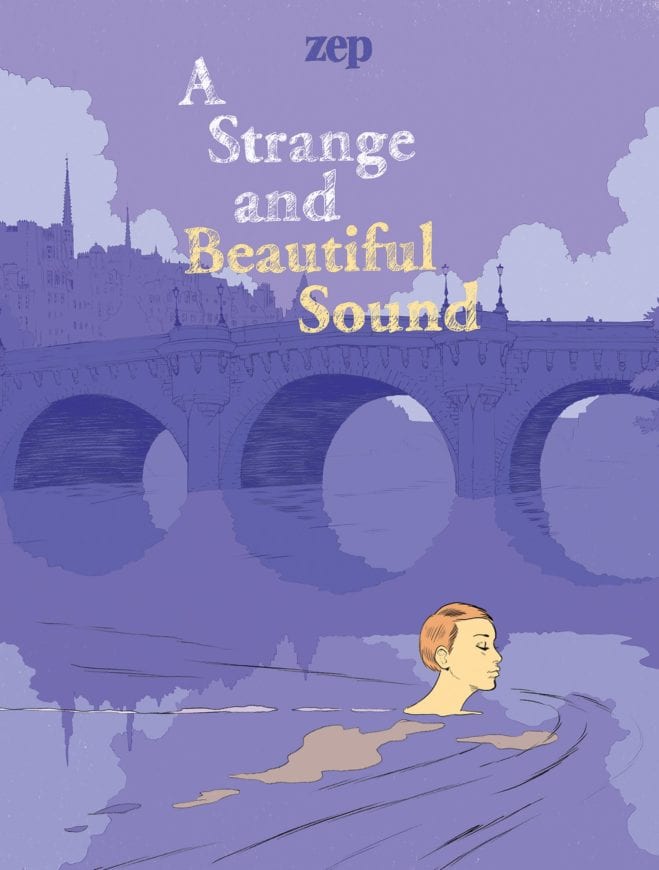