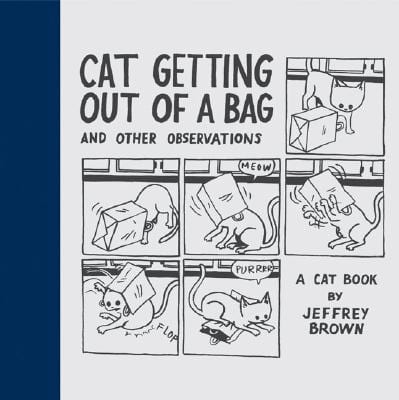 The irresistible field of what I'll call "Cat Appreciation Art" (or "CAA") is often queasily commercial and sentimental, but it lies in the rich artistic tradition of capturing your beloved. If you dismiss the notion of photographing/drawing/writing/singing about what you love, or what you desire, you dismiss most of everything. David Hockney said about his paintings of his dachshunds: "Nobody understands those pictures. They're about love."

Of drawn CAA artists, the most well-known is the Art Nouveau printmaker Steinlen. The guy drew a lot of cats in a lot of different ways. His pussies stand stoically erect, as if carved out of wood, petrified. Louis Wain's crazy cats don't putter around either, they pulse in a "cuteness overload" overload. 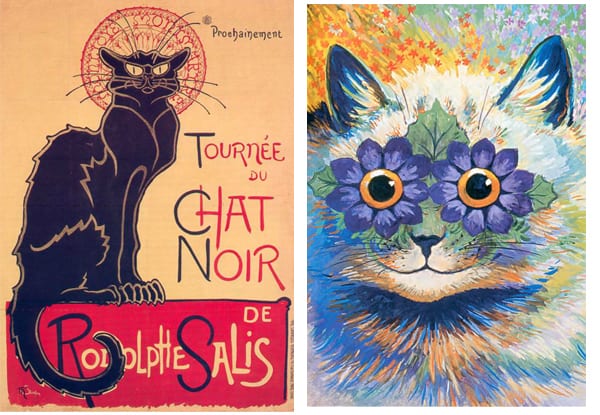 Cartoonist Jeffrey Brown's cats aren't excessively cute and they're not frozen at all. His focus is on the changing flexibility of cats, and in this way he's closer in spirit to the 1850s CAA of Utagawa Kuniyoshi who, taking after Hokusai's observational manga, affectionately documented the activities of felines. 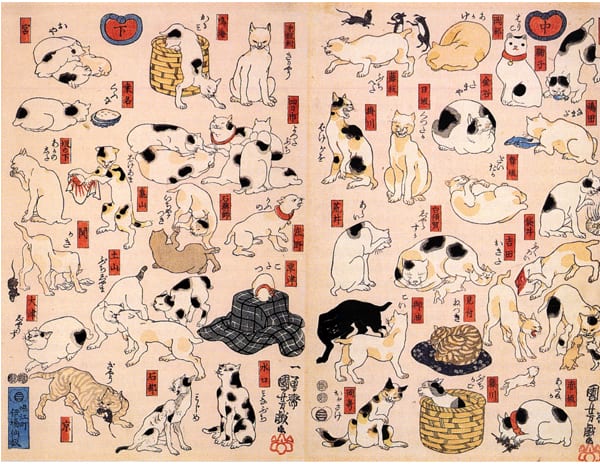 Cat Getting Out of a Bag, Cats are Weird, a postcard set and a journal book are all collections of cat strips Brown calls "observations." Observational comics are similar to observational drawing, figure and landscape drawing. They probe the everyday, the seen. Cartoonists weave observational comics inside of larger narrative ones, Chris Ware being an obvious example, or the countless mangaka taking pause to draw a drop of dew. You can find a million examples in comics of rendering and extolling the mundane.

Similarly, stand-up "observational humor" highlights a mundane subject ("What's with airplane peanuts?") and cleverly, insightfully twists it until the audience laughs: "It's funny because it's true!"

Jeffrey Brown's cat books are the equivalent of a comedian just eating airplane peanuts in front of us -- and it's genuinely funny. The laugh doesn't come from presenting a mundane activity as a joke. The observation itself, the eating of the peanut, is somehow elevated to a real gag, no twist necessary.

Brown's talent at composing scenes with an inexplicable comic timing has often been at the service of autobiographical relationship stories (Clumsy) or action genre parodies (The Incredible Change-Bots). These cat books occupy a new territory, unique to him. Newspaper strip humor, from Nancy to Marmaduke, is clever. At their best, these cat comics aren't clever. They're akin to a comic strip of Marmaduke just lying down asleep. The strips reserved for the holidays. Here are three books full of them, only with Brown's skill the strips work as jokes while retaining their poetic mundanity. 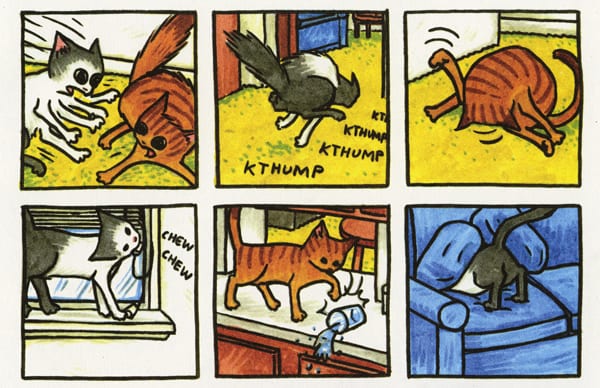 Cat Getting Out of a Bag introduces the exercise: observational comics coupled with drawings of cats from photos. These are hard comics to make, especially because the cats aren't given specific personalities. They just do what cats do. And how much do cats do? They sit. They purr. They lick themselves. They purr again. Humor strips always involve recycling the same relationship or scenario into a thousand variations, but they usually star characters that have character. Even Brown's photo reference drawings revel in their non-specific generic-ness. These photos could've been found in any yard sale picture bin. Their haunting charge is "observational" too: We're looking at Brown look at a photo of his cat. 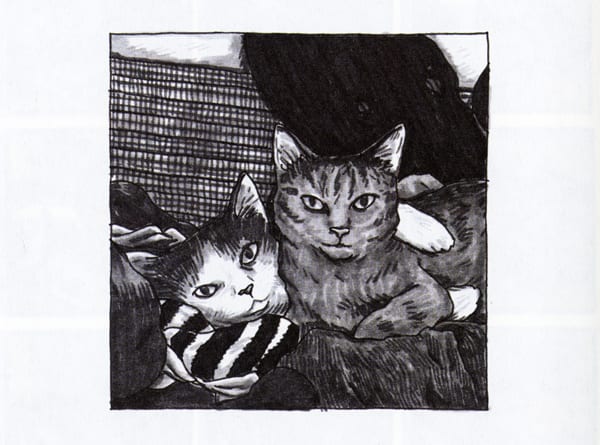 These photo-ref drawings serve as essential intermissions. Even a cat nut needs a breather. The gusto required to spend a couple hours reading about cats is tough to muster, and the thought "enough of this" deflates the enjoyment of any work, no matter how good it is. The strips are usually one page but they aren't consistently titled or divided, so sometimes what we thought was the end of one story is only half-way through a two page strip, interrupting our reading pace and pleasure.

However, with The Cutest Sneeze in the World: 30 Cat Postcards , Brown, or his publisher, Chronicle, found an ideal form for this work.

Cutest Sneeze contains the best Brown cat comics in the best format for them. They're physically isolated onto separate cards, eliminating the exhausted "enough of this" moment and the hiccups of reading confusion. In Cats Are Weird, Brown lapsed into a couple clever gags -- "Where a Cat's Center of Gravity Lies" diagrams? The "smarter" the jokes are the dumber the whole exercise feels. Those are weeded-out in favor of the best observational comics from the books, plus some new additions. Most revelatory is the conversion from the nine-panel grid of the book to the six-panel grid of the postcard size. This necessitated an editing of previously published strips.

Comics are notoriously frustrating to edit. Let's look at two versions of the same strip side-by-side...

The back-and-forth ping-pong action of a six-panel comic has an inherent comic timing. The nine-panel grid has a fat center to drag through. The same gags are, startlingly, funnier in their sleeker six-panel form. The "No biting the pen!" moment of the nine-panel version makes the ending more about the cat's inability to understand language. The two-column vertical format emphasizes the final panel's close-up more than the clutter of the nine-panel form. Even when converted to a horizontal six-panel format, the comics read easier than their nine-panel square versions. Could it be that rectangles are just funnier than squares? An unfunny, unfun person is called "a square." Or maybe revisiting and reformatting gave Brown the freedom to look at his old work with new eyes.

No characters. No story. The joy we get from these comics is born from Brown's ability to transmit his love of cats and extol the banal in well-executed gags. That Brown has created powerful, humorous celebrations of the mundane in the form of the queasily-commercial, CAA "cat book" medium is delightfully surprising and odd and funny, because it's true. 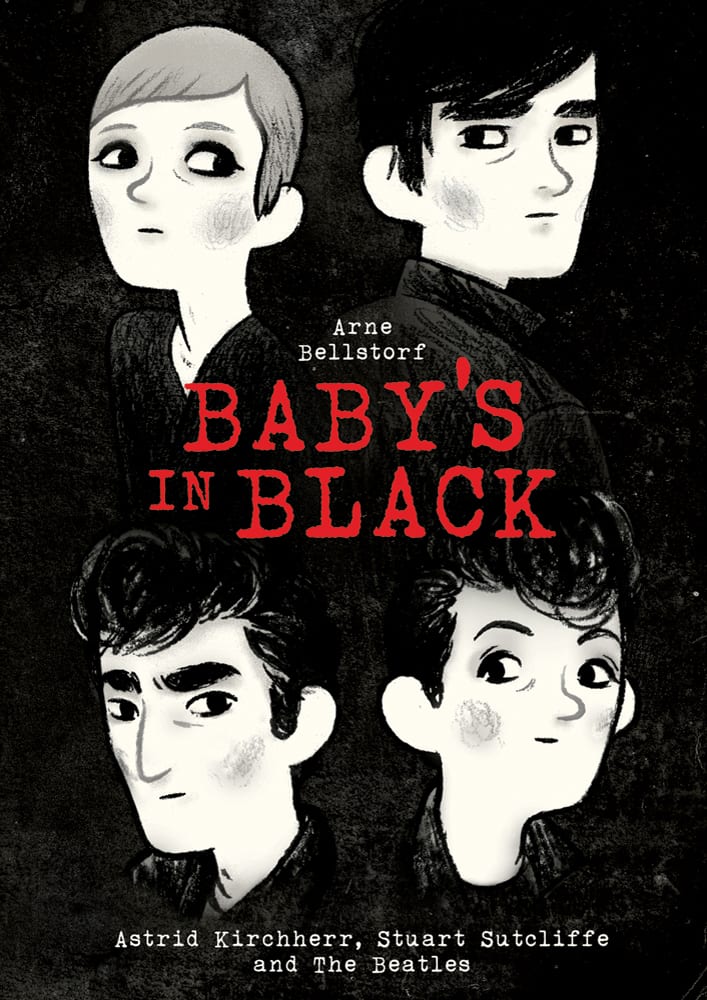 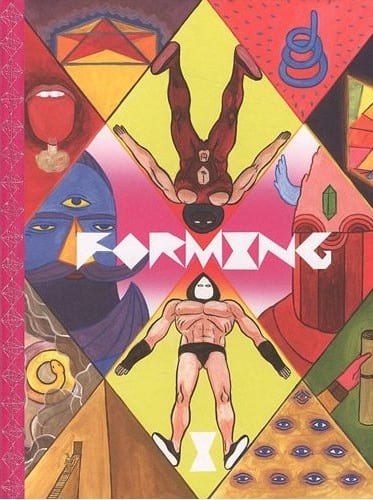