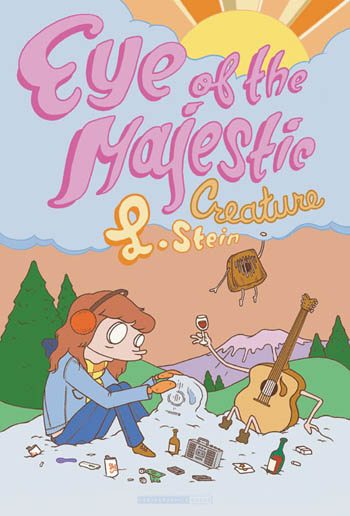 Eye of the Majestic Creature

You'd be hard-pressed to find a more downright affable character than blithely blitzed Larrybear, the young female focus of Leslie Stein's ongoing semiautobiographical comic, whose first four issues are collected here. When we meet her, Larrybear – or simply Larry – is living precisely the sort of bucolic back-to-the-country existence advocated by San Francisco acid rockers back in the sixties. No locavore pretensions for this laid-back, cheese-loving chick. Resembling an older, female version of Chuckie the Rugrat, Larry's happy just smoking dope, drinking wine, and contemplating the cosmos with her beloved housemate, Marshmallow, a talking Yamaha acoustic guitar.

Stein gives us the slackerly, star-eyed alternative to a cadre of "misanthropic, self-pitying comics about unappreciated cartoonists," as Tom De Haven characterized it in his recent review of Joe Ollman's Mid-Life. But where the aforementioned Crumb-descended misanthropes have all more or less grown up, Stein's Larrybear is a naïve woman on the verge of Whatever, a cute Candide floundering about in an increasingly complicated world. Even becoming a cartoonist would entail an act of radical ambition we can't quite imagine Larry immediately mustering in her magical-realist milieu.

Larry's serenity, however, is quickly scuttled by the appearance of Seashell, a hippie, dippy, mushroom-trippy Bay Area bimbette bearing tidings of Larry's ex. The news initially sends Larry into the first of the collection's many style detours, from light, lyrical line work into a sort of broken-fourth-wall realism. It also spurs her eventual return to New York City and consequent accrual of existential baggage and artistic detail (as though the two were inseparable). But first, some baby steps: A year into her solitude, Larry decides to make some friends in her community. In a thoroughly wonderful chapter titled "Reaching Out," she fashions a coffee cart and goes door to door. She meets a lonely housewife, who is married to an abusive marijuana grower, and an even lonelier thrift-shop proprietor in desperate need of female companionship. "So? How was it out there?" asks Marshmallow upon her return. "Oh, y'know," Larry replies, "it was just like life. You meet people. Some you like and some you don't, money changes hands and then you're pretty much back to where you started….Wanna play cribbage?"

Venturing further afield, Larry flies to Evanston, Illinois, to visit her divorced parents. In one of several stylistically eclectic vignettes that help make this book such a pleasure, while at the same time giving us a break from Stein's nine-panel matrix, Larry/Leslie lovingly describes her adolescent home, which her mother purchased from the lead singer of the Buckinghams. Larry catches up with her gentle, loving mother, who Stein draws almost as though she were Larry's younger sister; meets up with some friends from school, a gaggle of loutish party animals who take her several drinks over the line; and goes out to dinner the following day with her two brothers, their father, his second wife, and the girlfriend he's in the process of dumping. As a prelude and in contrast to the ensuing drama, Stein depicts Marshmallow waking up with a hangover, drinking his breakfast, browsing through Larry's record collection (Tommy James and the Shondells, Dusty in Memphis), and eventually passing out on the sofa.

Larry stays sanguine, somehow, and returns to the countryside with renewed gratitude. Soon, however, she finds herself back in New York, living with a relocated Seashell. Forced to look for work (Seashell sells magic mushrooms, naturally), Larry quickly stumbles upon what appears at first to be the perfect gig: covering small electronic items with Sworovski crystals. When asked if she has artistic tendencies, Larry replies in the affirmative, explaining, "I used to count grains of sand!!" Her supervisor approves. "Grains of sand, huh? Sounds tedious…You may enjoy this work after all." Suddenly Stein's flair for stipling makes perfect sense. Larry's right at home amid this slightly odd business owned by a celebrity hairdresser, carefully interpolating crystals by day and counting grains of sand by night (when not boozing it up with her East Village pals) until she develops an allergy to the glue. Fortunately, an even better job emerges at book's end as snow begins to fall like tiny grains of heaven. Larry has discovered another private space, where minor yet miraculous adventures will no doubt ensue. 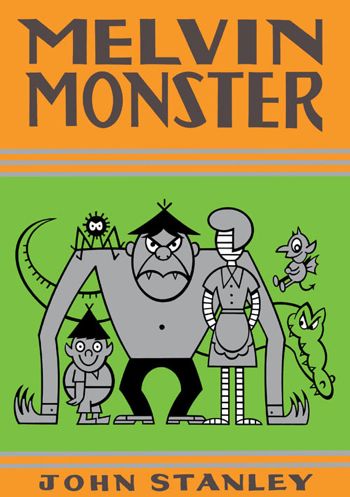