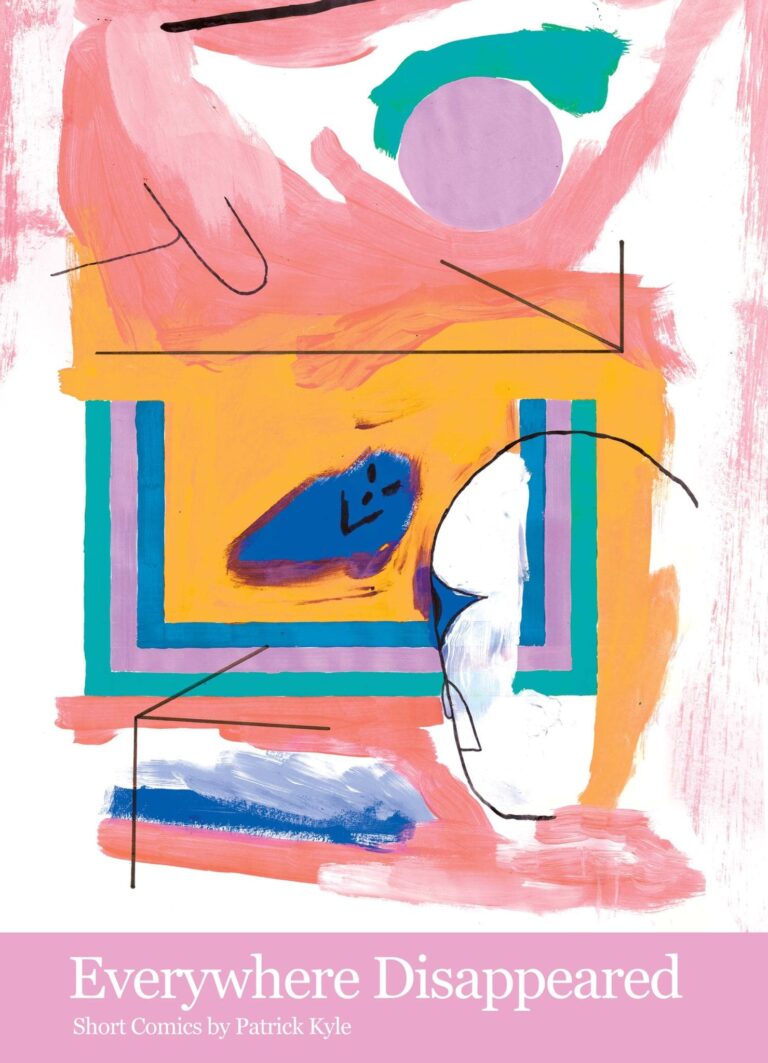 Everywhere Disappeared is a collection of Patrick Kyle’s short comics from 2013 to 2016. When I reach for Patrick Kyle, I'm looking to really gnaw on the choices he makes for using space. Kyle uses each page as a whole composition in a way that grinds against classic comics grammar. Characters will step over and through panel boundaries which are left unfinished or splintered. Frequently, Kyle respects no kind of gutter between panel border, or the border is made of black lines so thick they are their own gutter, too, neither of which necessarily separates units of action on that particular page. Add to that his lexicon of little recurring symbols across stories: a series of rectangles framing other rectangles, spider webs, collections of parallel lines, circles full of drippy organic textures. Sometimes they serve a direct story purpose, and sometimes they're a decorative element that seems added just because it was fun to draw.

A palpable joy in the act of drawing is consistent throughout Kyle's work, and it's invigorating to look at. Linework, after all, is just another way of tracing how a mind thought about something, and Kyle's mind chooses just what's needed to propel the story, then embellishes the rest or not, seemingly at a whim. When a character needs a hand and arm to pick up an object, that arm and hand will appear -- frequently exaggerated to maximize visual effect -- and as soon as that hand is no longer needed, the next panel will show the same character as a torso with feet. Why waste time on the uninteresting when your reader will fill in missing arms for you? It's the same principle that saves comics artists from drawing every single frame in between two panels, and Kyle experiments with the mind's ability to fill in gaps on figures, faces, even the physical spaces the characters reside in.

How do we know where a unit of comics begins and ends when the boundaries are so readily violated? One thing paneled comics train the eye for is knowing what scale to take in the image -- is this a splash page with a single image in one instant or a highly fragmented 64 panel page? Kyle instead regularly blends and blurs the comic space so a single page of what appears to be a single image actually features multiple characters saying and doing multiple things at once, all overlapping. He presses this extreme even further by frequently drawing his characters interacting in this blurred non-delineated space with a deliberate lack of perspective or space. In one story, a group of identical builders is constructing a parthenon in a space that exists as pure decorative clutter. There are simple shapes, swirls of ink, vases, and spider webs. When something from this vibrating collection of stuff matters to the story, a character announces it. A boulder (represented by one of his circles of drippy organic texture) comes free and falls to hit a builder. How can falling be represented on a page that has no depth or height? Easy: just like the hand appearing when needed, suddenly Kyle gives us a cleared space, a motion of falling and the word "Fall" written as matter-of-factly as can be. 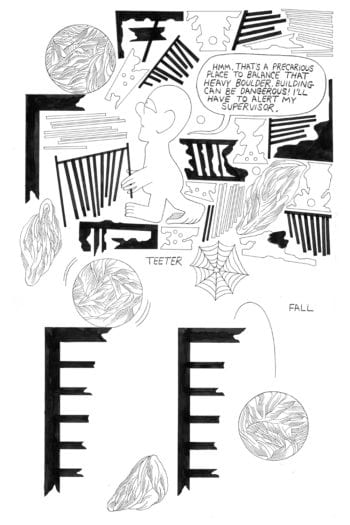 We know the boulder is in danger of falling because a builder announces "Hmm, that's a precarious place to balance that boulder." This is probably as good a time as any to talk about the dialogue Kyle deploys. Because of all the spatial trickery in flat space and characters that may or may not choose to have identifying characteristics, Kyle's dialogue winds up doing a lot of work. It moves the eye through the page's composition. It helps break pages into panel-like units of drawing that represent a single moment of action. It also defines character, often by a character announcing with great simplicity who they are and what they are doing. This might be the thing Kyle's work does that has the most in common with classic superhero comics: in the same way squeezing a word balloon in where Spider-Man announces just how hard he's punching The Rhino's skin to no avail and it makes up for not being able to draw the action at the level of detail described, Kyle can pull off lines like "I'm the creator of the smartphone. No one truly appreciates my contribution. I'll go into exile and take my secrets with me." A line spoken in direct address to the reader, by the way. Direct statements are delivered with the flatness of Kyle's space, but communicate just what is required. What's more, like the boulder's fall, Kyle can shift into more poetic dialogue, snapping the words into emphasis from the direct delivery. "Failure is embarrassing. I must remember to only try what I know," a man says to himself after attempting a dance (the dance consists of simply lifting his left leg, then his right -- dancing is conveyed, no other information is required).

These are short comics bound together that were produced over a number of years, and full of a continuous experimentation with these elements of speech and space and detail. How many different kinds of lines can overlap before you can no longer parse the intersecting pieces as separate characters? How can identical characters as drawn produce different characters as read? Some pages are wholly non-narrative, just riffing and collaging pieces, developing the symbols in his personal language up from repeating drawings of hands or shapes. He clears space on the page, he overwhelms the page with more.

Two stories in Everywhere Disappeared feature men living in fantastically opulent apartments high above the city. In a third, a man lives in a cell with a tightly constructed schedule of activities and mysterious observers of activities. But Kyle draws all three men living in tight, nearly blank cells. Extracted from a more populated reality, these men communicate through letters, phones, or slits in the wall. They are sealed off away from Kyle's chaotic organic spaces in clinical cells, describing their own actions to try to communicate something, forced to relate with the reader even after leaving the world. They remain confused, afraid, and incomplete. The clean, consistent self can never be achieved. Clutter and consequences emerge regardless. 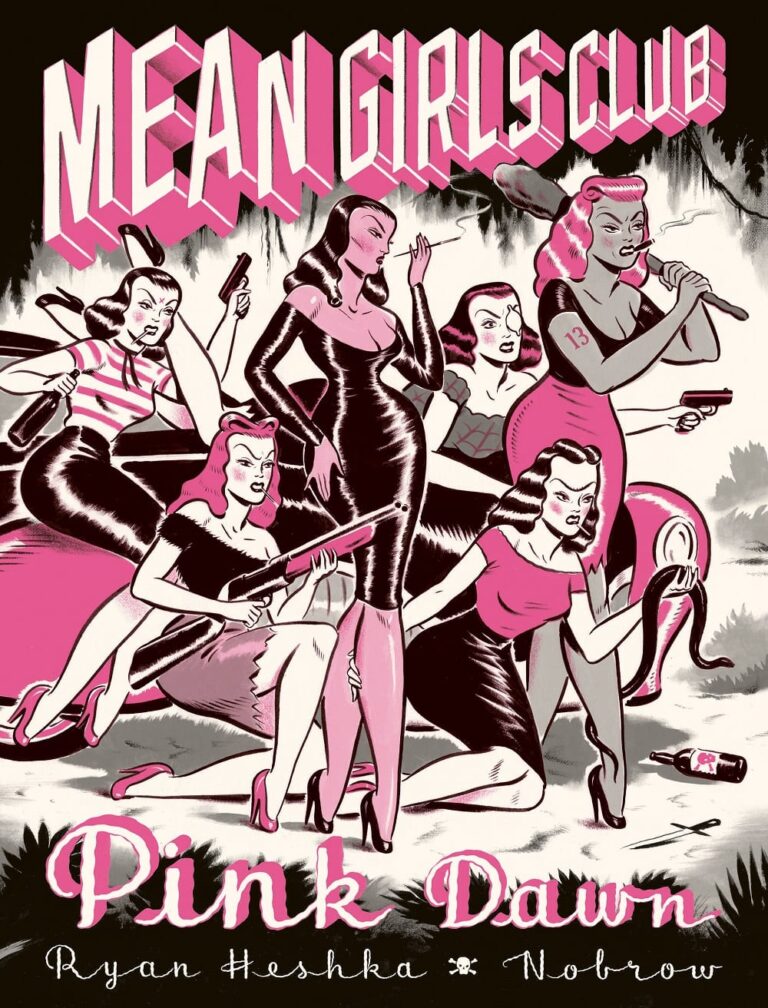 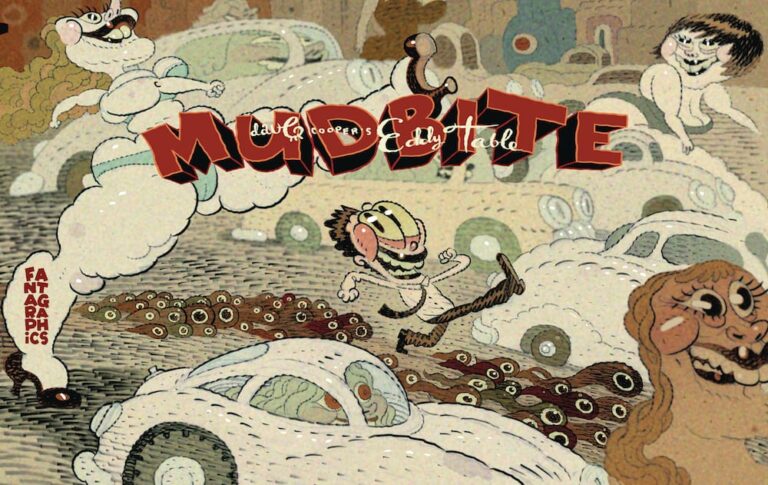