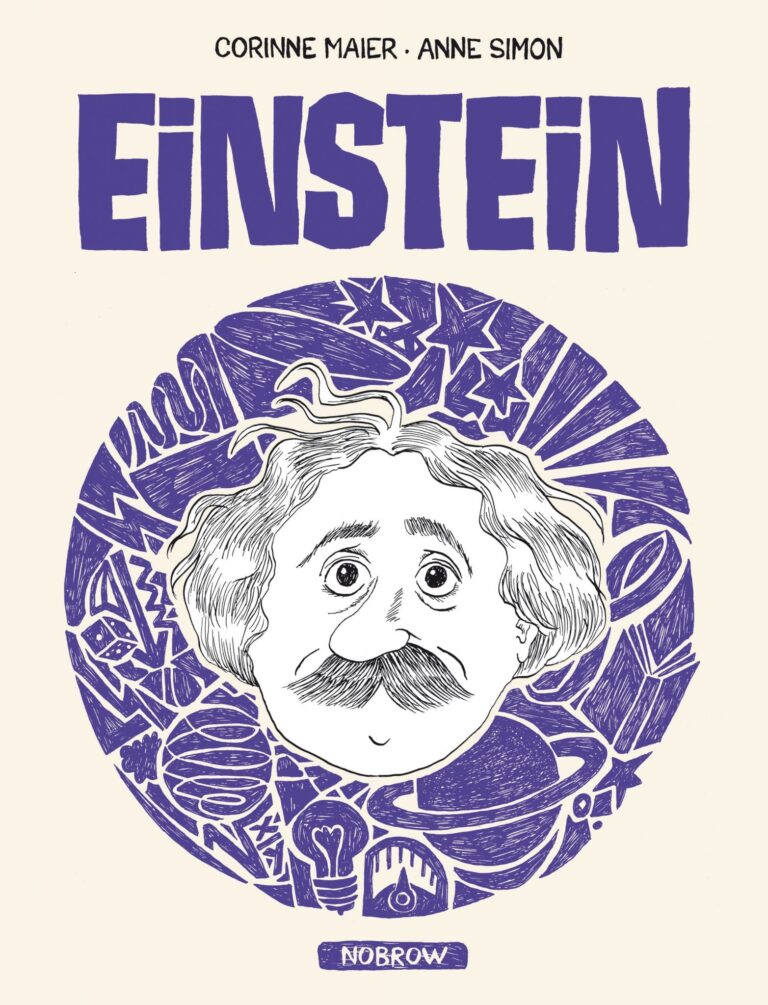 Third in a Nobrow series by the same scriptwriter and artist—following similar-format works on Freud and Marx—this one may be the most successful. The drawing is crisp, the explanations are suitable for teens and adults alike. But what makes it so good?

Since the distant days when Chomsky for Dummies sought to explain difficult ideas to popular audiences through an acute combination of art and text, comics have come to be a natural medium for scientific explanation. Indeed, Logicomix, the somewhat fictionalized biographical treatment of Bertrand Russell and his philosophical theories of math, proved a surprise bestseller a half dozen years ago. No others in the scientist-biographical category have been so successful, but as science, math, and the universe continue to get the comic treatment of various kinds, further experimentation is obviously ongoing.

This reviewer, an old-time historian of the Left, asks himself why Einstein is superior to Marx, the comics version of one famed Central European Jewish socialist over another. Most of Marx ended up treating his social life as radical exile, impoverished father and husband (very occasional adulterer), leader of the First International, and so on. The “Marxist” theories toward which he devoted his ardent energies got pretty short shrift. In fairness, such ponderous subjects as the Left Hegelianism of the young revolutionary romantic would prove daunting to any comics treatment. 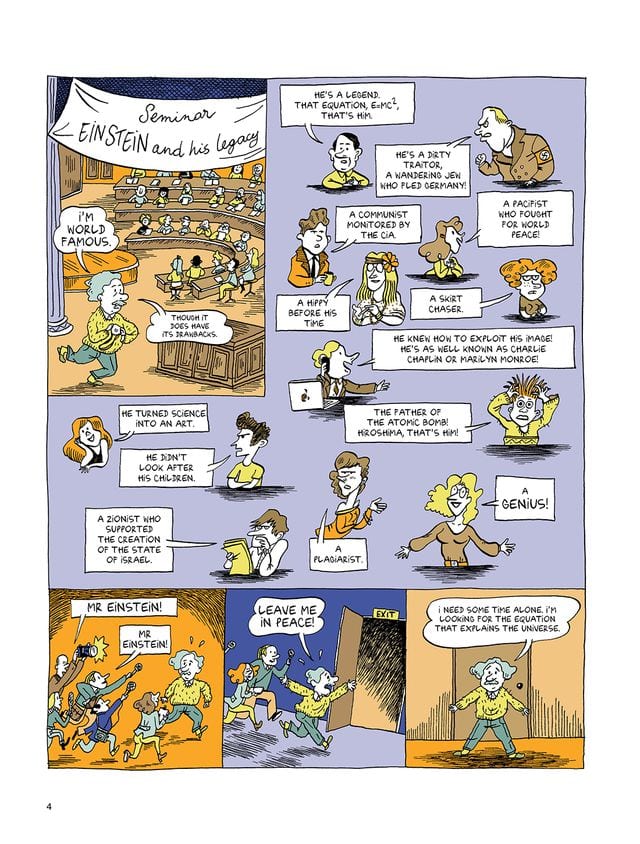 Somehow, Einstein’s theories lend themselves more readily to artistic exploration. The imprint of French modernism emphatically continues from the pages of Marx, touches of what could be taken as Bretcher, Doucet and Gotlib, with a color scheme that could, again once more, hint at children’s books. The unique achievement of Einstein is pronounced in the intermittent, highly imaginative pages about an affably caricatured Einstein himself, on an Infinity loop across space and time, or wandering in his mind through assorted dimensions. Thereby, the reader is led successfully toward the scientist’s grand perspective.

Not that Einstein’s personal life, as presented here, is either absent or lacks charm. Far from it, on both counts. Perhaps the surprising element in Einstein will be the revelation (to most readers, at any rate) that he was sometimes seen by his parents or other adults as a dull boy! He disliked the discipline of the primary school classroom in his native Ulm, Germany, and began to find his place only when his father, an inventor, established an electrical production firm. No matter that “Einstein Co.” proved a financial failure. Albert was too young to have taken part, anyway. The idea of science and engineering was in the air in contemporary Germany, and Einstein manages to convey the socioeconomic atmosphere in such a way that the emergence of some such young genius seems almost inevitable.

Young Albert, in the Maier and Simon version, actually has many interests, playing Mozart on the violin high among them. Science of assorted branches clearly won his young heart, but he was rapidly developing another, very different attraction. Einstein emerges a lifelong skirt-chaser, although he clearly had an appeal and did not need to chase too hard. We can still be shocked by the antics of the twentieth century’s greatest scientist! And it’s funny. 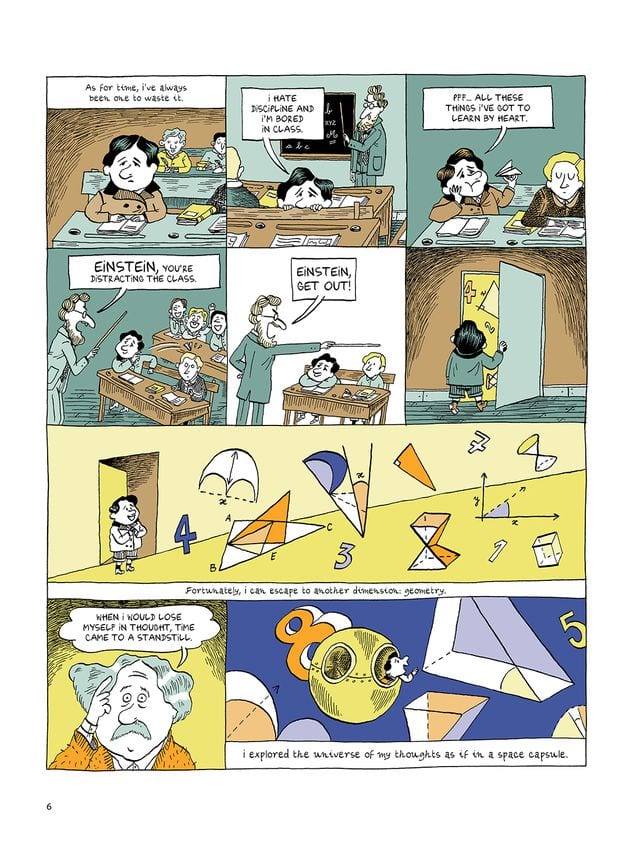 Women who he met him casually, when his family moved to Italy, seem to have offered Einstein the earliest in a lifetime of amorous pursuits. Back in Central Europe, he got a science degree, a job, and a wife. So devoted was his Mileva, she bowed to his wishes and gave away their first child, a daughter, so as to allow Albert an undisturbed life. (They never spoke of it again, perhaps the worst thing that can be said about Einstein’s character.) Then he lands a job and Swiss citizenship. Soon, the married couple have (and keep) a son. Albert is by now working along on photo-electric effects, matter treated by light radiation letting off electrons.

If Einstein had been religious rather than an atheist, would he have pushed ahead with such confidence? The question is implied intermittently, or perhaps the answer assumed as we go along. He reconciles the heretofore unreconcilable, light and matter, electromagnetics and mechanics. Thus the basis for relativity is established, with time and space relativity. And thus all those sci-fi television shows and films from the 1950s on: people returning from space have not aged as fast as those who remain behind-- admittedly, the differences were vastly exaggerated, for dramatic effect.

And thus E=MC2, with energy equal to the mass multiplied by the speed of light, squared. Everything has or is energy, a theory more or less anticipated by Jakob Bohme, the seventeenth-century German theologian, considered the father of dialectical thought, thus also godfather to Hegel and Marx.

Ensconced at the Institute for Advanced Study in Princeton, a great public personality, quiet womanizer, and equally quiet socialist, Einstein penned a remarkable essay titled “Why Socialism?” for the first issue of the leftwing journal Monthly Review, 1949. But we are getting ahead of our story. 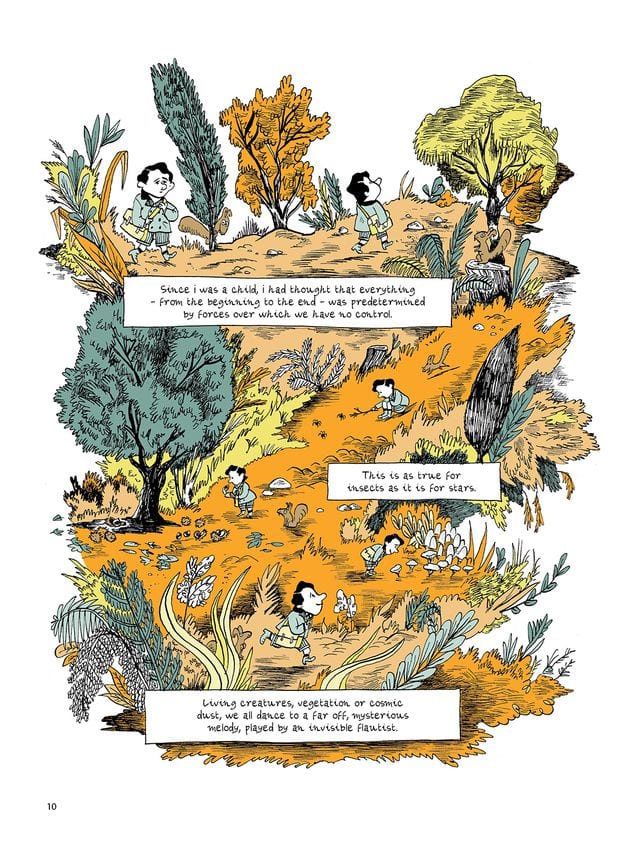 Einstein suffered extreme disillusion at the outbreak of the First World War, especially at his fellow scientists who seemed to have no problem with vast, mechanized murder. As he envisioned the universe ever more clearly, anticipating theories ranging from the Big Bang to Black Holes and beyond, he saw the storm clouds gathering in Germany.

The artist-writer team of Einstein illuminate, in passing, useful analogies of the great scientist to Arnold Schoenberg, Marcel Proust, James Joyce, Henri Bergson, Friedrich Nietzche, and Pablo Picasso, all close to being contemporaries (Nietzche coming a generation or so sooner) in breaking existing assumptions about almost everything. These luminaries could be called Deconstructionists, albeit without the title. A bit of a leap for text and image, it’s a fine point and the book uses comic art to make it well. Likewise, his rivalry with fellow scientist Niels Bohr, his departure from Hitler’s Germany, and his celebrity-arrival in the US, all achieve here an almost humorous treatment that offset the sometimes egotistic, often tragic reality.

The development of the A-bomb, Einstein’s unwillingness to take part even to stop Germany, and the growing suspicion in Cold War America that he must be a Red—all these weigh heavily on Einstein and almost as heavily on the book. He joins Bertrand Russell at the World Peace Congress in 1949, and together the great intellectuals speculate, as if it were a consolation, that the destruction of humanity will be met with disinterest in the cosmos. Our problems are too small to matter, after all. Einstein’s life is slipping away in the early 1950s, which has the makings of a gloomy conclusion for the book. Einstein shows quite wonderfully, in a full page drawing, that our visionary still exists in another dimension! Because, naturally, nothing is ever really lost.

No book can do everything with such a life. But this is a job well done.##

Paul Buhle’s Johnny Appleseed, Green Dreamer of the Frontier, drawn by Noah van Sciver, is due out in October from Alternative Comics. 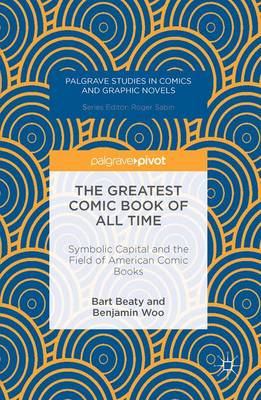