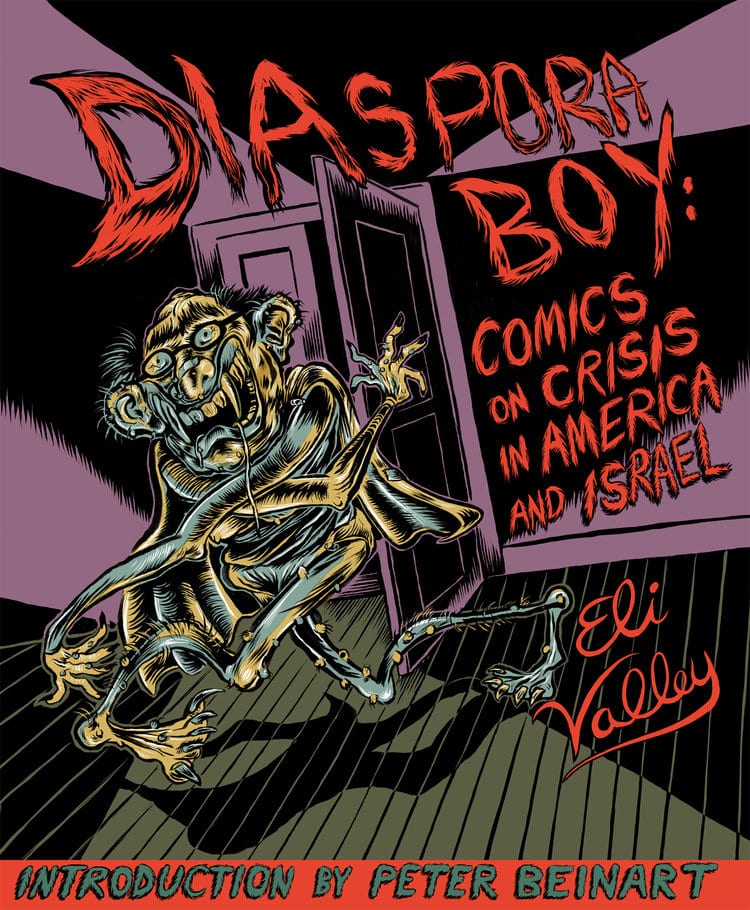 Eli Valley has been torturing tribalist, Occupied Territory-seeking Jewish neoconservative and neoliberal hawks for about a decade now. His art style is utterly unique, a combination of cartoon and comic art all mooshed together, with odd items galore. If many readers miss a detail or two (or three) in this delightfully oversized volume, it must be on account of the dense content and story line, ruthlessly moral in an immoral world. Peter Beinart, a Jewish commentator who moved leftward after becoming famous, says in the preface that if the cartoons in this book are “outrageous and absurd,” it is because we are living in an “outrageous and absurd moment in American Jewish life.” That is: the language of American Jewry remains overwhelmingly liberal, but the silence over the cruel reality of the occupation of the West Bank is deafening.

Beinart calls Eli Valley’s work a “searing indictment of the moral corruption of organized American Jewish life in our age,” on the face of it a pretty shocking observation. With a kicker. The book is also... the Eli Valley Story. As you might have guessed, reader, Valley is the son of a rabbi, who grew up with all the imagery of the Jewish diaspora, imagery full of righteous suffering and return to the homeland in apparent triumph, ever-insecure triumph.

Actually, the story is more complicated and also more interesting. His folks’ marriage broke up, the kids moved out with mom, and we can even find a photo of her looking, somewhere in the 1970s, like Joan Baez, guitar and all. One fine, progressive secular Jewish parent is more than many Jewish Americans are lucky enough to have, but when pubescent Eli visited dad in his lair, that is, his congregation, he was bound to have an unsettling experience, as Valley explains with wincing humor. He was not going to be a good Yeshiva boy; but the pageantry, with its ancient echoes of identity, could not leave him unmoved. 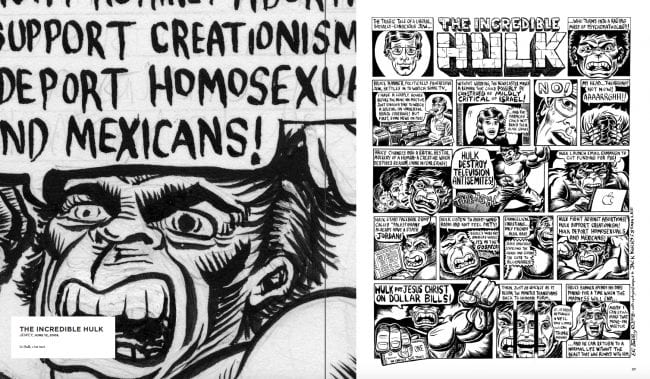 Thing is, that identity had become embedded in identification with Israel the State. The resulting narrative, imbibed by but also instinctively rejected by the artist’s young self, set “assimilation” as an Enemy almost on the scale of the Holocaust, practically. Only the Jewish State guaranteed Jewish collective identity and, for that matter, genetic identity, into the centuries or eons of the future. That Jewish State was always, at any moment, in existential danger. No enemy, not even the Iranian leaders who proclaimed extermination of Israel, embodied the danger as much as the impoverished, beleaguered Palestinians on the West Bank and in Gaza. Were Israeli hospitals, for instance, actually staffed by Palestinian Israelis? Well, yes, but so what? They might harbor resentments at their third-class status as citizens. Worse, they might feel forbidden sympathies for West Bankers.

There’s the problem in a nutshell, if a nutshell can surround a problem this large, complicated, and overdetermined. Valley’s comics, mainly ridiculing the spokesmen of the Jewish power brokers in the US, also offers us precious gems of tribal nationalism from his own experience. For instance: a “hotline” set up on Israeli television in 2009, for the purpose of reporting Jews anywhere in the world who were judged at risk of assimilation. The cure? A visit to the homeland. The TV ad featured train tracks inevitably suggesting Auschwitz ahead for those who would avoid difficult truths: assimilation as another version of Holocaust, making intermarriage an ominous step up onto that moving train to extermination.

The well-known fact that only a minority of Jewish Americans actually hold such opinions does not deter Valley from his satirical goals, and for good reason. The big guys with the money run AIPAC and other such organizations, never far in mentality from the Anti-Defamation League under its long term leader Abraham Foxman, and the same big guys give the biggest donations to Republicans and pliable Democrats. They demand submission and they get submission.

It gets worse. As Valley says repeatedly through prose and art alike, Jewish criticisms of human rights violations on the West Bank are widely considered, not only by conservatives but even by political liberals, to be a form of self-hatred. Each and every Israeli war, invasion, and occupation of a neighboring country —Lebanon, invaded and then occupied from 1982 until 1997 offers quite a case in point — is and must be an “existential” act of collective self-survival. Self-survival, that is, not only for Jewish Israelis themselves, but also for Jews across the world, whether they actually feel an emotional attachment to the Jewish State or not. 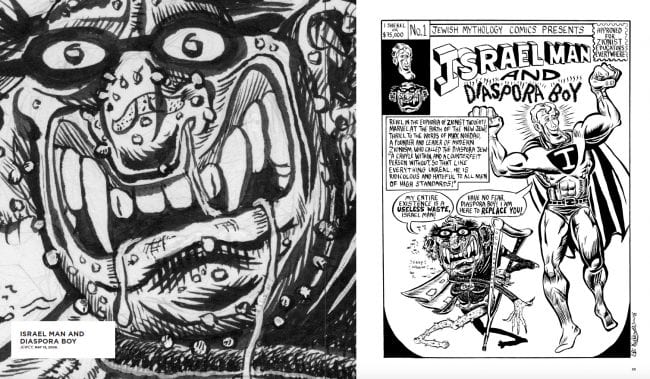 Valley inevitably pokes at liberals quite as much as (neo) conservatives. The liberal view that “land” (some part of the West Bank) must be traded for “peace,” that is, a definitive end to threats, stands alongside a sentiment that in some way, the West Bank really is Jewish by right, and concessions must be counted as merciful, not merely practical. The Palestinians are at fault, then, because they are said not to agree to the existence of two states side by side; but they are not actually entitled to one of those states. They are stateless except through benevolence, a benevolence that can be withdrawn at will. If and when the Occupation becomes Annexation, as now seems increasingly likely, the existential threat shifts to the physical presence of Palestinians themselves, certain, if not somehow stopped, to reproduce more and more Palestinians in generations to come.

This perfectly crazy logic makes for a great deal of humor, a large chunk of it conveyed at a highly personal level. Mom was the kind of divorced Jewish lady who kept a paperback Joy of Sex on the bookshelf at home, about as great a contrast with his father’s domain as one could imagine. Valley discovered Mad Magazine, and with it, a world of his own: art and politics. Redemption, even. Mad, which descended from its 1952-55 peak as Mad Comics, had lost a lot in the process, including the crowded panels with Yiddish or quasi-Yiddish phrases, glimpses of the 1930s Bronx and such. And yet Mad the slick magazine, remained a definitely Jewish magazine without an explicit subtitle, offering the Outsider’s view on modern madness, and now and then even the peculiar Israeli madness. 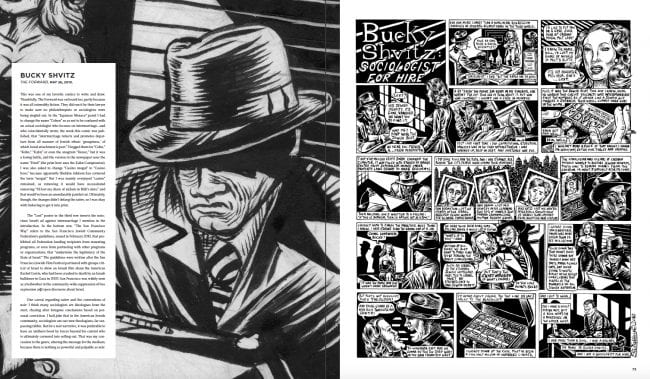 It is easy to read Diaspora Boy as a bigger, tougher version of Mad, closer to the intensity of Mad Comics than its successor. It is also easy to read Diaspora Boy as a running commentary on the many incidents in Valley’s life since his teen years, watching assorted developments with dread and responding, in a Dr. Strangelove way, with extraordinary humor. The grotesquerie is extreme, and hardly ever ceases to be extreme. This is not humor for the weak political stomach. And yet parts of it appeared in the Jewish Forward, amazingly enough, in the Nation and even the New Republic (whose 1980s owner would surely have drawn back in extreme horror, and issued commands), as well as with the Israeli peace movement publication +972.

No one is spared, not even the sainted Elie Wiesel who, truth to tell, was the sponsor of a West Bank settlement in East Jerusalem and ally of some of the most rightwing Israelis, and thus not really quite so saintly. The deeper truth here is one that Art Spiegelman made in Maus, about his own father, an unpleasant survivor in so many small ways: suffering, even the most extreme suffering, does not necessarily redeem the survivors, who may not have been either kindly or egalitarian before their suffering.

It’s a hard truth that runs through this volume, and carries an even larger message that belongs to the artist quite as much as the political critic. To imbibe this truth fully demands immersion in Disapora Boy. Reader, look for this volume and dig in. 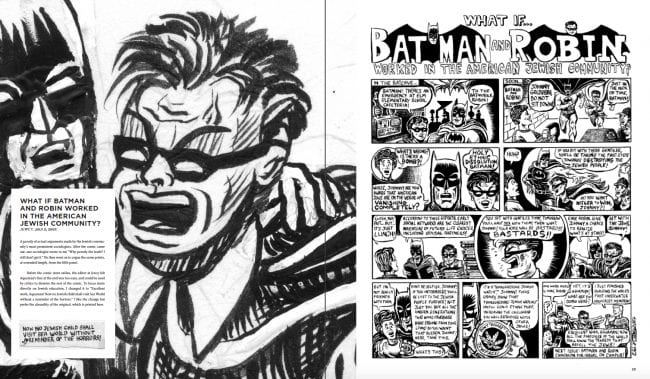 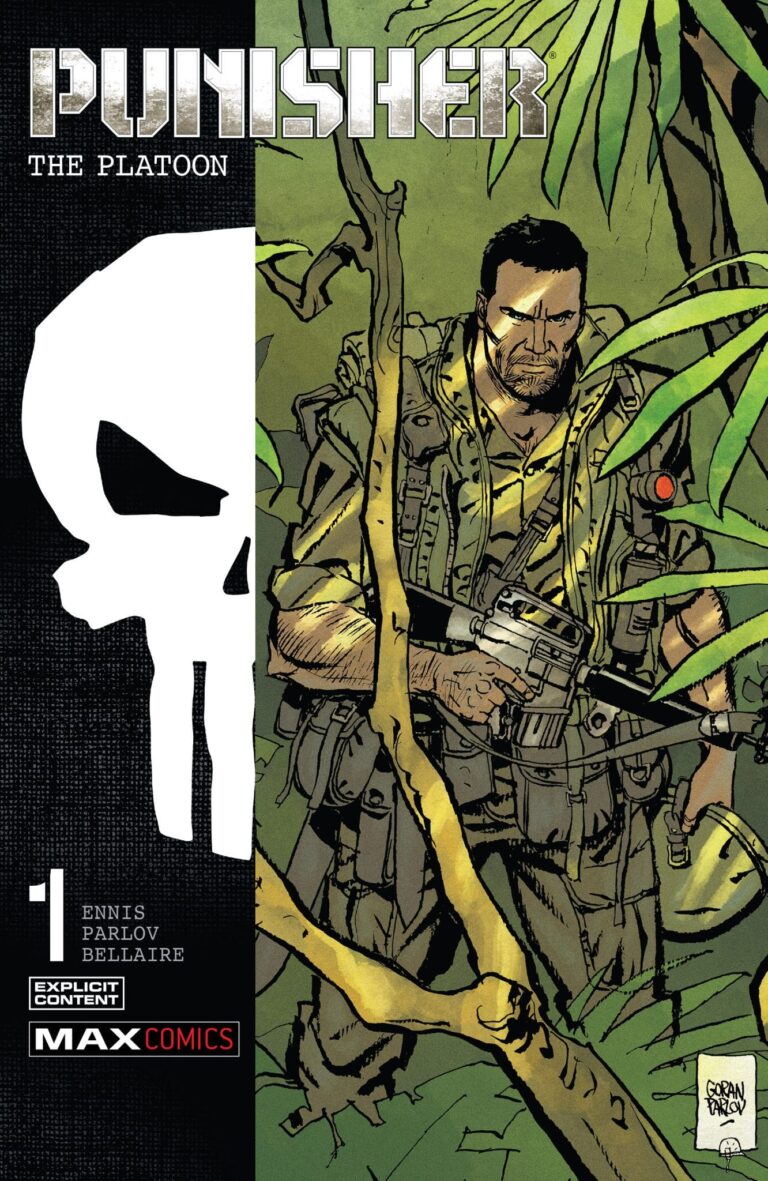