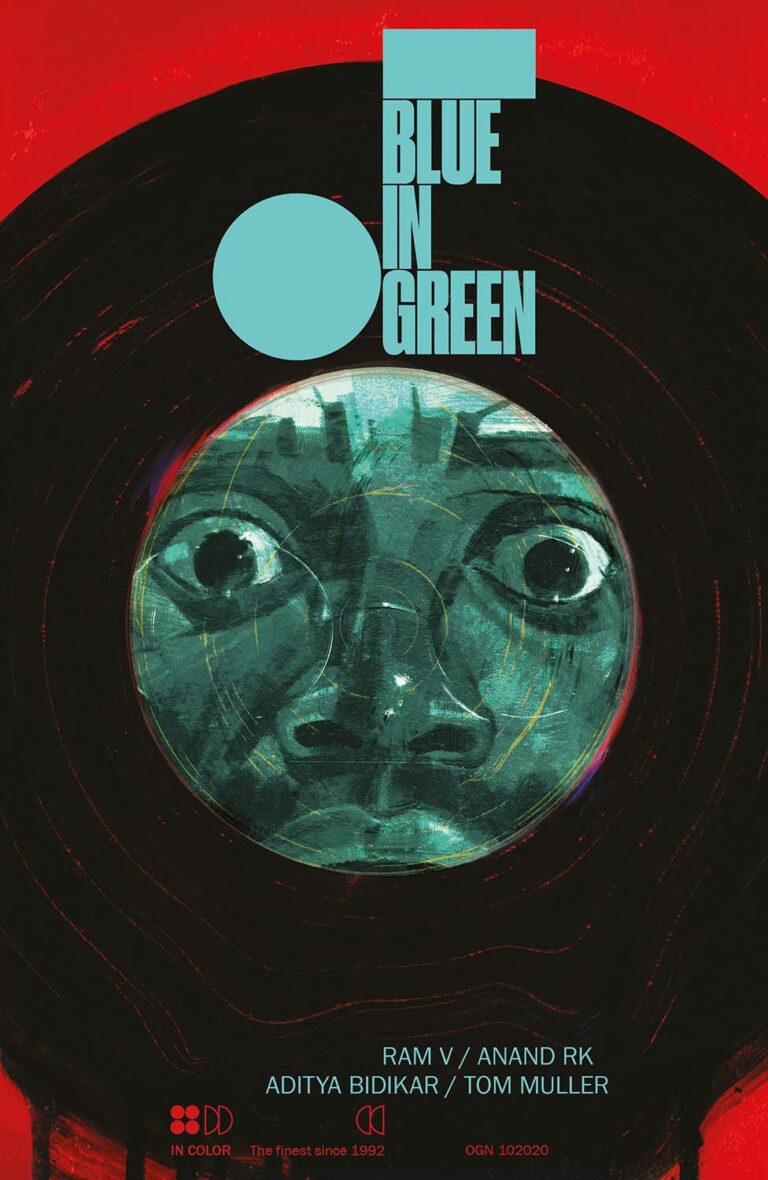 Ram V and Anand RK’s second original graphic novel together, last year’s Blue In Green, newly in its second printing, with an Eisner win for the art team, uses jazz and death as a counterpoint to their first book, Grafity’s Wall, a hopeful story which saw four Indian teenagers come of age through artistic expression. Now, we see what that same young passion can turn into: all consuming monsters, hiding in dingy clubs, in the shadow of history.

Erik is a saxophonist, a down-on-his-luck music teacher in New York who longs for more. After returning to his childhood home for his mother’s funeral, he finds a photograph of an unnamed musician amongst his late mother’s possessions. This picture is accompanied by a ghoulish visitation and a burning need to find out who this musician was - a need to fill the gaps in his understanding of his distant mother’s life. This is a quest that leads him to the musical success that he was missing but also into a land filled with obsession, with demons that consume you from the inside out.

He moves through the old places of New York’s jazz scene, now dilapidated clubs guarded over by a few living veterans, with the ghosts of the dead trapped inside. Seeing flashes of past passions and lives compared to a downtrodden present. As Erik is visited by demons and ghosts, he gets the chance to gain the material success of his dreams, by giving into the devil.

In Grafity’s Wall, Ram V and RK show kids creating art that lives beyond them for the first time. The title of that book referred to a bit of wall left in the rubble of a demolished slum that the kids used to express themselves, spraying graffiti on it while hanging out. The wall outlives the story. Seen in the epilogue, it is integrated into the posh development that bulldozers were clearing the way for. It survives because of the art the kids made, but it is also trapped, made static, where before it was in constant flux. 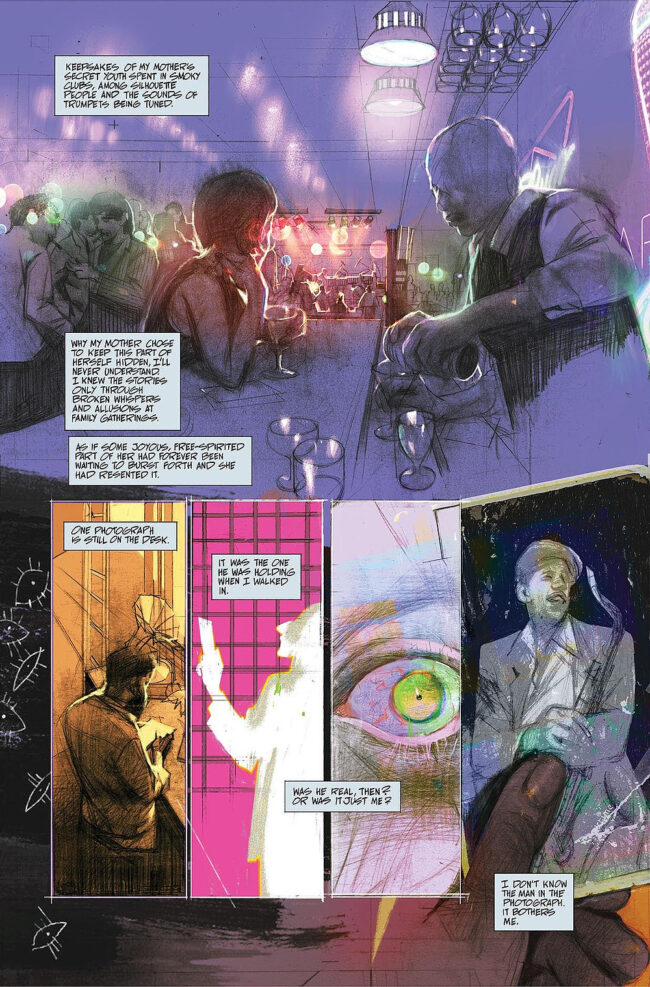 Blue In Green shows us what happens afterwards. When something expressive and fluid, like graffiti or jazz, lives on past its progenitors but becomes trapped in unnatural confines, forced to be still, it haunts those that find it. In a remarkable transformation, RK’s art is very different in the newer book, swapping definitive but jagged lines for a alluring looseness. Slippery instead of firm, you tumble through the panels and pages, further down the hole that traps old music and its protagonists. The style gives the art an improvised feeling, bouncing from page to page with a fluidity like the music it depicts. John Pearson’s colors add a sickly texture to RK’s work, dark and muddy with occasional bright flashes cutting through. Together they make an exciting, dirty mess, the smokey aftermath of an accident that you can’t look away from. The art is the thing that strikes most strongly when opening the book, it’s hard to look away from. 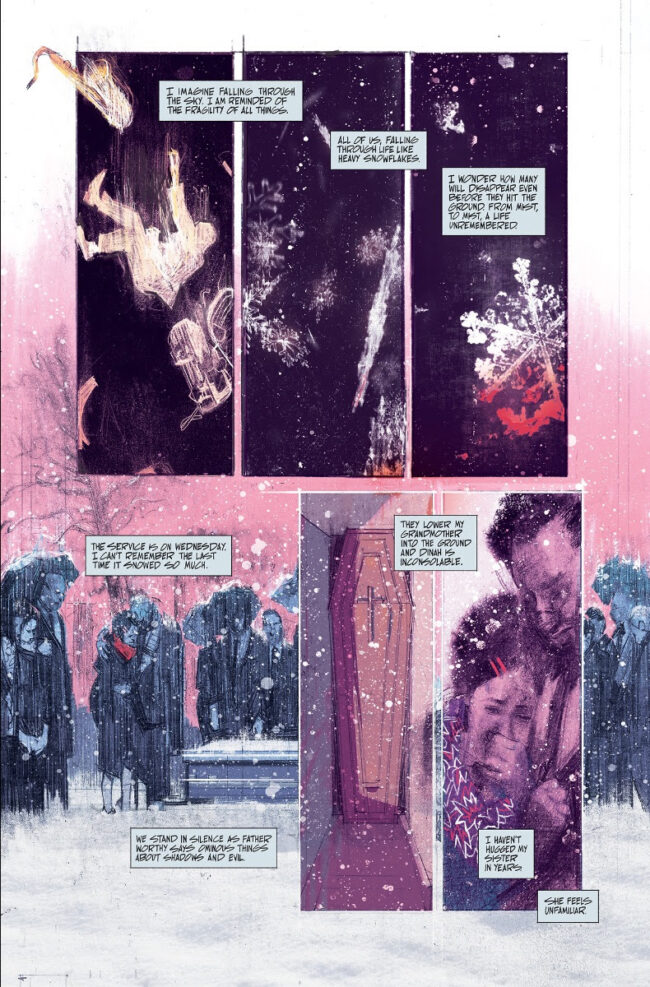 If RK and Pearson deliver unstable artistic chaos, the rest of the team are there to help to steady and guide us through the book, remaining consistent throughout (maybe too consistent in the case of designer Tom Muller, where his handful of colorful circles and semicircles on the inside and covers become less interesting each time you see them). Aditya Bidikar’s hand-written letters are compressed, slanted, fast, their speech bubbles sharp edged but unassuming. The lettering reflects the chaotic art while also remaining the same throughout, grounding the uncertainty, resolving itself to the chaos and finding comfort in it. This is perhaps part of the nature of lettering, that it’s important that it’s clear and consistent across the work (else it would be hard to read the book), so even if it chooses jarring shapes for the bubbles, for example, it soon fades into safety as you become acclimatized. I don’t say that as a criticism, in fact, I think in Blue In Green it adds to the experience, as Erik gradually finds what he’s looking for within the haunted world of old expression.

Ram V’s story is strong, with a clearly drawn protagonist, building on themes of creative expression, family, and places, that he’s touched on in previous work, with a rhythmic flair that ebbs and flows in line with jazz and his collaborators. This time things are older, more defeated, there is no hope here, only desperation. That desperation for musical success and for a lost maternal connection, is preyed upon by dark forces in the story. As Erik gets what he always wanted through a deal with the devil, to successfully perform, he gets visited by monsters in dark corners, ghosts left over from others who already gave their all to perform. Erik is thrown into a cycle of performance and death that is inescapable even after the point of death.

The story is fairly basic. What makes Blue in Green stand out is the jazz of it, the chaotic, fluid melody of the art. It makes the base of the story feel fresh and almost playful in its darkness. 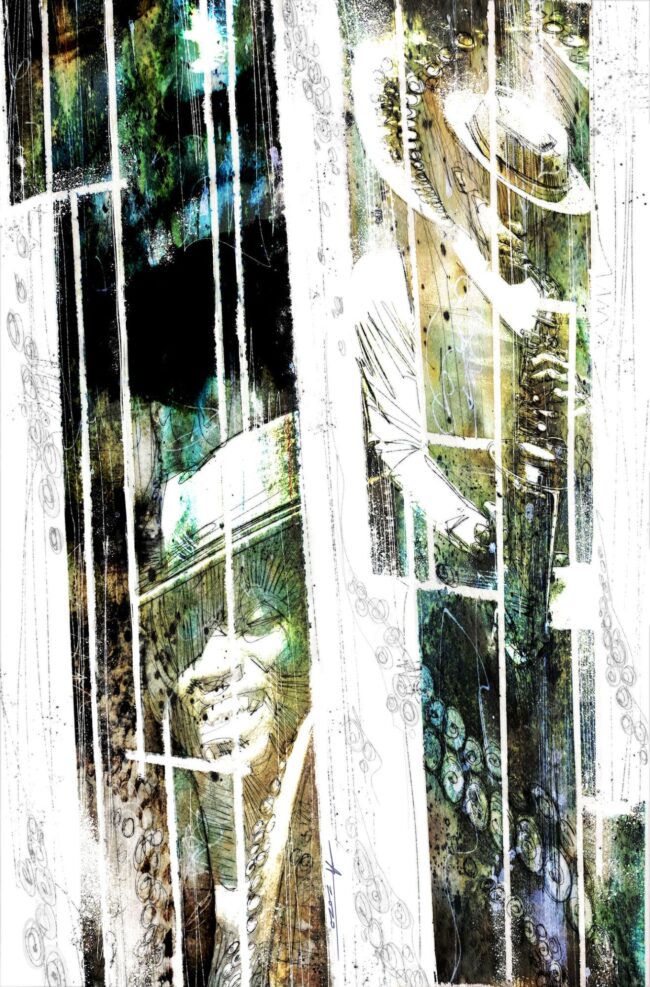 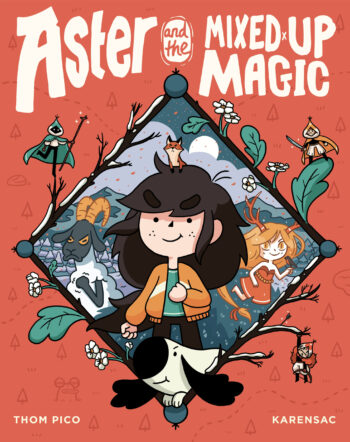 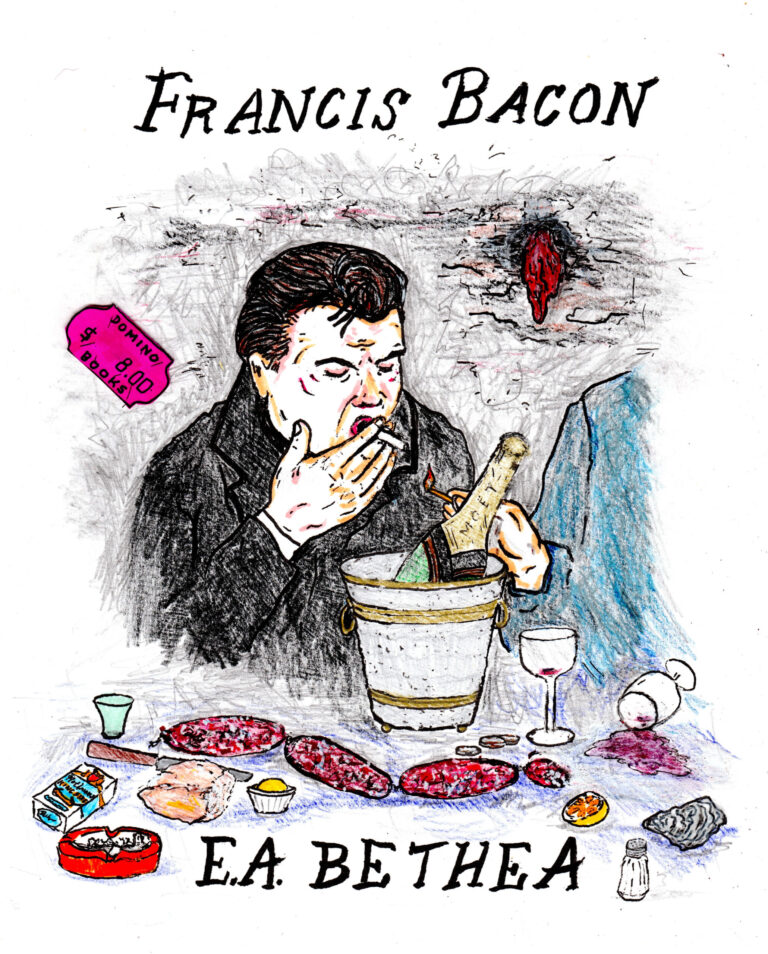