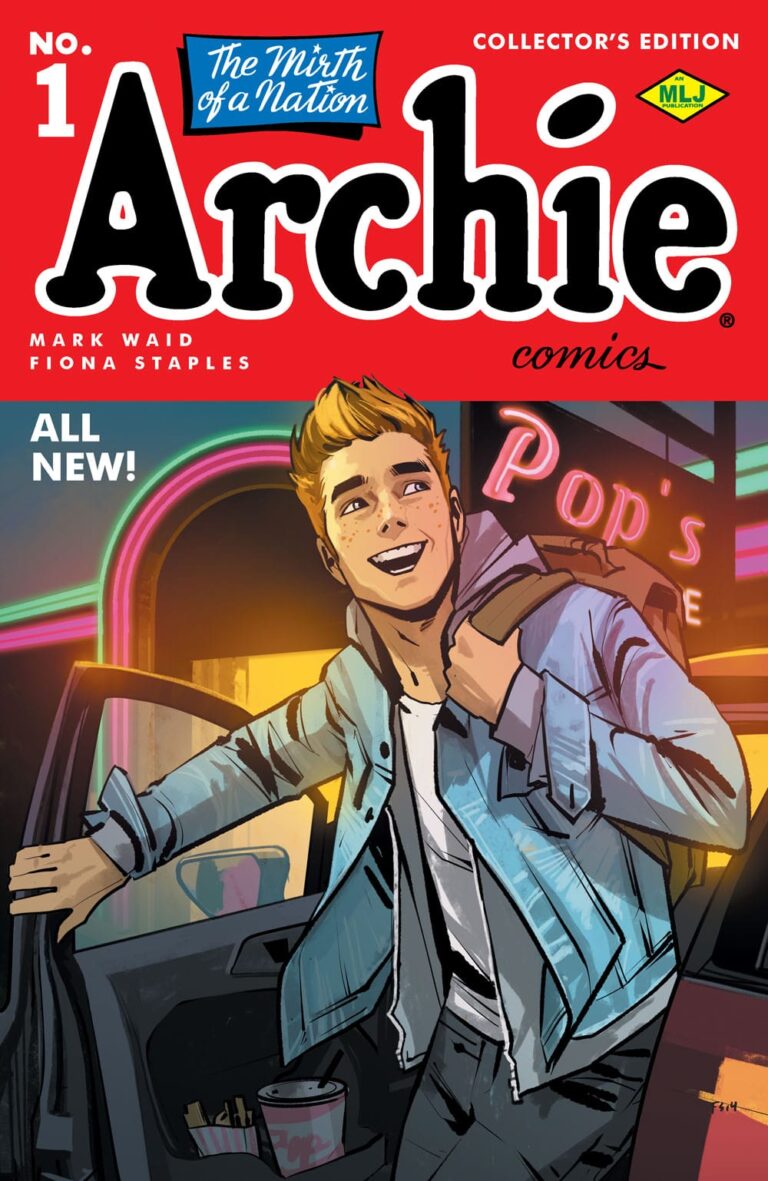 Unless you’ve worked at a comic store for at least a minute, your opinions about what matters in Comics: The Marketplace are sorely lacking, so listen here to a guy who doesn’t know how to do anything in life but man the till. Aside from one Mr. Wayne Esquire, there’s no higher profile brand in the medium than Archie, and there won’t be until Marvel comes out with a comic called “Marvel”. I’ve seen it just about every day of my life for the past decade: if you keep a good selection of Riverdale’s finest teens front and center. the moms (and more than a few dads) will every one of them let out a sound like they farted audibly in familiar company and then say “They still make Archie?” Meanwhile the little girls (and more than a few little boys) don’t wait for assurances. Whether or not they know what the hell is going on with Jughead or Dilton or the Pussycats, those little digests are like magnets: covers meet eyes, newsprint meets hands, and those sweet dollars meet the bottom of the cash register with nary a word spoken. And just for good measure the moms and dads will buy one to dream of idylls past if the kids aren’t around.

It’s impossible not to admire Archie Comics, both the books and the brand. If you think superhero nerds are the apex of slavish devotion, you haven’t been checking out the unbridled loyalty that the Andrews-Cooper-Lodge folie a trois has kept boiling in the world’s elementary schoolers since your grandma was prowling the newsstands clutching dimes. Instead of clinging to a single group of ever-aging consumers that grows ever more Nixonian in their reactionary tastes (like superhero comics have for the past 40 years), the good folks at Archie have had the common sense to stick to a single demographic, like comics used to do when they actually sold. Kids from 6 to 11 read Archie now just like they always have, and the seeds of nostalgia those goofy little books implant are so fertile that they’re the only books in the store a large percentage of parents will even attempt to grapple with. Archie is the Pixar of comics, a bona fide multi-generational consumer bauble that pumps out pabulum so smooth and generic that all the captive audience can do is beg for more of the same.

Still, even though more of the same is the majority of what rolls off the production lines (the digests contain many, many more reprints than they do original works), there’s labor and smarts that go into these things. The brilliantly color-matched covers make for the slickest-looking line put out by any comics publisher bar none, the price-to-content ratio is unbeatable, and no idiom of cartoon drawing telegraphs pure unalloyed FUN and EXCITEMENT better than the pop-eyed, baking soda-smiling style pioneered by Dan DeCarlo and Harry Lucey, among hundreds more uncredited, screwed-over dead dudes. If I had to compare Archie to other consumer objects, it wouldn’t be to shit like X-Men or Superman comics -- those veer wildly from the transcendent to the ridiculously ugly and objectionable, depending on who’s involved and what’s going on in the stories, a problem the Archies neatly leapfrog. No, Archie comics are more like Pepto-Bismol or Coca Cola, a single mighty formula that’s been unchanged for years, that not everybody is going to need everyday (or ever), but that is absolutely the cure for a specific ailment, namely being seven years old and curious about Luv, or wanting to remember what it felt like when that’s what you were. They are flawless, crystalline, ruthlessly competent objects that still show evidence in every element of every panel of having an origin in the human hand, and they contain a beauty all their own, even if they’re kinda dumb. And they sell like a motherfucker, to all kinds of, uh, motherfuckers, who will never buy any other kind of comic book in their lives. These are the only examples of sequential art that transcend not just comic stores, but bookstores entirely. If you want to talk about gaining readers for comics, Archie is front-line on the grocery checkout counters and airport kiosks of America, cheesing so hard it looks like he knows the answer to a pop-quiz question everybody else has forgotten.

Recently, the Archies have taken the rather admirable step of updating themselves for the 21st century, something their rivals south of Riverdale at Marvel and DC don’t seem to have even registered is an option. “Diversity, diversity, diversity -- that’s our world now. The world I live in is a very diversified world. The world my kids grew up in is very accepting of everybody and everything, and that’s what Riverdale is now -- it’s very accepting of everybody and everything,” sez Archie CEO Jon Goldwater of the line’s recent efforts to include gay, disabled, and multi-racial characters that all the other characters don’t make a big huge deal out of on the page. Fuckin’ A, Jon, and good on yuh! Like it or not, in a world where most people have forgotten that superheroes weren’t invented by Josh Whedon, Archie is the public face of comics, and it’s pretty cool that they’re not shitting all over themselves like the cape and cowl guys do on a pretty regular basis.

Unfortunately, the nature of the beast dictates that everyone’s favorite redhead go in search of new territory to conquer now that a couple internet articles about how Archie still exists have surfaced in response to all that diversity diversity diversity. The legions of Archie readers and soon-to-be-readers out there already don’t need these writeups to find the comics, of course -- they’re everywhere, and connoisseurs of low-hanging thinkpieces are the world’s least likely actual comic book buyers (they will come in and look around for a long-ass time though). On the other hand, I’ll be the first to tell you that seeing your name printed on a glowing computer screen is serious boner fuel, and while they’ll never stop doing what they do best the Archie guys seem to agree. And so a new version of Archie has slouched forth like a redheaded Justin Bieber, focus grouped and primed to appeal to a bold new demographic: dudes who like comic books! Wait… huh?

The sad truth is that as big-minded as the folks behind Archie Comics have proved they can be over the past few years, the first issue of the new Archie reboot series (officially Archie volume 2 number 1) represents a staggering failure of imagination. Rather than shooting for the moon and creating something that might flop hard, but also might stand a chance of appealing to the millions of Cosmo and Elle readers* who still shop at the same newsstands the Riverdale gang inhabits the bottom shelves of, Goldwater & co. have become another episode in comics’ history of battered-spouse syndrome, rushing masochistically into the questionable embrace of the direct-sales market and Marvel/DC/Image readers on the lookout for the next thing that ign.com is gonna write about. Small pond (and it is one hell of a small pond) aside, these are the same guys who have spent their lives rejecting Archie comics, the same guys Archie has proven decade after decade that they don’t need. But hey, these are also the guys who have proven that you literally can’t make something bad enough for them to stop reading, so out roll the 21 (!) variant covers and mealy-mouthed articles on specialty-interest websites. Here comes Archie, and he’s totally not something a seven year old girl would read! Unless she was as smart and cool as you of course, and knew that now she has to look for the same thing she’s been reading for a year or two on the grown-up shelf in between Ant-Man and Avengers Undercover. 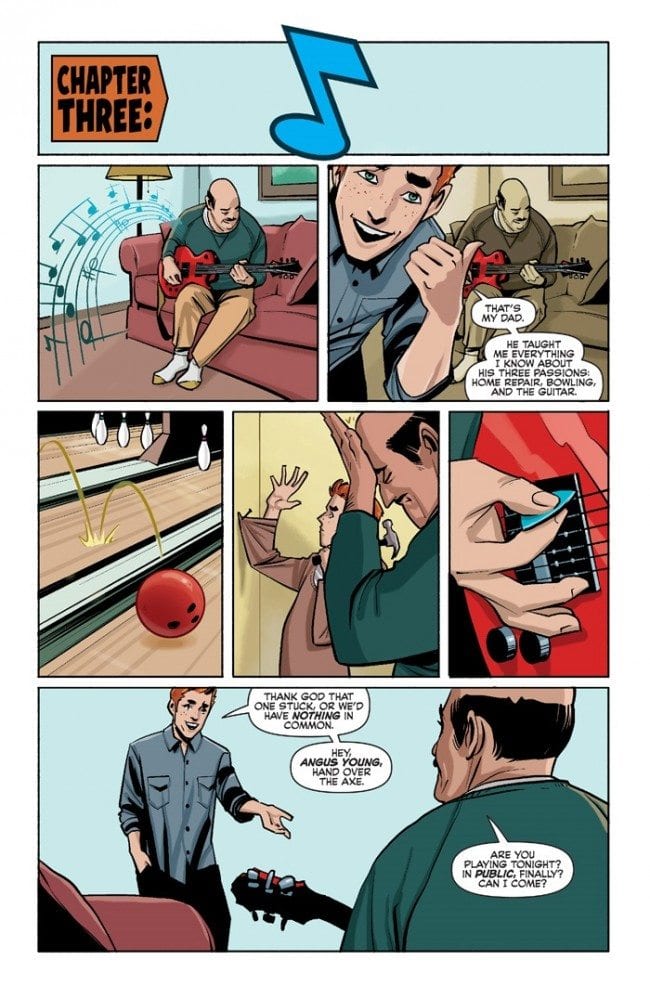 The comic itself? Well, nobody who’ll read it will give a shit, but I guess it’s… ok? Archie comics have made merciless ok-ness such a cardinal virtue for the last half-century that that’s a complement, but really, once you hop onto the same weird, nowhere-else-but-here rack that hosts Alan Moore on the high end and Dan Didio on the low, the well-oiled competence of Archie, Jughead and the gang just isn’t very notable in any way.

Seasoned mainstream-comics vets Fiona Staples and Mark Waid turn in a readable story with little bits of flash and dazzle thrown in here and there to make sure you remember that this is a New Archie, but nothing fun or interesting enough to break the mold.

Waid’s plot whips through the paces seamlessly enough, but his dialogue sounds like a 50 year old man telling a story about some teenage kids he saw while his daughter was shopping at the mall to an appreciative audience of other 50 year old men. Staples pulls off a few funny gestures and neat facial expressions, but the figures are so stiff it looks like everyone’s clothes got a quintuple dose of starch in the washer, and the backgrounds are so anonymous and featureless they make Lucey’s trad-Archie environments look like Moebius by comparison. Letterer Jack Morelli contributes the issue’s finest moments, a few emoji-inspired word balloons and a nifty visualization of music being played both badly and well. The big cliffhanger is that next issue will almost definitely feature the introduction of Veronica, so, you know, c’mon back in 30… or whatever. 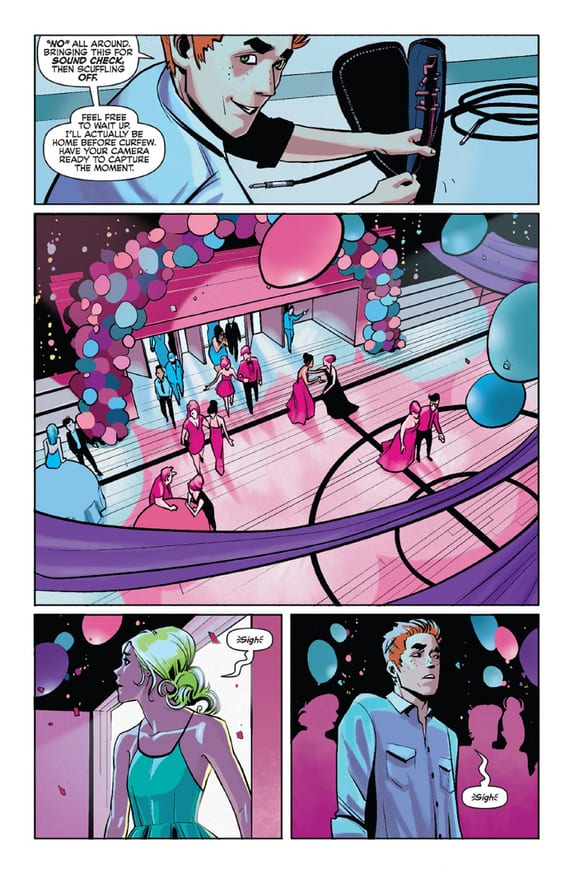 It’s pretty clear the creators give exactly as much of a shit as their audience - a nice paycheck and resume-pad on one end, a nice attempt at pretending to try something new before getting back down to the serious business of parsing Secret Wars on the other. Welcome to Riverdale, where everything is super great and nothing ever changes besides a mild, creeping shittiness -- just like comics! Take your time looking around, I’ll be over here selling the old-school Archies to people who are actually excited to read them… you know, before they grow out of it and don’t come back, or come back one time 30 years later to the same thing and then remember why they left in the first place, namely that this stuff is pretty stupid.

* (One of these Cosmo and Elle readers, a lovely lady in her mid-30s, informed me at the bar I so desperately needed to hit up directly after I finished drafting this review that she had actually, quite by happenstance, seen and read the new Archie. “Not as good as the old Archie… I mean, not even close,” was the verbatim review.) 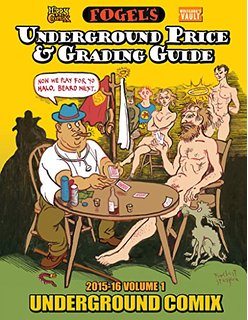 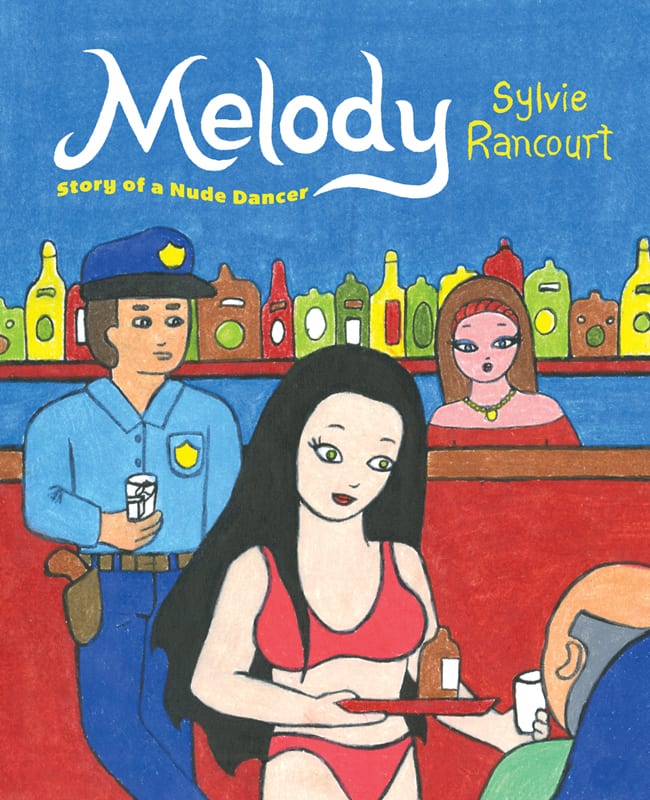