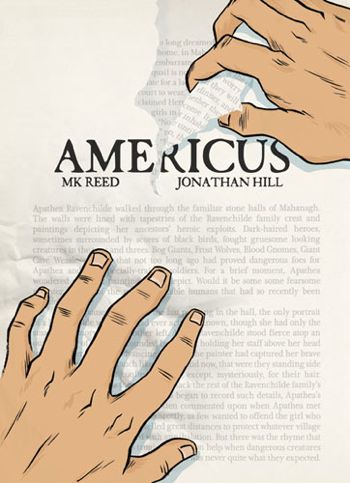 MK Reed's forte has always been her dialogue, and this is a crucial part of the success of her mainstream-publisher debut Americus. It helps that in Jonathan Hill, she has an artistic collaborator whose sensibilities—in terms of body language, nuance, and expressiveness—are remarkably in line with hers, but the book works because she has a keen sense for how people talk. Her ear for the speech of teenagers is especially sharp, rendering the scenes from high school the most consistently true-to-life and painfully hilarious in the book.

Americus is part love-letter to libraries & literacy, part rite-of-passage, and part diatribe. It's the story of a teenage boy named Neil, an outsider, avid reader, and enormous fan of a mega-selling fantasy series ("Apathea Ravenchilde"). The book's conflict centers around his best friend's mother, Nancy Burns, who tries to have the series banned from the local library, because it offends her rigidly-defined Christian faith. Reed is not afraid to choose sides in this book, and her depiction of the Christians in the book as boorish, bullying hicks will likely be controversial. Reed conflates these beliefs with the small-town nature of Americus, Oklahoma, more-or-less damning both in the same stroke. 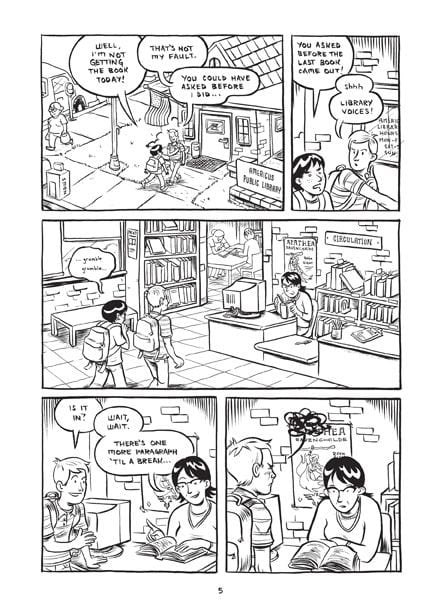 Despite that depiction, and the character of Nancy Burns's status as the outright villain of the piece, Reed takes the time to render her as a character that's more pitiable than despicable. Sure, she's sanctimonious, dogmatic, and vicious (she even suggests that her son should claim that the librarian touched him inappropriately in order to to get her fired), but Reed lets the reader know that this is a character who is just doing what she thinks is best for her family. In fact, there are moments where it's clear that she doesn't know where things started to fall apart between her and her children, even as she's applying "tough love." There's a moral consistency to her character, who views her conflict against the "communist atheists" as a real war for the souls of her children. 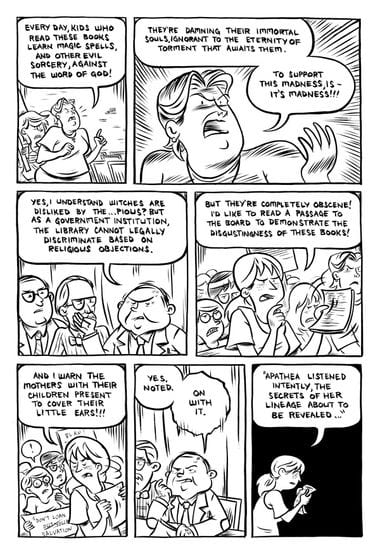 More to the point, the character of Nancy rings true. There are a number of small-town, far-right fundamentalist Christians who lead real-life crusades against books like the Harry Potter series (the obvious model for Apathea). Places like Kansas have school boards decree that creationism is to be taught in school. A right-wing extremist bombed a building in Oklahoma. There is a large segment of the American population that finds secular culture to be a gateway to secular vices, and as Nancy says, "There are more important things in life than your freedoms and choices. The only thing that matters is living righteously!" While it's implied that at least some religious people in Americus don't support the book ban (and some non-religious people who support the ban), it might have added more depth and complexity to the book to have seen a person of deep faith come out against the ban. While the behavior and dialogue from Nancy is cartoonish and makes for a compelling antagonist, the contrast between the verisimilitude of Reed's depiction of high school life and Nancy's circle of friends is jarring.

In contrast, the character of the librarian Charlotte is the essence of the book's love-letter to libraries and reading. With her cats-eye glasses and quick wit, she's a benevolent figure who nonetheless acts fiercely to protect a book that she not only views as invaluable for childhood literacy, but one that she enjoys personally (just as many adults love the Harry Potter series). I thought Reed poured it on a tad thick by tacking on a romantic interest side-story for her, complete with a fellow librarian who happens to be a hipster-looking vegan. Still, Charlotte is a fun character and a worthy inspiration in many ways to Neil.

If I take issue with how Reed handles the conflict and the players therein, I have no problem with how she depicts Neil's struggle to fit in. From dealing with a life-long antagonist in school to not knowing what circle he wants to run with, Neil is shown from the beginning of the book to be a grim, unhappy, and judgmental protagonist. He's a moody teenager and acts like it. The popular kids think he's a weirdo, but he's not interested in hanging out with the nerds, either. When his best friend gets sent off to military school when he's caught reading an Apathea book, Neil really goes into a funk. That lifts when he meets the boyfriend of an older cousin who introduces him to punk rock. Reed is a genius at coming up with band names, histories, and lyrics that don't have a specific analog, yet get across a very particular feeling of what the music means. Some of the best sequences in the book see Neil start to feel like someone out there understands him in the person of these punk bands. There's a moment where Devin (the cousin's boyfriend) plays a band called the Deadbeats for Neil, which Hill depicts in a splash page in which the crazed band's antics and sound cause Neil to look like a bomb just hit him. I especially liked the relationship between Neil and Devin, as the former looks to the latter as a much-needed role model and the latter clearly sees some of himself in the teen. It's a relationship I don't see that often in fiction, and it's one that transforms Neil from dour to energized. 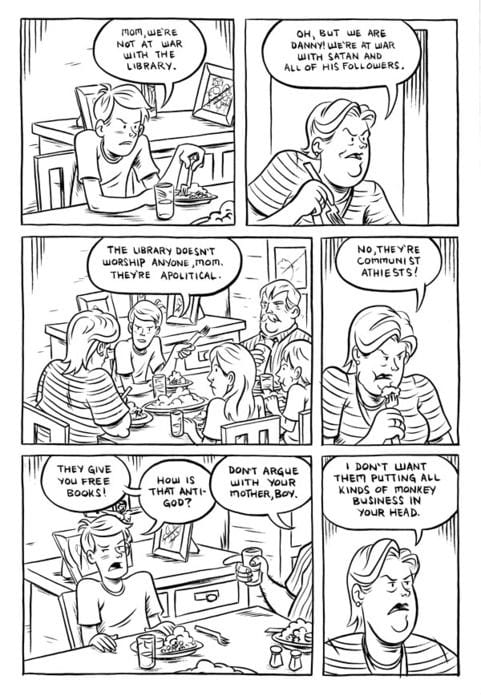 The scenes in high school alone could carry their own series of books, especially the relationship between friends Amber & Stacey. These two smart-ass juniors save Neil on the first day of school in shop class and they later bond over music and hating idiots. Slowly, Neil starts to understand that there are people sympathetic to his interests if he'll seek them out with confidence. The way Reed depicts the teachers is hilarious; some are absolutely dedicated lifers with a love for the material, others are more than a little backwards in their approach as educators (a biology teacher says, "We all know that God created the earth 6,000 years ago," but that "science tells it another way"; a history teacher's first assignment is for the class to tell him why America is the greatest country in the world), and some are just refreshingly honest (like the algebra teacher who talks about how he understands that no one wants to learn algebra and he certainly doesn't want to teach it to them, but that's what they have to do). The nature of the fights, the cliques, the obsessions, and the battles for everyday survival are funny and true to life.

The book's gimmick is that the reader is treated to to long passages from the latest volume from The Adventures of Apathea Ravenchilde, as adapted by Hill. I was surprised to see just how good Reed is at writing heavily continuity-based fantasy stories, and while the passages she writes about clearly reflect on the real-world events occurring at that time, she's careful not to be too on-the-nose in the fantasy/reality bleed. Instead, she and Hill let those passages breathe on their own, which makes them genuinely exciting. While the rest of the book is done with little shading or spotted blacks (Hill uses a thick but clear line), the Apathea sequences are heavily gray-scaled and moody. It's a nice visual contrast for the reader, as well as creating natural break points in the book beyond the simple chapter numbering. Hill's storytelling choices in this book are all winners, using slightly cartoony and even grotesque character design in a mostly naturalistic setting. His work is not unlike that of Aaron Renier, except with more of a European clear-line feel to it. 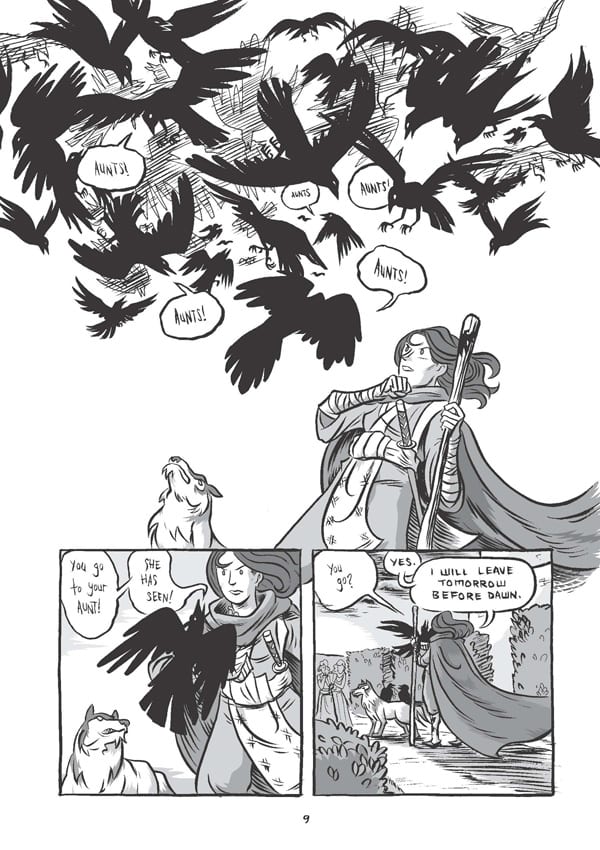 Reed has a special talent for Young Adult fiction. Americus is her longest sustained narrative to date, though her self-published Catfight was of a similar scope and ambition. She simply has a knack not just for how young people talk, but how they relate and come into conflict with one another. While the resolution of the story finds Neil gaining confidence thanks to a speech he makes at the library board's meeting about banning Apathea, that confidence feels well-earned and organic. All of Reed's character arcs have that same feeling of well-earned development, thanks to small, quotidian details she relates about each character within moments of their introduction. What I didn't realize is that Reed also has a skill for fantasy storytelling, as her webcomic About A Bull hints at. While I find her writing about high school to be more compelling than her writing about a fantasy witch-warrior, I could see her doing a perfectly fine job with the latter sort of series. I also like the fact that she has a distinct point of view and isn't afraid to push it through her characters, which is unusual for YA fiction. I think she could have a bright future at First Second (a company that specializes in YA comics of an unusual bent) or even Scholastic, if she's willing to do something a little more mainstream. 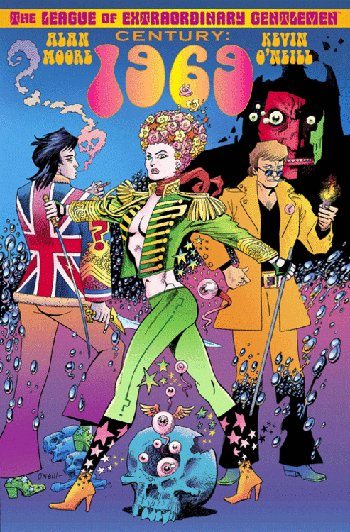 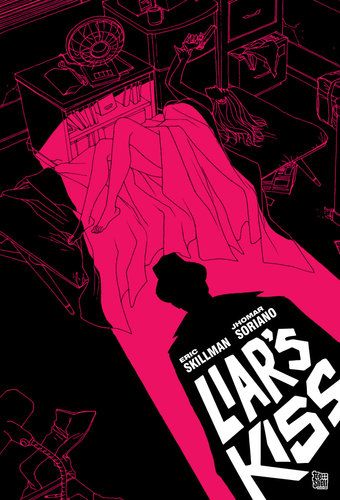