Capullo returned in time for a D.P.7 story. What is a "D.P.7", you ask? It's one of the titles that belong to yet another line of comics, the appropriately maligned New Universe. Gruenwald co-created and wrote 32 Paul Ryan-drawn D.P.7 issues and one annual drawn by yet another rookie (notice a pattern?) Lee Weeks. Of course I had to hunt and read them all before continuing my Quasar read. 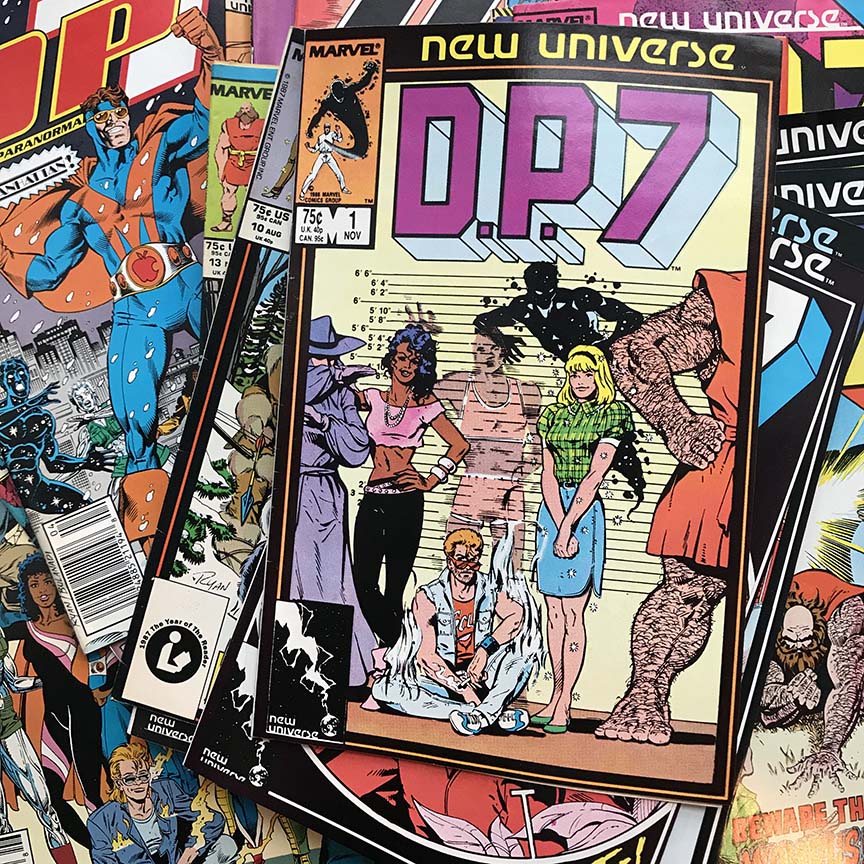 Credits Note: Actually, letterer Janice Chiang, colorist Paul Becton, and editor Howard Mackie seamlessly transitioned from D.P.7 to Quasar along with Gru, Ryan, and Bulanadi. Chiang and Becton worked on the title for its entire Quasar run. Mackie was the editor up until issue #23, with Ralph Macchio finishing out the "Cosmos in Collision" saga for a couple of issues. Kelly Corvese would jump in as editor from #s 26-40.

In short, D.P.7 was a slog at first but Gruenwald's knuckling down and trying to salvage his own corner of a larger sinking ship is formidable, commendable at best. It had its moments, and I admired Gruenwald's unwillingness to let any of his past efforts go to waste. So when he brought D.P.7 (and some Star Brand, too) into Quasar, I was right there with him. I was weirdly invested in those characters, too. Capullo drew the hell out of them. 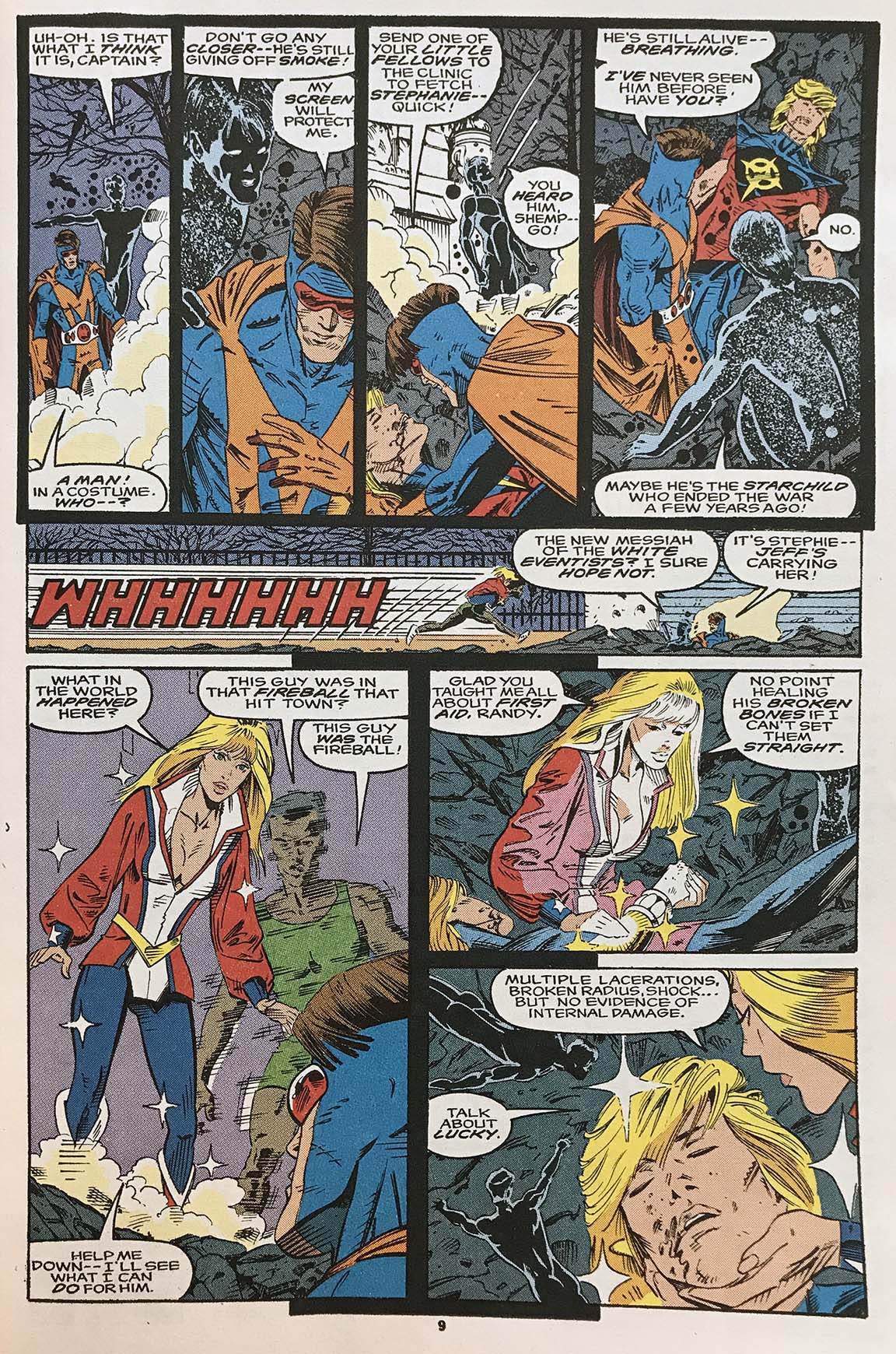 Operation: Galactic Storm, the big Avengers crossover of 1992, kicked off and Capullo drew Quasar's first participating issue. After taking a 2 issue-break to draw some of that summer's mutant crossover, Capullo returned to the title that was picking up steam. It wouldn't last. Capullo was getting too hot to be slumming it. Issue 38 would be his last. 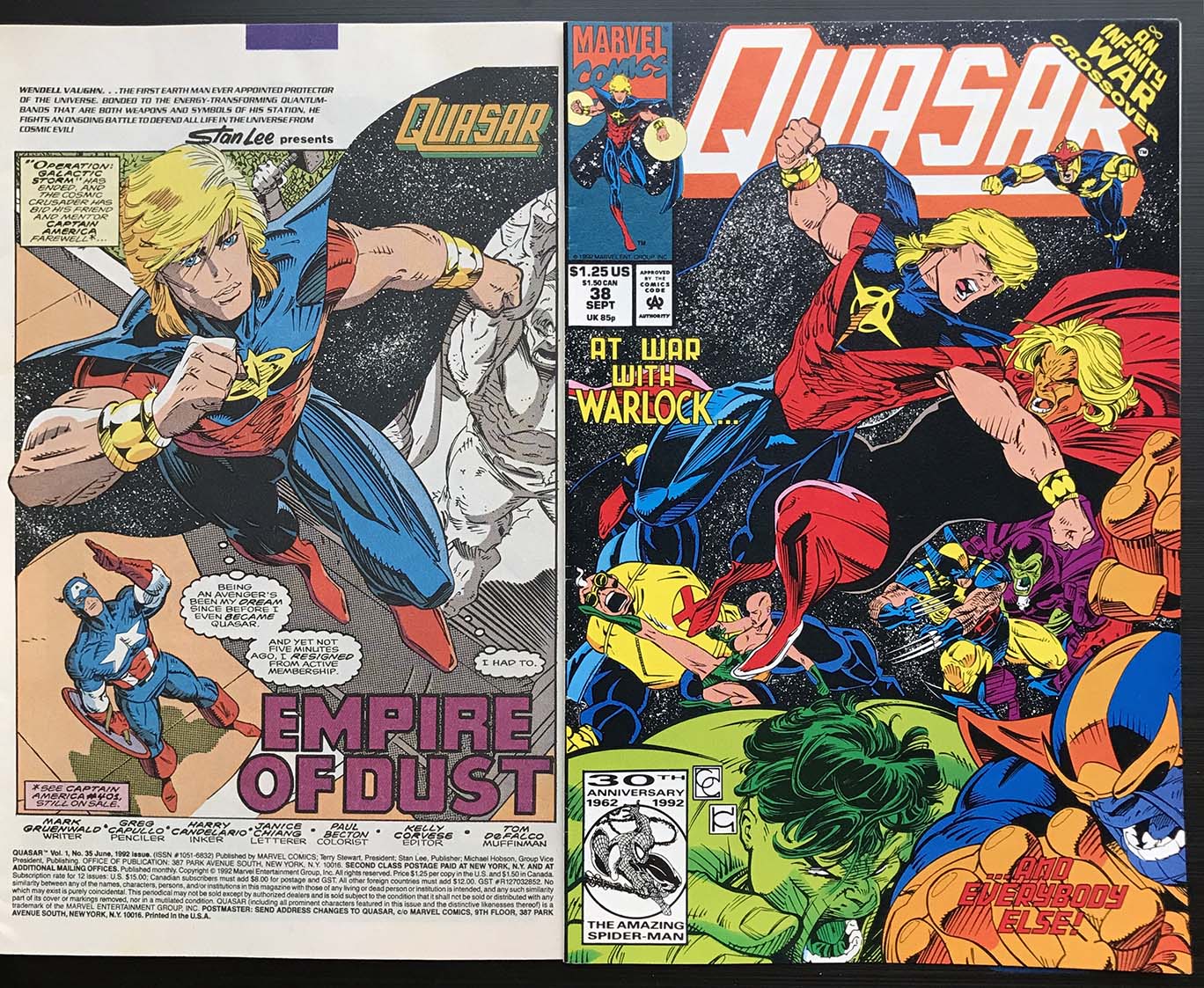 You can't blame Capullo. He was a young, mercenary freelancer who was given a golden opportunity when the Image guys left their slots empty at Marvel. Even his herculean efforts couldn't save Quasar from terminal uncoolness. 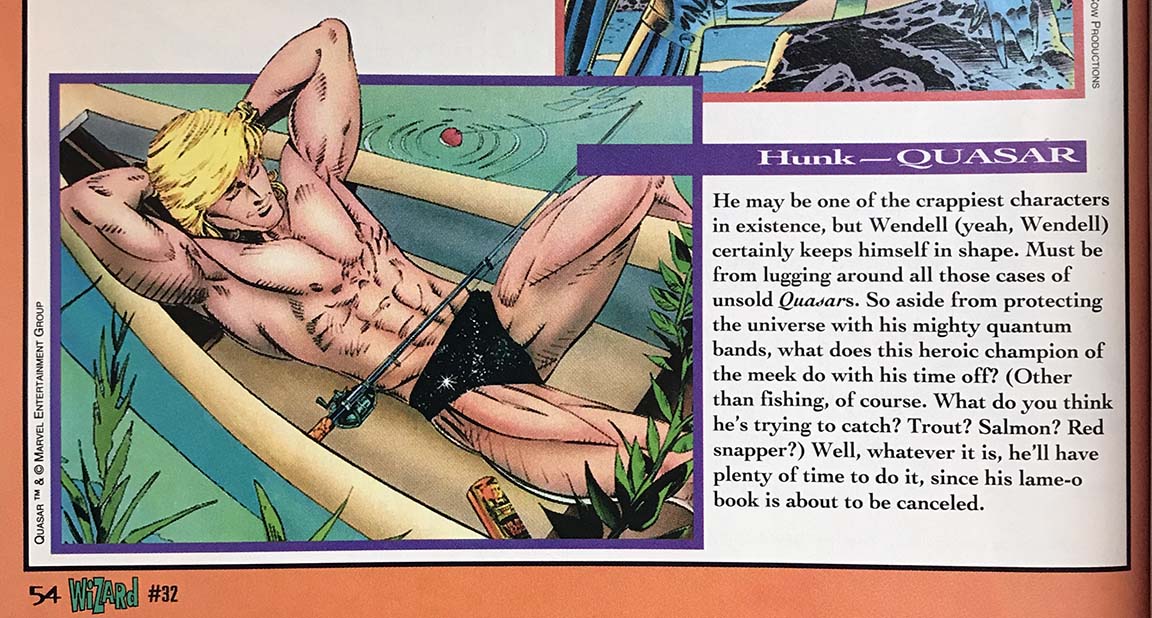 The fact that Wizard Magazine cast aspersions on a legitimately good comic book bugs the shit out of me to this day. They had their pluses, but this was around the time when Wizard began to buy into their own hype, and I'm petty enough to still hold their smug, self-congratulatory posturing against them. 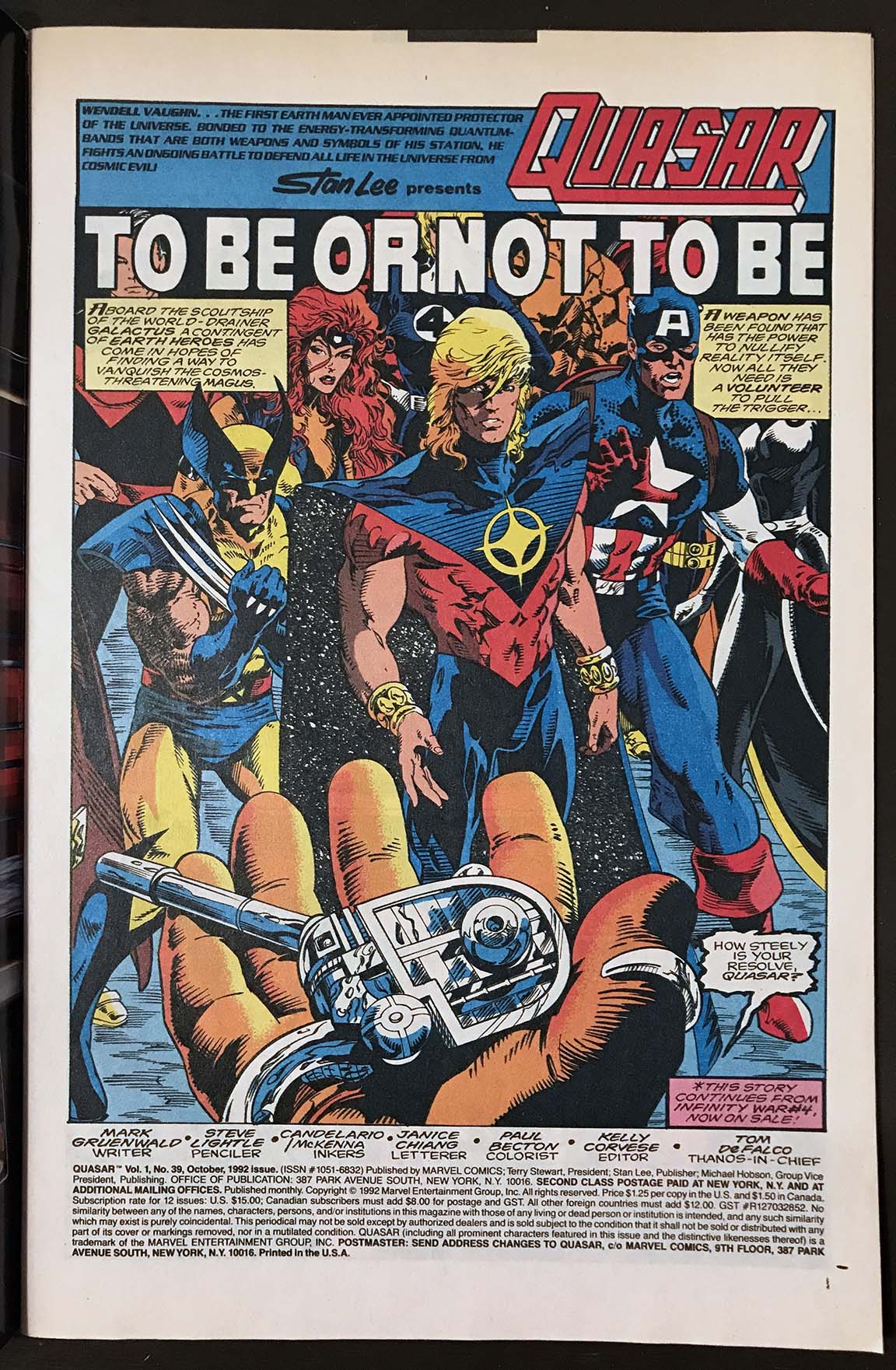 The mighty Steve Lightle stepped in to draw an issue-and-a-half of an Infinity War crossover, immediately followed by Bart Sears assistant-cum-protege Andy Smith. You guessed it, another rookie. Also, from here on out, Mike Rockwitz was the editor with Ralph Macchio returning to serve as group editor. 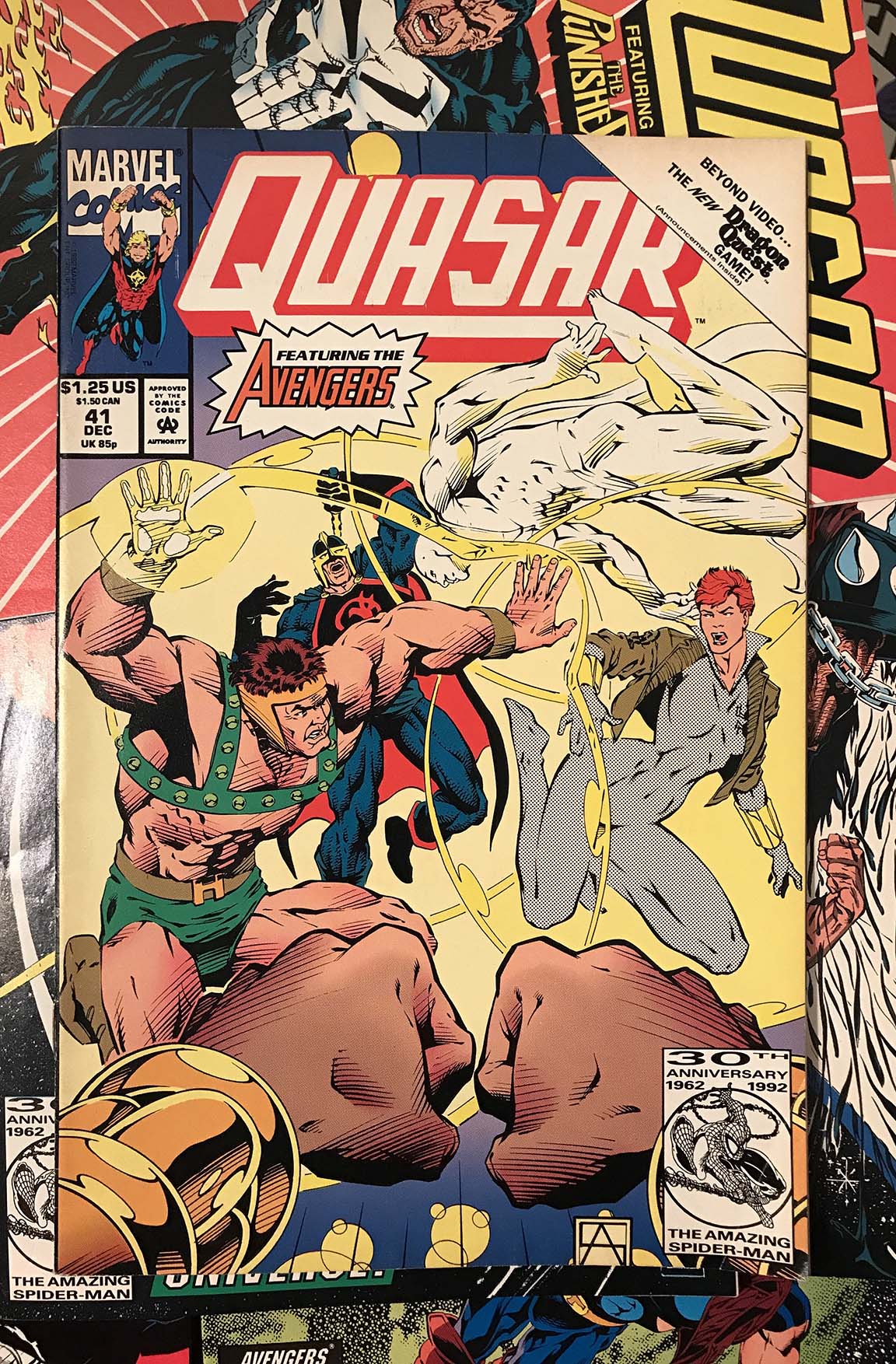 In the span of ten issues, Smith drew eight of them, with guest spots by Grant Miehm. Smith's final issue was #50 (Well, he also drew the penultimate fill-in chapter, the only issue not written by Gruenwald but by Ron Marz), which had an odd bit of meta-commentary that has never been pointed out and discussed. The big bad, Ereshkigal (Erishkigal in #49), wields her godlike "Starbrand" power in order to dominate reality, starting at the "nexus interzone." Spoiler alert -- she had been posing as a friend of Kaylan Ballantine's (Quasar's GF) for about 20 issues. Look closer; Gruenwald is basically talking about Image Comics. 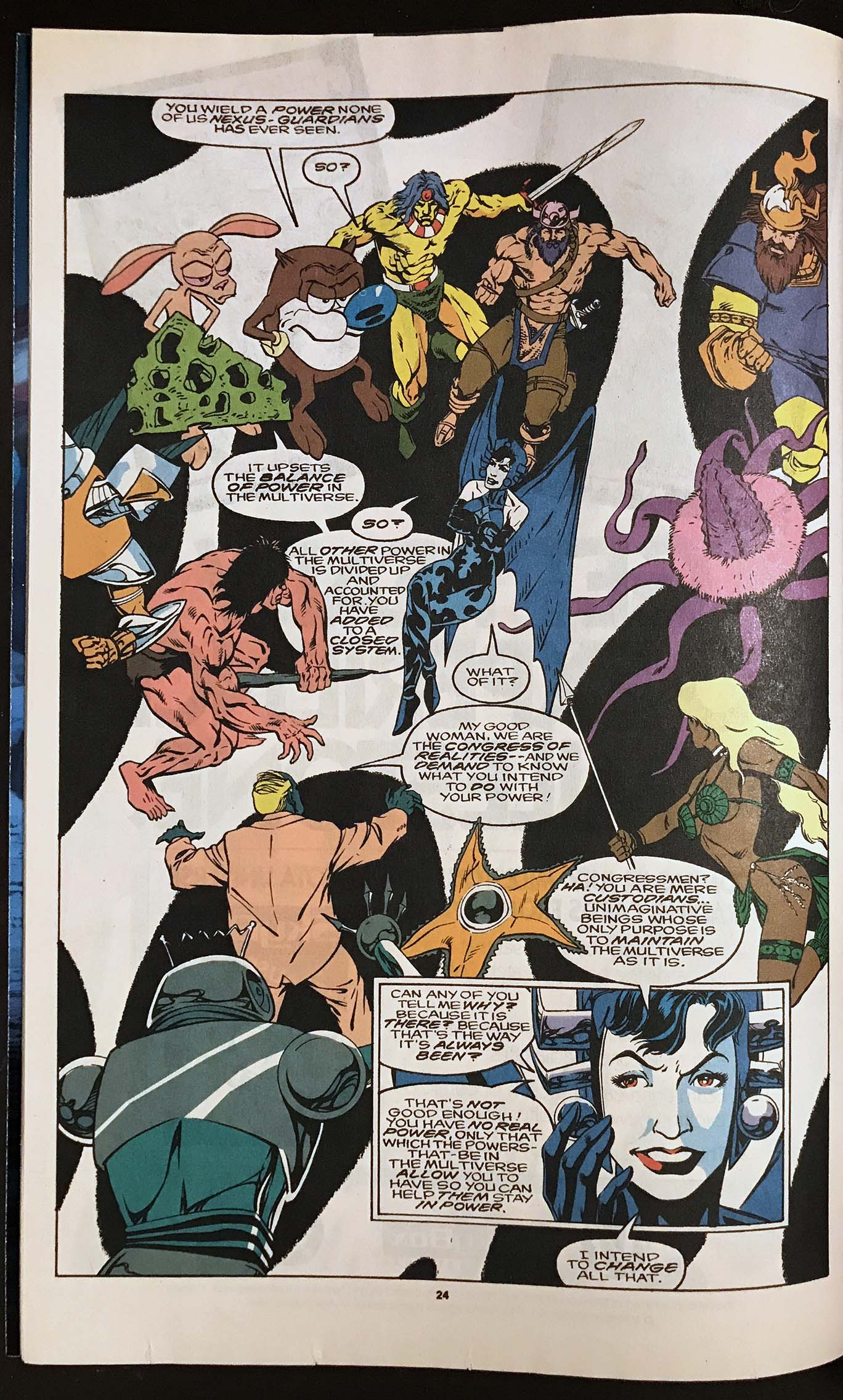 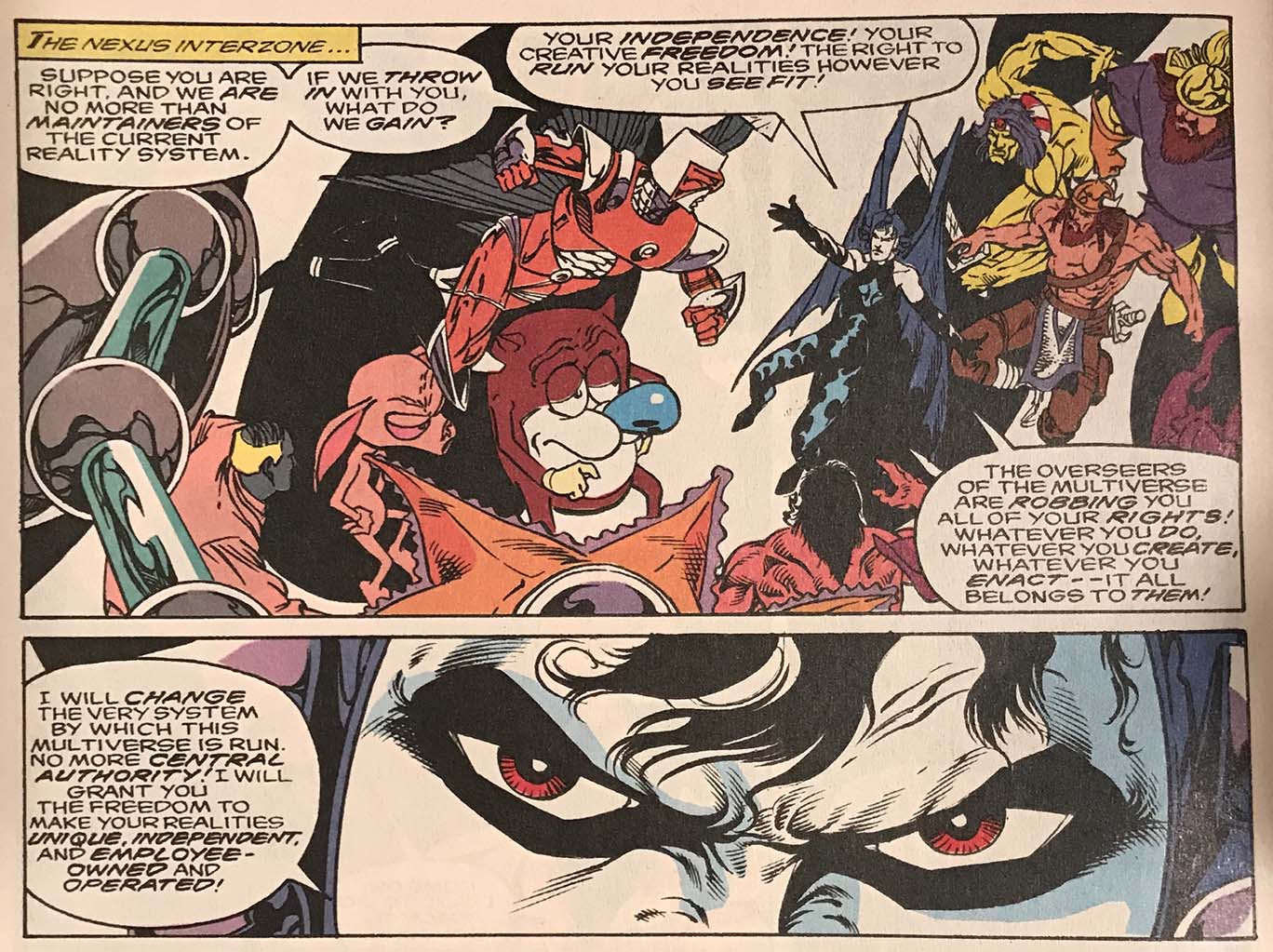 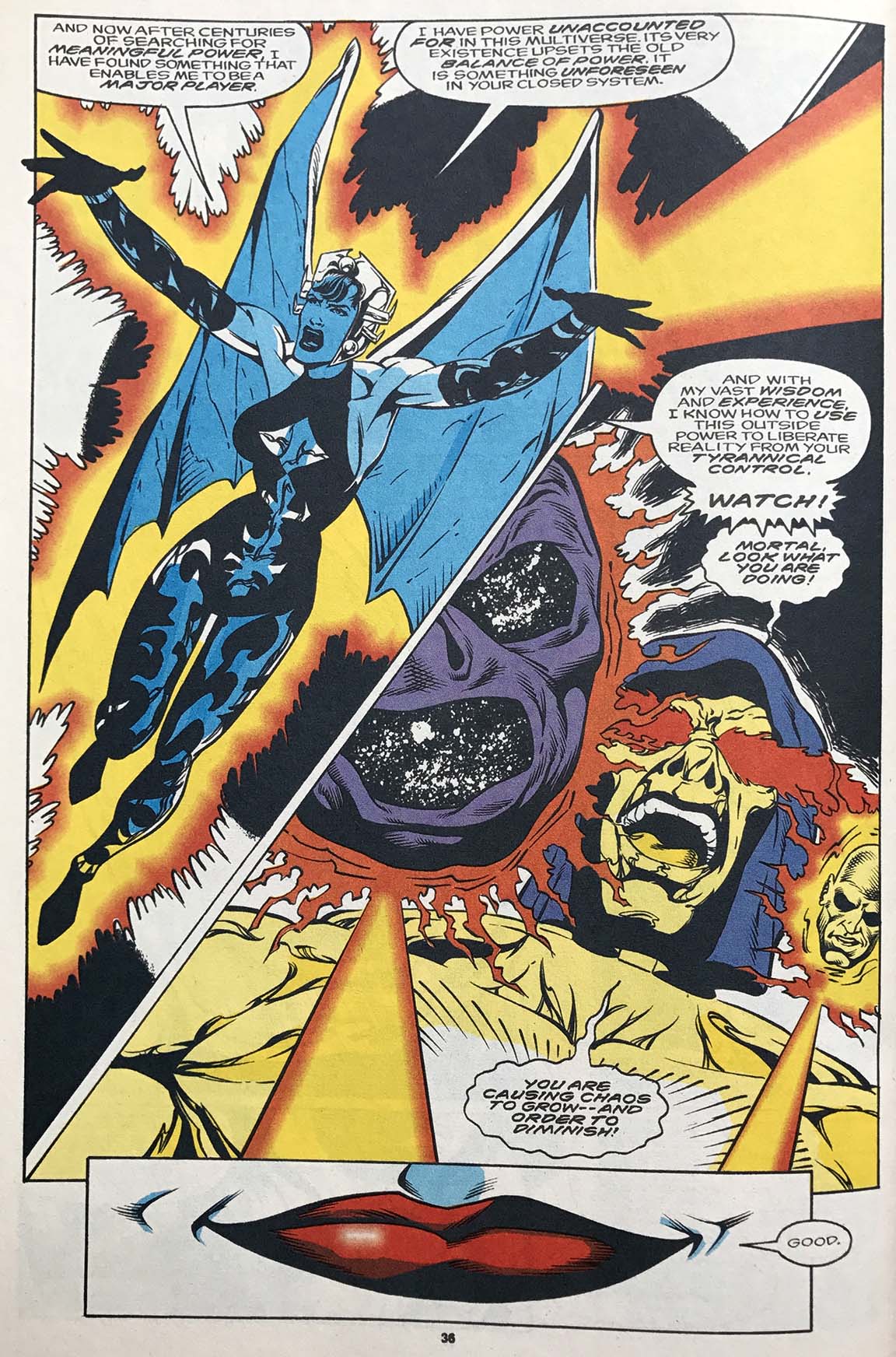 This is it, gang! This is the very center of what makes Gruenwald tic. Part of me wants to believe it was just him playing devil's advocate, or maybe it was a cheeky SOS to those who would listen. But I'm not buying that. Through his eyes, what I see is that there are only two houses in superhero comics, Marvel and DC. These are the two institutions worth building on, worth surrendering to, worth even talking about. Renegade independence doesn't count for shit, it's not real, it doesn't "matter", and the more you pursue it, the more you weaken the center. Don't tinker with tradition, don't mess around with protocol. I'm reading between the lines, but I'm not reading too into it. Gruenwald has stated his appreciation of the wider world of comics in his Mark's Remarks column, but if you strip away all the niceties, Marvel and DC are where it's at for him. There's nothing wrong with a little subversion or rule-bending - that's encouraged - as long as it happens within the sacred halls of the Big Two.

Image was a little over a year old at that point, but it shook things up so thoroughly that it unnerved Marvel and DC and Gruenwald himself. 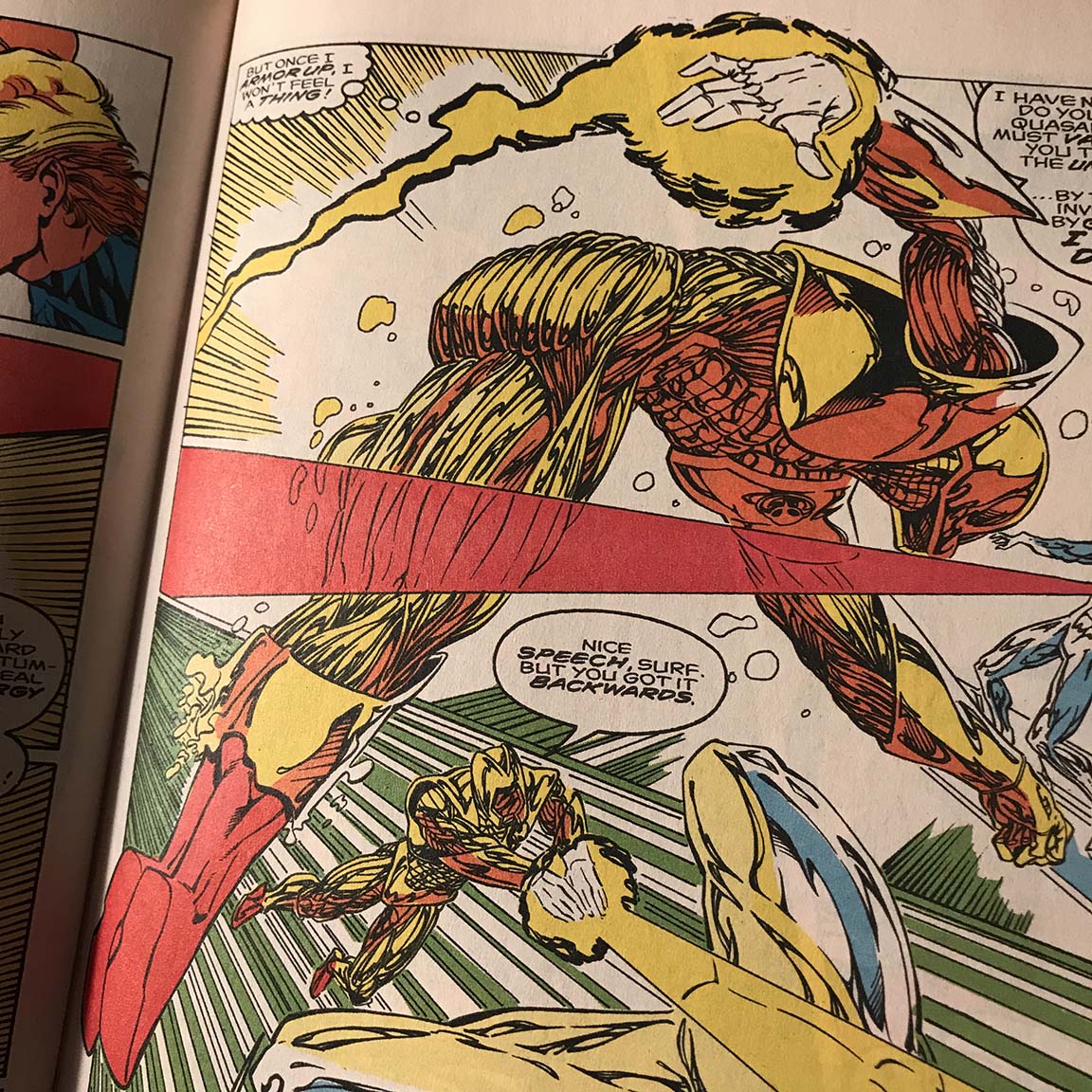 The yellow, sinewy armor shown above looks mighty similar to Valiant's X-O Manowar character. Three years later, interestingly enough, Gruenwald would edit the only crossover with an "independent" he would ever be involved in, the Marvel half of the Iron Man/X-O Manowar:Heavy Metal #1, written by his close and personal friend Fabian Nicieza; The Valiant half was drawn by Andy Smith.

In the end -- spoiler alert -- Ereshkigal does herself in. 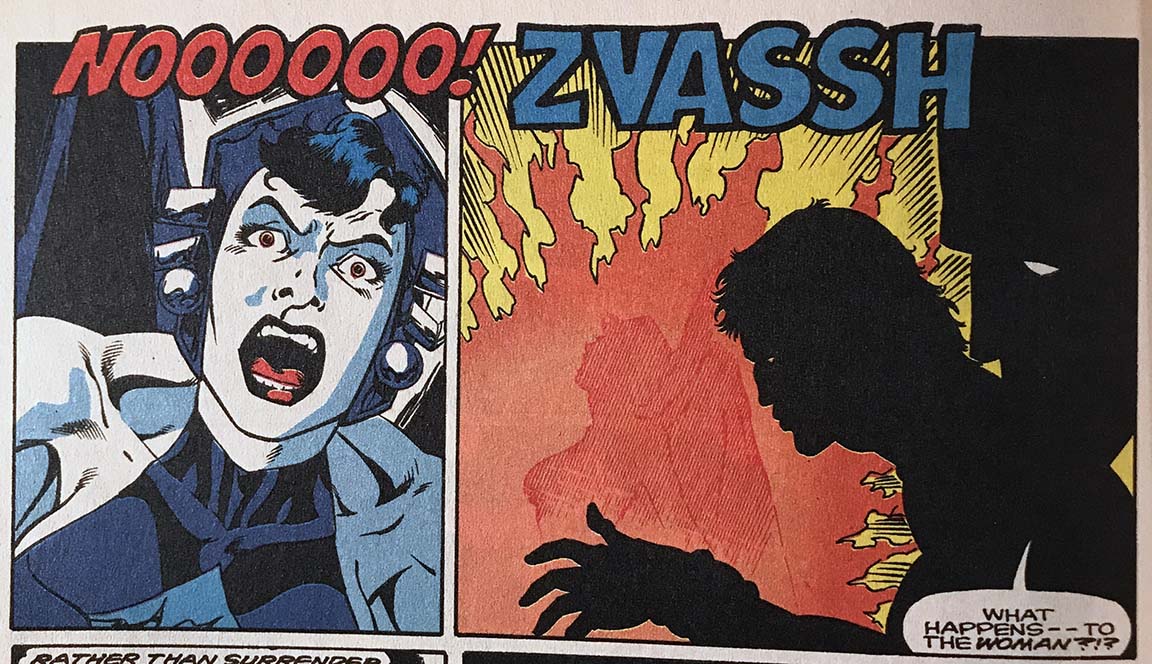 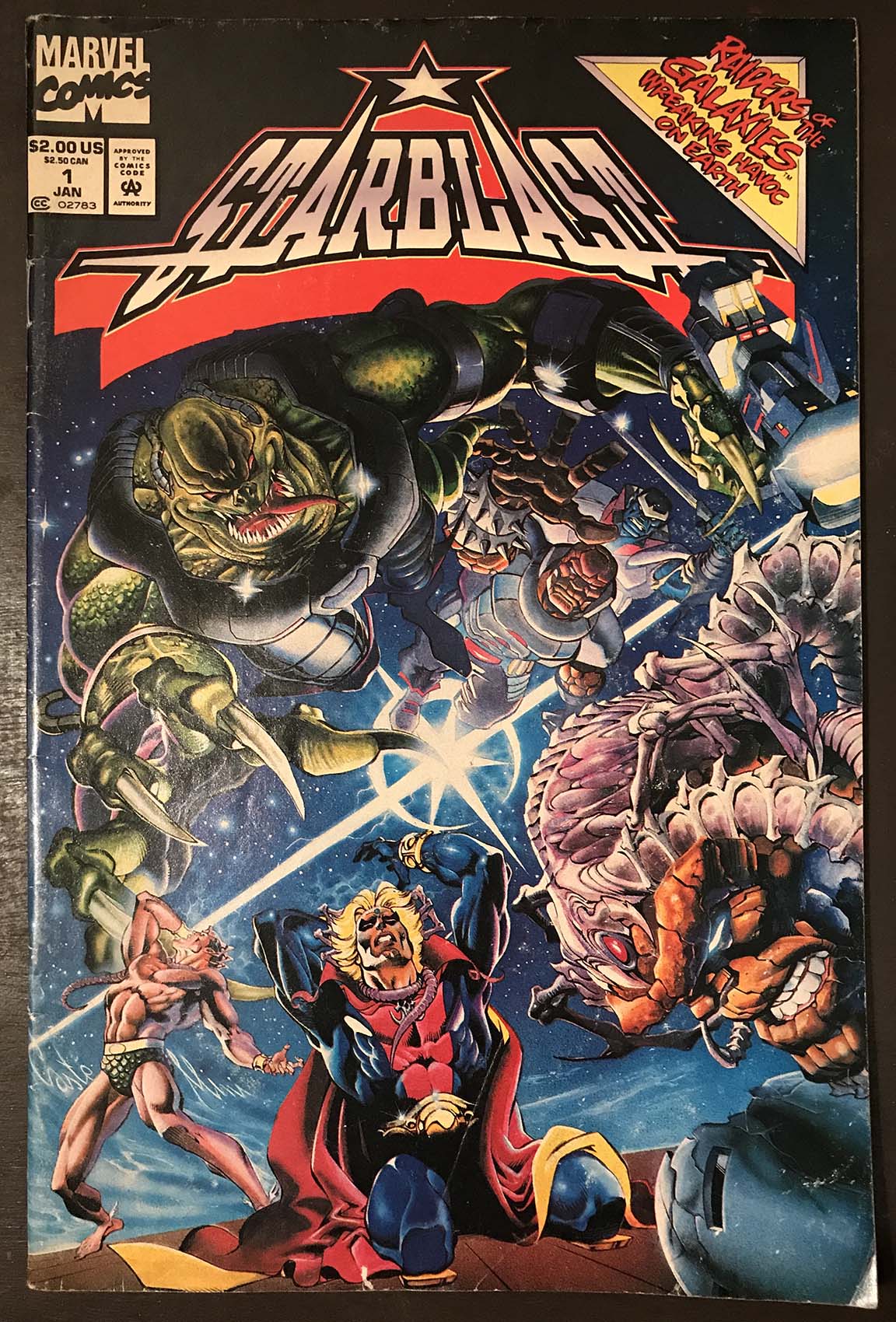 Starblast #1 was the third pivotal comic book that I acquired during “X-mas Break” -- the holiday batch of back issues that gave me the impetus to write these Overword essays. I read this issue before I revisited Squadron Supreme, before I binged on Quasar, before I dove head first into D.P.7. This was a corner of Marvel comics that was at a low ebb... and who drew the first two issues of their big event? Herb Trimpe in his Liefeld stage of art, a stage that I personally really like and go to bat for all the time and I think two of my friends might agree with me, nobody else. Herb Trimpe was a goddamn badass. 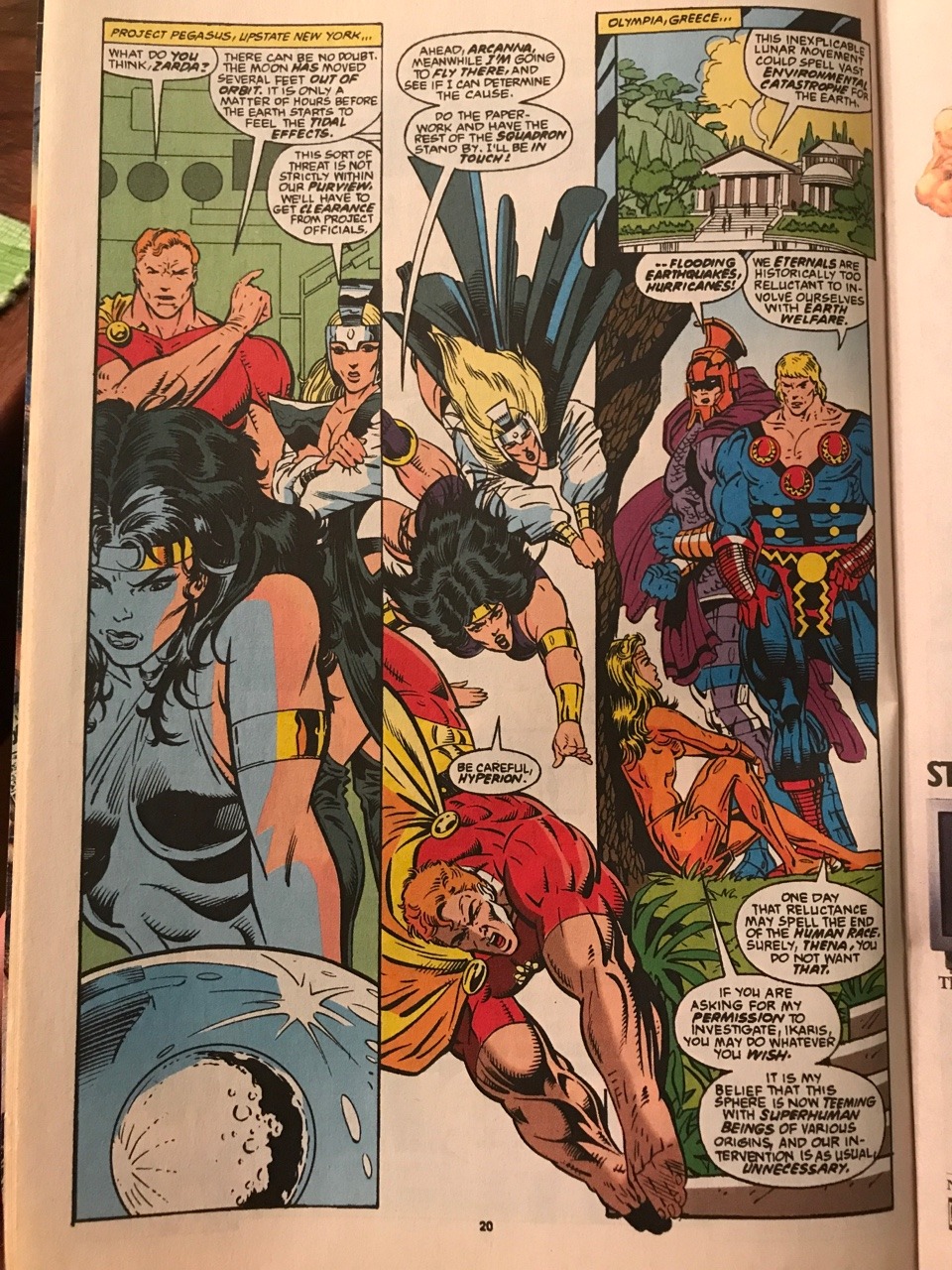 I can't stress enough how crazy and imaginative Starblast and its connective Quasar issues are. There's a real agency to the writing, but not in a "let's save this sinking ship" sort of way... it's more like "let's go out with a bang and tie up some loose ends along the way". Also: Superman vs. Superman... c'mon! That should be a mind-blowing fight comic. 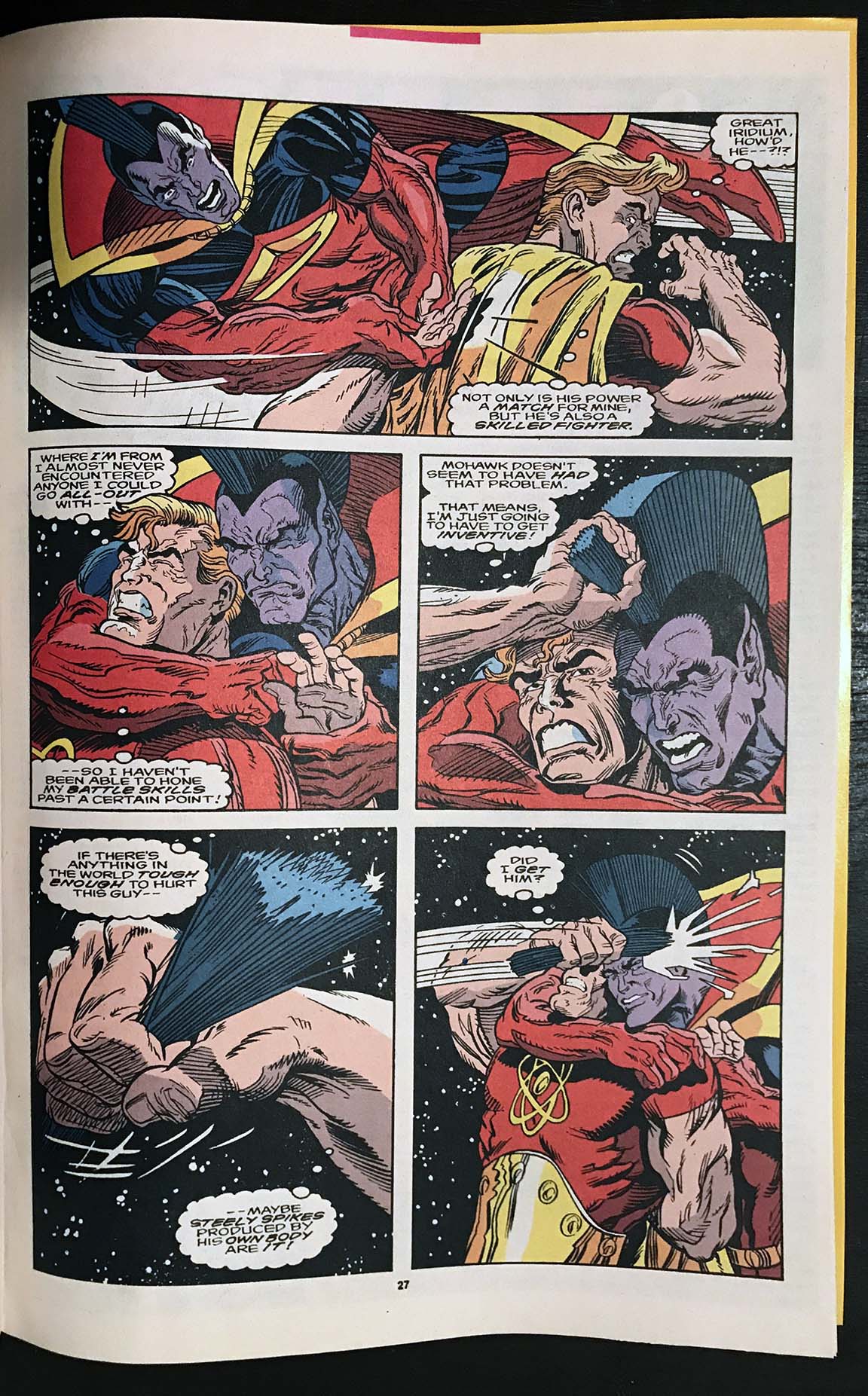 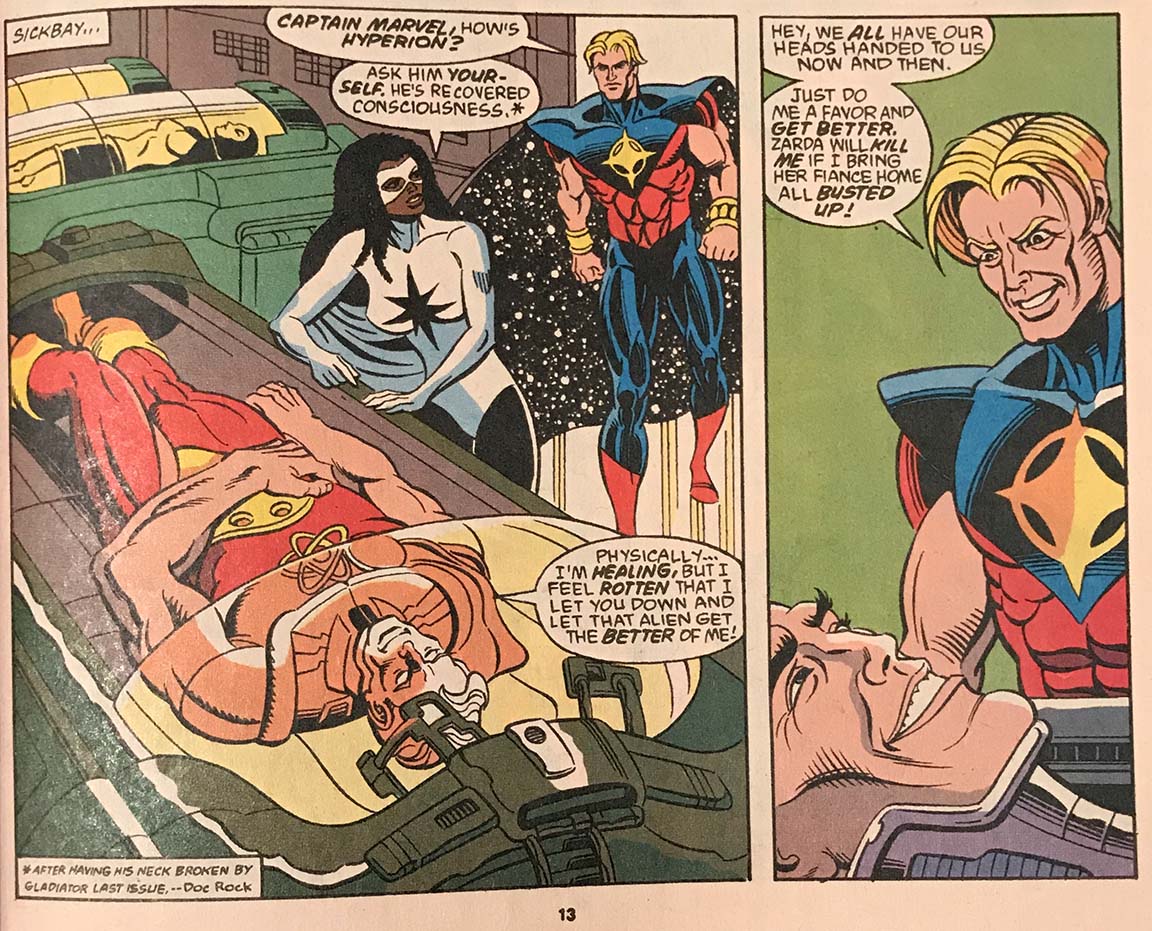 Quasar #57 was the last time Mark Gruenwald wrote Squadron Supreme's Haywire, Kaylan Ballantine (Quasar's stranded girlfriend and wielder of the Starbrand power), or anyone related to the New Universe. 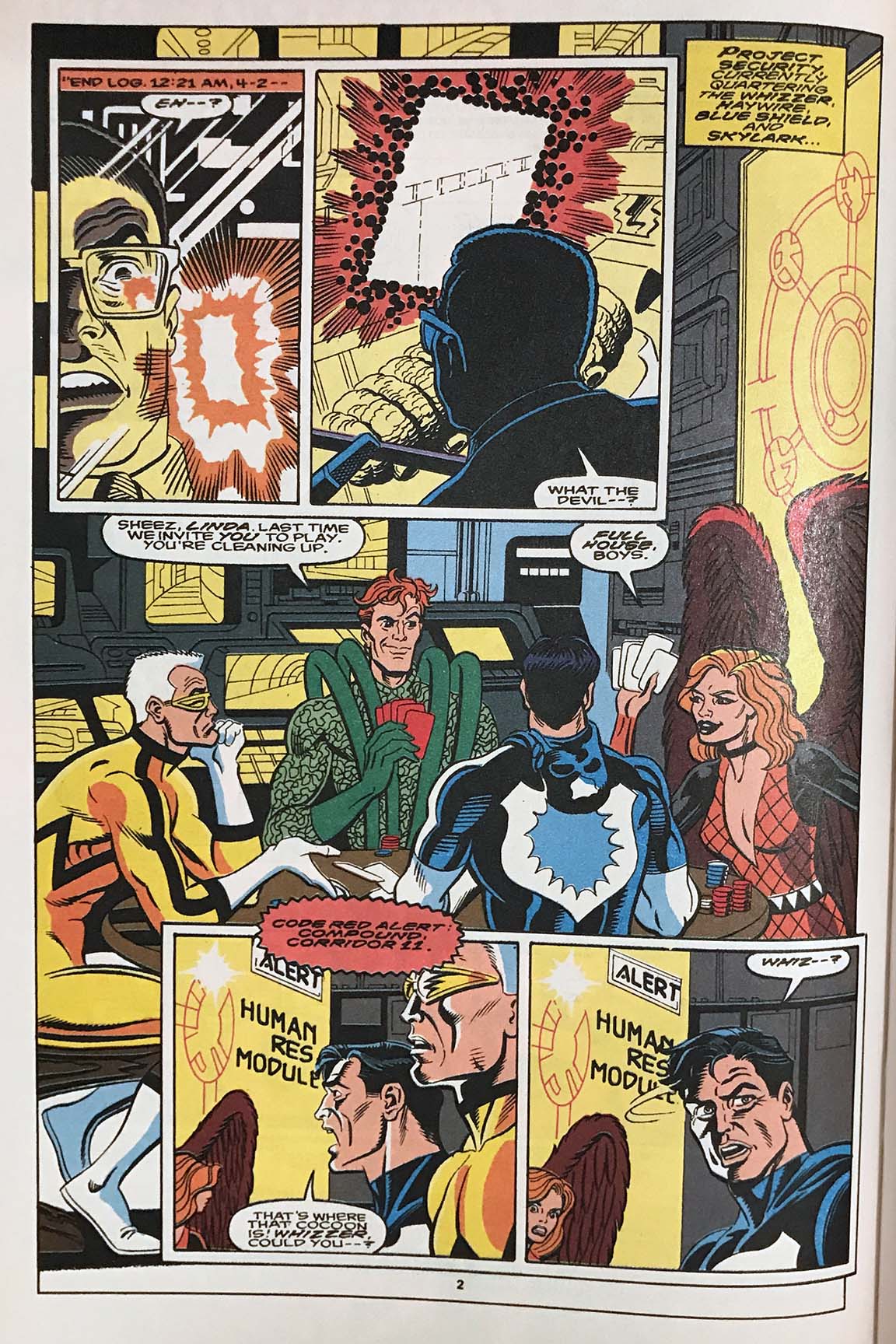 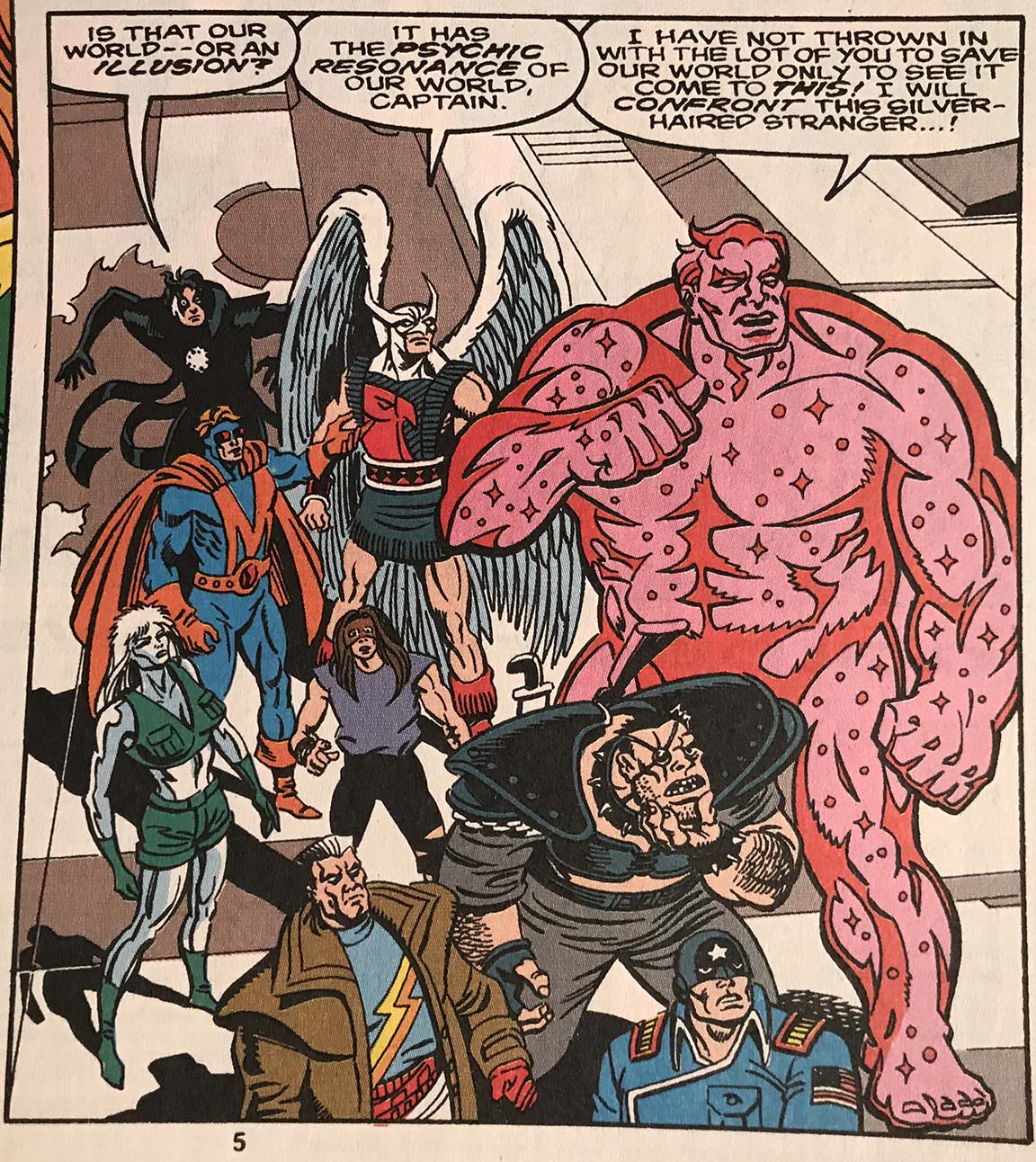 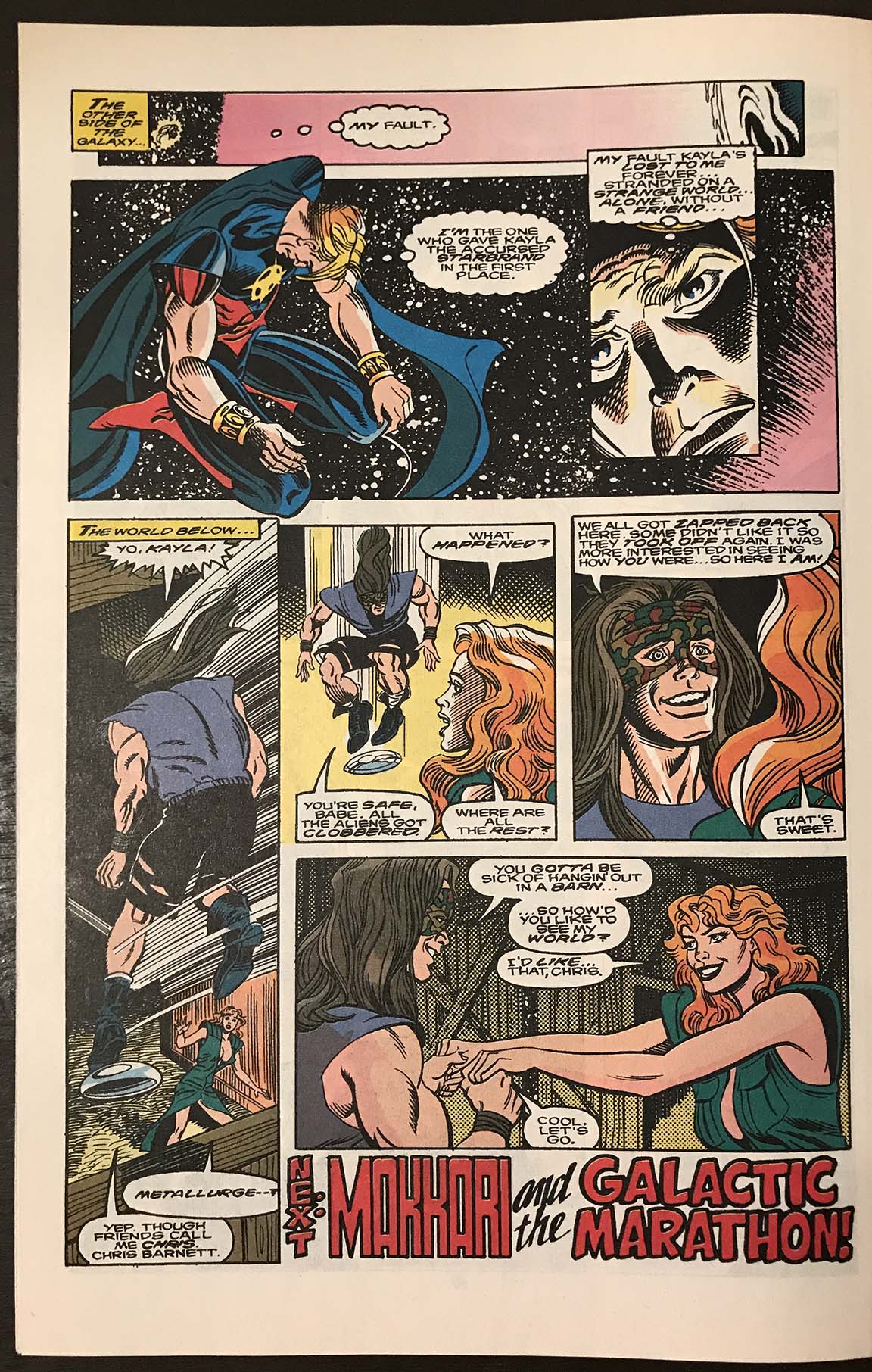 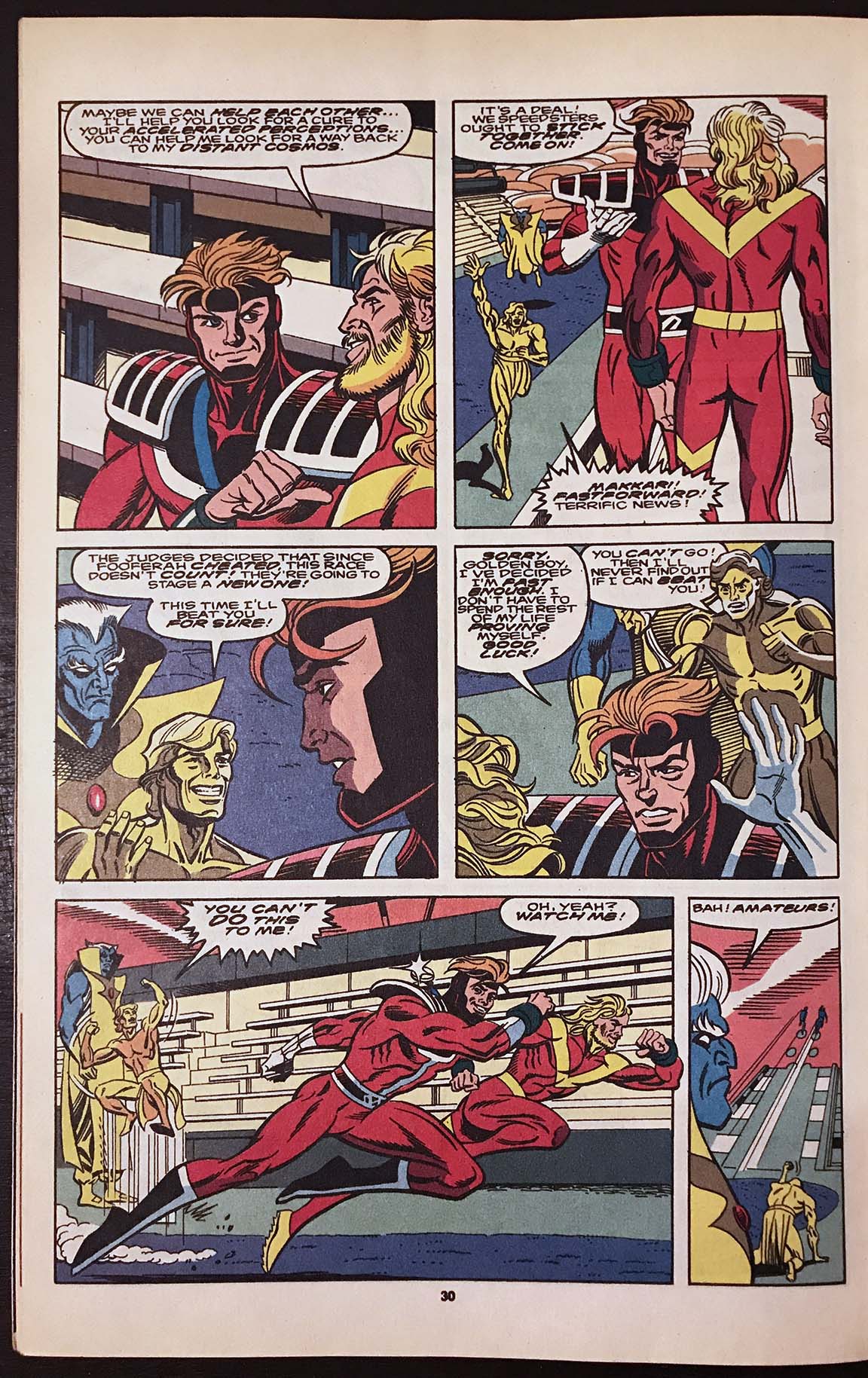 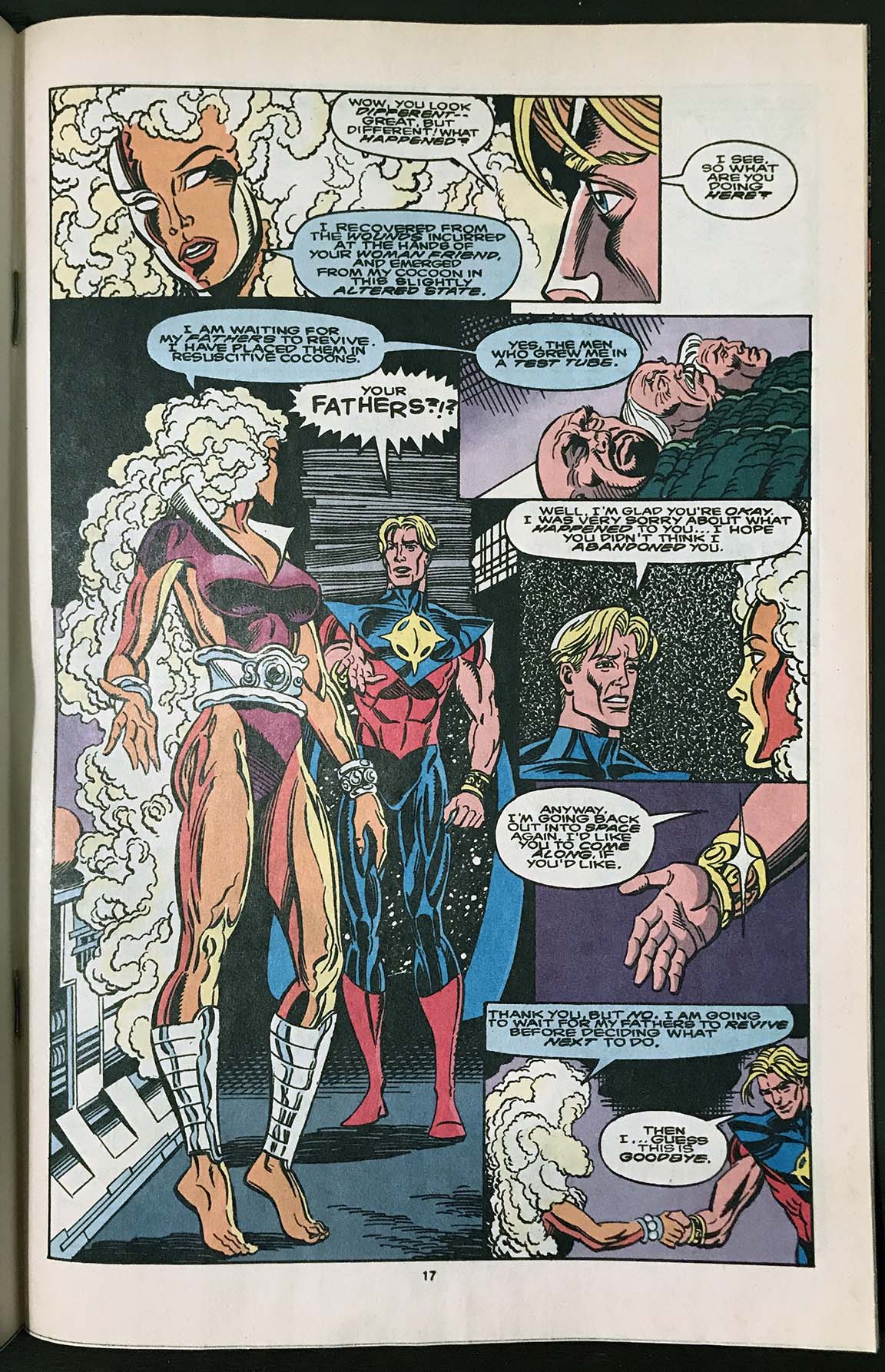 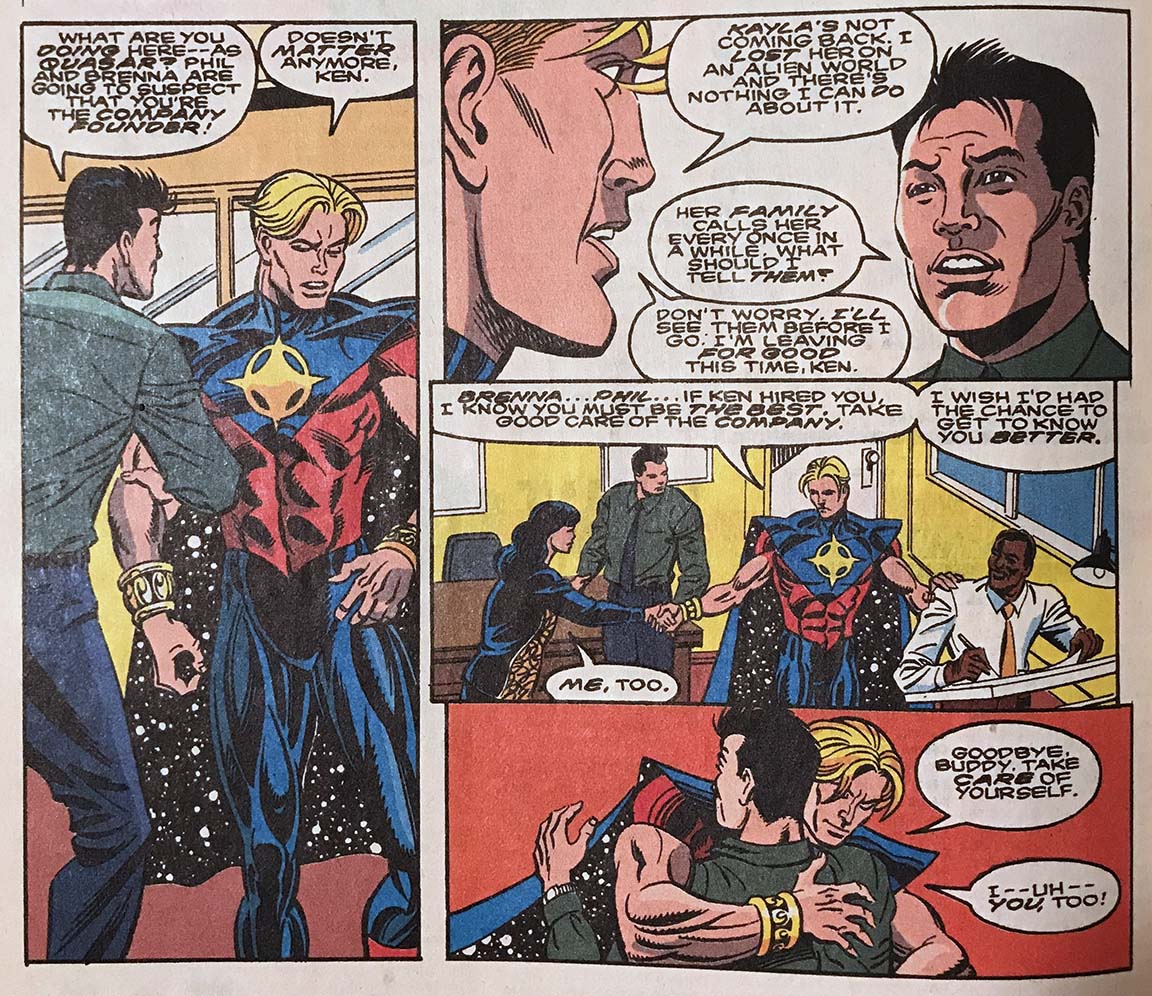 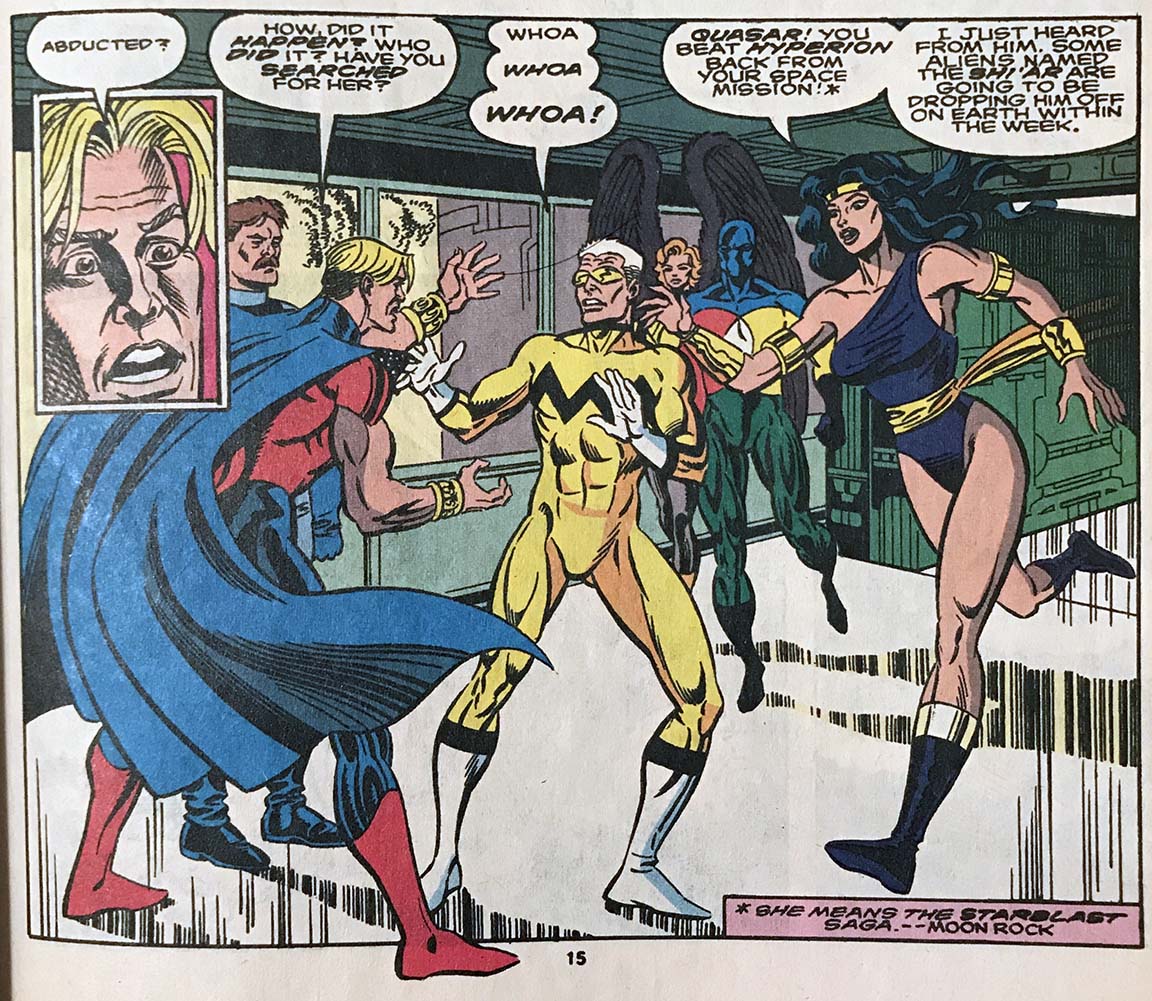 Quasar made it to issue 60. 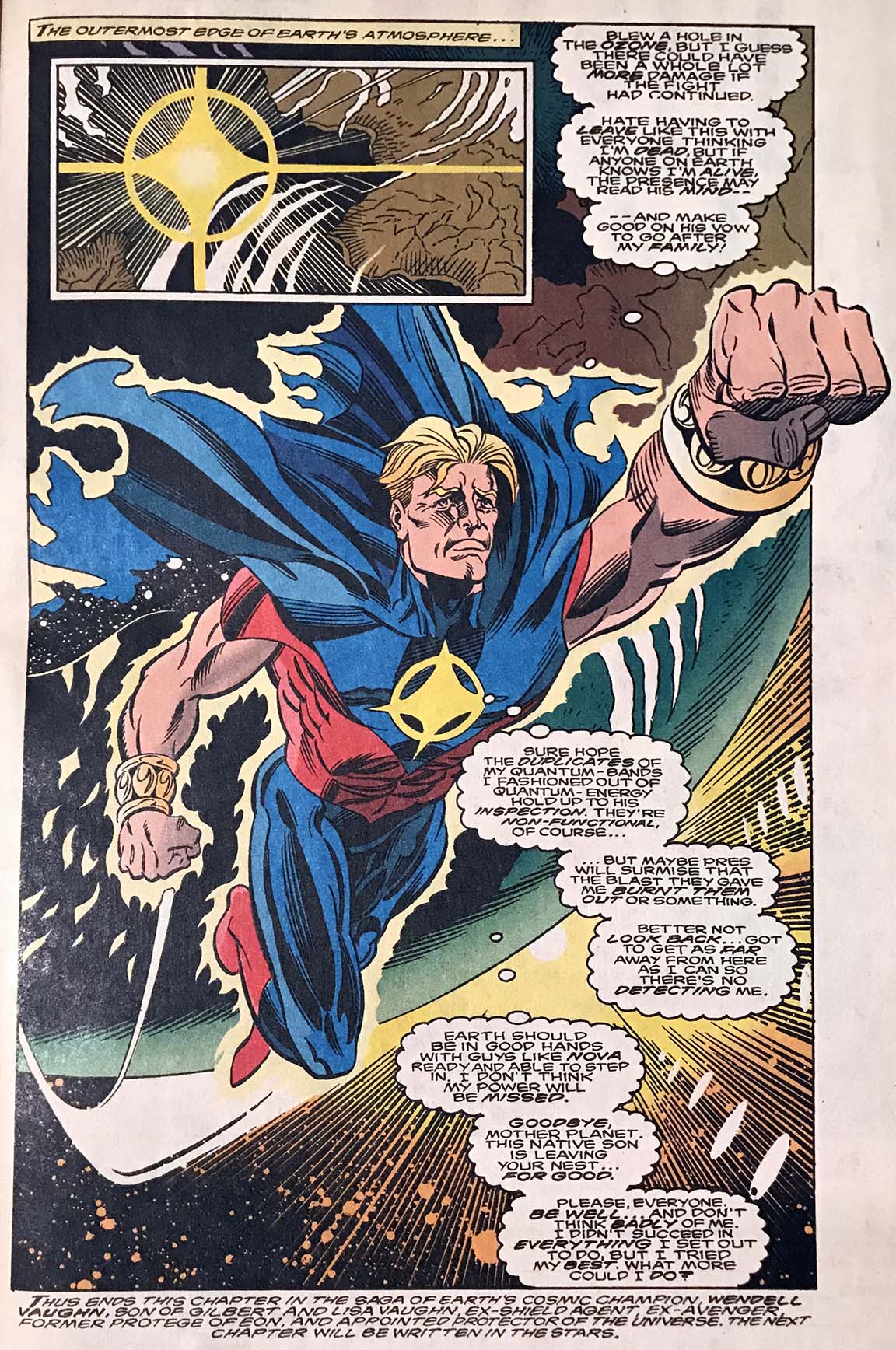 What have I taken away from all of this? From the harsh realities of 90s comic book publishing to the heartbreaking finale that Wendell Vaughn had to endure... was it worth it? Absolutely, every step of the way. I came away from the experience with adoration for characters I previously didn't care about. More importantly, this showed me creative tenacity in the face of lukewarm reception. I remain in awe of Gruenwald investing in and diligently working on a character not many cared for. It had to compete with the Spider-books and the X-Offices and the Death of Superman and Image comics. While the entire industry was trying to catch that heat, Gruenwald was turning inward, fixated on his personal passions. He chiseled his quirks to a fine point, disproving the dictum that the more personal and detailed you get in your writing, the more universal and relatable your truth will be. Very few related, but Mark Gruenwald bore his DC soul in a Marvel world. He held firm and did his job all the way to the end despite the odds.

Nothing is cooler than that. 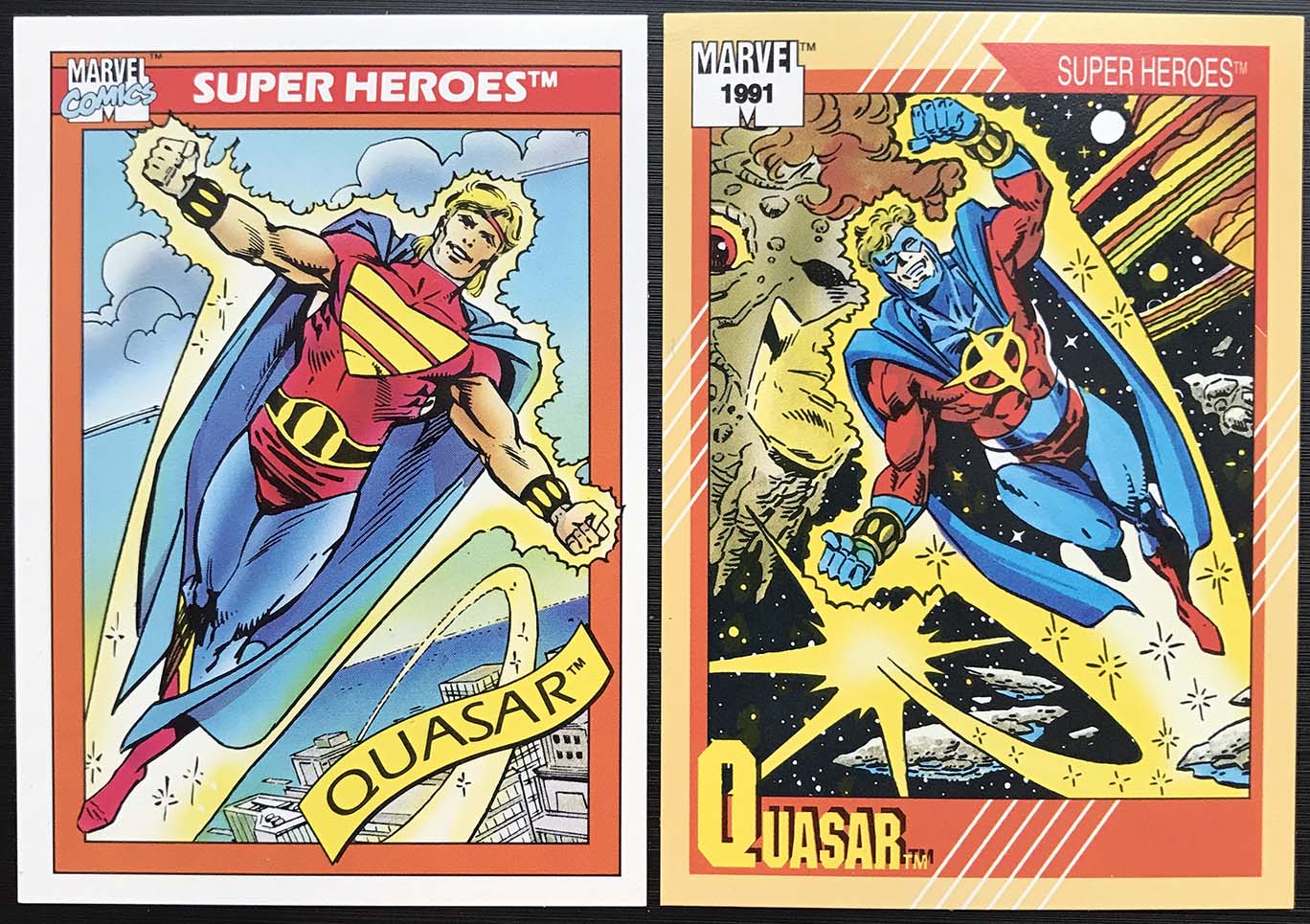 NEXT: Time to stick the landing with an in-depth look at Mark Gruenwald's legacy on the next and final OVERWORD. 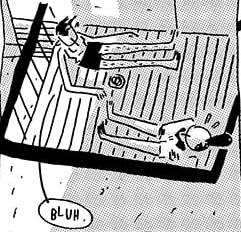 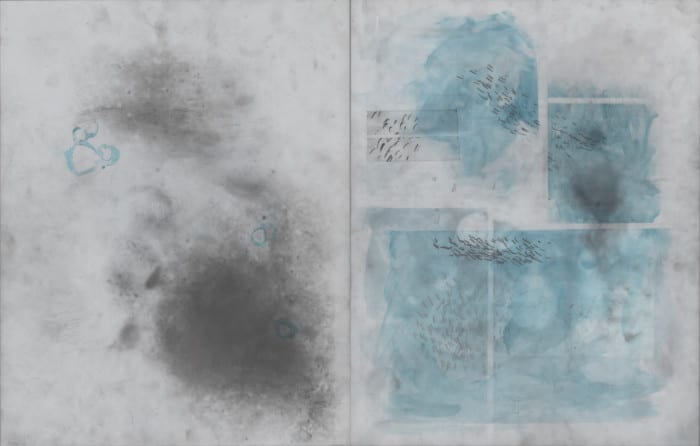 The Materiality of Comics