Today on the site, Greg Hunter brings us the latest episode of his excellent Comic Book Decalogue podcast, this time featuring Katie Skelly, who talks Kyoko Okazak, Dave Cooper, and Nabokov, among other things.

“The only revenge we have as Mexicans,” he often said, “is to laugh at the powerful.”

His books, many with provocative titles, included “Marx for Beginners,” “The Dictionary of Human Stupidity,” “The True History of Uncle Sam,” “100 Proposals to Save What Is Left of Mexico,” “Hitler for Masochists,” “The Stomach Is First” and “Would Jesus Christ Have Been Catholic?”

While a Chicago Academy of Fine Arts student in 1957, Locher was tapped to do some inking for Chester Gould, the creator of the "Dick Tracy" strip. He went on to work as Gould's assistant for the next four years.

"He had regimented working requirements," Locher said of Gould in a 1981 Tribune interview. "Be in at 7:30 every morning, have everything completed by Friday, no excuses."

Locher left Gould's employ in 1961 and eventually headed an art studio in Oak Brook called Novamark. In 1973, despite having no experience as an editorial cartoonist, Locher was hired by the Tribune. He remained on staff until his retirement in 2013, producing more than 10,000 drawings on a raft of topics.

—Interviews & Profiles. Jezebel talked to Mimi Pond, with a lot of discussion of work (there should be more of that in the comics world).

I was able to work a lot more when I cut back to part time, that made an enormous difference. When I was doing it full time it was kind of all-absorbing. It was exhausting, and it made you hate people and hate the world. Which is really bad. [Laughs] It’s a bad way to see the world. When I was able to cut back my schedule to full time, I had more time for myself and my work, and it made a tremendous difference. Having had the experience of working full time, it gave me more motivation to try to get out and pursue my dream of going to New York.

A recent guest on the Process Party podcast was Darryl Ayo.

Panel design and structure matter a lot to me. I did a bit of teaching from 2012 to 2015 or so and one of the things I found myself focusing on with certain students was how panels work and what happens to storytelling when they change in various ways. Some cartoonists do great things with a simple grid. My two biggest comics influences, Hergé and Chester Brown, use very simple panel structures in their comics, and they were brilliant with it. But I can’t keep from playing around with panels. 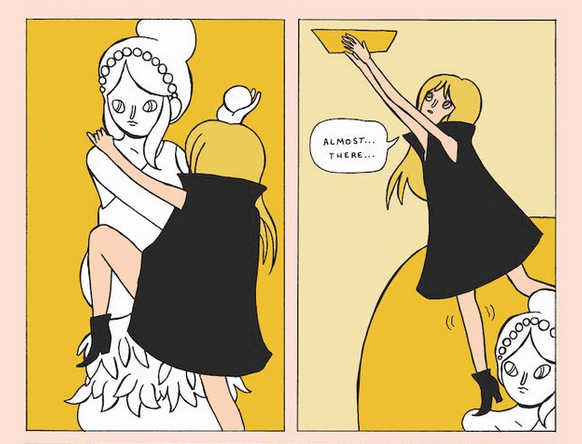