Everything's back to normal here now. First, R.C. Harvey is back with the third installment of his multipart series exploring the legendary feud between Ham Fisher and Al Capp. In this section, Fisher meets Capp and things start to take off.

Fisher’s self-aggrandizing embroideries betray his version as somewhat fictional — his generously offering lunch to an impoverished stranger, Capp’s naming Joe Palooka his favorite strip, Fisher’s taking pity on the poor lad and creating a job for him. Later in the article, Edgar quotes Fisher claiming to have “started the trend of comic strips away from vaudeville skits toward continuous adventure stories”; in fact, by 1930, Roy Crane at Wash Tubbs was well into telling adventure stories that continued from day to day. Fisher also told Edgar that he “innovated the use of current events as story backgrounds”; I suspect Caniff was a little ahead of Fisher with Terry and the Pirates set in China.

According to the Capp clan’s version of the events of his employment on Joe Palooka, Fisher, after a few months, went off to London on a trip with Flagg — just disappeared, Capp said. Interviewed by Carol Oppenheim at the Chicago Tribune on the occasion of his retiring from Li’l Abner in November 1977, Capp said, while Fisher was gone, the syndicate phoned and asked for four more weeks of the Sunday strip.

“Out of loyalty,” Capp said, “I didn’t mention Fisher’d vanished. I wrote the strip myself. But I wasn’t going to have anything to do with that stupid prizefighter; so I put in my own characters — the hillbillies. They were hilarious. But when Fisher came back, he fired me.”

Capp maintained that he’d conjured up the hillbillies from his memory of those he’d seen in his youth on that fabled trip through the South; he took Joe Palooka into the hills and staged a match between the champ and the meanest of the hillbillies, a ribaldly uncouth character named Big Leviticus. This episode became the bone of contention between Fisher and Capp, giving rise eventually to the most scandalous incident in the profession’s short history.

Ellen Lindner is back, too, with the second day of her Cartoonist's Diary.

And we also have Jason Michelitch's review of Tommy Redolfi's biography, Marilyn's Monsters.

Marilyn's Monsters is a new book trapped by old ideas, and Tommy Redolfi is an artist overpowered by the myths he seeks to manipulate. Redolfi's book is an attempt at a dark allegorical fantasy version of the life and death of Marilyn Monroe. While effectively creepy at times, with a few intriguing conceits within its nightmare vision of Hollywood, mostly it seems that the energy of Monroe -- her particular mixture of power and tragedy -- proves too wild and elusive for Redolfi to know what to do with. He ultimately falls back on cliches, both in his understanding of Monroe and in his use of genre tropes, and for all the Lynchian dread and ghostly weirdness Redolfi can muster, the book doesn't really deliver much more complex a take on Marilyn than Elton John does in "Candle in the Wind."

The story follows Norma Jeane, soon to be Marilyn, as she travels from Nowhere, America to the land of Holy Wood, a magical forest settled by vaudeville performers and transformed into the source of the world's movies, which are sent hither and yon through a complex system of iron pipes. Here, Norma will be scouted by the shadowy, eldritch powers-that-be, and transformed from a human woman into the ethereal, glowing icon of Marilyn Monroe. It's a weirdly charming plot conceit that places us firmly in the realm of allegorical fable, and Redolfi's art presents almost all the human characters as something akin to grotesque New Yorker caricatures. Everyone and everything is a little (or a lot) unsettling to look at, which makes the eventual introduction of Marilyn as a literally glowing beauty queen all the more pronounced.

Gaydos joined Oni in April last year as editorial director of licensed publishing, following a multiyear stint at IDW Publishing, where she was group editor of titles that included Star Trek and Jem and the Holograms. At Oni, based in Portland, Oregon, she was responsible for existing titles such as Rick and Morty, as well as acquiring and developing new projects based on existing intellectual property.

In a blog post, John Porcellino announces that he will be pulling back on his work providing comics distribution through Spit and a Half.

Like all of us I'm sure, I grow more and more alienated from the modern world with each new day. I'm broken down by the constant cycle of bad news, horror, stupidity, greed, anger. In the pre-Distro days, if I was overwhelmed like that, I'd be able to retreat for a while, hide for a bit, regroup. Draw, think, walk in the woods, heal. But with the Distro that's an impossibility. There's always another email, always another order. PLEASE don't get me wrong, I'm incredibly humbled by and grateful for the support the Distro has gotten from the community. It's an honor to serve you all! But the time has come for me to pass on this mantle to the next generation. It's just not a job one old dude can do on his own anymore.

Still, in reading the whole of Berlin, the immersion in a historical urban environment is secondary to the political dilemma that confronts the characters. Berlin features a large and diverse cast: workers and plutocrats, communists and fascists, bewildered liberals and political activists, Jews and anti-Semites, pacifists and street fighters. What unites them is the shared experience of living in a crumbling democracy, where economic chaos, distrust of the established order, and rising violence all work to destroy social cohesion. On a personal level, this means the characters are all tested, again and again, to show empathy, and even the best of them sometimes fail these tests. But the redemptive thrust of the book comes from the resilience of solidarity and hope even in the darkest times.

There are mysteries within the mystery, and for Dery the mystery that matters most is that of Gorey’s sexuality — he gnaws away at it relentlessly throughout the 400-odd pages of his narrative. Was Gorey straight? Not very likely. Was he gay? Probably, but not actively. Did he have any sexual life at all? Was he asexual? Gorey himself addressed the question in an interview he gave to Boston magazine late in life. “I am fortunate in that I am apparently reasonably undersexed or something. I’ve never said that I was gay and I’ve never said that I wasn’t.” Responding to the direct question “What are your sexual preferences?” he replied: “Well, I’m neither one thing nor the other particularly. I suppose I’m gay. But I don’t identify with it much.” Dery makes much of the fact that when the interview was reprinted after Gorey’s death, the final two sentences were suppressed, but by the time this particular reader had reached Page 410 of “Born to Be Posthumous,” he was so tired of the endless speculation that he wouldn’t have perked up if it turned out that Gorey’s interests lay in extraterrestrials.

Noah Van Sciver is an extremely talented alternative cartoonist probably best known for his hilarious series of books about his poet-manque character who calls himself Fante Bukowski. One Dirty Tree is about his growing up in a run-down rental house in New Jersey. the street address was 133, and it had a dead tree in the front yard which lead one of his brothers to name it One Dirty Tree. He was from a Mormon family with 7 brothers and sisters, including Ethan Van Sciver, who has become one of the faces of Comicsgate. Ethan is a very talented artist who was quite successful for a while drawing mainstream superhero comic books. But he drifted over into far right politics and online harassment, burning many bridges. Noah never mentions this aspect of Ethan's life in the book, but he does depict Ethan as a budding comics artist creating his character Cyberfrog while still a teenager. Amazingly (or maybe not), Ethan is still trying to make a go of Cyberfrog, crowdfunding it to self-publish it. To me, these two brothers are exemplars of the difference between mainstream and alternative comics. Not because of Ethan's politics (although there has always been a whiff of the fascist in superhero comics), but in that Noah has advanced to a much more subtle and adult type of storytelling while Ethan, a 44 year-old man, is still drawing fucking Cyberfrog, a character he made up in high school.

At Jacobin, Imen Neffati argues that the Charlie Hebdo of recent decades is a betrayal of its original leftist ideals.

Created in 1969 by François Cavanna and Georges Bernier (alias Professor Choron) — both from working-class backgrounds — Charlie Hebdo began as a weekly supplement to another magazine, Hara Kiri, which had established itself in 1960s Gaullist France as an anticapitalist, anti-consumerist, alternative, avant-garde, and counter-cultural form of journalism, reliant on parody and surrealist content. Habitual objects of Charlie Hebdo and Hara Kari’s attacks included powerful institutions such as the advertising industry, the army, and the Church.

The project took a particular turn in the 1990s. Charlie Hebdo had been discontinued in 1981 just a few months after the election of France’s first Socialist president, François Mitterrand, and Hari Kiri followed suit at the end of that decade. When Charlie Hebdo was resurrected under the editorship of Philippe Val in 1992, a specific fraction of the working class — immigrants — and a specific fraction of immigrants — Muslims — became its targets.

Miller’s contour lines are thinner than [Klaus] Janson’s, they have less thick and thin contrasts and make for a flatter result when looked at in black and white. But the restraint seems like a deliberate choice that allows Varley’s colors to play a significant part in the image making instead of it being an afterthought. It’s subtle, and in no way am I saying that Janson’s inks are bad – its just a slight difference that has recently been made apparent to me after years of feeling that some panels were slightly different than others. Below is Janson on the left and Miller on the right: 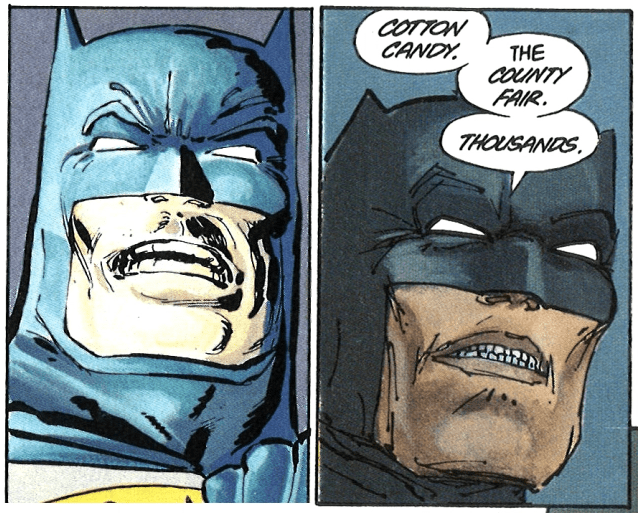 Janson’s rendering is slightly more “realistic” looking, Miller more caricatural. Janson inks the shadow on the bridge of the nose, Miller leaves it open for Varley to sculpt. Look at the thicker brush strokes used on the left in comparison to Miller leaving shapes empty and letting Varley use color to create definition.

To be candid, I struggled to get into this book. The title Uncomfortably Happily is awkward, suggesting perhaps that something idiomatic failed to translate from the original Korean. (I speak Korean like a five-year-old, so don’t ask me if this is the case.) It’s also very long — almost 600 pages — and dense, full of smallish panels and a lot of text. The images themselves are drawn in a rudimentary style, to the extent that it can be hard at times to differentiate between Hong and Lee.

Moreover, the book presents Hong as highly irritable and full of complaint. At the start, the copyeditor of the press he works for calls to request revisions on the comics series that Hong is writing for them. Hong resents being called so early. He resents requests in general. He resents having to work. All of this resenting doesn’t make Hong a likable person.

But as the story progressed I began to appreciate its willingness to let Hong’s flaws show. 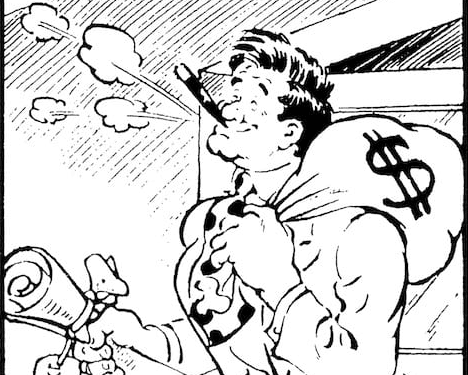 Hubris and Chutzpah: How Li’l Abner Kayo’d Joe Palooka and Both Their Creators Came to Grief (Part 3) 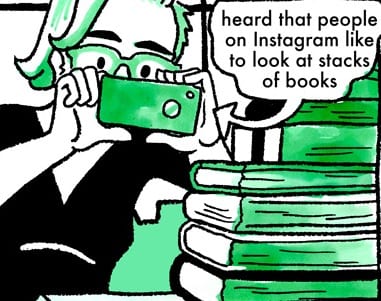