As I recall, the first cartoonist I wrote a fan letter to was Milton Caniff. That was in 1946, about the time it was announced that he was going to quit Terry and the Pirates. I was awed a few weeks later when an airmail letter arrived at my Berkeley home with a small hand-colored autographed drawing of Pat Ryan. It wasn't until a few years later that I learned the drawing was a print and that Frank Engli had done the lettering and Caniff’s other assistant, probably Ray Bailey, had colored it. Besides being a pretty good artist, Caniff was a master of public relations. Just about anybody who wrote him a fan letter got an autographed print—Pat Ryan, Terry, the Dragon Lady, etc.

Over the years I persisted, writing to comic strip artists, comic book artists and a few sports cartoonist. I heard from Bill Everett, Bob Lubbers, Will Eisner, Bart Tumey, Norman Maurer, Frank Godwin, George Storm and a host of others. Being a packrat by nature, I held onto all the letters and drawings that I got, and tacked many of them on my bedroom walls, until I moved across the Bay to play the ad game at a San Francisco agency when I was 22. By the time I left advertising in the late 1960s, I had gathered a substantial collection of letters.

We—my wife and son—moved to the East Coast in late 1968. I concentrated on writing science fiction novels, initially for Doubleday and Ace. I added mystery novels a few years later. And I started selling nonfiction books, chiefly about comic strips and comic books. I also got to know Jerry DeFuccio, who was an associate editor at MAD. He was a gung ho Golden Age comic book fan and it was his ambition to do a definitive history. He amassed a large collection of material, comic books, letters, original art, etc. But Jerry just could never get around to writing it. In fact, the pieces on C.C. Beck and Norman Mingo that he was supposed to write for the Overstreet guides and which he signed, he could never quite get around to writing. I ghosted them for him. In the final years of his life, when he realized that he'd never do the Golden Age book, he turned over a great many of the letters he'd gathered over to me.

For my initial outing I’ve decided to reprint a letter that I unearthed recently from the stuff DeFuccio had sent me some years ago. It's dated 11/8/84 and is from Howard Sherman, who co-created Doctor Fate for More Fun Comics #55 (May, 1940). Jerry had asked the artist questions about his work in comic books. I think he was disappointed that Sherman was not as enthusiastic about the Golden Age as he still was. On the envelope he had written  “not much here”. Actually there's quite a lot of information in Sherman's four-page hand-lettered reply. Some of it informative, some of it rather sad. 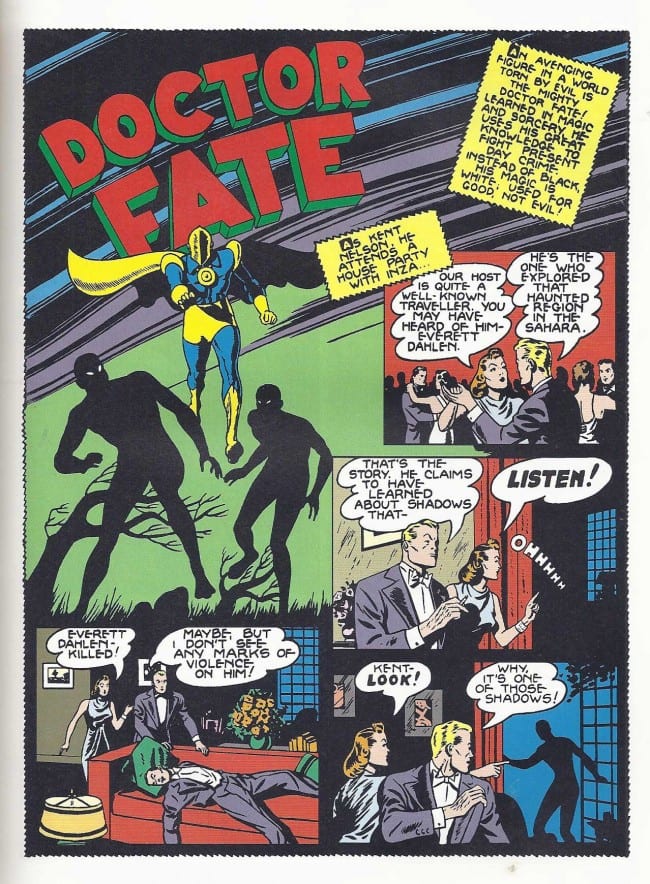 The early Doctor Fate adventures offered somewhat grim, spooky and unsettling yarns to the young readers of More Fun, creepy stories that added some horror pulp criteria to the comic book's definition of fun. An early caption spoke of the good doctor, who wore a blue and gold costume and a golden helmet that completely covered his face, as "a man of mystery, possessor of ancient secrets.” He dwelled “apart from mankind in his lonely tower north of ghost-ridden Salem” and called “upon ancient sources for the power with which he fights unusual crimes.”

The scriptwriter, and co-creator, was the impressively prolific Gardner F. Fox, who also invented The Flash, Hawkman, Zatara and the Justice Society to name but a few. A dedicated reader and sometime contributor of pulp fiction, Fox borrowed quite a bit from Weird Tales and H.P. Lovecraft and his followers. Howard Sherman had the ideal style to illuminate Fate's arcane caseload. In the doctor's first year or so in business he tangled with a green-tinted wizard bent on destroying the Earth, went for a boat ride on the River Styx, called on someone called Wisdom who had some of the attributes of God, Doctor Fate overcame mean-minded lost souls, invaders from another planet, killer robots, fish-men, an evil Mayan god and a faux leopard woman. 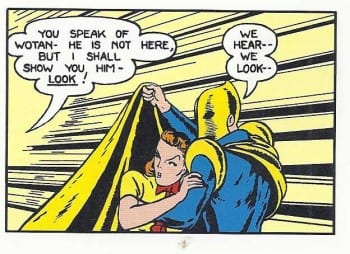 Doctor Fate's constant companion was an attractive young woman named Inza Cramer. Always well dressed, whether casually or formally, she shared many of his supernatural encounters and he frequently saved her from fates far worse than death. Sherman enjoyed drawing these weird tales; his layouts were inventive and added to the unsettling fantasy elements. He says in the following letter that he was “slower in production than some of the other artists. It took me about 10 to 14 days to pencil and ink 6 pages.” For that two weeks of work, he was earning, according to the early page rate he mentions in his letter, $72.

Despite his meticulous and thoughtful approach, his pages are fast moving and rich in aptly gloomy settings, monumental explosions, huge fireballs, furious storms and many another Saturday matinee serial touches. In the letter you'll learn quite a bit about his career from a talented artist who labored in comic books during the Golden Age, before anybody was calling it that, then moved on to other things.

NOTE: In 2007 DC added The Golden Age Doctor Fate Volume 1 to its hardcover Archival Editions series. Over 350 pages of Howard Sherman’s work. You might also glance at the few Fate stories done by other artists to get an idea how much better he was than quite a few of his contemporaries. 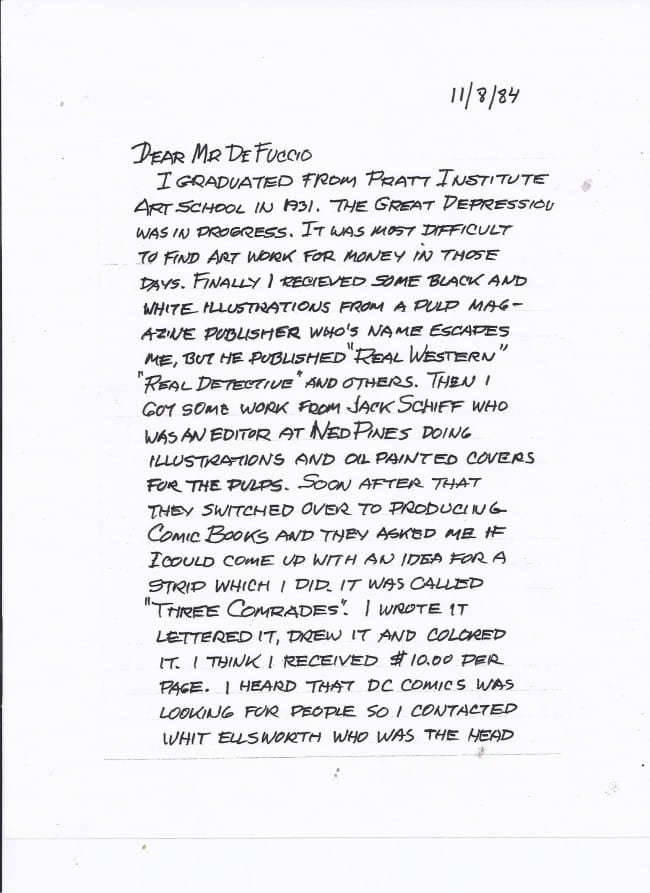 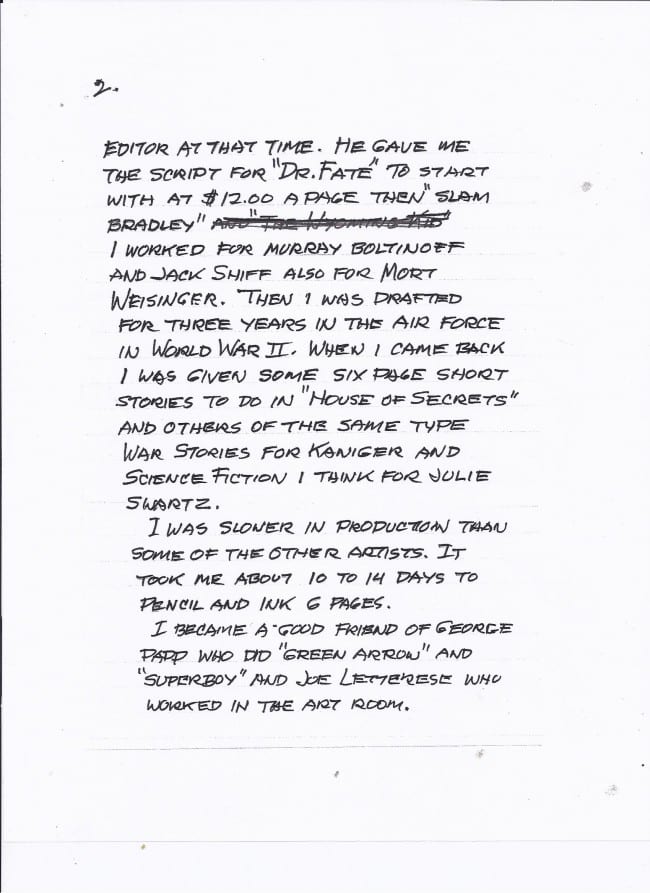 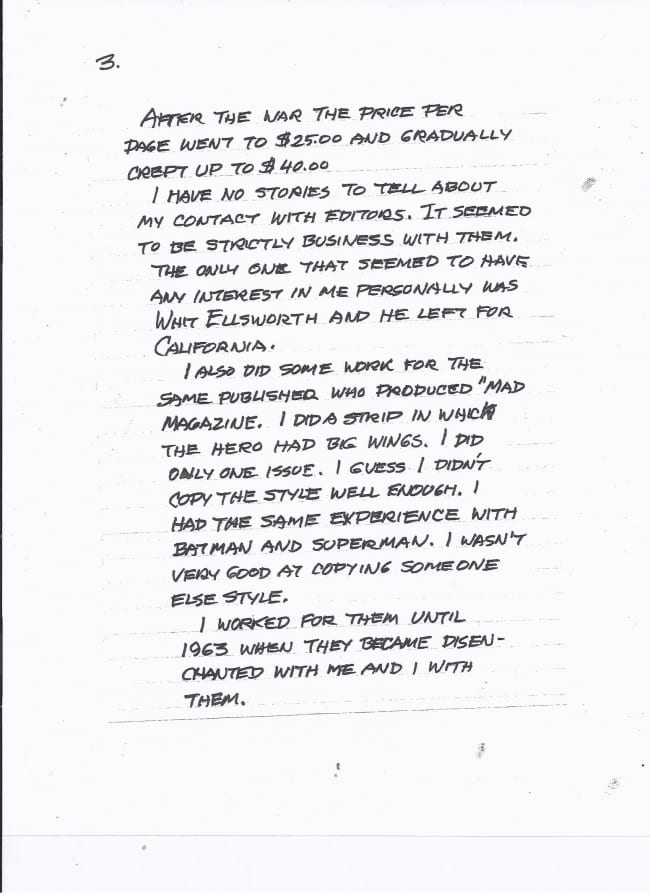 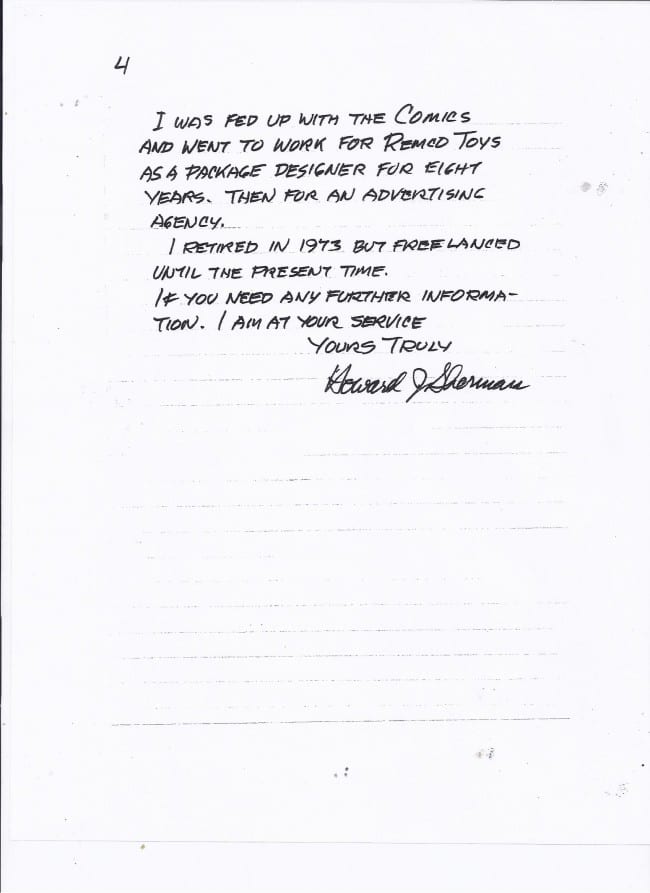