Carving out the influences that formed the idiosyncratic drawing style of Alex Niño appears to be a highly complex exercise. In his story “Tap-Dancing on a Tender Cerebellum,” done for Heavy Metal in 1978, the Philippine cartoonist, born on the first of May in 1940 in the province of Tarlac on the island Luzon, names artists like Moebius, Arthur Rackham & Heinrich Kley.

Kley was a regular contributor to the German magazine Jugend, which lent its name to the stylistic direction known as Jugendstil, i.e. Art Nouveau. His close proximity to Niño shows in the depiction of topographic subjects. Much more interesting, however, is the conceptual relation between Niño's "Tap-Dancing" and namesake Alex Toth's "Taps," from 1981. In “Taps,” Toth manages to perform a rare feat; the transmission of music – or more specifically – translating its rhythmic structure and sound texture into panels, something partially accomplished by Michel Fiffe's coloring shown in Looking for the Perfect Beat from Zegas #2 or Rapper KRS-One supporting Kyle Baker on Break the Chain!, which hit readers with a tape.

In its narrative technique, meaning singular images that are often strung together by sequences, comics and music share a kinship on principle. But trying to visualize a melody, or rather depicting a sequence of tones, i.e. changing between sensory perceptions, is an artistic endeavor requiring an elevated level of mastery, and its one Alex Niño accomplishes in Tap-Dancing on a Tender Cerebellum by arranging panels in a repetitive order – provided that there are partitions in his pages at all – thus creating panel-free offbeat compositions reminding one of archipelagos.

Separate figurative elements are fused as a main theme, which subsumes all the motifs previously used and places them in the center of the suite, i.e. page, not dissimilar from a cluster, gradually getting louder. Even more radical is the wordless An Alien in New York from 1983, which repeats motifs and thereby composes its score as an equivalent of a musical background when utilizing scenery already introduced but now blurred towards dissolution.

Alas, further influences that were shaping Niño emerge out of his biography: At six, the cartoonist found a tool given by nature when he started drawing pictures in the sandy beach near his parents' house, further enabling him to create endless variations of a picture.

Another incident, also featured in Manuel Auad's highly recommendable but sadly unavailable The Art of Alex Niño, tells the story of how Niño, shielding his head during a rain shower with some of his drawings, found them bestowed with a washed-out look because they were done with shoe polish instead of ink. Totally unintended, this effect left a huge impression on his editors, as well as significantly influencing his future style. Niño's use of ornaments, floral themes brought to a consistent conclusion and executed in thick ink lines as a logical outcome of calligraphic elements, reveal a vertiginous impression – especially when incorporated into his insanely laid-out pages.

The result is a surrealism propelled by an expressive linework and a coloring not reliant on naturalism. In an untitled story featuring the pirate Captain Fear, who was co-created by Niño with writer Robert Kanigher, he plays with the perception of the reader by staging emotional states of the protagonists and using appliances emanating from abstract expressionism. Within the limitations of a comic book story from the 1970s this is an unusual modus operandi. The utilization of thick brushstrokes can be observed, an overall and characterizing attribute of the drawing style predominant in the Philippines back then. Also recognizable is the influence of Alphonse Mucha, who incorporated decorative items in a formative way into his works thus defining Art Nouveau.

Germany was already an influence for comics from the Philippines at an earlier stage. José Rizal, an universal talent, national hero, and, besides that, forefather of Philippine comics. While attending medical lectures in Heidelberg in 1886, Rizal met the parson Karl Ulmer. During his free time Rizal created a comic strip for Ulmer's son, which was named The Two Brothers and showed the influence of Wilhelm Busch, one of the fathers of modern comics. However, it appears likely that the late Gerry Alanguilan tried to commemorate fellow countryman Rizal's legacy by creating a monument in comic form, but sadly, never got to finish it. Rizal, a medical doctor who also worked as a writer and artist, was in charge of the fight for independence from the Spanish colonial masters, which lead to him ending up in front of a firing squad. So there's some irony hidden in the detail that it was of all things cartoonists from Spain and the Philippines that turned out as creative pacemakers and catalysts being in an aesthetic kinship while making waves during the 1970s, especially in publications released by publisher James Warren.

Because colonial rule over the Philippines always went along with gaining influences on the local comics scene – another evidence would be the establishing of the comic book as a common form of publication in consequence of the Philippine-American War and the subsequent occupation of the archipelago. Yet even the comic book was actually launched during the 1950s there, the history of Philippine comics starts out at a much earlier date – the magazine Liwayway published the comic Kenkoy by Antonio Velasquez and Romualdo Ramos as early as in 1929. This should spawn one of the biggest comics productions between the 1960s and 1980s.

The short-term Japanese invasion on the islands in the West-Pacific region during World War II did not have much impact on the local comics scene. While a lot of artists from the Philippines later succumbed to manga's victory march as global and preferred means of expression utilized by present-day youth culture, not everybody among the resident creatives shared that kind of enthusiasm.

Aesthetic differences aside, the deliberate acceptance of widespread animistic practices via the Catholic Church after the occupation in 1565 by the Spanish throne lead to a strengthened belief in the myths of nature. To this day this influence shows in comics made in the Philippines. This can be viewed in titles like the supernatural thriller series Trese by Budjette Tan and Kajo Baldisimo in glorious black and white or Mervin Malonzo's epic horror tale Tabi Po, which is poaching between sacred images and action painting. The persistence of ancient lore circling around spirits of nature may explain the tendency of Niño and other peers to seize their main activities rather in the realms of the fantastic than the all-prevailing superhero genre. It should be stressed though that there are a lot of playfully designed contributions made by Philippine cartoonists to the much-maligned romance comics.

So these cultural imprints, often wrenched from nature, can be tracked down in a lot of works created by fellow countrymen like Nestor Redondo, Alfredo Alcala or Tony DeZuñiga. The latter, by the way, became an object of scathing criticism for being a go-between in the Filipino invasion, a venture which – initially intended to employ cartoonists from the Philippines in the USA – changed the face of US-American comic books by allowing these publications to develop a much broader range in terms of style. It also gave the impression of Filipino artists as cost-saving fill-ins and industrious all-rounders. For Niño, this image sometimes turned out to be a simultaneous asset and drawback. 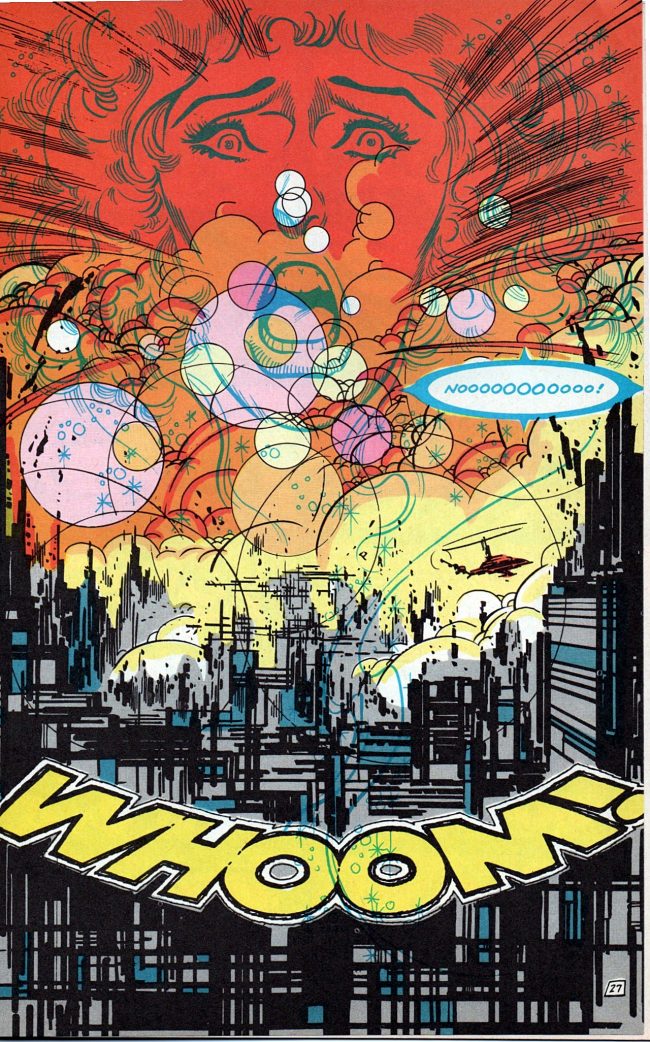 Examples? The attempted art chore takeover of the outstanding Thriller series by Trevor Von Eeden during the 1980s, as well as drawing the epilogue to the mainly Paul Neary-drawn series Hunter in 1977, called “Hunter III: What Price Oblivion.” The latter marks a parodistic and noteworthy watershed in a serial otherwise bursting with cliché, while Thriller had been so strongly identified with its original draughtsman that it would have probably been preferable to never conclude it, even with an equally skilled artist.

However, the love for the uncanny and the impact of living in a society rooted in animism served as inspirations for two of the most impressive showcases in Niño's career: 1975's portfolio The Fantasy Worlds of Alex Niño and the splendid coffee-table book Satan's Tears from 1977, which unfortunately never saw a reprint. Also, Niño being a protege of the aforementioned Byron Preiss lead to the Doug Moench-written adaption of Theodore Sturgeon's pioneering science-fiction novel More Than Human in 1978. Not his first encounter with genre-defining science fiction: In 1975 he drew adaptions of Harlan Ellison's “‘Repent Harlequin!’ Said the Ticktockman” and Michael Moorcock's “Behold the  Man,” wherein Niño's verve shows in his idiosyncratic designs done for the narrative leagues of such kind.

If that ain't doing justice to your critical glance, then I'd recommend to take a look at a page lifted from H.G. Well's The Time Machine adaptation out of the Pendulum Illustrated Classics series, which was published during the 1970s. The playing off of contrasts against each other while realizing an oppressive impact by utilizing flats and a linework for a dynamizing thus kinetic effect, is master class. Not to mention the cooled down colorization in shades of blue as well as the use of otherwise unexploited white gutters for threatening elements continuing their way into the picture makes proof of an extraordinary visual conception.

As is what he had at the end of the 1990s while killing some time when working on Disney's Mulan, where he was responsible for designs and storyboards. Later he was pulling out all the stops again in Dead Ahead (2008-2010), a rather unspectacular tale of zombies bobbing up and down at sea, thereby causing a hallucinating world of images. Herein Niño engages in the complete dissolution of conventional page design in favor of a continuous mural painting. It would be quite interesting to see this published in a way that doesn't subject this visual tour de force to the restrictions of the comic book format, something that could bear the brunt of homage to the early dawning of sequential storytelling, starting with the Bayeux Tapestry. What Niño's achieving here is the brutalist elegance of one Philippe Druillet, with crests of waves transforming into faces distorted with pain while initiating a never-ending process of unhesitating metamorphosis.

While officially retired for a few years now, Niño let off some steam in 2013 by visualizing a story for Batman: Black & White, which is documenting his moving towards the use of sketch markers. And although being an innovative and formative stylist, he's never earned the recognition he deserved, like a Krigstein, Toth or Raymond did, albeit while still having, like them, to visualize the occasional bad plots. So it's still a mystery why there isn't any artist's-or-whatever edition collecting his varying and impressive body of work until today – his 80th birthday would've been a great opportunity to make that happen! 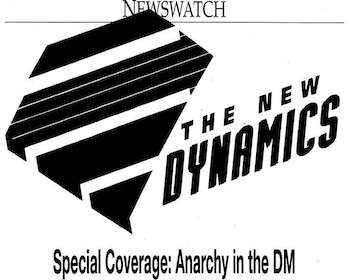 The New Dynamics: Anarchy in the DM 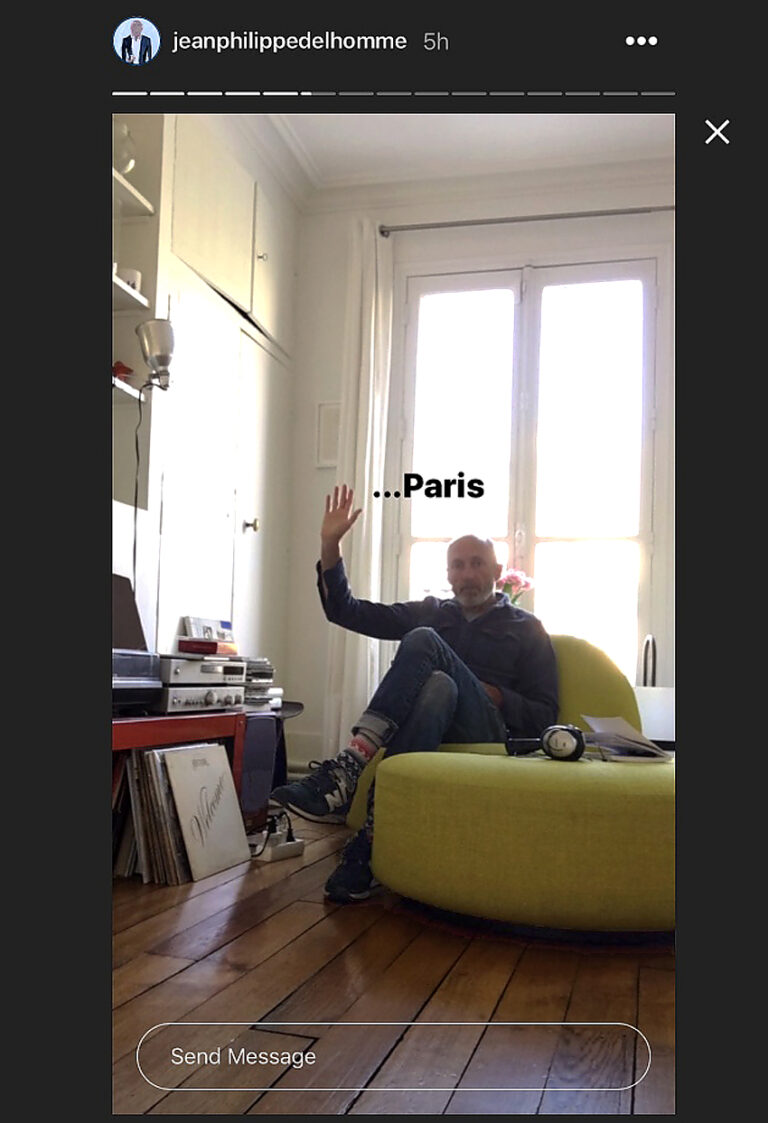