Today at The Comics Journal, we're pleased to share our latest in a long-running but never officially titled series where one comics creator gets into the heart of this thing with a fellow comics creator. Today, it's living legend Jaime Hernandez alongside the critically acclaimed and diabolically talented Katie Skelly. I hope people read the shit out of this one. I've gone through six (!) different things to copy and paste as the teaser. It shouldn't be surprising that our greatest living cartoonist makes for such a tremendous interview subject, I suppose.

In the new collection, the panels where Maggie is lying on the bed with Ray and you have that wonderful foreshortening of her leg, you can see exactly where her weight is shifted to, and how she’s existing in space -- in one hundred thousand years, I could never get something down where people would be able to parse that line. And that’s a very easy visual vocabulary for you at this point. Do you ever feel awestruck by that? Do you ever search your work for places you could improve?

Well, say the panel you’re talking about -- I probably went like, that’s the ticket. This is exactly what I wanted to portray here. It’s not always, but there’s certain images where I just know that’s the one. I didn’t need any words for it. When I was 16 I was drawing and then I sat back and looked at it, I realized I’d gotten to the point where I can draw anything I want. And of course there were a few more years where I had more to learn, and how to polish it up and get things right, and I’m still doing that. But I guess that’s another reason I wouldn’t trade this for something else is because I can get the exact moment -- not always -- but I can get that exact moment of exactly what I’m thinking. It’s kind of like -- this could go in a different direction, but what the fuck -- it’s kind of like people with fetishes. People have to go to stores to buy that, people have to look at DVDs, they have to seek that out. I get to draw exactly what I’m thinking.

Our review of the day comes to us from Keith Silva, fresh of vacation and full of vinegar. He's here with a look at Neon Future #1, which is connected to an incredibly successful series of albums released by Steve Aoki.

Neon Future uses ambition and cloying vanity to paper over a vapid, derivative and insipid story. What merits it possesses function as a quasi-Turing test of its reader’s credibility, viz. heart-on-sleeve devotion to 1990s comics and the imitative sci-fi that slouched out from placental expulsion post-Matrix.

Those are its redeeming qualities. It gets worse.

I'm not the kind of maniac who would say "I'm glad Steve Ditko died before he could see this", i'm the kind of maniac who wished I had died before I saw it. What an atrocious cover design! (Is this the random blog entry where I confess that I've read the first nine issue of Doomsday Clock and found them to be a complete delight, and would argue it's the best comic that Geoff Johns has written since he did those psychotic Doug Mahnke comics where a leather covered Green Lantern villain spooned with the dead bodies of his parents? Looks like it! Like that comic--and the taste-free gonzo murder festival that followed, which included Donna Troy battling a zombiefied version of her infant son and a three issue grindhouse retelling of Assault on Precinct 13 set inside a Gotham City police station--Doomsday Clock is packed so firmly with wacked out numetal choices that Scott Snyder is probably stomping around the DC offices in his pajama pants right now trying to remind everybody that he used to be cool too. It's been so long since I've seen Johns go this fucking hard that I forgot how fun the guy used to be when he had something to say--and while "Fuck Alan Moore" isn't a very catchy tune, I have to admit, he sure is singing it with gusto.)

Over at Newsarama, Chris Arrant's tireless commitment to keeping up with the various job postings related to comics publishing has paid off with an article about DC making the best decision they've made since giving the okay to publishing Doomsday Clock, which is that they're casting a net for a new hire in such a way that they might actually end up finding somebody from outside of the comics world. Here's some simple math that's eluded every major comics periodical publisher for the last however many decades: if the pool of people who are available for a given job have a track record of being really shitty at that given job, then don't hire from that pool of people. People who have a history of failure, bad ideas, and/or sucking in general will invariably continue to fail, think of dumb shit, and suck. At some point, it's not recycling anymore: it's just garbage.

Over at Comicosity, there's an article that I don't even know how to process. If you've got years of experience knowing that the way you talk about comics on dates tends to derail the date, why would you assume that the solution is to talk even more about comics? Why not try like--A) listening or B) talking about different subjects or C) at the bare minimum, not assume that the reason that monomaniacal monologuing alienates people is because of some ethereal stigma against comics that can be repaired by even more detailed monomaniacal monologuing? There's entire swaths--swaths in this case meaning millions--of people who love jabbering about baseball statistics but are at least able to put a cork in it during the dating process so that the person on the other end of the table gets a chance to talk too--why does it never seem to occur to people who like talking about Tom King comics that shutting the fuck up can be a viable, sexier alternative to talking about Tom King comics?

Abhay found this David Letterman clip where he talks about Harvey Pekar. I think Harvey would have been proud to know that the prospect of Letterman talking to Howard Stern about Harvey Pekar is what is being used by Sirius Xm as the teaser to get people to sign up for Sirius Xm.

“I Wish I Could Do It All”: Jaime Hernandez Speaks to Katie Skelly 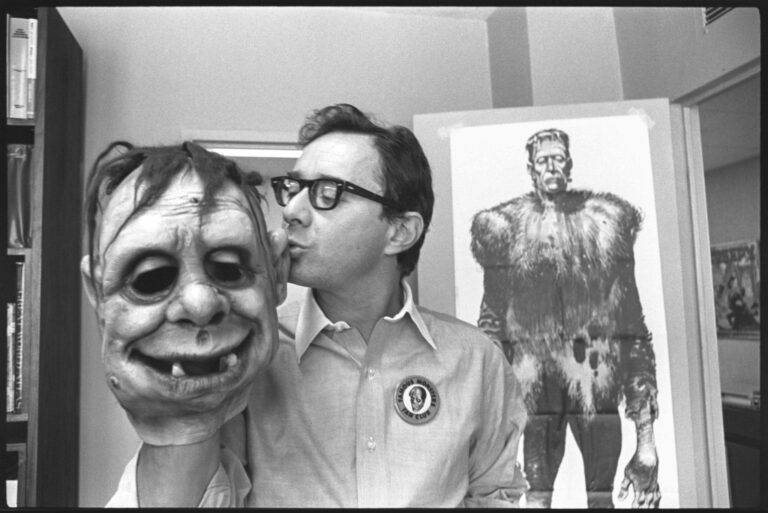 “He Was an Odd Individual Who Really Pushed the Boundaries”: An Interview with Bill Schelly about James Warren