On the site today...

Your weekly comics from Jog, in which he deals with the issue of weight in comics. Or heavy comics. Something heavy!

And Rob Clough reviews Keith Knight's Too Small to Fail.

The big "elsewhere" news is Grant Morrison's unintentionally hilarious interview with Rolling Stone. Morrison, who really does believe the hype (in his book, Supergods, he plays himself as a brilliant hero of comics, always at the ready to tap into the zeitgeist) loves to make big statements, like this doozy about his favorite hobby horse, Alan Moore:

We know Alan Moore isn't a misogynist but fuck, he's obsessed with rape. I managed to do thirty years in comics without any rape!

This is [update for clarity/boneheadedness] on the heels of his defense, in Supergods, of the now infamous rape-scene-as-plot device in Identity Crisis by Brad Meltzer, which he calls "Joycean," "heart stopping," and "orchestral". Seriously. I will admit, as Morrison totally predicted (tra la la, we're all pretty predictable), that I found Supergods mostly not so great. Not because I didn't understand what he was trying to do (superheroes as modern myth, how the genre can have personal meaning) -- I did. I even fully go in for the idea that there's great life in the genre and that fantastic work has been and will be made. And on some subjects Morrison is great. His explanations of what makes Jim Starlin, Don McGregor, and other writers of the 1970s great is smart and concise. And his description of Image Comics and its place in the larger culture is the best I've ever read. But too often it comes back to new age silliness (Captain Marvel as "alchemical" hero) and self-aggrandization (his relative fame, his oedipus complex with Moore) and then, finally, a long patch where he reels off his fave superhero movies (he was the only guy that liked Daredevil! Cool!). It is also is a book profoundly ignorant and dismissive of the actual circumstances under which his favorite toys were created, and the fates of the toymakers. That said, I think it's especially ironic that in the interview he randomly harps on Chris Ware and TCJ (of course he's right that we are smart asses) in economic/class terms. For someone so interested in class and vibes and making the world a better place, one might ask: Gee, Grant, what have you done to help out the economic situations of creators whose shoulders you stand on? Oh right. Nothing. [update: Not that this matters -- critiquing art by arguing that an artist should drop the thing you disapprove of and go do something you do approve of is inane. But Morrison brought it up, so why not go down his logic road?]. Here's the beauty:

I can appreciate someone like Chris Ware for his artistry, which I think is beautiful, but I think his attitude stinks, it just seems to be the attitude of somebody really privileged, and honestly, try living here, try living on an Indian reservation and shut up, and really seeing all that nihilistic stuff, it really makes me angry, it's unhelpful to all of us, and it's coming from people who have money and success to talk  like that and bring those aspects of the way we live in favor of all the  others, and it's indefensible.

So I never liked that stuff, I  always thought that I had a real Scottish working class thing against  the fact that these were done by privileged American college kids, and  they were telling me the world was flat. "You're telling me the world is  flat, pal?" And it's not helpful, it doesn't get us anywhere. OK, so it  is, then what? What are you going to do about it, college kid? My book wasn't academic. I can't take on those Comics Journal guys, they flattened me, as they did, it's just defensive, smartass kids.

My favorite thing about the above is that he assumes Ware (and I suppose Clowes, whose Death Ray, arguably the seminal superhero comic of the last decade, Morrison ignores in his history of superhero comics), Brown, et al are somehow rich college kids looking down at him and casting bad vibes his way. This coming from the guy who endorsed superhero rape in his superhero history. Bad vibes I guess are only ok if they involve Elongated Man? Grant, baby, it's not a class thing and it's not about nihilism. It's just a different, more complex worldview, that's all. Plus, his assessment of Ware's work simply shows he hasn't read it. Morrison is too smart to have read it and come away with that conclusion. And TCJ certainly hasn't flattened him. In fact, aside from a brief mention from Tim, Supergods hasn't been covered here yet. But we did cover, at length, and positively, The Invisibles. Alas.

Anyhow, that interview is just plain sad. Morrison's a creative guy who has written some excellent comics, but here and in Supergods he seems out of touch, casting about, and adrift in what he more or less admits is his most sustained creation: The character of "Grant Morrison" itself. 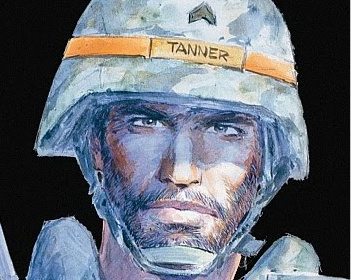 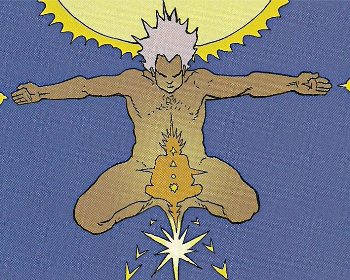 “I Feel Myself Like a Genius and a Sacred Whore”: A Few Questions for Alejandro Jodorowsky