BURNS: I actually had a question about the Siberia bar. I read an off-hand remark you made about it being kind of horrifying.

GRAHAM: Oh yeah. It really was.

BURNS: You were a bouncer?

GRAHAM: Kind of. I worked the door for a while. It was rough. Basically, it had moved to another location outside of the subway station. It was across the street from the port authority in Manhattan. Rich got me a job working the door there on weekends. It was run by this guy, we used to call him a coked-up baby. He would just point at people and be like, “Kick them out.” That was a big part of our job. We’d have to get rid of people for no reason. I remember one of the assistant editors at Vertigo got banned there because he’d brushed into the owner with his backpack.

GRAHAM: Yeah. It was working for a totally insane person. It was really fun sometimes because, you know, you’re working at a bar and there’s pretty girls everywhere and everyone’s drinking. But then the horrible side of it … It was just really unpleasant. I remember seeing people get like date raped in there. It was this incredibly horrible place. If you worked there for a night just kicking people out and being a jerk to people it was 100 bucks. I was getting 30 dollars a page for comics. I tend to align myself with people who are really into seeing what they can get away with. Moritat’s very much like that. I remember Rich went into the Siberia one night and he had this little TV set that he would watch DVDs on, and he was watching the Lord of the Rings movies. There was a guy sitting there who had kind of long hair, and he was explaining to me and Rich how he was really glad the Lord of the Rings movies had come out because it had brought his hairstyle back into style, and that women were going to start appreciating it more. Rich was looking up at him with kind of dead eyes and was like, “Yeah. We’re closed now.” I was like, “Dude. It’s eleven o’clock at night! We’re open till four in the morning!” He’d be like, “I can’t deal with this shit.” He locked the door, and I remember the owner was out of town which was the only way we could get away with this, and we just watched DVDs on his TV set. Whenever anyone would knock on the door he’d mute it and be like, “Ssshhh!” A lot of that kind of stuff. I just have endless stories about Filthy Rich doing ridiculous things. One time these girls came in in like hot pants, and just having this kind of attitude: pretty girls not wearing very much clothing, and Rich, at one point, got fed up with them and was like, “You don’t wear pants? I don’t wear pants!” He took off his pants and he chased them out of the bar. The whole King City thing with Pete and the alien girl was me trying to do art therapy about how I felt working at the bar. Basically, to make a living you have to do shit that you’re not happy with. Another thing I’d do at the bar is when I worked the bar I went out and I got what I called my sissy shirts. Everyone there always wore all black: a very New York bar. I went out and got these really cheesy shirts. I remember there was one that was a Hawaiian shirt with a dog on it that said “Little Beach Bum.” I had a teal shirt that had dolphins on it. So I’d wear these to work. I remember the other guys would ask, “How come you always look like such an asshole?” I’d be like, “You guys are such tough guys, I gotta even it out.” 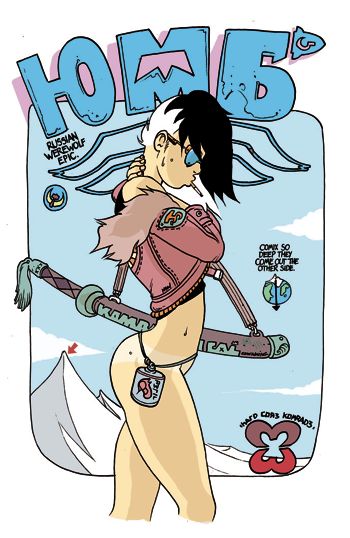 BURNS: Did the owner care?

GRAHAM: Siberia was connected to another bar which was called Bellevue, which is still there. The owner of that was this guy named Jimmy, who I liked a lot. He was taller than me. He was like 6’8’’ or something. He had all these skull rings on every finger and was this huge terrifying guy. One of my main jobs at Siberia … People always used to ask me if I was a bouncer, and I’d tell them that my job was to go get the guys bigger than me if there’s problems. So I’d basically run around the corner and get this guy. I ran into him at a bar, years after I worked there. I remember he just nudged me and said, “What the hell’s with your shirt?” I was just wearing like a black t-shirt. He said, “If I ever see you again in anything but a teal dolphin shirt I’m going to kick your ass.” I think it worked out.

BURNS: Where were you living?

GRAHAM: I was in Queens. I’m spacing on the neighborhood name. I remember me and the girl I was living with at the time went up the street and climbed to the roof of a building and saw the towers collapse. It was really surreal.

GRAHAM: I based Multiple Warheads around that because it was so bizarre to see armed army guys in the subway.

GRAHAM: Yeah. It was so weird because I have such a tendency to make light of everything and it was so weird because me and my friends used to love to joke about stuff and all of the sudden everything got really harsh and dramatic. I remember going to a doughnut place to draw and having some woman come up to me and burst into tears about seeing her priest die on 9/11. He died somehow in the attack. It was really weird to be in that environment. I didn’t know anyone that died, but at the same time … It was a harsh couple of weeks. My friend Ludroe, who’s in town now actually, is living in Tokyo, and he was just telling me how New York around 9/11 prepared him for Tokyo because there was a lot of weird patriotism that occurred around that time that didn’t really have any root in sanity. I remember walking down the street with a friend of mine and there being American flags on every window and me being like, “What country are we in again?”

BURNS: There was that whole thing for months where people were like, “Oh, everybody’s just being so NICE now. Letting people merge when they want to merge in traffic.” (Laughter.) All that garbage.

GRAHAM: I had this panel in Multiple Warheads where Sexica is getting this freezing device with the werewolf penis put in her ass, and her friend is like, “This doesn’t hurt, does it?” And her word balloon has a picture of an airplane crashing into the World Trade Center. I remember being like, “Oh, I’m going to have to change this. There’s no way they’re publishing this. And it just came out. It was republished on the web. It was in the Slipshine book. Nobody commented on it. Nobody noticed. I got this huge feeling of freedom from that. “Nobody cares. I can get away with anything.”

BURNS: Something’s getting pushed up her butt hole. Nobody cares about the World Trade Center.

GRAHAM: Yeah, apparently. It’s like that feeling of getting dressed in the morning and going outside and realizing if you’d forgot your pants no one would tell you until you’re like halfway down the street and someone pointed or laughed. It was like that kind of thing like, “Hold on, there’s no system of checks and balances that stops anything I do.” A lot of times I’ll meet cartoonists and they’ll say, “I have to copy write all my stuff. What if I do this and people react weird to it?” And my attitude has always been, “Nobody pays attention or cares. You can do whatever you want.” 9/11 eventually ended up feeling totally surreal. It sounds bad, but it wasn’t really direct. The stuff I write about, in King City, how there’s crazy shit going on but the characters don’t pay attention to it. It really felt like that. Because a vast majority of my friends weren’t even from New York, and certainly didn’t know business people. Being in a surreal place with surreal stuff going on. That probably influenced me.

BURNS: How did you get October Yen published?

GRAHAM: I would send out pitches in the mail: send out photocopies to different comic companies every couple months. Antarctic Press was really open to submissions back then. I think a lot of people like Derik Kirk Kim starting out there, or at least getting stuff published by them because they were open to new stuff. And they were doing a lot of the comics I was reading like Twilight X and Gold Digger and all that stuff. I just kept sending stuff and that one, I was really surprised, they just wrote back saying, “Oh, this is really good, we’ll publish this.” In the middle of working on it, I think I was working on the third issue and I fractured my vertebrae. I kind of broke my back. I was climbing on a telephone poll. I was trying to do this flip thing off of it, and I ended up flipping myself completely upside down and landing on the top of my head. I had to be in the hospital for a week. So it was my first comic and I was really stressed out and it was late and I was injured. 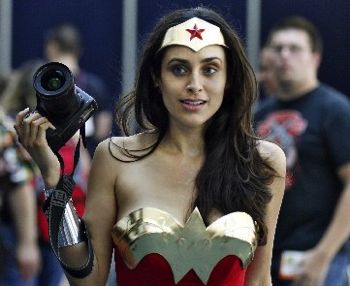 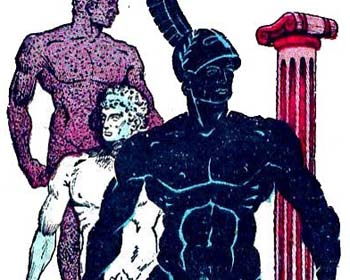