Today we bring you the conclusion to Rob Clough's epic, career-spanning interview with a pivotal figure in modern comics, John Porcellino.

How do you compare the experience of taking acid with your later practice in Zen Buddhism?

A lot of people in the modern world, and probably the pre-modern world too, came to a spiritual sensibility through drugs. When I first took acid, I was a deeply conflicted, miserably self-loathing person, riddled with existential anxiety. I had found different ways of coping with it, or transmuting it -- like punk rock, for example, or art. Acid released me in a large part from that anxiety of self. It was a major turning point in my life. I don’t want to be a guy who suggests to people that they do drugs. It’s a tricky road with lots of danger for bad detours. But for me I have to admit it was a turning point.

Now, I should also say, I wasn’t a guy who took acid and was like, “Hey, let’s get groovy.” It was a sacrament to me. I took it seriously, as seriously as one can take something like that. Well, not like it was a church or some hippie thing. I wanted to be free. Acid was a tool for investigating consciousness, for breaking down that little self, the barriers I had erected between myself and others, myself and the world. I would say I took it twelve times. The last time I took it, I remember right away, I intuitively thought, “I don’t need to do this anymore.” So that was it. It was maybe like ‘89-’91. Acid opened my heart. Instead of fearing the world, I began to love it.

As far as drugs and Zen, this has become a somewhat controversial topic in Zen circles lately. Some people look at Zen, like -- I’m free! I’m Zen! It’s all good, bro. That what the Japanese call Buji Zen. It’s a false free ticket toward doing what feels good. That’s not Zen. The Buddha, in the Ten Grave Precepts, the moral core of his teachings, includes Not to Indulge in Intoxicants. Western people don’t like that because they have a lot of hangups about Christianity and rules and commandments. The Precepts are not commandments—“Do this or else”—they’re guideposts for practitioners. They’re the natural state of an enlightened person. An enlightened person does not indulge in intoxicants. It’s something to shoot for. Anyhow, some people in the west, they look at drugs as kind of an express bus to enlightenment. Well, maybe they can open a door, but they can’t do the hard work for you.

We also begin a new Cartoonist's Diary. Our diarist this week is Colleen Frakes. Day One finds her on the way to an artists' retreat.

Finally, Martyn Pedlar is here with a review of a new nonfiction comic by Ellen Forney, Rock Steady.

In Ellen Forney’s Rock Steady: Brilliant Advice from My Bipolar Life, you’ll learn how to make a game of taking your meds by swallowing them all at once; how to reframe yourself as mysterious when you’re not feeling socially capable; and how to cry inconspicuously in public. Most importantly, you’ll learn about “SMEDMERTS”, which translates to “Sleep Meds Eat Doctor Mindfulness Exercise Routine Tools Support system.”

The fact that SMEDMERTS is pictured as a friendly little monster gives you an idea of the tone of the book. Psychological coping tools are presented as a kind of Batmanesque Utility Belt. A quote from “Fluffy” Flaubert shows him as a cartoon rabbit. Yet Rock Steady is careful and precise, too. It knows no amount of fun diminishes the amount of work mental stability can take. “Getting stable is really tough,” writes Forney. “Maintaining stability over the long term is a whole other challenge. Ideally, it’s less dramatic, but it’s just as demanding.”

"Do you have pets? Do they keep you company while you write?"

No they don't because no I don't have any, though I would love for there to be an animal in my life to keep company with while working. It might be telling of the expectation of living standards in my field to say that I consider the possible situation where I can responsibly adopt a dog into my life to be an upper-tier signifier of success and security.

I so enjoyed our evening wander along the seashore in Bournemouth when I visited you in 2012. You told me about your reactions to Seth’s analysis of your work in The Comics Journal. And how he seemed to have understood what you were doing and saying, perhaps more fully than you did yourself?

Yes, Seth looks at me and knows what I’m doing. Seth’s article in the Comics Journal, I thought, drew a line under what I’d been doing with Mauretania Comics. He’d found all the themes and neatened-off everything into a plausible-sounding package, and I thought, “That’s it. That’s what I did. I didn’t know, but I can rest now,” which was lovely for a bit. Seth was dead right in his Comics Journal essay about Monitor having come from somewhere else. It’s been great having had Seth’s support over the years. It’s great having had everyone’s support over the years. My family, Mrs Wood, John Parke, Paul Harvey, Robert Blamire, you and Peter, Ed Pinsent, Mark Baines, Cheryl Blundy, and everyone who’s helped.

—Misc. The New York Times writes about the faded mural at The Overlook.

This crumbling, beer-splotched wall in the back of a sports bar on East 44th Street is one of New York’s more neglected cultural treasures. Created in the 1970s, it is a veritable Sistine Chapel of American comic-strip art: the 30-some drawings across its face were left by a who’s who of cartooning legends, including a Spider-Man by Gil Kane, a Beetle Bailey by Mort Walker, a Dondi by Irwin Hasen, a Steve Canyon by Milton Caniff, a Hagar the Horrible by Dik Browne, and a Dagwood Bumstead by Paul Fung Jr. There’s also a self-portrait by Al Jaffee, a doodle by Bil Keane, and a Mad magazine-style gag by Sergio Aragonés. Old regulars are familiar with the wall’s past, and comic book scholars make occasional pilgrimages to the bar, but the Overlook’s cartoon mural remains largely unknown and untended. 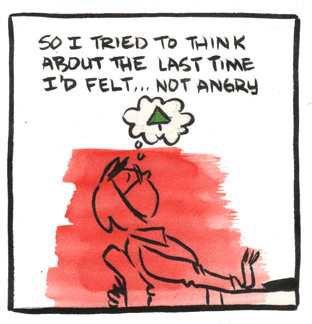 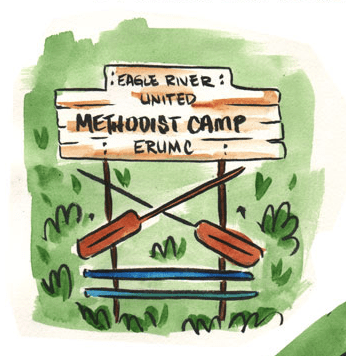