From time to time, probably more often than he wishes, I pester Dan Nadel to identify potential references to American comics in Japanese manga. He's 50/50. 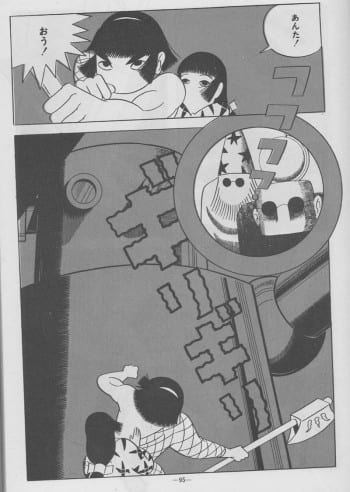 This time he has passed me along to the TCJ blog. The image in question is from a short work titled "Yamanba Lullaby" by Garo artist Hayashi Seiichi from 1968. I know that he was looking at Superman and Batman comics, since around 1966. The idea of a giant robot, driven by a mad king, dispatched to abduct a young maiden, came, says Hayashi, from Paul Grimault's animated feature Le Roi et l'oiseau, the first version of which was released in the United States in 1952 under the name of The Curious Adventures of Mr. Wonderbird.  The robot in that movie, however, does not look like this one. This one looks more to me like the toy robots of the early and mid 50s. Those of manga in the 50s, like Gigantor, tend to have "muscleman" torsos: wide shoulders, tapering toward the hips. I wonder if it might not come from American comics? The circular panel at right also suggests American comics. That bald square-head mad doctor with the sunglasses also, maybe? Any thoughts? Again, the manga is from 1968.

Since I have your attention. I also want to ask you about two images from Tatsumi Yoshihiro's Black Blizzard (1956). Beyond what I published in TCJ #301 and online here two years ago, I have enough material for a thoroughgoing rewriting of the history of that manga. But I have been holding off writing a final version until I can identify the sources for these images, which, if my hunch is correct, put American comics at the birth of Tatsumi's gekiga.

From A Drifting Life, one learns that Tatsumi was reading American action comics and also 3D comics in these years. I have seen in a work of his from 1956 references explicitly to Batman and 3D movies. The righthand image, with the giant foot, seems to me that it could have been inspired generally by movies like Lady in the Lake (1947) or House of Wax (1953). The latter I know he knew from a work from 1957. But perhaps the foot comes from American 3D comics? The left image, meanwhile, with its jokey English language "Crack! Ohh" definitely comes from American comics. In the D&Q edition, because everything is translated, you would not have noticed that this one panel is in English in the original. Knuckle sandwiches, in Tatsumi's mind apparently, are American comics. I doubt Tatsumi could have come up with the sound effect himself. Whenever I look through American comics from the late 40s and 50s, I keep my eye open for a punch with a "Crack! Ohh." But as you can imagine, this is a needle in a haystack.

Any ideas where one might look based on the style of the punch and the rendering of the sound effect? 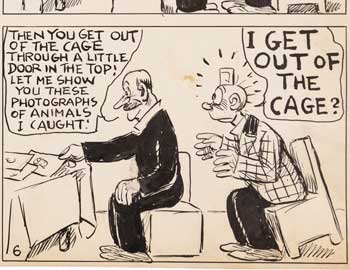 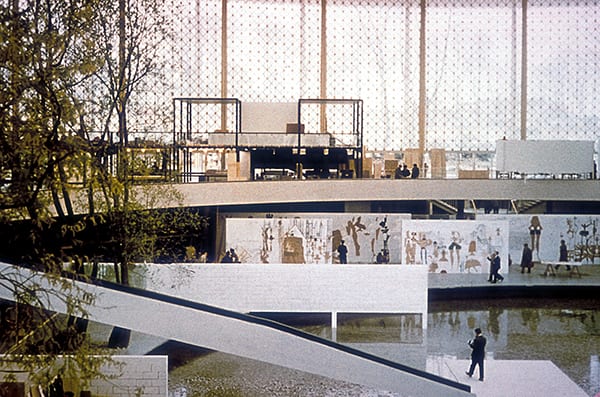