Today at The Comics Journal, we've got another go round with Josh Kramer--today, he's speaking to James Sturm about all the various life experiences that ended up getting poured into the creation funnel on the way towards the creation of Off Season, his most recent graphic novel with Drawn & Quarterly.

This is kind of a different mode for you to work in. So many of your books are set in the past, in America or Eastern Europe. How did it feel to be working in a contemporary setting?

I liked it. I liked that it reengaged me to my surroundings. That car that Mark drove, I’ve sold it since then, but it was my car at the time. That house that he’s doing construction on is basically my house. The snowstorm, the streets, those are all Upper Valley. The tire place, etc. I really enjoyed that.

I remember, within a week or two of the election, talking to the cartoonist Summer Pierre and both of us expressing a visceral need to just draw things in front of us. That was that big question after the election: why weren’t we paying attention? And it was my big question, after being conned. This need to just kinda ground yourself, as opposed to all the online stuff, and even doing historial stuff, you are pulling resources offline and looking in archives.

For another taste of contemporary life, we've got Jesse Reklaw with the second day of his Cartoonist Diary. Today, he's using one artform to describe another!

My apologies for today's late and abrupt blog entry. It's my daughter's sixth birthday, and we have brownie sundaes to eat. 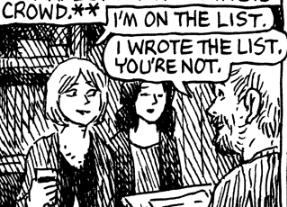 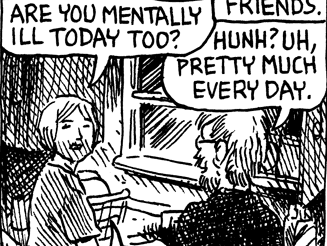