Happy Friday. Today we have Jeff Trexler weighing in on the Kirby settlement.

On Veterans Day Marvel celebrated Jack Kirby’s military service with photos and recollections from Kirby’s son Neal. Does this collaboration prove that the Kirby heirs triumphed in their fight for justice, or did their settlement betray creator’s rights?

A little over a month ago, the Supreme Court was on the verge of giving new life - or dealing the final blow - to the attempt by Jack Kirby’s son Neal and daughters Barbara, Lisa and Susan to claim the copyright such iconic characters as Spider-Man, the Fantastic Four, X-Men and the Avengers. What the Court would have decided we may never know for sure, since the company and the family settled just days before the scheduled date for the Court to decide whether to take the case.

TCJ-diary contributor Kayla E. has launched a Kickstarter for the anthology she co-edits, Nat Brut, and she's such a good thinker and the new issue certainly sounds promising enough for me to briefly set aside my aversion to Kickstarter.

Hey, I was on NPR on Wednesday talking (with Norman Hathaway) about my new book, Dorothy and Otis: Designing the American Dream.

Book industry: Ursula K. Le Guin is awesome (I mean, I knew that already, but this is extra).

Should the Kirby Family Have Settled? 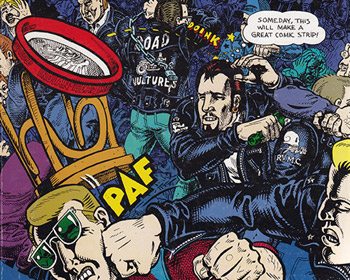