Today on the site, we have published the commencement speech Seth gave to this year's CCS graduating class, with an introduction by James Sturm.

To begin, I’d like to tell you that you have made the right decision in choosing to be cartoonists. This is very likely a sentence you will never hear again in your life. Don’t let that deter you.

Cartooning is a beautiful art form and you are among the first few generations of artists allowed to explore it with the freedom and pleasure that other artists have always been granted with their mediums. Take that to heart but take advantage of it, as well. It is a remarkable opportunity.

While it is true the legacy of our medium is scant, this also means you do not have the weight of centuries of tradition hanging over your head. Comics have only been considered worthy of serious attention for a decade or two. That’s nothing in the grand scheme of things. The field ahead has barely been tilled. Open ground. Ground that is still fresh, still brimming with possibilities. Still chances to stake your claim.

To be honest, I am quite envious of you. This school has given you an experience I could never have dreamed of when I started out. Back then, in the year 1980, it would never have occurred to me, after high school, to look for a college that focused on teaching comics. A ridiculous idea. Why would there be such a thing? I knew that comic books were considered pure junk. Almost the very bottom of the cultural trash heap. Perhaps pornography was considered lower. Perhaps.

Chicago-based artist Jessica Campbell's first effort with Koyama Press, Hot or Not: 20th Century Male Artists was a wonderfully funny, pointed satire in which the author presented herself as a museum docent, assessing not the artistic merit of celebrated male artists such as Gustav Klimt, Henry Moore, and Mark Rothko, but their sexual attractiveness, i.e., their "boneability." It was wicked fun, and Campbell never let the politics of her role-reversal override the silly humor of it all, proving herself a humorist to be reckoned with.

With her followup, XTC69, Campbell explores the same satirical territory, holding a mirror up to male chauvinism and misogyny and reflecting it back with merciless aim, this time through a science fiction parody seemingly inspired by the 1967 drive-in trash classic Mars Needs Women, in which a group of male Martians visit Earth to find female mates with whom to repopulate their planet. Campbell quickly establishes her everything's-opposite scenario, making her aliens a trio of females from the planet L8DZ N123 (read that carefully—get it?) roaming the galaxies in their titular ship in search of males. The L8DZ are led by Commander Jessica Campbell and the planet they have landed on is Earth—only it is 700 years in the future and no humans remain… except for one young woman also named (gasp!) Jessica Campbell.

I feel like I became a mental health activist and advocate just by putting out my personal story. It made me feel really purposeful. It wasn’t just about me and exposing my own vulnerability and strength and story, but that there was more meaning to it than just my personal story. Much more than I had realized. I wanted to do more. The focus in Marbles, and the focus in most personal stories about mental health or bipolar disorder certainly, are about the struggle to get stable. That’s what my story was and that’s the narrative story arc. That makes sense, but being healthy with a chronic disorder means that you have your whole life stretching in front of you. It’s a long term prospect and that’s not nearly as interesting a narrative. I wanted to come up with a way that was dynamic and helpful and dealt with that part of it. That’s why Rock Steady is more of a companion book to Marbles, but you can also call it a sequel in that it’s about act two, three, and four, and however long life is.

When I think of the Mignola images I like that predate the Hellboy material, I most often think of a page in the DC event Cosmic Odyssey, where Batman is hiding just out of sight of the larger, Kirby designed villain above him: This sort of framing is nowhere in Hellboy.

Reading Hellboy, it turns out it still works. The aspect of Mignola’s visual language that seems most uniquely his is the insertion into a page of a statue or something that is primarily about atmosphere than a progression of sequential images. Despite his pages being redolent with big chunks of black and negative space, it was easy for me to see the similarities with Rob Liefeld and other Image founders. But reading this collection, those sort of insert shots that seem atmospheric or decorative when looking at the page as a whole comes across differently when you’re actually reading it: Like you’re noticing something else in the room you didn’t see before, but that now is emerging from the shadow because it’s directly in front of you. I don’t think of Hellboy as actually “scary,” despite its designation in the horror genre, but the stripped-back visual language works to convey that feeling as much as any of the story’s tropes. 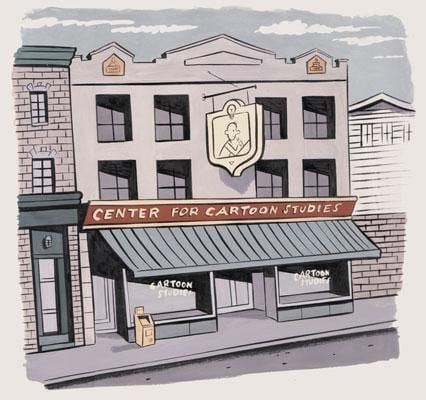 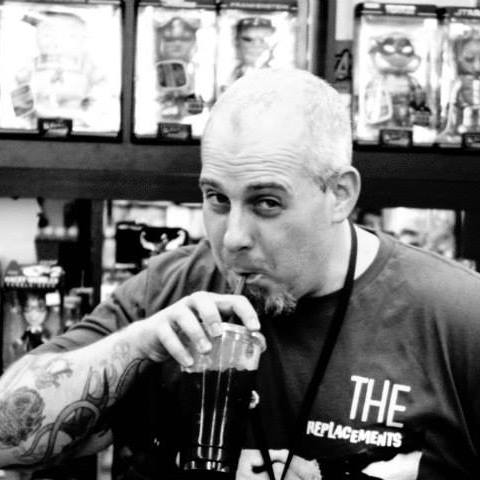