Hamlin kept up a merry round of madcap adventures in Moo for the next five years before beginning to feel constrained by the narrow range of story possibilities imposed upon him by his chosen locale. Then Dorothy again supplied a vital prompt: remembering a story her husband had written in high school, she suggested introducing a time machine. If Alley Oop and Ooola could travel through history, stopping here and there wherever a good story seemed likely, the story possibilities would be limitless.

Hamlin’s interest in prehistory had by this time broadened considerably into ancient history (as it would eventually into all history), and time travel enabled him to pursue this interest in the strip. He went to the syndicate editors in Cleveland immediately and, after “the best part of a week” of persuading and pleading, got permission to change the strip, a violent wrench of a change, something no other strip at the time had managed.

On April 6, 1939, Oop and Ooola suddenly fade from our sight in the Moovian jungle; and two days later, they materialize in the laboratory of a twentieth century scientist, Elbert Wonmug (a punning last name celebrating science’s most famous theorist, “en stein” being German for “one mug”). Wonmug has invented a Time Machine, and, seeing the rugged resourcefulness of the prehistoric pair, he subsequently sends Alley and Ooola on “fact-finding” missions through the ages: they become time travelers and have adventures in every famous epoch in history.

And Jeet Heer reviews the new IDW collection of Otto Soglow comics. I'm kind of surprised I haven't heard more about this book. Soglow is hilarious. Here's an excerpt from Jeet's review:

One of the great strengths of Cartoon Monarch is that it gives us a very generous sample of Soglow’s work from many facets of his career so that we can see that the clear line style was a hard won victory for the cartoonist. Rather surprisingly, Soglow started off as a student of such Ash Can School masters as Robert Henri, George Luks, and John French Sloan. Like them, he specialized in charcoal-dark representations of urban squalor (some of which appeared in radical publications like The New Masses).

Soglow’s move to the clear line wasn’t a complete break from his earlier art since he continued to do anecdotal art about urban life, but his art started to become more line-focused and less shadowy as he became a fixture in The New Yorker, where the Little King first appeared in 1930. I’d speculate that Rea Irwin was an influence. Contractual wrangling with the New Yorker seems to have prevented Soglow from immediately moving the monarch to newspapers when the Hearst Syndicate hired him in 1933. As a stop-gap measure, Soglow created The Ambassador, who was the Little King in everything except title and facial features (the Ambassador had a bulbous nose and a walrus moustache).

—Your regular dose of Alison Bechdel profiles/interviews can be taken at both The Guardian and Comic Book Resources.

—By all accounts, the star-studded, Hilary Chute-organized "Comics: Philosophy & Practice" conference held this weekend at the University of Chicago was a huge success. Many of you hopefully found some time this weekend to watch the live streaming video of various panels, but if not, know that many of them will soon be archived at this page at the Critical Inquiry site.

—Creators' rights issues make their way into the Washington Post by way of Michael Cavna's interview with Roger Langridge about his decision to no longer work for Marvel or DC.

—Joe Sacco has a short story, "Kushinagar", in the New York Review of Books(!). (Am I right in thinking this is the first comic strip ever published in that magazine?)

—Talking to The Guardian, Dan DiDio tries to justify DC's decision to create Watchmen sequels, and responds to Alan Moore's stated opinions on the matter: "Honestly I can understand why he [Moore] might feel the way he does because this is a personal project to him. He has such a long and illustrious career and he's been able to stand behind the body of work he's created. But quite honestly the idea of something shameless is a little silly, primarily because I let the material speak for itself and the quality of the material speak for itself."

—Ron Goulart takes a look at Jack Cole's Betsy and Me.

—And finally, assuming those of you who are interested didn't already see this at one of the many, many places that linked to it over the weekend, Neil Gaiman gave the commencement address at the University of the Arts: 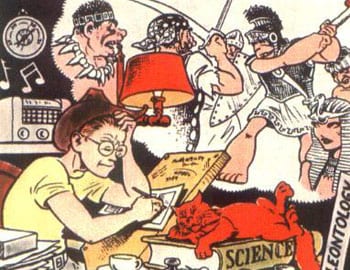 A Stretch in the Bone Age: The Life and Cartooning Genius of V.T. Hamlin 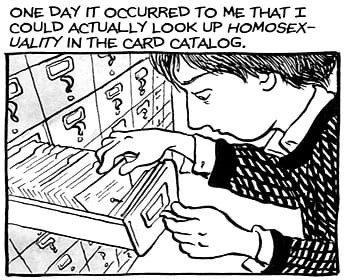