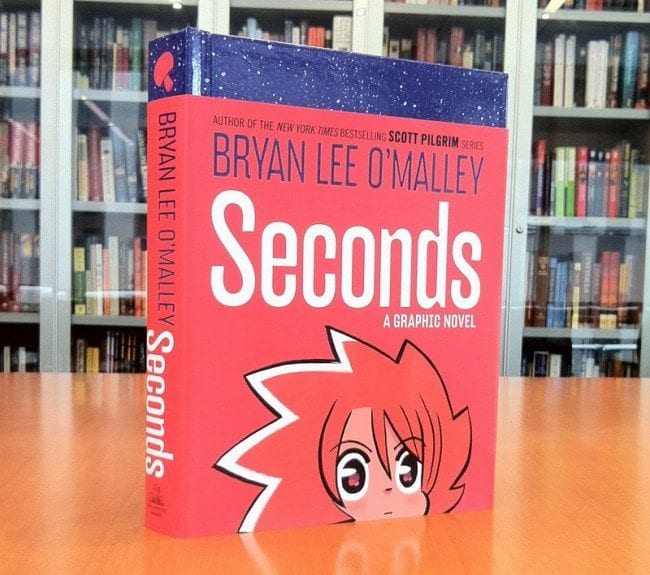 Seconds is Bryan Lee O'Malley's first book since finishing his Scott Pilgrim series. Like Scott Pilgrim, it marries real world troubles with fun, supernatural elements. Scott Pilgrim dramatized twenty-something dating using the language of videogames. Seconds takes a chef opening a new restaurant and places her inside of a world of house spirits and magic mushrooms. I loved it. His cartooning is more mature in this book, and, for me, more charming. I got a copy of it in the mail on a day when I was sick. I read it that day, taking naps between chapters, and I think Seconds' magic helped heal me. I had to ask him a few quick questions about it.

Thanks for reading, and thanks, O'Malley, for participating.

Shaw: A character will appear in one of your stories and something about the way that they're drawn, or highlighted, or dressed, makes the reader immediately like them. Hazel's grandmother appears for only a couple pages in Seconds, but I liked her straightaway. Do you have sketches of character designs that are just like "I want to hang out with this person"? And then you develop the story based on the character design? Or does the story come first, then the character, and then the design?

O'Malley: I don't really have a set method for character design or development. With Seconds, the idea of the restaurant came first— the restaurant and the chef and the house spirit. Then I needed a character who could be knowledgeable about the house spirit. So those three, Katie, Hazel and Lis, were always at the core. I changed their names a bunch of times. I didn't even do a drawing of Katie or Hazel until maybe two years after I wrote down the first story ideas. Katie's look was first inspired by a character in a Tezuka book - Phoenix: Nostalgia. Hazel's inspiration is just a "fashion blogger type". I wanted to have a short character and a tall character, because relative height is something I had trouble conveying, or remembering to convey, in Scott Pilgrim. Lis went through a bunch of versions. I just always knew I wanted her to be kind of bird-like and perch on stuff. Her hair ended up looking like a chicken's butt or something.

How did you develop Katie?

I worked in a restaurant for a while and I never knew the "boss" there but I sensed she was an intimidating woman. Everyone in the restaurant really respected her but kept their distance. So I guess that was the initial inspiration for Katie. I'm a quiet and internal person and I wanted to keep exploring loud, external people. Katie is like an evolution of Scott Pilgrim. She's smart, but also makes really stupid and selfish decisions and is unrepentant about that. She's obviously full of doubt but she plows forward, whereas in the same situation I would be paralyzed with indecision. When I started writing the book I just folded all that stuff into Katie and tried to make her as entertaining as I could. 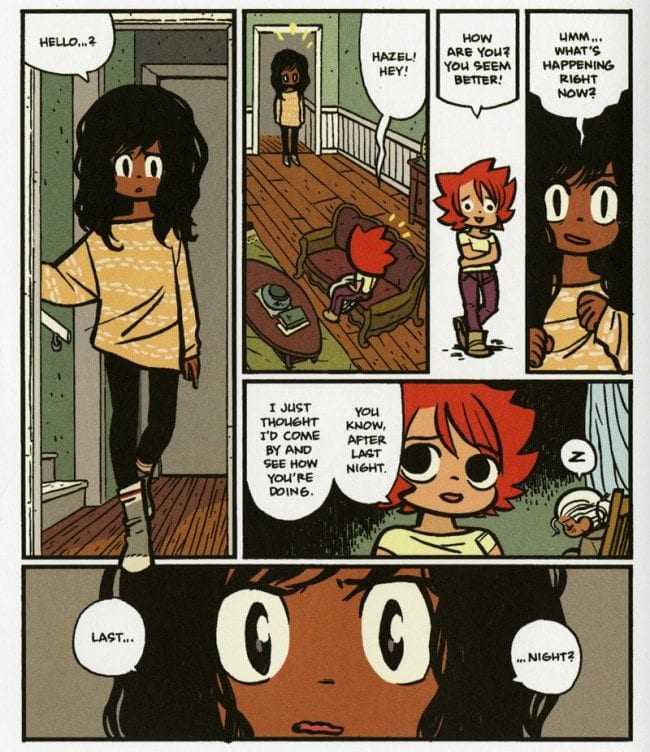 Why do you think this story about a woman and her restaurant asked for the house spirit element?

I remember hanging around with some coworkers and saying I was going to do a comic about a Russian house spirit in a restaurant. I always liked the idea of the Domovoi, this guardian spirit that hangs around your house. The restaurant was old and mysterious and had probably been used for a lot of different purposes over the years. I got to thinking about the old-world concept of a house spirit, but one who's just sitting forgotten in an old house as the world changes and evolves.

And then, how did the house spirit turn into the "second chance" magic mushrooms?

My mom used to read me this story as a kid, called "The Second Chance Ticket", and Seconds kinda spun out of my lingering memories of that story. It was about a kid who dreams about an elf or a sprite of some kind living in his attic that gives him a ticket that can reverse a mistake. He accidentally lets his dog run away and then he reverses it and that's basically the whole story. From my adult perspective it's kinda pointless, just weird and atmospheric, but it always stuck with me. I crossed it with the Russian Domovoi concept and stuck it in a restaurant and made it all about the stresses of adult life.

The mushrooms came about because I wanted a visual element that was also a food element, and then I liked how it became kind of weird and alarming because mushrooms are also frequently used as a psychotropic drug. 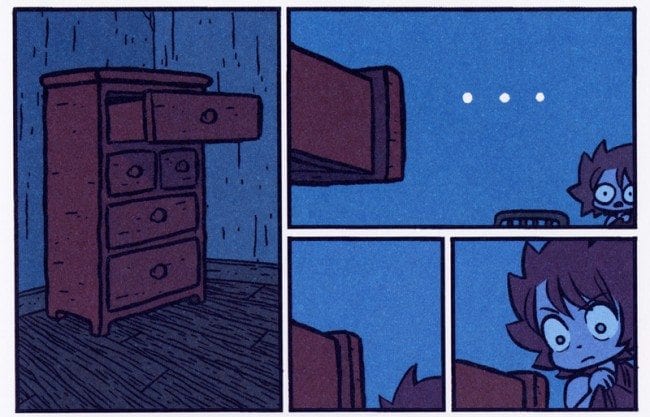 You're a quiet guy, and drawing comics is very solitary. Did working on the Scott Pilgrim movie change that? Did you have to learn some social skills? If so, what kind of skills? Is having background/lettering assistants partly a social thing as well?

I wouldn't say the movie changed my ability to socialize... I still see a lot of the people from the movie regularly, and we're certainly all friends, but I still feel like I'm just as awkward around them as I was five years ago.

On the other hand, my assistant Jason Fischer stayed with me in LA for almost a month during the later days of inking, and that was actually great. We got along really well and some great ideas for the book, visual and thematic, came out of us chatting while we inked. I don't think it would have been the same book or nearly as good without that process. That was pretty surprising and new for me, and I hope I can work like that again in the future.

What's something that changed about the book from working with Jason Fischer?

In the last couple weeks of work I redid the ending, and that new ending definitely came out of our talks while inking. One night I was lying in bed after like sixteen hours of inking, and this whole new sequence came into my head fully formed. That sort of thing always happens to me late in the game, but something about working side by side with a like-minded artist just made the whole process feel more fruitful I guess.

I don't know what I think of my work, and I'm sure Seth would bristle at any comparison (ha ha) but sure, that's a cute notion. My trajectory as a reader in the ’90s took me from superheroes to manga to American indies like Bone, and then belatedly discovering Seth and Chester [Brown] was the last piece of the puzzle for me. They brought the world of comics basically to my doorstep. I don't think the notion of a story like Scott Pilgrim would have crossed my mind before I read It's a Good Life if you Don't Weaken, just based on setting alone. It was a real "duh" moment for me. 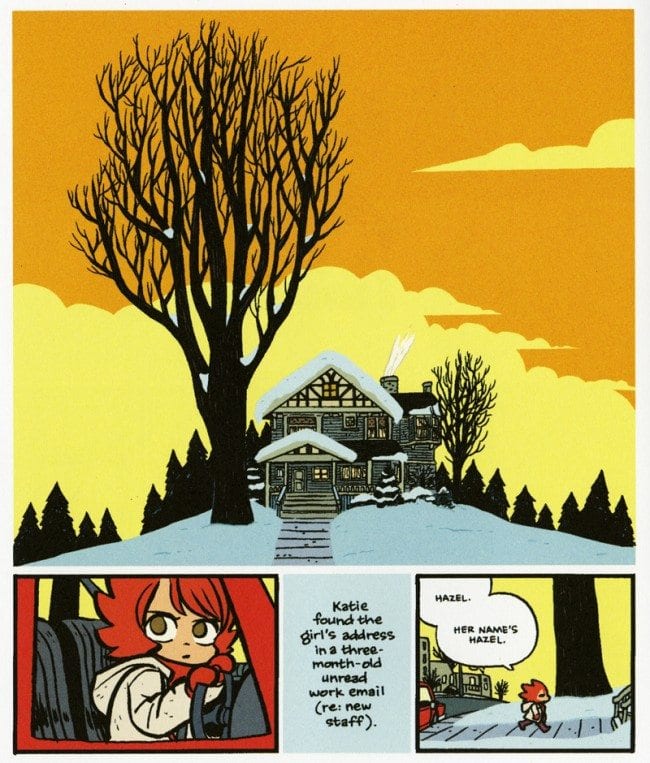 If you showed the Bryan Lee O'Malley of 2004 who just drew Lost At Sea a copy of Seconds, what would he think? What would surprise him about the work he'd do ten years later?

Since I had Scott Pilgrim going, and the idea for Seconds was already in my head, I don't think 2004 me would be too surprised by 2014 me's work. I think the story of my work in the past ten years makes sense and is exactly what I set out to do. Most of those influences were already in place, except maybe Tezuka, who I didn't get heavily into until around 2007. But overall I'm just really happy with Seconds and pleased with the state of my drawing and writing and the whole thing. Maybe that's simple-minded, but it's the first time I've felt that way about my work.

What did you learn from Tezuka?

I don't know if I learned anything from Tezuka! I don't know if I know anything at all. I just like his drawings. Everything is round and squishy and feels alive. He conveys motion so well. I can't even approach that, but he's like a mountain peak that I can keep looking up at to remind myself how far I have to go.

I keep telling people I want to do some short comics. I have a bunch of ideas that have accumulated over the years that could maybe be fleshed out into 16 pages or 30 pages or whatever. It seems like a good palate cleanser after a huge graphic novel. Now that I've told people I want to do them, I'm kind of panicking because what if I start doing them and I'm awful at short stories? So I don't know. We'll see. 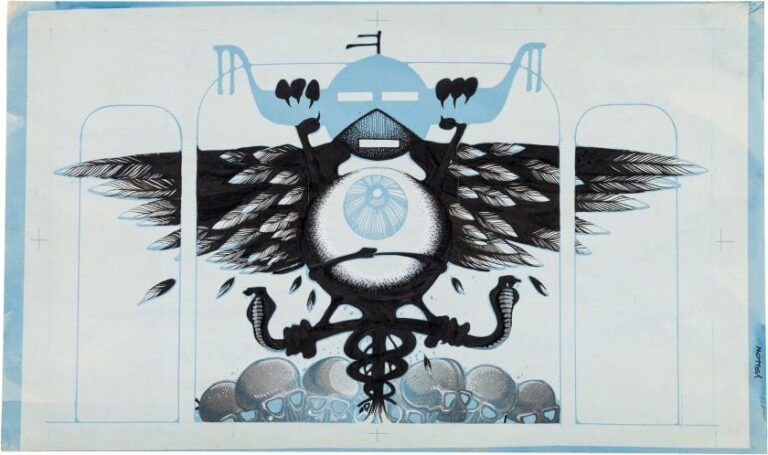 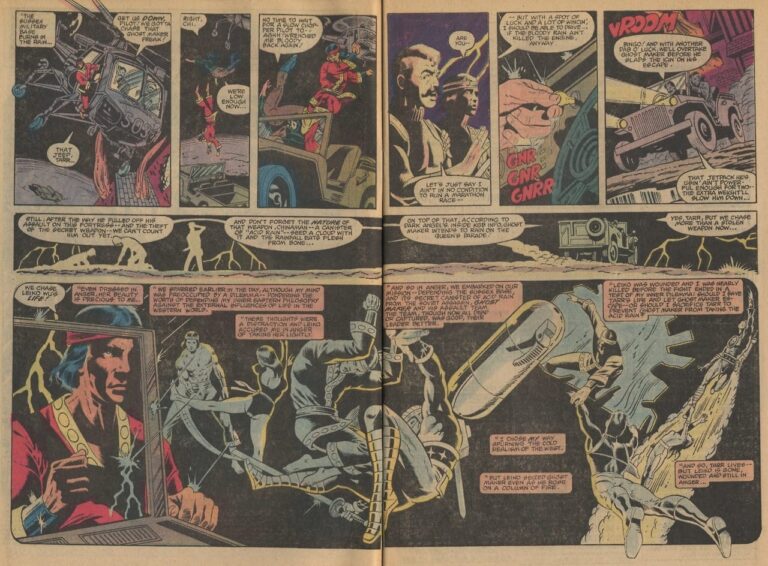