The Charlie Hebdo tragedy has sparked a vigorous debate over freedom of speech and responsible satire, an argument that goes back to the very first American case involving a satirical cartoon.

I’ll get back to my series on the Jack Kirby lawsuit in my next article, but the Charlie Hebdo attack and its aftermath is such a profound cultural moment for the global comics community that to proceed without acknowledging it seemed almost obscene. What’s more, it is not without its own legal implications, most notably in the realm of free speech.

As all of you are no doubt aware, Charlie Hebdo is a satirical magazine far more resonant with the anarchic satire of the 1960s underground and the comics in the old National Lampoon than what many would deem acceptable today. For every person declaring “Je suis Charlie” there are as many adding an emphatic “ne pas,” with some even raising the question of whether free speech brings with it a responsibility for satire to stay within socially accepted boundaries of mutual respect.

It’s not my aim in this piece to argue for either side of this debate. Instead, I simply want to take a moment to reflect a little on its history and how it relates to the medium that unites everyone who comes to this site.

Free speech is a topic that isn’t exactly new to the comics world. The subject is perhaps most familiar from discussions of obscenity and the 1950s comics scare, with the Comic Book Legal Defense Fund being the best known institutional expression of the ideal. However, if we go back further in our history, we can find an equally robust debate over comics as a satirical form. The early years of the medium in the U.S. brought forth a number of cases in which people argued that cartoons went too far, and their creators or publishers did not always win.

The fundamental parameters of the debate were established in the very first reported court opinion to use the word “cartoon,” the Supreme Court of Louisiana’s ruling in State ex re. Liversey et al. v. Judge of Civil District Court, 34 La.Ann. 741 (1882). The newspaper that gave rise to this landmark case a New Orleans satirical broadsheet called The Mascot.

A local writer and photographer named Sally Asher has recently provided some fascinating historical background about The Mascot, which as it turns out has other tangential connections to l’affaire Charlie Hebdo. For one thing, like its French counterpart The Mascot was a recurring target for violence by those it offended, such that at one point a newspaper artist was attacked because a mob mistakenly suspected that he drew cartoons for The Mascot. In what is perhaps the most outrageous Charlie Hebdo analogue, a few years after the lawsuit in question two local officials went to the paper’s office and attempted to murder both its publisher and its engraver. In the ensuing scuffle, one of the officials was himself shot to death in self-defense. The intended Mascot victims were acquitted in their murder trial, but so too was the surviving state official ostensibly compelled to kill by their offensive publication. 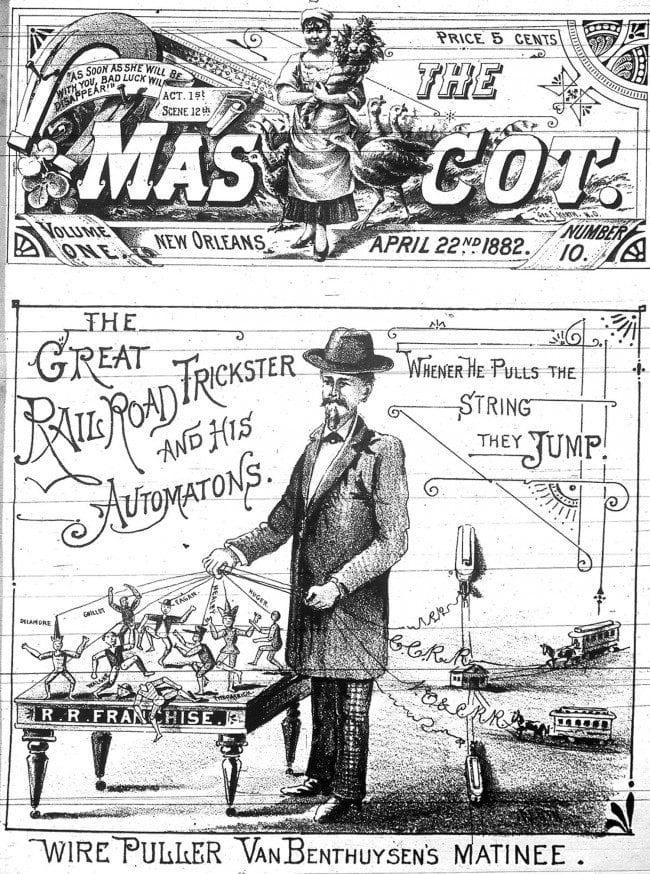 At the time, the paper’s title is itself an outre reference to material that skirted the boundaries of American decency. The Mascot was a reference to the satirical French opera, La Mascotte, a word that at the time referred to an enchanted talisman or, more slyly, a licentious witch. The opera is a ribald take on gender, class, and hoi polloi, involving an entitled prince’s attempt to have his way a young virgin seen as a living good luck charm. Not safe for playing at work if your boss happens to understand French, the opera abounds in bawdy double entendres.

As for the case itself, the key question was whether it was legal for a lower court to have issued an injunction ordering the paper not to publish offensive cartoons. This became an issue just a couple weeks following the paper’s launch, when it published a cartoon depicting local railroad baron Watson van Benthuysen as a puppeteer pulling the strings of government officials. Lacking any sense of irony, Van Benthuysen got a judge to prohibit The Mascot from publishing any more cartoons or caricatures at his expense, to which the paper responded by — big surprise — doubling down on its attacks. The judge held the publishers in contempt, and the Louisiana Supreme Court’s ruling is its response to their appeal.

Although the publishers won and both the injunction and the contempt judgment were nullified, the judges were not united in their view of free speech. The majority held that the publication of allegedly “wicked, wanton and malicious” cartoons was nonetheless protected by the First Amendment and Louisiana’s own Bill of Rights. As the court noted, liberty of the press was clearly a fundamental legal principle, since “even so elementary a work as a law dictionary fully defines the phrase as follows: ‘This express expression imports freedom from any censorship over what shall be published.” Against this ringing endorsement of a free press even when publishing such a lowly form of expression as a scurrilous cartoon, the Chief Justice of the Louisiana Supreme Court filed a robust dissent. This dissent cited a different definition of liberty of the press, confining it to “the right to print and publish the truth from good motives and for justifiable ends.”

Whether conscience or the courts should keep certain images out of public view remains a vital question. In fact, in an aside that reflects the long tradition of judges parrying the cavils of a dissent, even the Liversey majority felt obliged to toss in a line about how we have libel laws because “nothing would threaten the permanence of the liberty of the press so gravely as its degeneration into unbridled licentiousness.” And this is far from just an American constitutional scuffle — the debate about cartoons that go too far by crossing invisible lines goes back at least through rascally Reformers’ use of the newfangled printing press to print woodcuts of the devil shitting monks all the way to Plato’s cave and ancient prohibitions of idolatry.

So long as our intuitive desires for freedom and responsibility remain in tension this debate will never end. But if there’s a glimmer of hope coming out of the Charlie Hebdo massacre it’s that most people agree on one thing: whatever penalties the law may impose for crossing the line of civilized expression, they certainly should not include death.

Concluding historical postcript: The Mascot and its French namesake have another tangential connection to the media that unite us. Over time, the word mascotte evolved away from sexually enticing good luck virgin to the more family-friendly meaning now associated with mascot in English. One of the more innovative transitional moments along the way is the 1933 French stop-motion classic Fetiche Mascotte, in which the eponymous hero, a stuffed toy puppy, sets out on a quest to find an orange for an impoverished girl. Those of you who grew up watching Art Clokey’s Davey and Goliath might notice the secret origin of some of Goliath’s signature gestures. 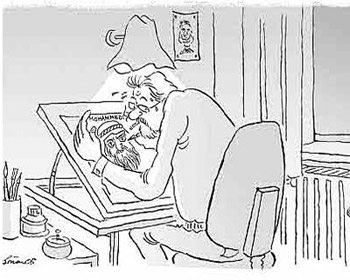 Cartoons of Mass Destruction: The Whole Story Behind the Danish 12 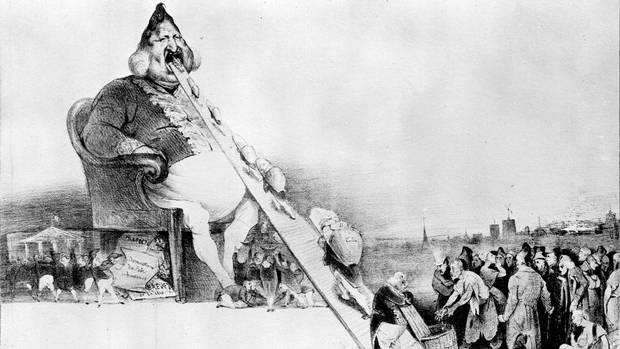