Today on the site, we present the final installment of R.C. Harvey's epic chronicle of the legendary feud between Al Capp and Ham Fisher. Now that the story's been told, Harvey reflects on what it was all ultimately about.

No one decided to deny Ham Fisher a place in the history of cartooning. The profession’s odd silence on the subject is not the result of deliberation and design. It is instead an accident, an unforeseen constellation of circumstances, a happenstance of personality and event, which, invested with pride and ego and jealousy and vaulting aspiration, turned ugly. The tragic end of the Fisher-Capp feud could well promote vague feelings of shame and guilt among those who stood by, feelings that were suppressed by keeping silent. Fisher’s suicide was a blot on the escutcheon of the National Cartoonists Society. And it is therefore understandable if many cartoonists fell into the habit of not mentioning it. And by avoiding the subject of Fisher’s death, the subject of his attainments is likewise shunted out of view.

While I’m delving into unconscious motivations, let me toy with one more fanciful speculation. This time, on the matter of Fisher’s motives.

Fisher’s behavior strikes me as more than a little extreme. Capp’s appropriation of hillbilly characters for a comic strip doesn’t seem to me sufficient provocation for Fisher’s subsequent actions — the tirades, the smear campaign. Psychologically speaking, when someone’s behavior is excessive for the provocation, it suggests that the presumed motivation is not, in fact, the real reason for the reaction we see. And when this happens, it’s because the real reason must not be consciously acknowledged.

—News. The finalists for the L.A. Times Book Prize have been announced, including five in the graphic novel category.

—Reviews & Commentary. The New Yorker has published an essay by Jennifer Finney Boylan, about how Peanuts taught her about queer identity and self-acceptance.

It was in reading “Peanuts,” lying on the floor beneath the piano in our suburban home, that I first grasped the terrible truth: my parents resided in a cartoon universe. It was Charlie Brown and his friends—children who lived in a world defined by unrequited love—who resided in the real one. I could imagine Charlie asking, with his usual anguish, “Isn’t there anyone who can tell me what love is all about?”

As it turns out, there was one person who could: Pigpen. Of all the characters in “Peanuts,” Pigpen seems most at peace with the life he has been given. Sure, he’s immersed in filth—he can “raise a cloud of dust in a snowstorm,” as Charlie Brown puts it—and Patty and Violet seek constantly to humiliate him. But Pigpen will have none of it. “Aren’t you ashamed?” Violet says to him, after making him look in the mirror. “On the contrary,” he replies. “I didn’t think I looked this good.” In a strip from September, 1954, Patty marches along with a bucket, determined to “personally give Pigpen a good scrubbing.” But when she finds him—sitting, as usual, in a sandbox—he looks clean and shiny. As she departs (“I guess there’s some hope for him, after all”) you see that only half of Pigpen is clean. The side facing away from Patty is still covered with grime.

Charles Schulz was said to have grown tired of the character in later years, in part because it was hard to write material for him outside of the one basic joke. But it’s not hard to understand his enduring appeal. He’s the closest thing the strip has to the spirit of total Zen. It would be nice, I thought, lying there beneath the piano, to live one’s life like this. It gave me “Peanuts” envy. I wondered: Did Pigpen never feel the yearning to be clean? Or had he accepted that purity was not in the cards? Was the secret of his grace that he lived in a world without desire?

—Interviews & Profiles. Vulture has a profile of Eli Valley.

There was a time, not so long ago, when Valley was an unknown and profoundly uncontroversial figure who barely engaged in the debates that he so energetically dives into today. Sitting in his cramped, comic-book-brimmed studio apartment in downtown Manhattan, I ask him about a curious professional irony that demonstrates just how much his life has changed in recent years. In 1999, Valley was living in Prague, giving tours of Jewish historical sites in Eastern Europe, and he published his first book: a hefty prose tome entitled The Great Jewish Cities of Central and Eastern Europe: A Travel Guide and Resource Book to Prague, Warsaw, Cracow, and Budapest. It proudly wore a blurb from none other than Nobel–winning writer, Holocaust survivor, and Israel advocate Elie Wiesel: “This beautiful and melancholy book is more than a guide to great Jewish cities: it is a book of tales.”

But flash forward to August 2014 and you’ll find Valley publishing a comic called “Wiesel, Weaponized” in +972 Magazine, a left-leaning outlet that covers the Israeli–Palestinian conflict. At the time, Wiesel was emphatically advocating for the Israeli side in that summer’s war in the Palestinian territory known as the Gaza Strip. In the comic, sinister Israeli scientists affix Wiesel’s head and brain to the front of a bomb-dropping drone vehicle and use it to annihilate Arabs in Gaza while spouting platitudes like, “This is a battle between those who celebrate life and those who champion death!” At the end, the Wiesel drone flies off into the sunset, muttering fragments of pro-Israeli talking points: “Conscience of humanity … Civilization versus barbarism … Arabs … Death cult … Fires of Moloch … Israel chooses life …”

The most recent guest on Inkstuds is Karl Stevens. 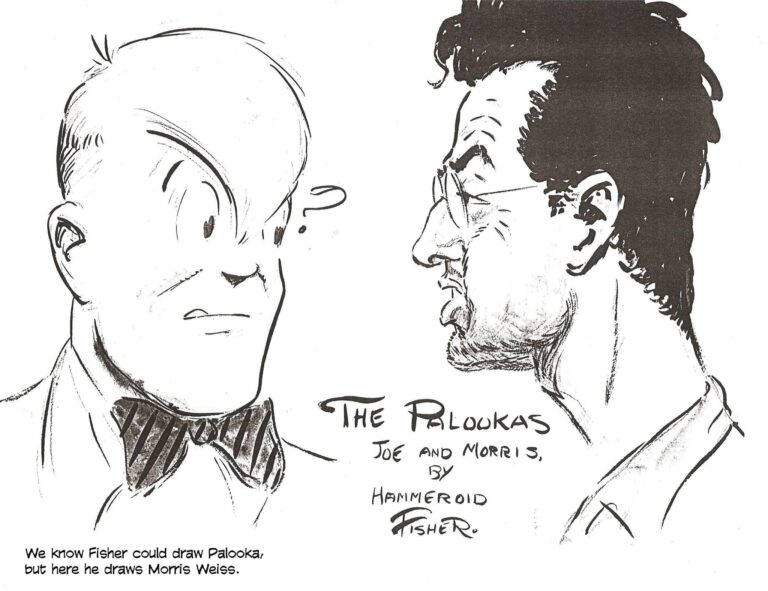 Hubris and Chutzpah: How Li’l Abner Kayo’d Joe Palooka and Both Their Creators Came to Grief (Part 9)

Dammit Jim, I’m a Comics Retailer, Not a Doctor!