I was at CCS earlier this month, and I plan on writing about it—but first I have to get this sidebar rant out of the way. When I was at CCS, some of the students were talking about Chester Brown. They knew Paying for It, I Never Liked You, and Louis Riel but most had not read Ed the Happy Clown. I wasn’t surprised because that story was out of print for so long. But what did surprise me was their general disdain for the way Chester portrays himself and maybe for Chester too. It made me wonder if their attitude would have been different if they had read Ed the Happy Clown first, like many of us did, through the issues of Yummy Fur.

Either way, that interaction and this excerpt (from Brian Evenson's forthcoming book) made me revisit Yummy Fur. I wrote something on my favorite issues of YF for ComicsComics — so I’m going to cannibalize it here and add to it. I want to look at the evolution of Chester Brown's grid layouts in Yummy Fur issues 19, 20, and 21. 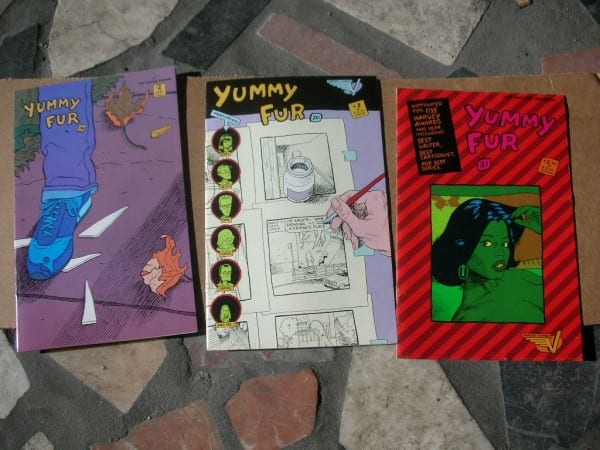 I'm fascinated by the way Chester composes. He’s said that he doesn’t think about the overall page or spread. Issue 20 of Yummy Fur shows us how he does it (see below). He is making one square panel at a time and taping it down loosely in a grid. So he is thinking about the overall page or spread on some level. Even if he moves panels around they are still “in tune” with each other. It’s all intuitive and second nature, I think, because he sees harmonies in the grid. It’s like scales. 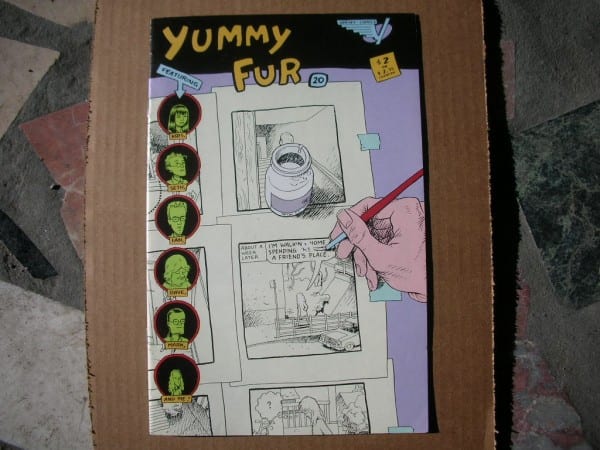 He’s also composing visually. He is not illustrating a script. I think this is why Chester’s timing is so sharp. There is nothing lost in the translation from written word to cartoon. 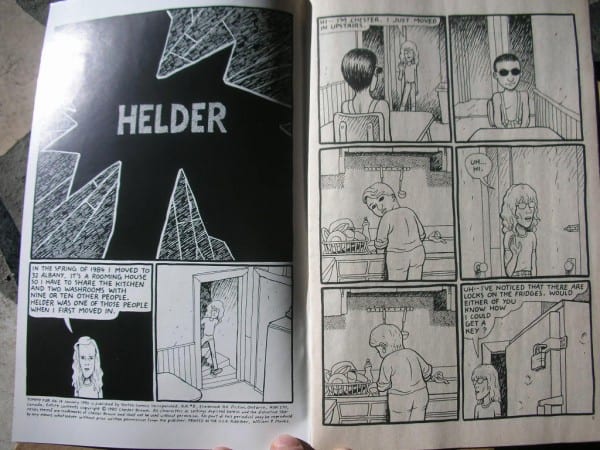 Yummy Fur 19 came out in the fall of ’89. It was a big deal at the time because Chester had stopped doing his "Ed the Happy Clown" feature and switched it up to produce something more personal. Issue 19's “Helder” is a ridiculously rich story that I can’t even begin to describe here. There was also a short Gospel of Matthew story in the back. Plus a great letters page. Man, did I love Chester’s letters pages.

Below the transformation of Chester's process. Left to right issues 19,20,21 of Yummy Fur. 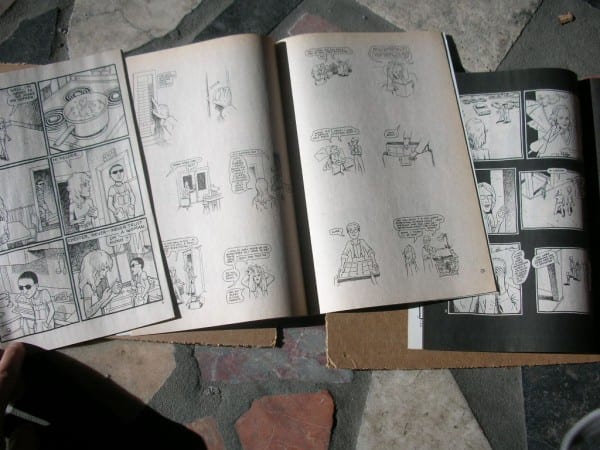 Yummy Fur 20′s “Showing Helder” was the making of the Helder comic essentially; the drawing of it. And finally YF 21 would be Chester’s first longform auto-bio strip, The Playboy. To me, this is a rapid and remarkable development not only in content but in structure. Why? Because in three issues Chet abandons the fixed 6 panel grid that he has maintained for the entire five year run of the book – 18 issues – and replaces it with a more organic collaged sequencing using panels of a more varied shape. And where it hinges is on issue 20, “Showing Helder”, where he uses no panel borders at all – but still maintains the grid’s left to right zigzag reading. 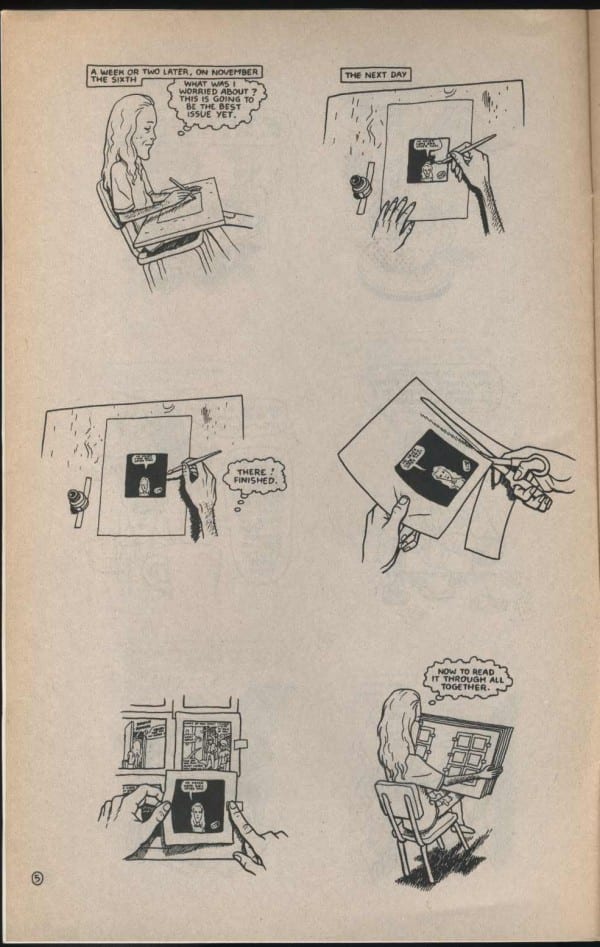 The invention, I believe, is that Chester found a way to balance the rigidity of the grid with the informal way he composed and arranged the panels which was direct and collage like. Chester was sequencing images one at a time on individual sheets of paper and ordering them on the grid – so it was very immediate, like writing. Chester wasn’t setting out to draw a complex mural-like pages – he seemed more interested to me in timing.

The pages become more like careful diaries. He abandoned the grid’s panel borders and then eventually escaped the “tyranny” of filling the page with panels. If the page only needed two small panels to convey what needed to be conveyed then why not do that? Fill the rest of the space with black. Make a powerful composition out of what is not there. It worked very well. Chester’s thinking process was right there for us all to behold. And you can see it change so clearly over these three issues. He shows us exactly how he does it and how he adapts his process to the new “personal” work.

I think what’s interesting to consider is what Chester may have learned during those grid years and how he applied the skill of balancing the grid to his more organic approach. Ed the Happy Clown was a heroic, action-adventure story and it read like a Kirby monster comic, like a '70s Kirby grid. Quick, like a storyboard almost, but depicting moments a movie would not – it’s all timing – the way all the pieces, moments fit together. The grid accommodates the heroic and the banal moments all the same. It’s like a metronome.

Then, with issue 19 of YF, Chester switches to autobio and he now has the spacing to make the everyday seem heroic – look at the distortion in The Playboy! – it’s like KIRBY - yet Chester manages to be so spare and clear in tone. Chester’s work reduces so beautifully - The Little Man collection is smaller than the original comics but it looks fine (imagine reducing a current Marvel comic to book size) – so while mainstream work has gotten more clogged because of the format, Chester’s 5-inch by 5-inch squares are perfectly phrased notes, simple melodies strung together on a metronome that sound just right at any volume, any size.

The phrasings become even more clear as The Playboy storyline goes on. Chester is is still “in tune” when he is creating his organic grid but he is centering things in the middle of the page like word balloons – something he could not do when he maintained the rigid fixed grid. So for example the below page’s word balloons become a “center focus” in a way they could not in a fixed grid. And this text is relevant to the story so it is a focus; a center. As the storyline continues through the next few issues and Chester begins creating very spare pages, one can almost feel him composing new arrangements to old songs. Meaning he’s still on the grid but he is using the invisible architectural power of the fixed grid to reinforce his own “intuitive” phrasings. Sort of like playing spare and sometimes “off” notes along a familiar melody. 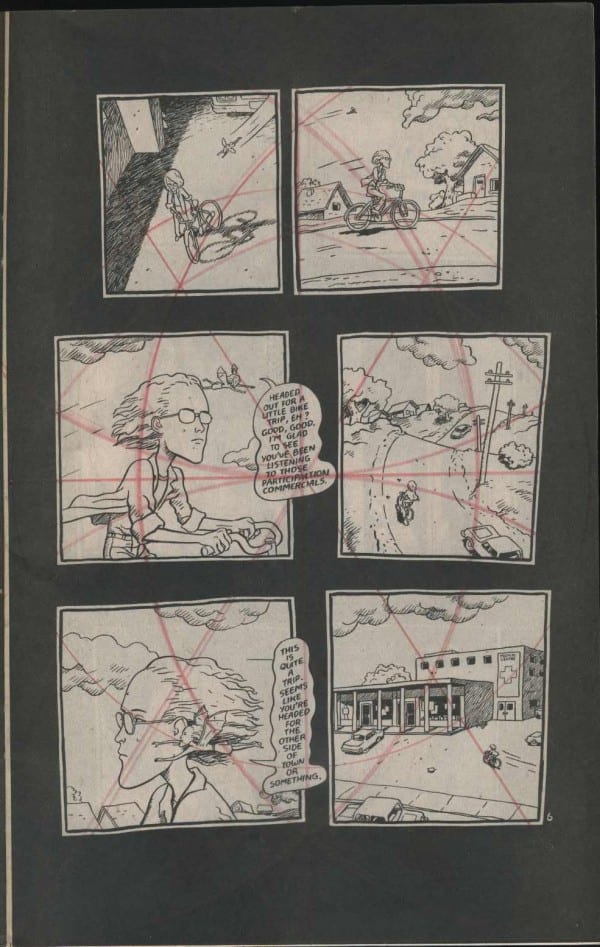 Now with a new version of The Playboy  I’m even more interested in thinking about how Chester edits and re-edits his compositions. It’s obvious that he does think about the story panel to panel and not as an overall page or spread. Yet he must think about the page and spread on some level. I understand it is a minor distinction, but if he says he “never” thinks about the page as a unit—then something similar is going on. He’s at least concerned with how much information he is revealing each page or the timing (and space) between the panels. Here's a post from the publisher about the differences in the two versions. The most notable formal change is the size and the removal of the black borders.

Below is a spread from #21 (The Playboy). Chester is still "working the grid" even if the panels are of slightly different sizes. 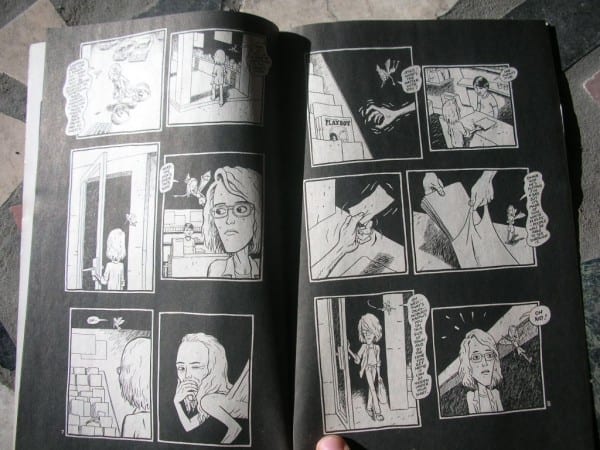 Here's a couple sequences from "Showing Helder" in #20 (below). Check out how Chester is adding a beat on the second tier of the grid--he uses three panels--not two. 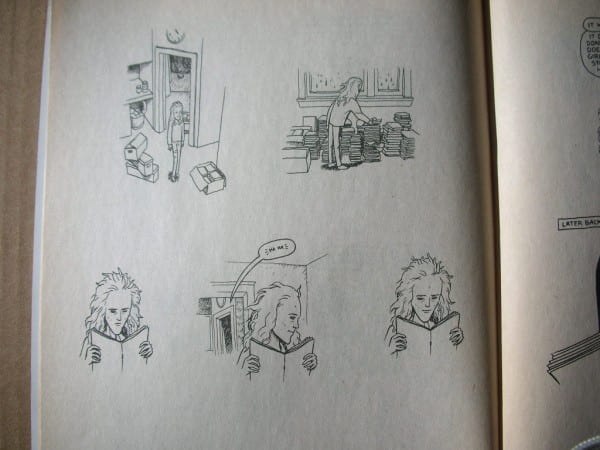 Also, Chester is centering elements within the page that he could not have if he had stuck with the grid. Look at how removing the grid allows him to center this important text balloon below. 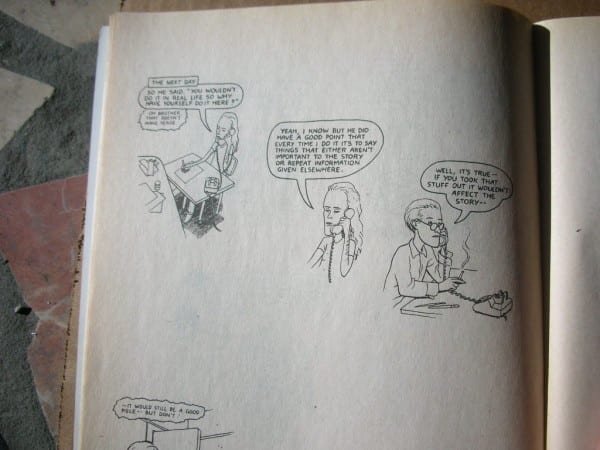 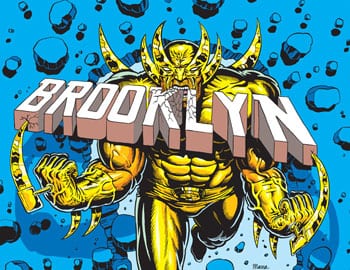 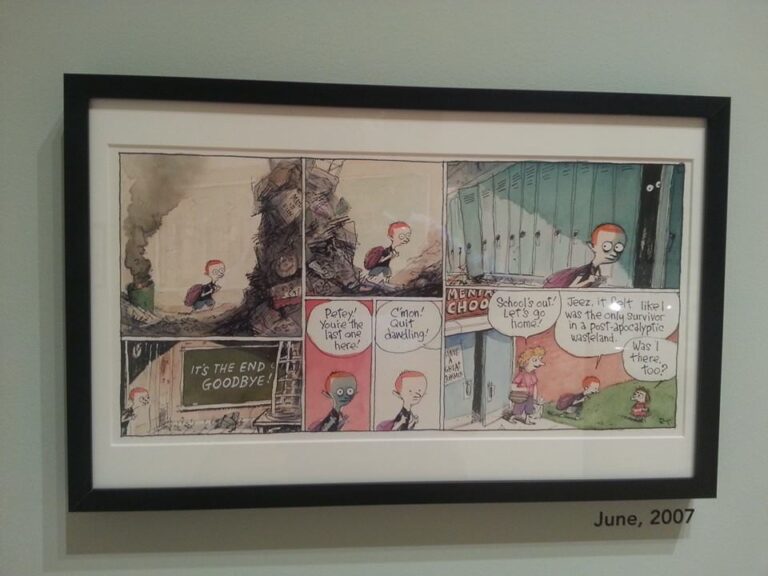