Hello again. Here's the run down:

* Tom Spurgeon has a great round-up of thirteen tributes to Bill Blackbeard. I second his recommendation to race over to read Dylan Williams' fantastic post, which contains the longest interview with Blackbeard ever published.

* So Gary Panter (with Chris Byrne) has curated an exhibition on Zap opening on May 12 in NYC. I've seen the original pages selected: it's a killer show. Great generational combo.

* Kim Thompson takes us inside an adventure in translating. Also: Joost Swarte book back on schedule.

* Here's an incredibly enjoyable con report over at The Mindless Ones. Frank and Jog: Meet your British counterparts.

* Via Top Shelf, the much-talked-about French graphic novel by Ludovic Debeurme, Lucille, has a preview up at Pen American Center.

* At HiLobrow: A selected series of posts by Adam McGovern on various aspects of pop culture, including some comics of interest.

* A random note: I know this is conflict of interest and blah blah, but damn the new Hate Annual 9 is good. Bagge knows his characters so well, and he never goes for the easy gag. Just great suburban American comedy. Also, if I had some dough, I'd race over to Scott Eder's site and buy some originals by Bagge. There are some killer pages on there.

The second installment of Richard Gehr's Know Your New Yorker Cartoonists, featuring Gahan Wilson! Ol' man Gehr is on a roll with these, having just completed a great interview with Roz Chast. Stay tuned for his monthly dispatches.

And coming up tomorrow: Matt Seneca contributes a great interview with Shaky Kane and David Hine on the occasion of their newly released book, Bulletproof Coffin. It's fantastic to see Kane, in particular, getting some attention from the general comics universe. Just five years ago Frank Santoro was a lone voice in the wilderness talking about his work, and it was some effort to track him down for a Comics Comics cover feature. Always a deeply idiosyncratic artist, Kane seemed, well, maybe lost to history or something -- his work residing primarily in back issues of Deadline and a handful of small press British comics. Anyhow, sounds like we're going to get to see some more, so that's a good thing. 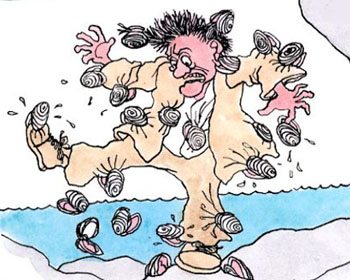 Gahan Wilson and the Comedy of the Weird 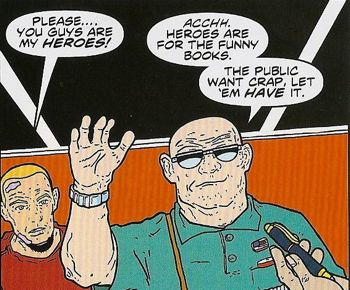