I reviewed Jill Lepore’s The Secret History of Wonder Woman for Hazlitt. The magazine was generous with their space, allowing me to give a detailed survey of a juicy book full of eye-popping information about William Mouton Marston, the creator of Wonder Woman. Yet that review was aimed at a general audience, so skimmed over the comic book specific stuff that the more connoisseurial readers of TCJ might be interested in. For that reason, I’m offering these notes on the book.

1. The first and most important thing to say is that The Secret History of Wonder Woman is a splendid work of history, one of the three or four best books ever written on comics and a crucial contribution to the history of feminism. Key to the success of the book is Lepore’s stellar detective work, her almost Sherlock-Holmesian ability to ferret out obscure historical facts and join them together in a plausible narrative. She’s been lucky to have the cooperation of at least some of Marston’s family. But unlike many other comics scholars, she doesn’t simply regurgitate interview material. She’s gone back to the primary sources whenever possible. She never takes a bit of folklore or family legend for granted: she tests them all against the documents and for their internal coherence and likelihood. Comics scholarship is a field where folklore is still rife, where ancient tall tales and newspaper guff continues to be repeated as the gospel truth. Lepore’s book is a crucial step in writing the history of comics in a more serious way, one that respects the canons of historical scholarship.

2. The book’s central argument is that Wonder Woman was the crucial link, a partially hidden one, between the first wave feminism of the late 19thand early twentieth century and the second wave feminism of the 1960s and 1970s. This is a bold claim, and a convincing one, which will force historians to reconceptualise the history of feminism, to see it not as a series of waves but as a constant flow. “The fight for women’s rights hasn’t come in waves,” Lepore writes. “Wonder Woman, one of the most important superheroes of the 1940s, was the product of the suffragist, feminist, and birth control movements of the 1900s and 1910s and became a source of the women’s liberation and feminist movements of the 1960s and 1970s. The fight for women’s rights has been a river, wending.” It’s rare to see a work of comics scholarship so audaciously link it with the larger realm of social history. Yet Lepore is confident enough to stake out a large claim and make it stick.

4. Biographies are often disguised autobiographies: biographers use other people’s lives to explore issues in their own. It’s not too difficult to see aspects of Lepore’s own life story echoing in the tales she tells. Marston was a rogue Harvard scholar who shocked his staid colleagues by dipping his oars in mass culture, not unlike Lepore, the Harvard historian who writes about Dr. Who and Wonder Woman for The New Yorker. Holloway and Byrne both wrestled with the problem of “having it all” (balancing work with family). One of the themes of the book is the difficulty that “having it all” poses for any woman short of a super-heroine. Yet Lepore herself – an Ivy League professor, a prolific author, a staff writer for The New Yorker, and the mother of three – seems almost Amazonian in her ability to “have it all.”

5. Lepore is admirably forthright on the nature of Marston’s polyamory (which encompassed not just Holloway and Byrne but also the liberated librarian Marjorie Wilkes Huntley). Yet there is one area where Lepore become reticent. All the evidence in the book points to the conclusion that Holloway and Byrne were bisexuals who loved each other as well as Marston. Yet Lepore never says so in blunt terms, merely hints at it. It’s likely that this gingerly treatment of bisexuality derives from sensitivity to the descendants of the Marston/Holloway/Byrne love triangle. Such deference to a source is understandable but it would have been nice if it weren’t necessary. Lepore's restraint on this matter might be tied to the fact that her book is very much a novelistic narrative history: she unfolds the story the way a fiction writer would, delineating character by action rather than exposition. As with good fiction, readers are meant to infer more than they are explicitly told.

6. The major problem with the book is it’s unwillingness to engage the rich existing literature on Wonder Woman (in particular) and comic book history (in general). Lepore has written a narrative history, which means her extensive footnotes are largely devoted to giving the sources for her facts. She doesn’t feel the need to argue with earlier scholarly excavations and interpretations. This has the distorting effect of making it seem like she’s the first person to tell this story. Many innocent readers will think that everything in the book is Lepore’s discovery. Yet the broad outlines of Marston’s life – his work inventing the prototype of the lie detector, his polyamorous relationship with Elizabeth Holloway and Olive Byrne, his ties through his lovers to the feminist and birth control movement – have been known for at least two decades or more. In a very real sense, Lepore is working on the foundations built by scholars like Geoffrey Crinson Bunn, Lillian Robinson, and Francine Valcour. (Bunn and Valcour wrote important doctoral theses which are as yet unpublished. The late Lillian Robinson was the author of the 2004 book Wonder Women: Feminisms and Superheroes.) All of these scholars go unmentioned, which is a troubling omission. Particularly objectionable is the erasure of Bunn (whose scholarship was pioneering) and Robinson (whose theoretical approach would have enriched Lepore’s book). Other, more recent books that take up Wonder Woman – notably Ben Saunders' Do the Gods Wear Capes? (2011) – are also ignored. Ignoring these scholars is especially troublesome because of the power dynamics at work. Lepore has a lot of institutional strength: she teaches at Harvard, her book is published by Knopf, and was excerpted by The New Yorker. By contrast, Lillian Robinson was for much of her career a nomadic scholar, moving from one adjunct job to the next. Despite her precarious status in academia, Robinson wrote many important books. It seems churlish of Lepore to write Robinson out of history.

7. Connected with point 4, Lepore doesn’t make the best use of the comics scholars she does cite such as Gerard Jones and David Hajdu. She is so focused on Wonder Woman that she doesn’t ask whether aspects of the character might overlap with other superheroes or pulp creations. A fuller awareness of the milieu of early comic books would make Marston and Wonder Woman less strange. Progressive and even radical politics were quite common in the early comic book world. Both Superman and Captain America were products of the Popular Front (the loose anti-fascist coalition that ran from the leftwing of the Democratic Party to the revolutionary left). We see Popular Front themes in the villains Superman fights in the early comics: exploitive mine-owners and arms dealers. The cover of the first issue of Captain America (the superhero draped in an American flag punching out Hitler) was a veritable Popular Front poster. Jules Feiffer, then a teenage socialist, mocked red-baiting in stories he wrote for The Spirit. Lev Gleason, publisher of Crime Does Not Pay, was a left-wing activist. Marston’s ties to feminism seem less surprising when we realize that the comic book publishers, working in the ambience of New York immigrant culture, were often open to progressive and radical ideas. Nor is the outré sexuality of Wonder Woman – the constant bondage imagery – so surprising when we realize that the early comics overlapped with the world of soft-core pornography. As historians like Gerard Jones, Blake Bell, and Michael J. Vassallo have shown, the early comics publishers were also the producers of girlie magazine and lurid pulps, material that finds an echo in Wonder Woman. We shouldn’t forget that cartoonists like Joe Shuster and Steve Ditko moonlighted in BDSM art. Lepore takes note that Wonder Woman was constantly being tied up and spanked but might have done well to compare Marston’s stories to the more openly sadistic or leering work found in Will Eisner’s The Spirit or Boody Rogers’ Babe.

8. Like most historians, Lepore’s training is textual. She doesn’t do much with the visual side of comics. H.G. Peter, who drew Marston’s Wonder Woman stories, gets short shrift. That’s unfortunate because Peter played a major role in making Marston’s bondage theme acceptable in a comic book aimed at an all-ages audience. Peter, who was sixty years old when he started working on Wonder Woman and hence a good four decades older than many of his peers. He had a quaint, Victorian style that call to mind fairytale illustrations. If Peter had drawn with the illustrational sheen of an Alex Raymond or Hal Foster, the bondage theme in Wonder Woman might have been too sexually explicit. As it was, Peter’s art served to soften Marston’s script, keeping the stories safely in the realm of the make-believe.

In sum, Lepore’s The Secret History of Wonder Woman is a major event in comics scholarship. But no scholarly work stands alone; all are always part of a wider conversation. Where Lepore’s book is weakest is when she fails to engage with other scholars, who have done work she needs to acknowledge. At crucial points in her book, there is a failure to open up lines of communication or learn from pioneering scholars. Lepore’s book is still masterful but it could have been even better. 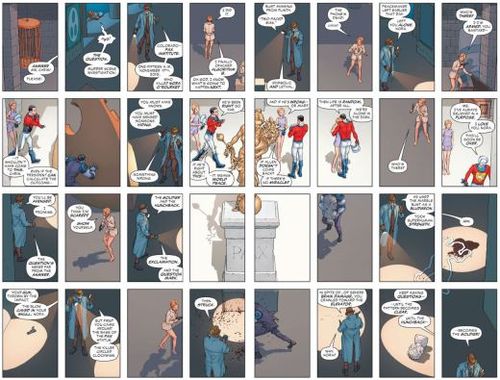 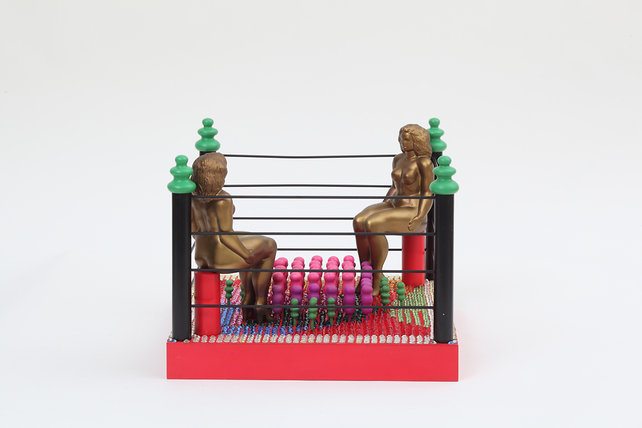