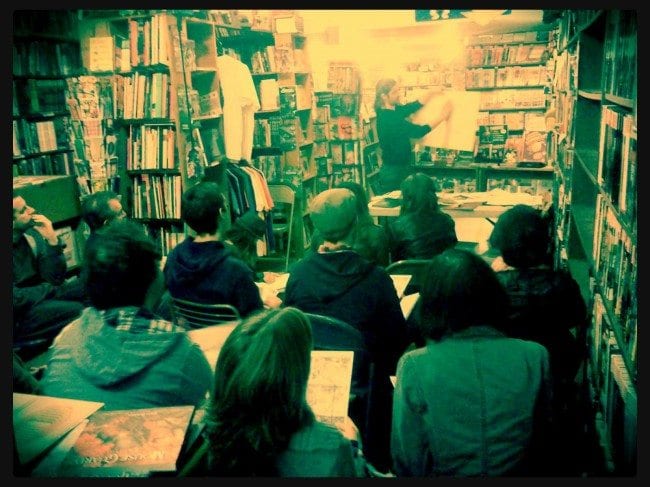 Goin' back to Cali
-----
At last! Back to civilization. I have begun my three week tour of the west coast. Signing tour, you ask? Pfft, boring! Come on down to a FREE workshop about comic book layouts. Dig it, Charlie - I am on FIRE!

Just this last Thursday I was at The Escapist Comic Bookstore in Berkeley - and the other night I did my song and dance at Mission: Comics and Art. Two unbelievable comic book stores that impressed me tons - with enthusiastic crowds to boot - a nice way to start this tour.

I was embarassed at the Escapist cuz I only brought 10 handouts - thinking "no more than ten people are going to show up". And of course I was caught short when about 25 folks did, ha! Ahem. Doing my Nutty Professor routine distracted them from the bungle.

How can I describe the scene - me behind a folding table with a large sheaf of papers and shuffling them about holding various ones up to make a point, "Here is the size CF draws his originals and here is the size of a Wally Wood page - one is 8.5 x 11 and the other is 12 x 16. What's the big deal about that? Well, if you want to draw like CF or like Wally Wood - don't you want to know how big they made their marks? When you go to a museum you aren't looking at a reduced reproduction of a Picasso drawing. You see the marks actual size.

"Whenever I really want to study a comic book artist I try and find out what size their originals were. I have a Roy Crane original that rearranged my thinking. There is nothing like seeing an original and understanding how the artist made his marks. But of course most of us can't afford originals so the thing I recommend doing is going down to the photocopy place and enlarging your favorite cartoonist's comic up to original size. I did that for some Gene Colan comics and it really helped me see his work more clearly and to understand the way the marks were made."

And then I probably launched into some other riff. I can't remember. I just wing it and try and gauge what the audience is picking up on. Too much of the geometry talk gets a little abstract - so I keep it lively, keep it lively. But really the folks were super engaged and asking great questions and had me on my toes - so thank you, thank you all for coming prepared and ready to rumble.

Thank you Sophie, Jordan, Ray, Perry, and Jack at The Escapist for letting me do my schtick at this amazing gem of a comic book store. Packed with great stuff from stem to stern - I felt like I was in the hull of a ship lined with every comic book, manga, BD, mini-comic and zine and imaginable.

Thank you Leef at Mission: Comics and Art. Here it is - the new regime - this store felt like a gallery as much as a bookstore - and it works.  The gallery portion really lent itself to my routine where I put a template for a comic up on the wall and it looks like a postage stamp. In the heart of Friday night San Francisco - thrilled to be back in the world. Thanks everybody for coming down to see what I was peddlin'.
-----

big thanks to Jessi Rymill and William Bostick for putting me up - and to Gabby Gamboa for going out for a burrito and for reminiscing about 1994 Bay Area comics scene with me. RIP DYLAN. The nineties were over by '96. Rip it up.

photo at top from The Escapist by Perry Shirley

NEXT WEEK! and BEYOND!

Why do some comics read easier than others? Is it the story, the cartooning or the page design? Frank Santoro will demonstrate how some cartoonists such as Hal Foster andHerge used visual harmonies and structures in their page designs much like classical oil painters. Discover the similarities between visual and musical harmonies and how some of the great cartoonists used dynamic symmetry like a map to organize their stories.

Also, after the talk, Frank will lead an informal FREE workshop focusing on formats available for the comic book maker in 2012. Everyone is welcome. Come see what Frank Santoro’s Correspondence Course is all about - or come on down just to argue with Frank - maybe even buy a book and get it signed. 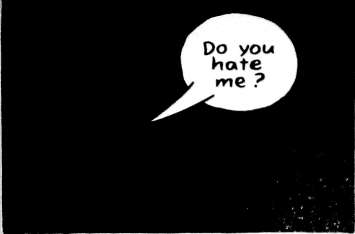 Everything Is All Right 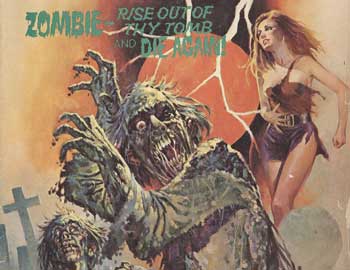