If you’re a regular reader of This Week’s Links, the most recent selection of which can be found below, then I hope you followed last week’s advice and invested in some premium conspiracy tracking gear, because the comics market is making even more moves, and it’ll take all night to figure out whether they’re going to be good or bad for business.

Maybe they’ll be both? They’ll probably be both, won't they? Actually it didn’t take all night, as the situation’s the same as it ever was. Sorry. I hope you kept the receipt.

Taking it from the top… This week’s news.

• Publisher’s Weekly report on a continuing rise in sales of print books, as figures for the first half of 2021 were up 18.5% overall, compared to the same period last year, with graphic novels comprising nearly 20% of adult fiction unit sales for those six months, more than double the showing from 2020, with manga, primarily those series published by Viz Media, also seeing big sales, especially in titles with accompanying anime series.

• Chris Pitzer has announced that AdHouse Books will be ceasing operations as a publisher at some point next year, with 2022 being taken as an opportunity for a convention farewell tour - the reasons given make for interesting reading (especially taken in parallel with the next news item), and include falling orders from Diamond Distribution, and unease with the growing Kickstarter model of crowdfunded publishing.

• The Beat reports on AHOY Comics’ announcement that they’ve entered into a deal with Lunar Distribution for some of their single-issue comics business, alongside an existing periodicals deal with Diamond Distribution (who also distribute AHOY’s collected editions to the direct market), and with Simon & Schuster bringing AHOY’s collections to the book channel (confused yet?). I’d read this in tandem with Brian Hibbs’ recent Tilting At Windmills article on the upcoming closure of Comix Experience Outpost, as well as Chris Pitzer’s AdHouse announcement post above, for a less than rosy look at Diamond’s status quo in the distribution business, and the ongoing turbulence in the direct periodicals market, as a collectibles boom akin to that seen in the 90s precariously props things up.

• ShortBox announced the penultimate recipients in 2021’s mini-grants funding program, with Sameena Anis, Namsai K, and @acs1512 being awarded £200 - the final call for applications for 2021 is now open, and closes on the 13th of August.

• Finally this week, the sad news broke that artist Robson Rocha passed away on the 11th of July, aged 41, from COVID-19 - Multiversity Comics, SYFY Wire, and comicbook.com have a selection of tributes to Rocha posted on social media from friends and peers, and you can see a selection of his work on his Instagram account.

Looking more alive than ever before! pic.twitter.com/ZlD6L9mGRn

That’s why they call it ‘money’... This week’s reviews.

Timothy Callahan reviews the grotesque beauty of Dan McDaid’s Dega - “The nightmarish story doesn’t operate completely on dream logic, but bits of it are beyond the comprehension of the protagonist. McDaid unbalances the reader as well by providing hyper-specific details without context, like the blank mask and the cape of feathers or the screeching of a discordant train, and drawing some later moments as if seen from the corner of your eye – not out of focus, but not clearly representational.”

• Nathan Simmons reviews the mixed successes of Marvel Comics’ Conan: The Songs of the Dead and Other Stories; and the striking success of Jeff Parker, Javier Pullido, et al’s Ninjak#1.

- The marvelous freshness of Tom Gauld’s The Little Wooden Robot and the Log Princess.

- The earnest silliness of Dan Abdo and Jason Patterson’s Barb the Last Berzerker.

- The astonishing silences of Jason Pamment's Treasure in the Lake.

- The engaging honesty of Samantha Edwards' A Tale As Tall As Jacob.

Gabino Iglesias reviews the spectacular accomplishments of Kristen Radtke's Seek You: A Journey Through American Loneliness.

- The broad meditations of Etienne Appert’s River of Ink, translated by Ben Croze.

• Ryan Carey reviews the seamless quality of Jaime Hernandez’ Is This How You See Me?.

An honest recounting of events… This week’s interviews.

Ian Thomas interviews Bill Campbell about Rosarium Publishing, The Day the Klan Came to Town, ideas segueing into research, shifting interests between comics and science fiction and back again, and the preciousness of identity - “I wouldn't really consider myself an historian—more a history buff. However, [the Carnegie] riot being unknown has given me a lot of thought. This should be an anti-racism celebration. Hell, why not have parades? But having grown up there, it made me realize that for a lot of people, racism in itself wasn't bad; racism against them was. Also, once you're admitted to a club, you want to pretend that you've always been a member.”

• Nancy Powell chats to Imogen Greenberg and Isabel Greenberg about Athena: Goddess of Wisdom and War, relatability of the gods, interpretation of oral history, and the collaborative process.

- Peter Milligan about Out of Body and The God of Tremors, how to portray psychedelic experiences effectively, and the points where historical facts meet fiction.

Scott Simon chats to Sam Nakahira about charting the history of K-Pop in comic form for Vox, and the political activism that K-Pop fans have been engaging in, as well as the corporate monopolies over musical artists.

Brigid Alverson speaks with Dave McKean about Raptor, interesting narrative structures, creating intrigue without frustrating the reader, and how you can spot a good comic.

Wendy Browne interviews Mohsen Ashraf, Patrick Meaney, and Jeff Edwards about Syphon, creating characters relatable to contemporary readers, and how you could use superpowers to actually help people in need.

• Here at TCJ, Tom Herpich takes on the Herculean task of codifying a pre-1998 reading list of the comics work of Masamune Shirow, and the peaks and valleys one will find themselves traveling over and through when doing so - “It’s kind of magical to watch everything that was annoying about the first volume [of Appleseed] slowly, almost imperceptibly gradate towards its more mature, entertaining form, but it’s definitely not there yet, and this was still kind of a slog. There’s a lot of nice, authentically complex feeling, elliptical dialogue - but actually trying to parse the political and philosophical content made my brain glaze over, and gave me that Shirow-specific itch, where I can’t quite tell if he’s giving me enough information to figure out what’s going on, and so I end up not wanting to risk wasting the brainpower on an attempt if all the pieces are potentially not there.”

• Also for TCJ, Conor Spielberg looks at the engagement of Watchmen and The Dark Knight Returns with Ayn Rand’s philosophy of Objectivism, and the Mr. A. comics of Steve Ditko - “It is fair to say that no superhero in Watchmen is supposed to be ideal; in fact, they are quite the opposite. Rorschach is a corruption of a familiar archetype that encourages the reader to question things we may take for granted in the superhero genre. One could say Watchmen’s purpose is ideologically opposed to Rand, attempting to destroy the image of an ideal man.”

• Tegan O’Neil presents part three of a series looking at the many aspects of the caped crusader with a dive into the quantum waveform of possible Batmans, and how these collapse into a singular vision when put on the screen, for better or worse - “The intersection of justice and masculinity is where Batman resides, where his fans and his creators like him. It’s contested space. It’s not cultural space to be ceded, not without consequences. These are our stories, too, and yours. Which is how I make peace with the fact that there are many Batman stories I do not like, many Batmen I find abhorrent.”

• Kelly Kanayama returns to Patreon posting with a free-to-read piece on the trope of Evil Superman™, and the red flag that goes up when a creator is a little bit too keen to roll it out for an airing.

• Elizabeth Sandifer’s The Last War In Albion steps through the looking glass, as invocation of quantum physics and tarot in Arkham Asylum, wrapped up in the literary works of Charles Lutwidge Dodgson, leads inexorably to Crowley, and Grant Morrison’s theatrical works at the Edinburgh Festival Fringe.

• For NeoText, Chloe Maveal documents the more frenetic side of British comics in the 80s, looking back at Deadline, and its light burning short but brightly.

• As the exhibition "Kubuni, les Bandes Dessinées d’Afrique.s" opens in Angoulême, writing for The Africa Report, Nicholas Michel explores the work on display, and speaks to creators and the exhibition's curators about the cultural history and creative futures it documents.

• Flagged up in the comments on last week’s Links round-up, over at Comics Grinder, Henry Chamberlain has an essay on the work of Charles Johnson, the historical and contemporary realities of Black cartoonists’ work being published in mainstream outlets, and the Chicago Comics: 1960s to Now exhibition.

• Shelfdust’s ongoing quantification of the relative qualities of mutants continues, as Sean Dillon presents data on David Haller aka Legion’s legacy, while Tom Shapira furthers the Secret Invasion invasion, taking a look at issue #7’s damp squib of a fight.

• Shifting from regular programming to present a week of Jack Kirby appreciation, Ryan C has a series of features over at Four Color Apocalypse looking at 2001: A Space Odyssey, Our Fighting Forces, Captain Victory and the Galactic Rangers, Superman’s Pal Jimmy Olsen, The Eternals, Devil Dinosaur, and Black Panther.

• Mike Peterson rounds up the editorial beat for The Daily Cartoonist, as history is whitewashed, imperialism remains in vogue, windmills are tilted at, and evidence is denied.

• Kicking things off with something from last month, as The University of Oxford’s Rothermere American Institute hosted a live book club event for Paying the Land, as Dr Alice Kelly chaired a discussion with Joe Sacco, Hillary Chute, and Paul Andrew.

• Noah Van Sciver shared part two of a cartoonist chat with Art Spiegelman, as they discussed the pains of collecting Raw, comics nomenclature, and the heyday of MS-DOS.

• A fresh Lockdown Tape was brought forth from 2000 AD’s Thrillcast, as MOLCH-R spoke with Michael Carroll and Maura McHugh about the new 2000 AD Sci-Fi Special, and the logistics of crossover events.

• Dan Berry welcomed Michael Sweater to Make It Then Tell Everybody this week, as they discussed overthinking things, the realities of book advances, and the pitfalls of esoteric titles.

• Christopher Butcher hosted this week’s episode of Mangasplaining, as the team took a deep-dive into Jiro Taniguchi’s A Journal of My Father, and paternal relationships in general.

• David Harper was joined by Dave Baker and Nicole Goux for this week’s Off Panel, as they spoke about Everyone is Tulip, and how books get made.

• Calvin Reid welcomed Juni Ba to Publisher’s Weekly’s More to Come, as they discussed Djeliya, and the origins of the characters and the story they populate.

• Gil Roth welcomed Anita Kuns to The Virtual Memories Show, as they spoke about Another History of Art, art with a purpose, and career evolutions.

Feeling optimistic about being able to see people safely this summer✨ pic.twitter.com/DnO4RNROIF

That’s it for this week, I’m going to go and look at microfiche for the next week, and then swallow it and pretend I’m in The Eiger Sanction, until it’s time for more links. Oh, and the return of virtual San Diego Comic Con… *Akira Ifukube’s ‘Godzilla’s Theme’ plays* 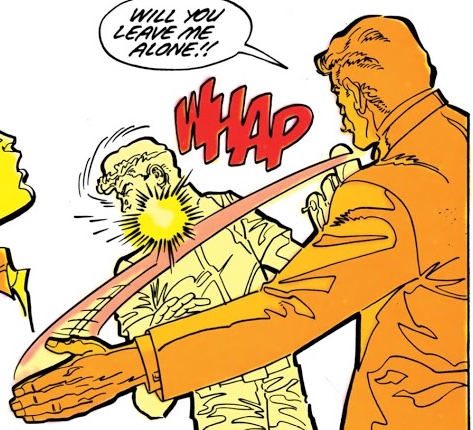 The Light That You Shine Can Be Seen – Part 3 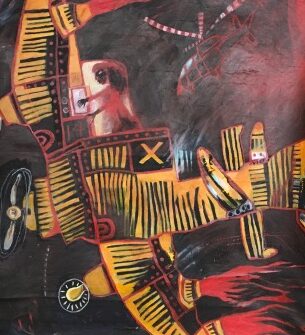