In 1969 my parents bought a run-down house in Brooklyn (40 years later it is still a run-down house in Brooklyn, but now it has an awesome mosaic on the front). I am sure the house was an endless series of headaches, but for a kid it was a dream: a cherry tree to climb, fenceless backyards, and a basement full of boxes of junk long-dead tenants had left over the course of the previous century, including old coins, books and photographs. But far and away my happiest childhood memory—because it is the one that transformed me into the guttergeek I am today—was when my parents pulled up the rotten flooring on the landing and revealed hundreds of pages of old newspaper comics. They were stained, brittle, musty. But they were also beautiful, funny, and a revelation. Mutt and Jeff, Happy Hooligan, Gasoline Alley: I took the whole messy pile back to my room and read them over and over again until they eventually broke down into mildewy confetti in my hands.

That first surprise under the crackling linoleum set me on a course that soon had me hunting down Marvel and EC, Mad, and any reprint edition of the classic strips I could find (few and far between in the dark days of the 1970s). From that day on I also became an inveterate haunter of other people's attics, a collector of other people's scrapbooks, a clipper of other people's old paper—all in an attempt to repeat the thrill of discovery when the old brown flooring came up and first revealed to me the wonders of comics.

Of course now I have an old attic of my own filled to the rafters with clippings, tearsheets, mangled magazines and rescued comics supplements drying out under my watchful care after decades under other peoples' dripping sinks. But I am also lucky enough to have daily access to the ultimate comics attic from the ultimate rescue operation of the 20th century: Bill Blackbeard's collection and all the rest at the Billy Ireland Cartoon Library & Museum here in Columbus. And between the two attics (one of them a lot cleaner than the other), I have a lifetime of moments that come pretty close to duplicating that first discovery.

This column will be my monthly report from the front—or, more accurately, from the rafters. I promise no coherent narratives or polished academic arguments: instead "The Attic" will be made up of random tidbits, half-baked revelations, and the assorted viands from comics history—all the stuff that makes me say "cool" to myself in dark rooms or chilly archives when I am scouring pieces of old paper. As an aperitif, here are a few that had me muttering happily to myself and earning a decisive "shhhh" from the attending librarian or an annoyed flutter of wings from the resident bat....

One of the greatest joys of musty old papers is finding reference to the life of cartoonists as they were just in the process of making that strange and fateful choice to become "professionals."  Sometimes it is just a random mention of a young man who makes news only because his father happens to be a judge, as when, on January 14, 1891, the San Francisco Morning Call reported that 15-year old James, "son of Judge Swinnerton of Stockton, has returned to this city to resume his art studies." One year later, now working at Hearst's San Francisco Examiner, Swinnerton would go on to create what is arguably the first newspaper comicstrip, The Little Bears.

Sometimes it is not family connections but world-historical events that brings a young cartoonist briefly into the limelight before his or her time. For example, in the New York Evening World on February 18, 1918, we read of a competition among local miltary regiments at which the 305th's Ju Jujitsu instructor, Capt. Allan C. Smith, gave the visiting dignitaries "a start by picking up big Lieut. Percy Crosby of the 305th Infantry and slamming him down on the mat unconscious. Before the officials had recovered from the shock Capt. Smith had revived him." Crosby was at the time First Lieutenant of the 305th Infantry of the 77th division, and would publish his first book of cartoons about his experiences as a solider that same year. A few years later, he would create his most famous creation, Skippy.

In truth, Crosby was already a published cartoonist, although far from the successful one he would become. Digging back into some issues of the early socialist weekly, The Call, in 1911, we find some rather remarkable editorial cartoons from his brief stint working at that paper—all the more remarkable given Crosby's fierce opposition to anything that smacked of Marxism later in his career 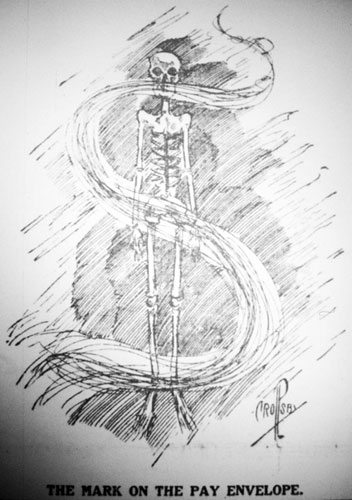 But it is not only Platinum Age goodies that turn up beneath the floorboard. For example, I was delighted to learn that in 1952, Charles Biro, of all people, was chairman of the Youth Guidance Committee of the National Cartoonist Society. But even more surprising than the fact that the co-creator of Crime Does Not Pay was charged with the moral guidance of young comic readers was the plans Biro brought up in a spring meeting for the creation of  a "psycho-therapy clinic" under the auspices of the Society.

Of course Biro's election as head of the Youth Guidance Committee and the plans for an NCS psychotherapy clinic all originate from the same source: the growing cloud of anti-comics chorus emanating from youth groups and professionals such as Fredric Wertham, one that had begun to impact even those cartoonists working outside the comic book industry. In fact the minutes from the December meeting of the Society include an urgent appeal from Alex Raymond (Flash Gordon, Rip Kirby) to the group that they stand up against the forces gathering to censor comics and comic books:

Relative to these groups I have only this to ask the members of the National Cartoonists Society—That you must never forget that you are tremendously important as a group. My stand has been and yours must be that no form of legislature on censoring of the comics can be tolerated…. It is against freedom of speech. Remember that we represent our profession. It is well and good to meet here to have fun and entertainment and get drunk, but let's never forget the seriousness of the profession which we represent.

Just how close these forces had come to the gates of the newspaper comics is made clear by correspondence from around the same time between the NCS lawyer, Benjamin Schankman, and Milton Caniff (Terry and the Pirates, Steve Canyon), as Caniff tries to figure out how to respond to an inquiry from the Cincinnati Committee for the Evaluation of Comic Books, which was now focusing on comic strips and had found several to be “Objectionable” (Steve Canyon, Buzz Sawyer, The Spirit) or “Very Objectionable” (Batman, Mandrake the Magician).

Of course, as fate would have it, the Comics Code would sweep Biro and Crime Does Not Pay out the door by 1954, and Alex Raymond would be killed in a car crash in 1956. A year later, Frank Miller was born, himself something of a creative lovechild of Raymond and Biro and of course a cartoonist who would go on to be a sworn enemy of the Code and all it stood for. In 1972, we find him a high school student in Vermont, self-publishing (with the help of the school mimeograph machine) a 'zine called Epic. In issue #9 he introduces a new friend to the publication, a guy he met through the seminal amateur press group, APA-5. And what better way to end this first grab-bag of random gleanings from the Attic than with a couple of images from 1972 from these two 15-year olds, Miller and Paul Chadwick, just setting out on the same strange road that Jimmy Swinnerton set out on at the same age almost a century earlier.... 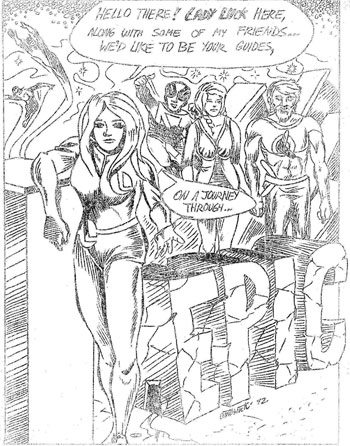 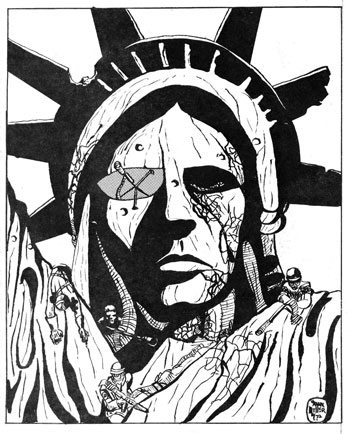 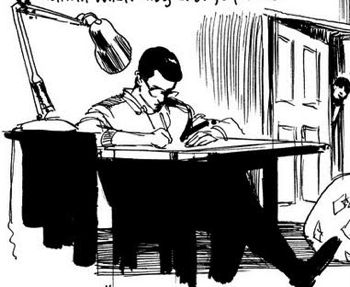 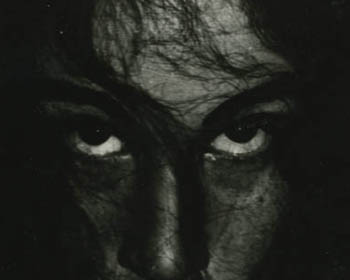