There's no question that webcomics can change your life for the better. For example, you can read my webcomic and have your life filled with brilliance and joy. Or you could turn to the small but increasing number of webcomics dedicated to self-improvement. Because who knows how to live better than a webcartoonist?

Given that the current trend in online comics—or, hell, online anything—is toward bite-size viral material designed for sharing on social media, I'm surprised there aren't more webcomics built around daily (or weekly) affirmations and inspiring messages. Nobody has page-a-day desktop calenders anymore, and something has to fill the void. But the inspirational webcomic market seems currently sewn up by Gavin Aung Than's enormously popular Zen Pencils, which illustrates inspirational quotations in comics form. It's a clever idea that gives Than a surprising amount of creative flexibility; as long as people keep writing and saying stuff, he could conceivably draw Zen Pencils forever.

Than's taste in quotations tends toward muscular odes to hard work and self-determination (according to the site's FAQ, his personal favorite is from Teddy Roosevelt), but he also covers creativity, spiritual fulfillment, relationships, scientific curiosity, and sometimes just passages of lyrical poetry. (And, every once in awhile, Zen.) Lately, most of the quotations come from reader suggestions, taking advantage of the natural interactivity of the Web. As the strip has grown in popularity, it's been translated into eight languages, including Korean, Russian, and Hindi. Than has also gotten more careful than he was in early installments about checking the attribution of quotations and getting permission from the authors before making print versions of his strips; early on, he was a little sloppy with his sources.

As ingenious as the concept is, it wouldn't work as well as it does if Than weren't a darn good artist. Sometimes his comics are simple illustrations of the material (a Neil Armstrong quotation floats alongside images of Armstrong on the moon), while others come up with unexpected parallels (John Donne's “for whom the bell tolls” passage accompanies a comic about a middle-aged heavy metal fan learning about the death of the frontman from Slayer). Each strip is as long or short as it needs to be. Most comics stand alone, but there are a few recurring characters: a medieval monster slayer, a skittish couple in love, a woman who quits law to become a pro wrestler. Than's basic art style is bright, clean and Wacom-y, but he plays with different styles to great effect, presenting various strips as Chinese brush paintings, Disney cartoons, or midcentury advertisements. He illustrates a quotation from Bill Watterson in the style of Calvin and Hobbes. Updating roughly once a week (though usually less), Zen Pencils provides a full-color shot of positive thinking.

But you can't live on positive thinking. You know what you can live on? Chickpeas. Or so advises Poorcraft, written by Spike Trotman and drawn by Diana Nock, a comic on “the fine art of living well on less.” Poorcraft started as a Kickstarter-funded print comic and is now being serialized online. (Which is the first lesson in thriftiness, I guess: hold off on buying a comic long enough, and eventually it'll turn up on the Internet for free. Wait, no. Ignore that advice. Buy my books.)

The relentlessly chipper Penny and her dog Nickel give their profligate friend Mil lessons in frugal living, from Craigslist shopping to urban foraging to making your own floor cleaner to living the car-free lifestyle. There's also a lot of basic advice on managing a budget that ought to be required learning in high school, but it isn't, so read this comic instead. And pay off your credit cards. For the Web version, Spike includes updated notes, providing links to additional resources and pointing out that, for example, the chapter on buying health insurance has been rendered largely obsolete by Obamacare. Penny can get preachy (“Most people have too much furniture!”), but the advice is solid and Nock's black-and-white rubber-hose artwork is charming as all hell. Anyway, you learn how to season a cast-iron skillet.

And if Teddy Roosevelt and urban chicken farmers haven't answered your life questions, you can always write to an advice comic. The little king of advice-column comics is the witty weekly syndicated strip Tiny Sepuku, in which cute cartoon critters offer sarcastic advice to anyone masochistic enough to write in. But Tiny Sepuku isn't a webcomic unless you count everything syndicated on GoComics.com as a webcomic, which maybe you do, it's a free country. Anyway, the Internet now has its own entry in this admittedly very small and specific genre: the Tumblr-based “online cartoon advice column” Advice Comics, updating every few days for almost a year now.

Advice Comics is written and drawn by a stable of--as of this writing--six cartoonists, each with a different focus. Boyfriend has a Bill Griffith-ish psychedelic art style and a penchant for stoner philosophizing. Tuna Panini boasts a creepy underground style and a creepy underground perspective. Dr. Entrails, with the blotchy coloring-book gore, dispenses unreliable medical advice. Mulbert, a cartoon moose rendered in a variety of styles, gets introspective. Blocky, minimalist Sally provides a sincere feminist perspective. And Mr. Ray's lovingly detailed panels sometimes cynically demolish the letter-writer's dreams, sometimes veer into unexpectedly touching insight (to a self-described “emerging writer,” he advises, “Look into the eyes of the people you're 'emerging' to”).

The advice is sometimes useful, sometimes not; sometimes funny, sometimes rambling. The cartoonists take on questions serious, facetious, and bizarre (“How much do you think is reasonable for a socialist to spend on their own wedding?” “What should I get Brent for Christmas?”) The quality of the art varies wildly depending on the artist and how much time he or she seems to have devoted to a particular installment. Like many webcomics, Advice Comics posts a lot of guest strips, but this is the kind of comic that benefits from letting more cooks stir the broth. It's all kind of a mess, but a fun—and on occasion genuinely helpful—mess.

And there you are. You’ve been psychically buttressed by the words of Maya Angelou, you know how to patch torn clothing, and Brent’s Christmas gift is wrapped up. (He gets a hastily-repaired Maya Angelou T-shirt.) Now your life is perfect. And if it’s not, read more webcomics. 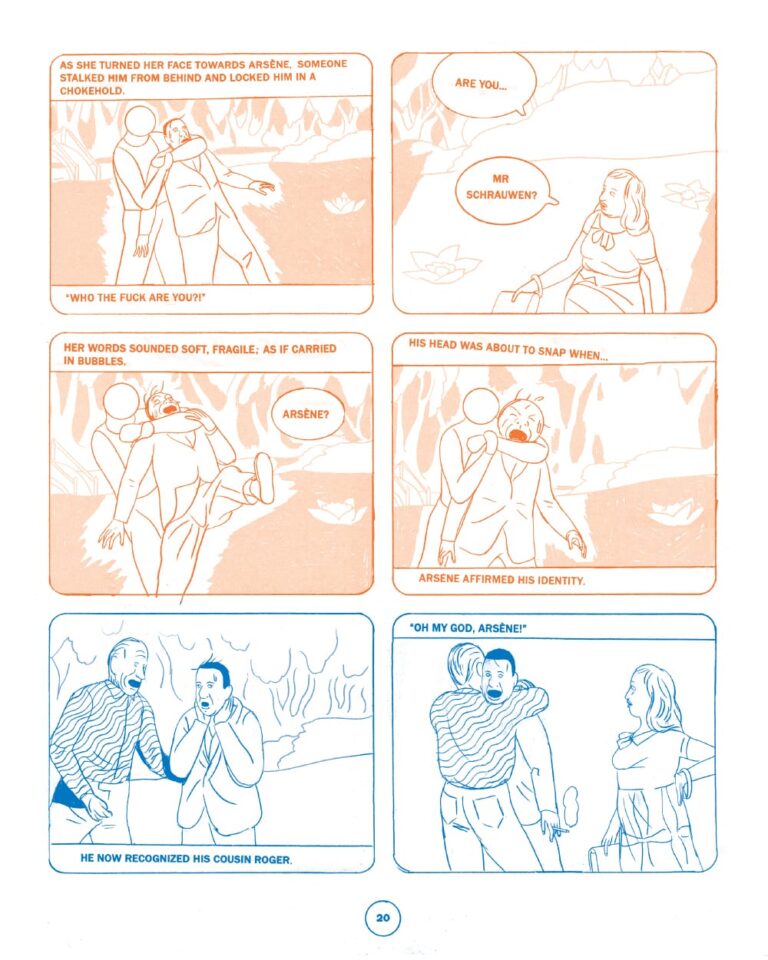