In my last column, I announced, perhaps foolishly, my intention to write capsule reviews of any webcomics submitted to TCJ. Since then, perhaps foolishly, people have responded by sending links to webcomics of all imaginable descriptions. So here we are: the inaugural Webcomics Capsule Reviews!

A nifty little magical-realism-tinged graphic novel set in a small California college town which contains an ancient, non-functioning dimensional portal left there by a civilization that vanished in the time of the conquistadors. Three people—a professor, a student, and a young man who has a history with the professor’s family—come together through their shared obsession with the out-of-place artifact.

The premise has the vibe of early Love and Rockets, as does the quiet, meandering story, which is less about the sci-fi element than about the ways the characters deal with the puzzle it presents. Lynch’s art is, unfortunately, limited—mostly stiff, doll-like characters with dots for eyes against simple backgrounds—and not always up to the challenge of depicting the story’s unique setting. The visual storytelling gets a little more ambitious in the final chapters, as Lynch experiments with different art materials, something not enough webcartoonists bother to do. 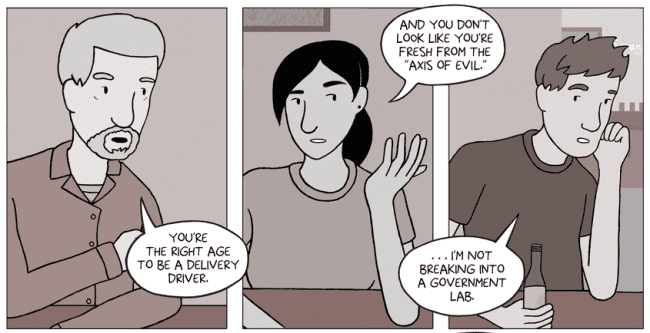 This is very much a journeyman’s piece, the work of an artist still learning how to do comics, but it comes together nicely and shows promise. Lynch completed The Relics last year, so the entire comic is available to read now.

The “Story” page provides a lengthy backstory to Gene Gardens, explaining that it takes place in a futuristic Asia where two groups are locked in battle: humans suffering from horrific spontaneous mutation thanks to generations of plastic surgery (don’t ask me, I didn’t write it), and the clones created to procreate in their place. It’d be helpful if any of this were in the comic itself, which mostly consists of interchangeable characters fighting superpowered battles for unclear reasons against dull, vague backgrounds. Cartoonists of the world: if you’re going to set your story in the future, make it a cool-looking future. It doesn’t cost extra.

Someone, sadly not me, once noted that you can identify an amateur artist because when he draws women, he puts too much work into the breasts and the lips. The women in this comic have big breasts and big lips. Also, some of them are cannibalistic strippers. It’s that kind of comic. 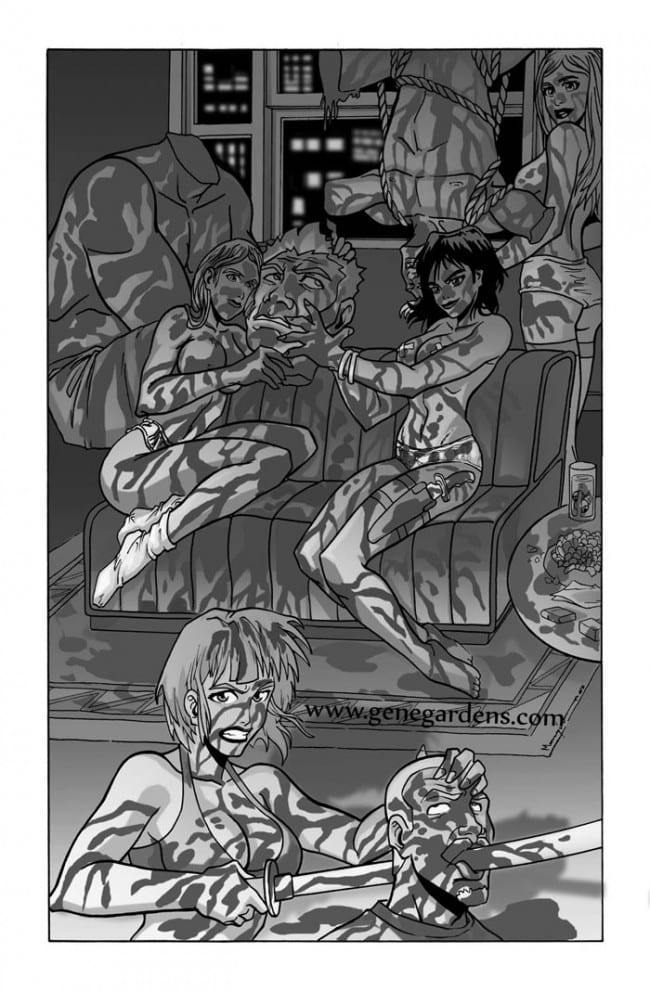 Keeping Up With Jones
Rob Campbell

Frequently-incarcerated biker Jones is, according to the front page, “a freeloadin’, cheatin’, lyin’, booze swillin’ scooter fiend of the old school variety.” The four-panel webstrip Keeping Up With Jones circles back again and again to his chief concerns: avoiding cops, acquiring bike parts, boozing, occasional desert survival, and, most important, speeding down the highway on his beloved rustbucket of a bike.

The comic has little in the way of an ongoing narrative; Campbell often abandons plot points and sometimes just reruns old strips at random. But in recent months a few ongoing threads have developed, most notably Jones’s attempt to tutor his nerdy computer-geek son (of whose existence he only recently learned) in the ways of the road.

The art is crude and sketchy to the extreme, and most of the jokes, if they’re funny at all, are only funny to bikers. But, as much as I can’t recommend Keeping Up With Jones, it gives me a warm feeling in my gut that comics like this exist. I mean, there’s a webcomic for bikers. How great is that?  Expecting it to be a good webcomic almost seems like too much.

Holy crud, webcomics like this still exist! The online comics world has advanced so far in the past decade that sometimes it seems even the least inspired webcomics have a degree of art-school polish. But it turns out there are still bad webcomics in the classic mold: cut-and-paste artwork, shakily-drawn talking heads with unchanging expressions, distracting typed fonts, and plenty of fart jokes. The first strip is the characters breaking the fourth wall to introduce the comic and the second strip is the main dude calling the main lady a hooch, and friends, that’s the way webcomics rolled back when I started in 2000.

Although the near-total lack of artwork sometimes makes it hard to tell, Superhaters is about two slacker superheroes, the robot-suit-wearing Destruct-O-Tron and the three-eyed Mind’s Eye, Mistress of Mysticism. They almost never engage in any superheroics, ostensibly because they’re too lazy to leave the house, most likely really because the artist is too lazy to draw it…wait, did they just say “Jeet jet”? Is Nick Marino from Pittsburgh? He is! He’s a fellow yinzer! Sweet!

Anyway, this is not a good webcomic, but it’s sweeter at heart than the foul-mouthed early strips indicate. And as much as I groaned at 90% of the jokes, now I’m worried about whether Destruct-O-Tron will ever get out of his ill-fated body-swap with a Spewey-like alien. You can’t just leave him like that!

In a candy-colored, anime-inspired futuristic world, German teen Steffi Frohlich, crack pilot of adorable mecha animals, acquires her very own giant robot kiwi bird and uses it to fight crime. What follows is relentless robot-fighting action leveled by the overwhelming cuteness of everything involved, from pink-haired Steffi and her lime-green Kiwibot to supporting characters like the Raccoon, a phantom thief in a raccoon suit, and the creepily cheerful robot girl 42.

If the Hitchhiker’s Guide to the Galaxy nod doesn’t clue you in to the comic’s perky geekiness, the many references to sci-fi manga artists like Shotaro Ishinomori and Masamune Shirow will. Pop music also colors the story, with chapters named after song titles and Cagle’s notes often suggesting theme music for the characters. 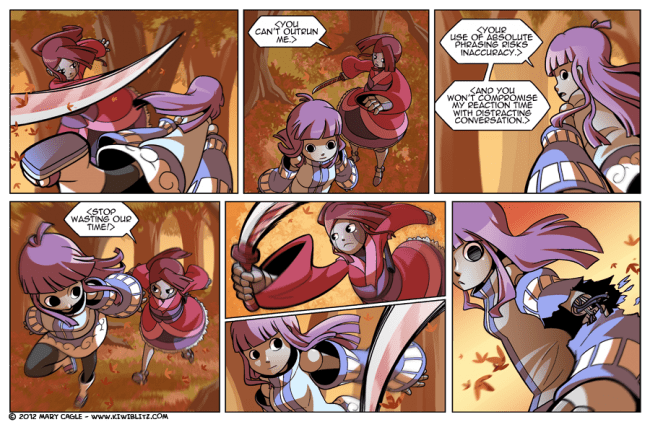 You can often judge a webcomic by the quality of guest art it attracts, and Kiwi Blitz scores top-notch quirky-fantasy talent like Kel McDonald (Sorcery 101) and Magnolia Porter (Monster Pulse). Kiwi Blitz follows a similar aesthetic: bright, clear, appealing artwork, kinetic storytelling, and a manga-inspired blend of action and character moments. It’s not the most sophisticated plot ever constructed, but, minus the occasional swear word, it could form the basis of an awesome Nickelodeon or Disney Channel cartoon. 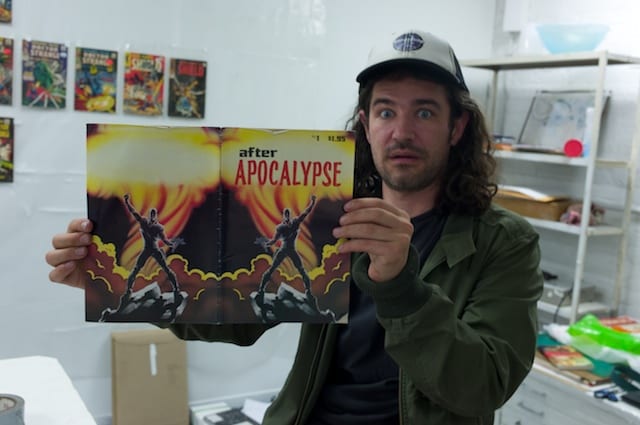 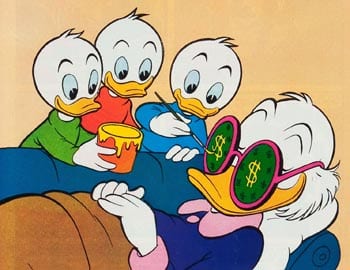