FIFFE: Let’s discuss why you hate Walt Simonson so much and why you nailed him to the wall on your blog!

LATOUR: [laughs] I did not!

FIFFE: We can agree that Simonson is just as a big of an icon as all the guys we’ve been talking about. Now on that blog post, you were constructively breaking down a Simonson Thor page, but I found it interesting how you were almost apologetic in doing so. Is that because you revere him so much?

LATOUR: Absolutely. And because I can’t imagine what it was like back then. I now have the benefit of technology to do a layout on my computer in a lot of different ways other than on the actual board. So I don’t know what the hell he had to deal with in order to meet that deadline.

FIFFE: He wrote, penciled, and mostly inked 22 pages and a cover a month for years.

LATOUR: Yeah, I’m reverent to that process. It must’ve been hell, and if stuff was a little off here and there, whatever. I mean, it’s the sum of the parts, right? A weird way to tie that to what we were talking about earlier is the sum of his Thor run is far more important than maybe a panel transition that didn’t work. That’s not to say that we shouldn’t worry about this stuff.

FIFFE: It’s not above scrutiny.

LATOUR: Exactly, and apparently he got enough shit right. But that doesn’t mean that you can’t look at that page and see what he did wrong and think, “What can I take away from it?” So I try not to write critiques very often, but I felt strongly about it as a lesson.

FIFFE: I think that kind of criticism is healthy and needed for this kind of work.

LATOUR: You were saying earlier how you don’t want to make people sacred cows. If you don’t see people as human, then their work actually becomes worse. If I saw Walt Simonson as somebody who couldn’t do anything wrong, then I’ll never give him a break. As a result, I’m gonna form a toxic relationship with his work. He’s an unbelievable artist. That page, not as great as his art in whole.

FIFFE: It’s positive to criticize this kind of work, I think, but to take it further, is it worth criticism? Meaning, the fact that it was a product of factory assembly line entertainment, should we be applying these sort of high standards of a masterpiece?

LATOUR: Well, I think both things should be criticized for what they are, but I also think that when you sign on to do big name stuff, you sign on to being in the public eye. So at the end of the day, if that comic is sitting next to a comic that took 10 years to do, your average person on the street shouldn’t be forced to understand the difference between the two.

LATOUR: It’s not fair at all. It’s not fair in any sense, but the trade off is that more people read Thor. Think of all the rewards that came from that Thor run. He deserved all that acclaim, but if he’d done that as something not Thor, it’s an uphill battle. So I think the trade-off is that you have the brand of Thor on your side. But listen, that can be a cross to bear, too. I never met Simonson, but I doubt that dude’s skin is very thin. He didn’t get to be who he is by listening to what people have to say about him. Nobody that has a consistently good career ever completely buys into their own legend. But, yeah, I dunno… that’s a tough question.

FIFFE: The other thing I wanted to address was what you said about these storytelling issues in that same Simonson post: “As modern comics move away from such considerations and lessons we will continue to lose more and more of our center.”

LATOUR: What I meant is like what you said about it being a factory, assembly line kind of comic thing. I understand that in some ways it’s good for comics but I think what happens is like what I said about reference. To get reference you had to walk 10 miles. To get a page lettered you had to ship it to a letterer and get it done by hand. Each step that it took, the person doing it had time to consider something. And everything is so lighting fast now that I think people have lost, to some extent, their center.

LATOUR: Right, because people don’t or can’t step back very often. That’s a broad statement, but I feel that sometimes people don’t ever step back to see what they’re doing. There’s less incentive to step back because they want to get it out the door. You want to get it in the hands of people, you want to get paid, you get excited about what you’re doing, you want people to see the work, you want to contribute to the culture of it sometimes. So it’s not always about paychecks, but no matter what the reason, people want results now. I think that makes the creators move as fast as possible. I’m not saying it should take people 400 years to do a story. There’s something about having a burr under your saddle that deadlines provide, but at the same time it’s essential to step back from time to time.

FIFFE: Okay, but your main concern is that our center, our storytelling core, is at risk. Don’t you think that’s always been at risk? Great storytelling has never been the thing that has been kept comics afloat.

LATOUR: No, probably not. Well, actually—that’s an interesting point. For the sake of argument, think about how there are maybe ten great Batman stories and what those ten great Batman stories have done for comics in general. Maybe it doesn’t sustain the industry on a day-to-day basis, but good storytelling sustains it over the span of several years. There’s the idea that something has to hold people’s attention, even if storytelling or the aspiration to do great work. The Dark Knight Returns comes out and makes such a mark that people chase the dragon looking for the next Dark Knight. They buy years of comics just looking for that feeling. Those two things kinda work hand in hand. In fact, you might not think a Batman story like Dark Knight was great unless you’d sludged through some terrible ones. [laughter]

FIFFE: The reason I brought it up is because you had this concerned tone in your post, as if we were losing this center. I thought you were worried about losing something that was never really there. I don’t think that the primary concern of editors and fans is great storytelling.

LATOUR: I think it is.

FIFFE: I think only cartoonists care about this stuff. In that same post, you wrote that good storytelling is important to everyone “from the most pretentious arteest to the most cold, hard, numbers minded businessman”, but I don’t believe that’s the case.

LATOUR: Here’s the thing. I think most people working in comics, especially the mainstream, really do love what they do and they want to do good things. What happens is that it’s commerce, it’s a job. People go in with the best intentions but at the end of the day you have to pick what you can fight for and what you can’t. And it’s up to the readers, the consumers to some extent, to vote with their wallets. From time to time, something that’s mostly considered universally good work gets done. I think that speaks to how much some of these people working at these companies actually do care, that those things actually do get made. They could just be in the widget business, and you can probably say that they are, but…

FIFFE: [laughter] You can.

LATOUR: But there’s enough evidence to point that these people love comics. You can argue subjectively about what’s good or bad but there’s enough stuff to make the argument that they’re not solely in the widget business. I read this P.T. Anderson quote where he said something to this effect: “I don’t make the studio much money but I give them what they need. They need acclaim, they need some sort of esteem so they can brand their movies as ‘the company that brought you blank.’” So I think storytelling is the backbone of comics in that same way. What I fear is that as things move faster and faster, we’re gonna lose that. I’m not making the argument that it’s always been great. I’m making the argument that it’s already hard enough to do it, and somehow it’s an upstream battle and I’m worried that the process is gonna turn the faucet up on the stream.

FIFFE: So you think it’s going to get worse?

LATOUR: That’s where indie comics have the leg up, because they sort of function in the same way old comics do. There’s a greater opportunity for innovation and advancement because it’s to some degree outside of the dual concerns of storytelling and IP. But people who think that indie and mainstream comics don’t feed each other are crazy. I think that there are just as many mainstream guys that love indie stuff as the other way around. And the two can learn a lot from each other. For a while there was a weird “us versus them” vibe. It’s weird that now that mainstream comics are backed by corporations, there’s less animosity, despite the fact that it’s bigger business. I think it just shows how much we all want to survive making comics. We want comics to survive. 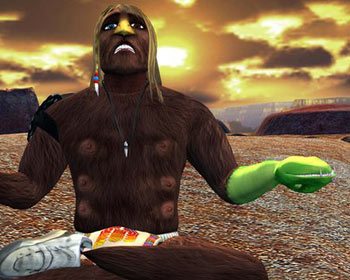 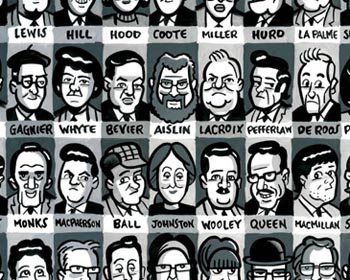