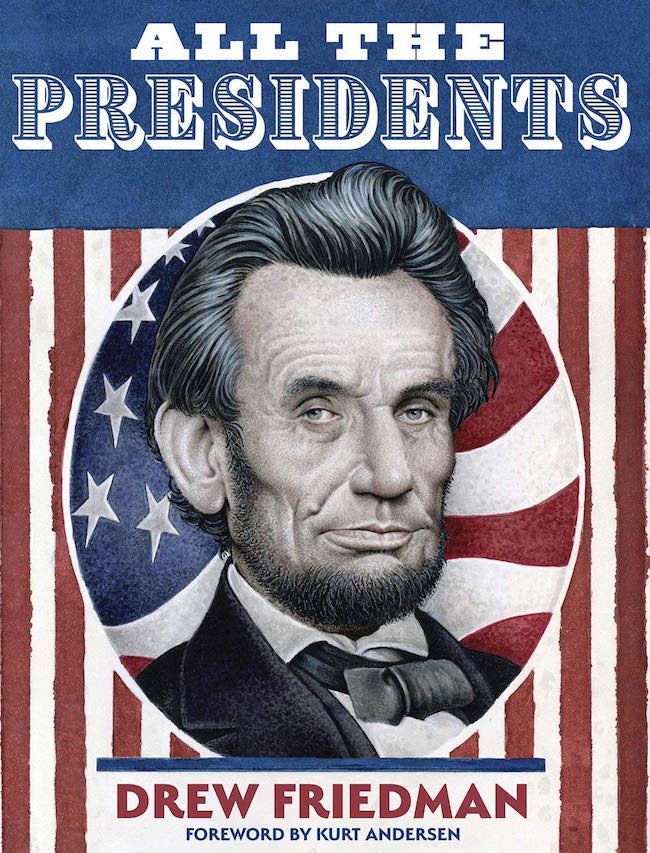 Drew Friedman is a landscape artist of the human face. I have no doubt that if a particular butterfly had failed to flap its wings in Eltingville in 1982 and popular culture had taken an ever so slightly different turn with James Warren’s Famous Monsters of Filmland managing to hang on a few more years, Drew would have been there, checking that coveted venue off his childhood bucket list with a pore-by-pore cover or two of Tor Johnson’s map. His latest book, All the Presidents, may be the closest we’ll get to see to of that kind of dream gig. The conventionally framed monochrome portraits of those 45 old white men are simultaneously familiar and unfamiliar, many disturbing if not downright chilling. All the Presidents is a book that could just as easily have been titled Famous Monsters of Washingtonland. “Monsters to be pitied, monsters to be despised”, these portraits invite us to shudder, flinch and commiserate in their subject’s sinister, sorry lot.

Drew Friedman: Shemp is currently entombed in a crypt at the Home of Peace Memorial Park and Mortuary in East Los Angeles. Harry Einstein, aka Parkyakarkus, is entombed just above him, for all eternity. 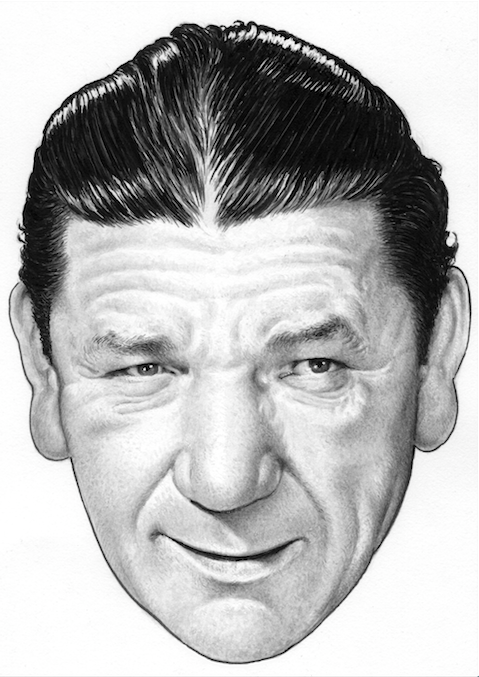 Why U.S. presidents and not U.S. elevator men?

Sadly, U.S. elevator men no longer exist. I predicted that inevitability back in a 1982 Weirdo magazine. Sadly, U.S. presidents still do exist.

Who is this book aimed at?

When I began working on this book I actually didn’t know what a lot of these men looked like, or, I had forgotten since collecting the Topps U.S. Presidents cards back in the early seventies when I was a kid. I’m not Doris Kearns Goodwin, I was learning along the way. So hopefully: like-minded people who are curious about seeing un-glamorized, non-homogenized, warts and all portraits of all the United States presidents.

That series also featured the current candidates if I recall (I still have my well-thumbed Shirley Chisholm). Were you tempted to go that route?

Wow. I’ll trade you my Edmund Muskie for your Shirley Chisholm? If the book had been scheduled to come out during a presidential election year I would have considered it, but it would then wind up becoming dated pretty quickly.

An acquaintance of ours revealed that his six-year-old daughter was “really obsessed” with this book. Theories?

That’s nice to know. It’s always refreshing when you meet tots who aren’t just interested with what’s going on in the current moment but have a curiosity about the past. A couple of years ago I met a teenager who was obsessed with learning all about Soupy Sales and Bert Lahr. That was really encouraging. 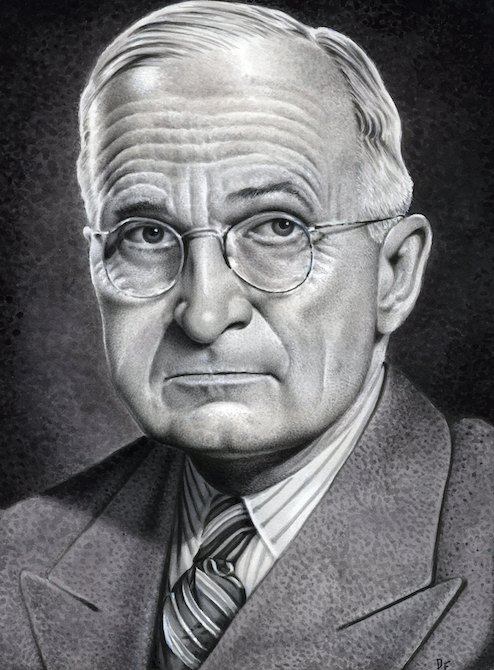 What is it about faces, anyway?

The thing is, faces are nothing special, nothing unique, as far as I know everyone has one, everyone who has ever lived. Most are routine, uninteresting, the same formation… eyes, nose, mouth, ears, chin, etc. placed in the same place, more or less. It’s the occasional distinctive face that jumps out to me, especially if they contain wrinkles, jowls, baggy eyes, liver spots, neck waddles, crinkles, furrows and creases that I’ll take the time to render, be it a New York elevator man, a forgotten comic book artist, an old Jewish comedian or a United States President.

No difference. Each of their mugs is a thing of beauty to me.

You stuck to a conventional portrait format for this book- no arms, legs, torsos or background details. Why?

I wanted this particular book to be as close to traditional portraiture as possible, heads and shoulders, more or less based on the old posed paintings, etchings and photographs of the early presidents.  I didn’t want to distract or editorialize like the old Topps cards did with corny or predictable backgrounds like the front of the white house,  the oval office or Gettysburg. The only exception is the cover image of Lincoln with the flag behind him. Flags, and swastikas, are always effective on book covers. 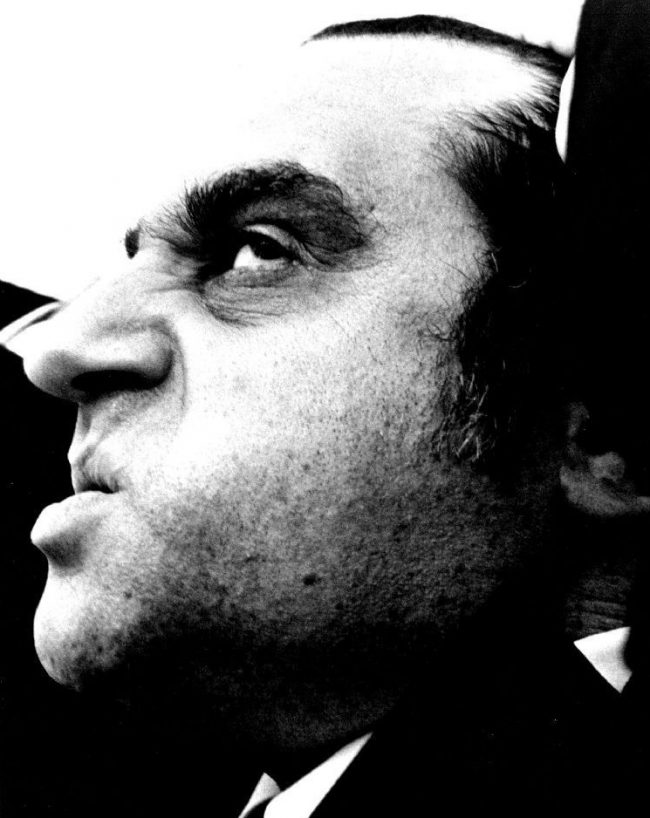 So I’ve been told. Did you discover any commonality to this particular group of human faces besides their owner’s brief, temporary government jobs?

Not really, aside from, with one exception, all of them being middle aged or old white men, and that they all belong to that most exclusive of all clubs, just 45 members in the last 250 years or so.

Who was the ugliest US president?

Hard to say, ugly is subjective. A lot of these guys wouldn’t win any beauty pageants, that’s for sure. For my money I’d say Millard Fillmore, which is ironic because he’s also been referred to as the worst president in US history…that is until now. A side note: ideal casting for a Millard Fillmore film bio = Alec Baldwin.

Who was the most dashing US president?

Thomas Jefferson might qualify, tall, regal, also Franklin Pierce, who was considered the first good-looking, boyish president. But to my mind, James K. Polk, who looked like Boris Karloff. 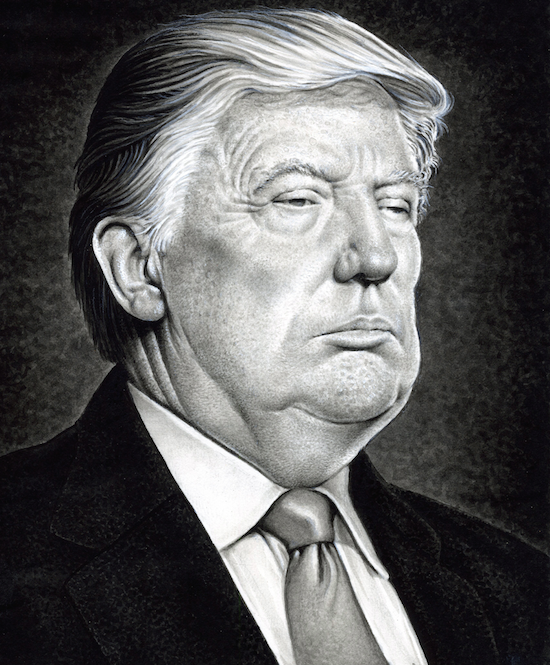 Who was the most horrifying US president?

If you mean is, need you ask?

Who was the most Old Jewish president?

Lincoln, he was shot in the temple! Rimshot! Sorry.

Shemp’s head appeared in my last book Chosen People 383 times, I’ve counted, mainly his head repeated in the endpapers, the uncontested all-time record for Shemp appearances in one book. So I felt I should give him a rest this time around.

Did you listen to any special presidential mood music while painting these guys?

When I work, I mainly listen to NPR radio, where I get all my unavoidable Trump updates. But I did play several presidential comedy albums as I was working on some of the drawings for inspiration, including Vaughn Meader’s JFK comedy album First Family, which doesn’t hold up very well, and David Frye’s Nixon comedy albums, which actually do still hold up well, 45 years later. Frye’s Nixon impression was so devastatingly good, it was as if Nixon himself was recording the albums.

Were there any presidents that you had a particularly difficult time with?

The aforementioned Millard Fillmore. I actually drew four tight pencil sketches of him before I settled on the one I used. I think, knowing his legacy as the worst US president and that he was certainly no beauty, I went a bit too far with a grotesque likeness in my first attempts. My intention was not to overtly editorialize when I was drawing these portraits, even if it was someone I particularly disliked. I think Jake Tapper kind of sums it up in his back cover blurb, that I both humanize and satirize every U.S. president.

What president’s face had the most lines and wrinkles?

No question, Zachary Taylor, followed by Ronald Reagan. When Richard Pryor was introduced to Ronald Reagan at a Washington function circa 1980, he later reminisced that Reagan’s head looked like a shriveled penis.

What president’s facial hair was the most unruly?

In keeping with the fashion of the times, starting with Lincoln’s lion’s mane and ending with Benjamin Harrison’s full beard, the presidents all sported facial hair (aside from Andrew Johnson, who by the way, looked just like Tommy Lee Jones), beards, mustaches, sideburns, mutton chop sideburns, pork chop sideburns, nose and ear hairs, some more unruly than others. Ulysses S. Grant’s beard might take the prize for that era. But Donald J. Trump wins. Whatever that ‘hair” is atop that orange-hued head is in an orbit of it’s own.

Which president was the snappiest dresser?

Hands down Gerald Ford. The first president to don a leisure suit. 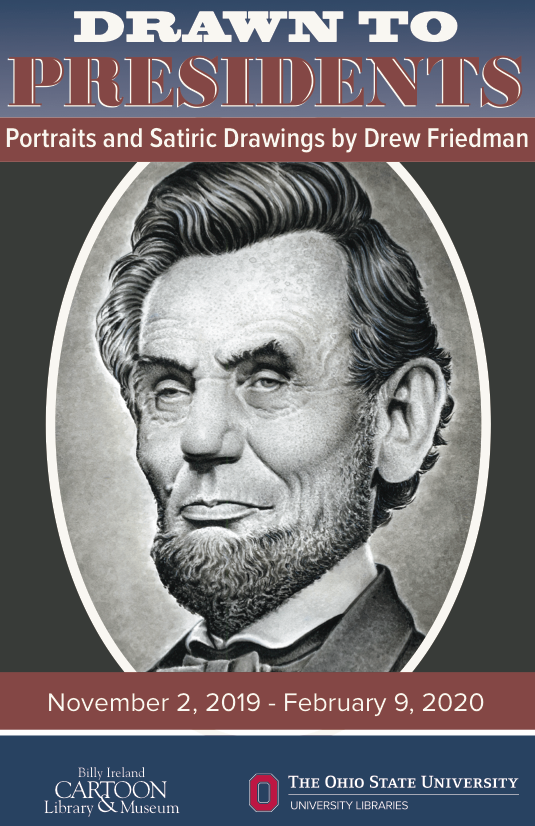 These portraits all seem to exist on a sliding scale of comatose, sober, miserable and pissed - except for 3 happy guys: Warren G. Harding, Eisenhower and Reagan. What’s their secret?

It wasn’t planned that way, but yeah, most of them look pretty miserable and unhappy in the old portraits and photos, at least while while they served in the oval office, almost like “oh shit, what have I gotten myself into?” is stamped on their faces. Reagan on the other hand always looked pretty happy and peppy, just another acting gig where he just needed to memorize your lines. Btw, our mutual Plonsky pal John Wendler pointed out that my Reagan portrait looks like game show host Dennis James.

Did you create the portraits in order? If not, who came first? Who did you save for dessert?

I didn’t draw them chronologically, I jumped around. The first one I drew was Abe Lincoln. Another artist had posted their portrait of Lincoln on Facebook (which I thought was good, not great) but it reminded me I’d never drawn Lincoln before, one of the most iconic faces in history. After I drew my Lincoln portrait and posted it, the comments were positive so I was inspired to draw a few more (presidents) and realized I had the makings of a new book. And, let me point out, a book of portraits with no Jews, just to prove I could do it.  As I point out in a recent blog post about drawing Trump for the book, I saved him for last, mainly because I was sure how to approach him. I drew some initial Trump sketches which I rejected for various reasons, maybe they were a bit over the top, so I went with a more dark, subdued approach, reflecting his inner soul rather than a goofy, distorted Trump expression.

There aren’t many presidents in this book that make eye contact with the viewer- but the few that do are particularly disturbing.  How were these kind of choices made?

That wasn’t pre-planned. Just mixing things up, some looking off to the side, some making eye contact. I did want George Washington to be making eye contact though, since he’s the first one up in the portrait gallery, the welcoming committee.

Were you ever tempted to just draw the back of their heads?

What did you learn in the making of this book?

I learned that I miss drawing old Jews.

What didn’t you learn in the making of this book?

If looks alone determined our next president, who would like to see in the White House?

Bernie Sanders. I’m voting for him mainly for selfish reasons, he’s the candidate I most want to draw, an old Jewish comedian in the white house. 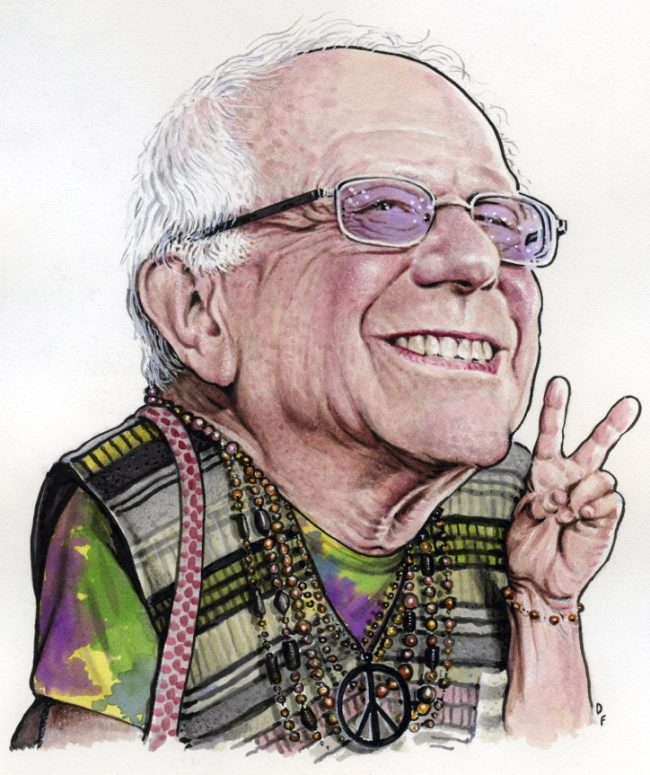 Up in Heaven, with uncle Mortimer.

Coming up is a big exhibit at the Billy Ireland museum in Columbus, Ohio featuring all of the original art created for All the Presidents as well as presidential-themed drawings I’ve created over the years for various publications, from Mad to the New Yorker, and, presidential ephemera from my collection including books, records, magazines, comics, trading cards.

The show opens on Nov 2nd, and the opening reception is Sat, November 16th, when I’ll also be doing a talk with illustrator C.F. Payne.

Mark Newgarden is a cartoonist and co-author (with Paul Karasik) of the Eisner-winning How To Read Nancy. He teaches at the Pratt Institute in Brooklyn and the Parsons School of Design in Manhattan. He has been discussing the location of Shemp with Drew Friedman since 1978. 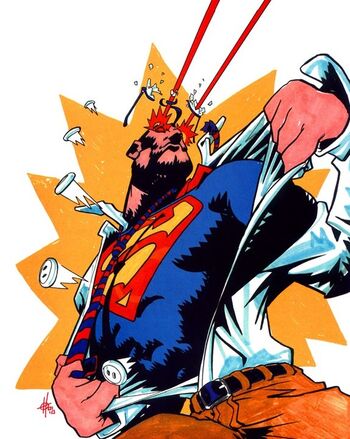 Are You Not Entertained? Tegan Enters The DC Universe 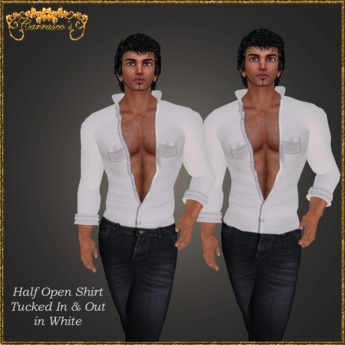 Running on Fumes, Walking on Coals (This Week’s Links)