A year and a half after encountering the art of Uno Moralez for the first time, I still have a hard time believing it actually exists. Moralez is one of a handful of cartoonists—Jonny Negron, Julia Gfrörer, Josh Simmons, Michael DeForge—whose work hits me so hard it's like they're making it just for me. But the rest of them are all people you can friend on Facebook, follow on Tumblr or Twitter, buy minicomics from, and have drinks with at a con. Moralez is a Russian enigma whose LiveJournal is written in Cyrllic, whose work is both drawn and published in digital pixels, whose output comes in the form of bizarre and ferociously NSFW image/gif galleries as often as comics or illustrations, and whose name is not even Uno Moralez. Before I conducted this interview with him you could easily have convinced me he was an elaborate hoax.

Moralez's genius, and I don't mind using that word in his case, evidences itself in how his work reads like a Serpentor-style amalgam created using the combined DNA of Suehiro Maruo, Nicholas Gurewitch, David Lynch, Andrei Rublev, and the evil videotape from The Ring. Unquestionably menacing and monstrous figures lurk smiling in shadowy rooms, bodies and objects arranged in inscrutable ways that nevertheless imply an unimpeachable in-story logic. It's the logic of nightmares, yes, but whether we're talking about his standalone images, his animated gifs, or his keyframe-style comics, they give off the sense that what's happening makes sense to the individuals involved, which is the most fascinating and harrowing thing about Moralez's work. The distance from here to there seems insurmountable, but he bridges it time and time again, in a lo-fi digital style that makes it seem like these images are woven from the fabric of the Internet itself.

I was beyond pleased to pierce the mystery and speak with the pseudonymous artist and cartoonist in his first English-language interview. In retrospect I wish I'd coaxed more out of him regarding his future plans—he said simply that he hopes to make animated films, either independently or in a studio framework. Then again, perhaps the way I've experienced each new Moralez image or comic or gallery—as a surprise transmission from Another Place—is the best way to do so.

Many thanks to this interview's translator, Ray Garraty, for his help. 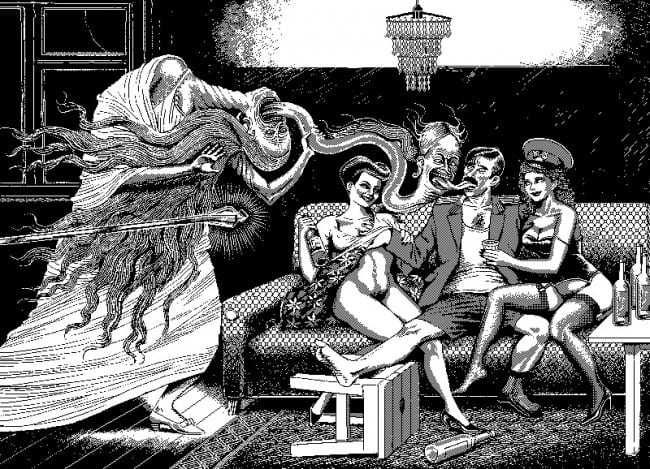 Sean T. Collins: I know nothing about your background, Uno.

Uno Moralez: I was born and grew up in Bashkortostan; it's a republic in the Russian Federation. Ancestors of people who live there now jumped out of the earth. I'm 44 years old, and I've lived in Moscow for ten years now, with my wife and a cat who is surprisingly similar to a human. I work as a freelance artist, draw art for commercials, sometimes for movies. This kind of work pays the rent and it has nothing in common with my art practices.

I used to draw in childhood. In my family, all my relatives have talent for drawing, but nobody has made art professionally. I didn't even consider that I could study it and get an education in that area. In the late '90s I was interested in video, and at that time I started to develop and apply skills in digital media, where drawing was also necessary. As a result, drawing became my primary activity. Later, in 2007, I began to draw my pixel paintings.

Collins: I'm curious about your personal history with comics. What are your comic influences, in particular? Did you read comics as a child? Who do you read now?

Moralez: When I was a child, Russia was behind the Iron Curtain, and everything that was foreign was unusual. I had a few issues of action Marvel comics and I liked to just thumb through them, and later tried to imitate their style. I don't think they helped me to form as an artist, though I still use the skills I imitated at my job. I stopped reading fiction a long time ago; now I mostly read translations of ancient mystical books. It's quite entertaining and expands my imagination and makes it multidimensional. Sometimes I also read some weird stuff on the Internet.

Collins: You frequently assemble galleries of that weird stuff -- images and gifs that you find online and edit together in massive posts. I am a HUGE fan of those posts, which are a lot of fun to look at, but which also seem to have much in common with your actual art and comics. They're creepy, they're kinky, they're funny, they often sparkle. Is there a similar thought process for you when making those galleries and when making your own art?

Moralez: My thought process is always the same when I try to express my view on the reality around us. This visual range reflects the course of our daily lives—strange and crazy.

Collins: If comics weren't a big influence on you, what is?

Moralez: I have a closet where I keep all stuff I like—music, cinema, works of artists I love or even don't know—but all that doesn't affect my inspiration directly. I draw my own visions. Part of them I see in my dreams. Part of them I see when I'm awake; maybe they're also from night dreams, like memories. And if somebody finds someone's influences in my work, he's probably right. We all are made of the same parts.

Collins: One of my favorite things about your work is the way it blends imagery from different cultures into something new and challenging. I can see the influence of Soviet art and traditional iconography, but also manga, the imagery of David Lynch...

Moralez: Yes, quite so. It's what I told you about. Those are some of the parts I'm made of for today, and it flows naturally into the images in [my] pictures. Images of Soviet Russia were sort of imprinted on me from my childhood, when our impressions are the brightest and memory is tenacious. The Japanese are somewhat close to our Soviet culture, probably because of the common denominator in the social structure. I like Lynch's films very much for their romanticism and mystery.

Collins: I would describe your work as horror. Do you?

Moralez: I don't think my drawings are frightening. I like to think they are mysterious.

Collins: I'll agree to the second part of that response. Your drawings are mysterious, since they are both complex and specific in a way that invites us to imagine how the characters and creatures in them got to that point. For example, your recent comic about the small man who steals a jewel from a sleeping woman's forehead ends with an image of his jewel collection – it seems this is something he has done many times before, and we are left to fill in the blanks. Do you consider the story behind the images when you make them?

Moralez: My short stories derive from images which don't fit in a one single image, plotwise. This is not exactly a comic, that's why I draw only key scenes leaving out details. And then reader's imagination starts to work. That is important.

Collins: You started doing pixel art in 2007. Why the switch? Or did you ever do much drawing using traditional media?

Moralez: Around that time there was kind of pause, and I felt that I could show something about "inside" me with drawings. I'd chosen pixel art almost immediately, probably because I consider it as the most suitable technique for my stories. I also use traditional media, and with quite some confidence.

Collins: Since you're drawing digitally and publishing primarily through the digital medium of the web, I find your work more frightening than I would if it were in print. It feels like the horrors you depict in your illustrations and comics are a part of the web itself -- like they've infected the page on which they are hosted. Do you feel publishing on the web gives your work any advantages it would not have in print?

Moralez: It's an interesting point of view. If you start to think, "What is the Internet?", pretty horrible thoughts can get into your head. I see the Web as an electronic prosthesis which replaces the mental link between people on the planet. But the thought of the Internet having an autonomous mind warms my imagination.

Actually, I publish my work on the web because it looks like it was planned and created there—in its original form, in other words. Furthermore, it's available for maximum number of people.

Those are just my thoughts. Maybe the Internet Mind will just laugh at me.

Collins: Why do you include animated gifs in your comics? What do gifs allow you to do that you couldn't do with either traditional comics or illustrations or full animation?

Moralez: Gif animation is fun, it is concise and expressive. How can it be ignored? I try to use it with the measure and use it as needed.

Collins: I discovered your work through other North American comics people early last year. When did you first notice that your work had caught on with American readers?

Moralez: On the web everything happens quickly. And Americans are quite an open nation—right away, they began to express their emotions by writing letters to me. My compatriots will monitor a stranger's success with silent dignity; it's our severe national trait. I receive e-mails from all over the world, but the bulk of them are from Americans.

Collins: Earlier you avoided the comparison to horror -- what about erotica? If you're drawing images from your dreams, as you said, does that explain the presence of the sexual material in your work?

Passion is a fire. This symbol seems very suitable for passion, and I use it very often myself. 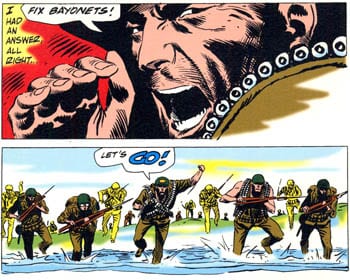 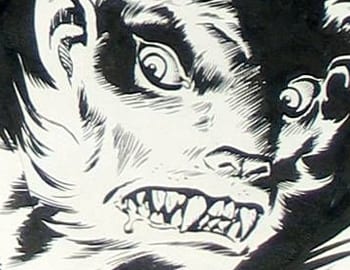