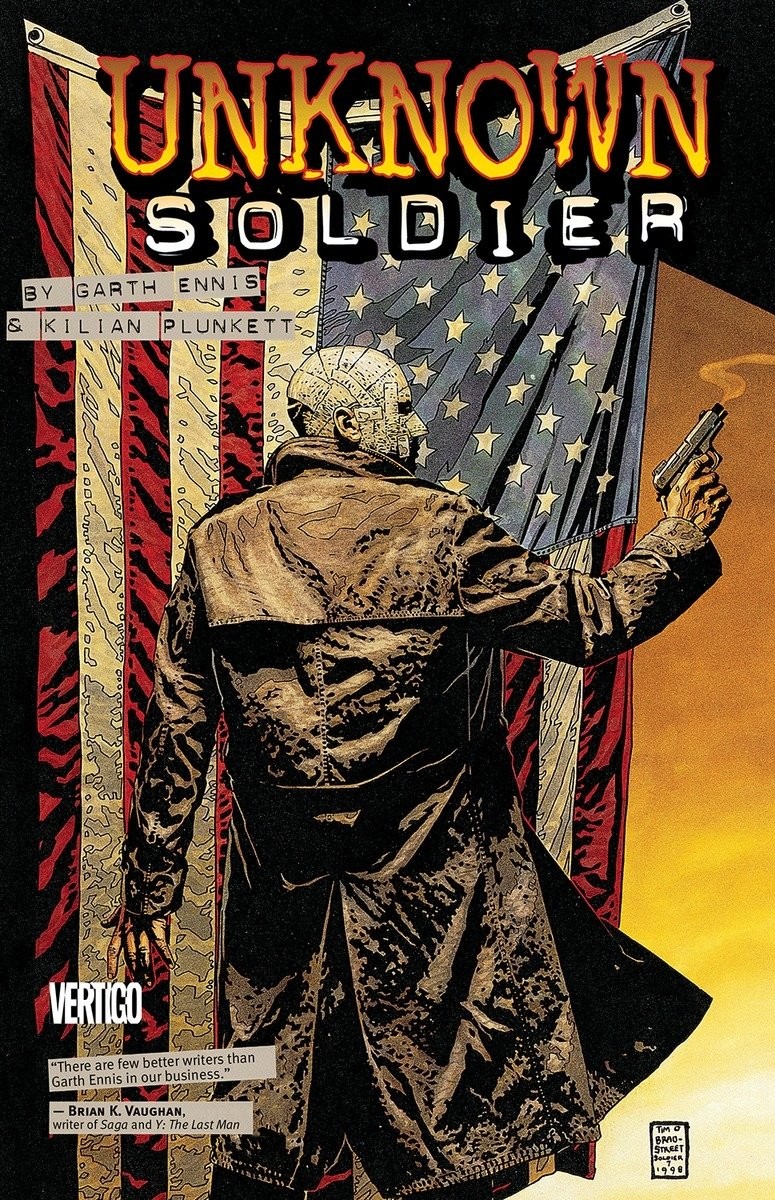 Unknown Soldier is a four issue miniseries written by Garth Ennis, drawn by Killian Plunkett, colored by James Sinclair and lettered by the (great) Ellie DeVille. A re-invention of a classic DC property, one of Robert Kanigher and Joe Kubert’s endless supply of G.I’s, this one a soldier who is a master of disguise that could be inserted into every theatre of WWII. This 90s mini-series, focusing on a CIA agent named Clyde as he investigates a trail of bodies leading to an agency boogeyman codenamed ‘Unknown Soldier’ and a secret history of American atrocities, came and went without making much an impression,  despite 1997 being the height of Ennis’ fame as the enfant terrible of the British Invasion. This is a damn shame, considering it’s one of the best thing Ennis ever wrote.

It’s far from perfect. The coloring has tendency for the infamous ‘Vertigo browns’ mode which drapes the art in murk. Plunkett is an able artist who can do running and shooting and has a decent character acting game, but he fails to knock the readers off their feet. The horrors of war he draws are always a bit too tame (where’s Garth's collaborator Jacen Burrows when you need him?), and Plunkett's action is never exciting enough. Then, there is Ennis himself, wearing his heart on his sleeve and in a full ‘historical lecture’ mode. Hey, it’s his best mode – from his War Stories to Fury: My War Gone Bye.

In many ways Unknown Soldier serves as a prototype for My War Gone Bye. Both are based on a classic character, both make that character functionally immortal without admitting to anything supernatural, and both use that immortality to explore the long and convoluted history of post-World War II ‘global outreach’ efforts by the United States. It's a choice that provides for a good share of the red in the ol’ red, white and blue. In My War Gone Bye we see everything from Nick Fury’s point of view in a manner that is meant to demystify the character (even if Ennis can’t quite let go of warrior worship), while in Unknown Soldier we get an outside look at the figure, keeping it mythical; but I’m talking ‘mythical’ like the Titans – terrible and frightening. 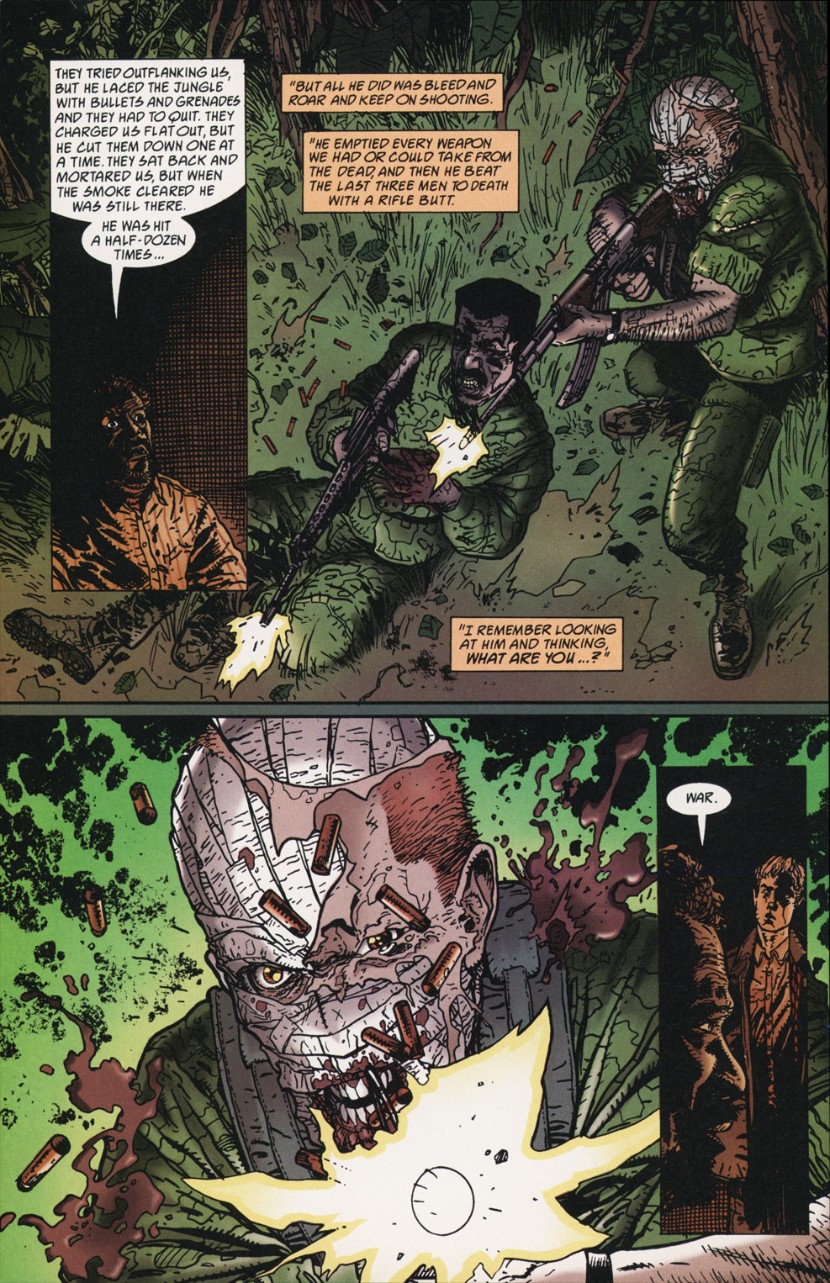 There’s one really great page in issue #3, in which Plunkett gets to draw the Unknown Soldier bugging out as he mows down dozens of enemies. It’s just the right mix between the classic Joe Kubert version, too Hollywood to be close to truth but so exciting you forgive it, and the modern gritty take. It would be easy to make this into the ‘cool badass’ moment – sure, this guy just murdered a hospital but now his squad is in trouble and he’s giving it is all! Except the comics keeps him scary, they treat him as a monster. Richard Slotkin writes about this kind of choice in his study of American depictions of violence, Gunfighter Nation: in war movies the ‘dirty war’ is framed as necessary evil that is always the result of something the other side forced, giving the audience the illusion of self-reflection while securing their tolerance for the necessity of violent acts.

In issue #1 we a get a glimpse, a testimony, about how this soldier became what he is: right at the end of WWII, visiting Dachau and witnessing the atrocities of Nazi regime firsthand. His response is not simply to be disgusted by the cruelty but to draw a particular moral lesson “If this is what our enemies do – if this is what America must fight – then we are always right! And anything we do is right.” It isn’t subtle, but Ennis is not wrong here. The framing of World War II as the ‘good war’ helps self-justify the eternal war machine in the minds of the American public (who were only happy to oblige). Dare you question the same people that stormed Normandy and freed the concentration camps? Whose side are you on anyway?! 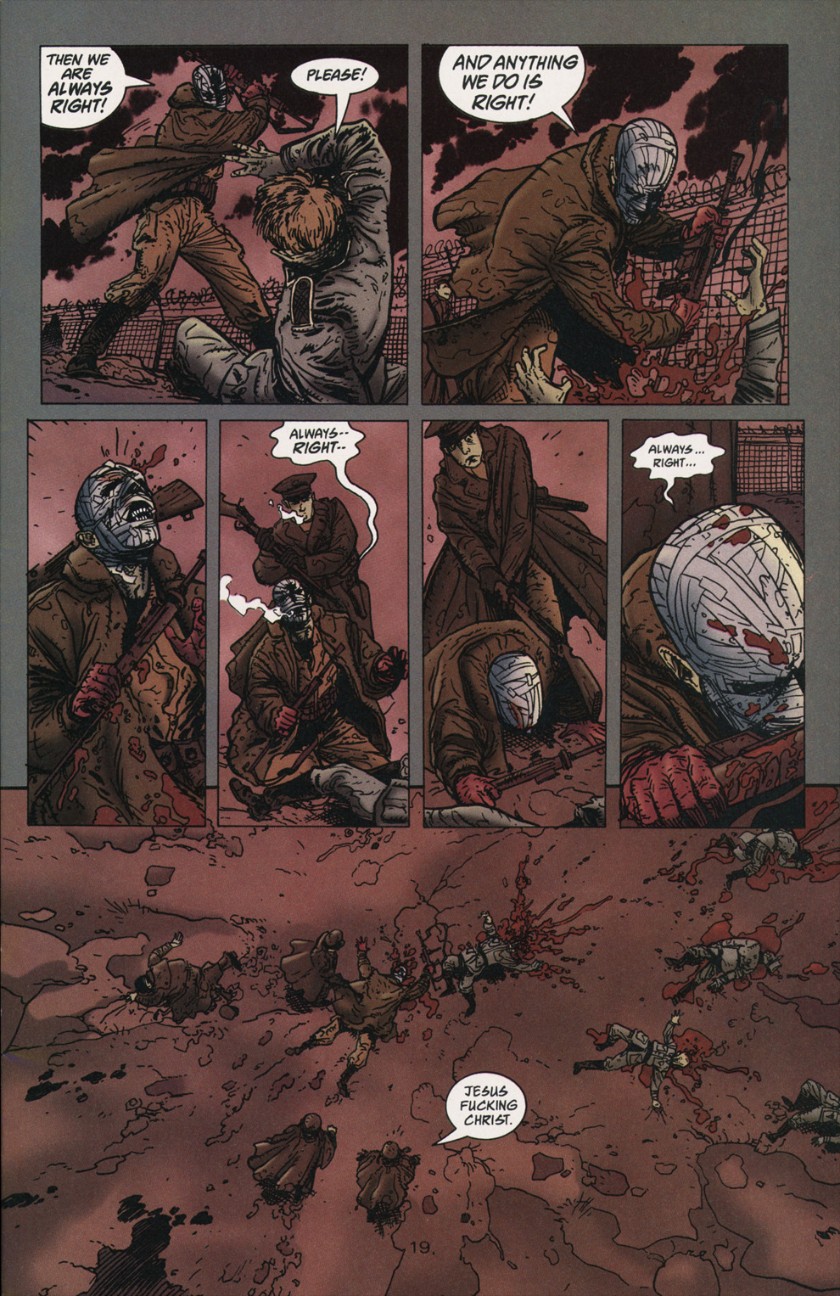 This, I should point, is not unique to the USA. In Israel, during every Holocaust Remembrance Day, we say ‘never again.’ While the phrase might have been meant as a generic resistance to all forms of genocide it came to mean something else here – ‘never again to us.’ The Holocaust became a form of moral license, with every possible threat being painted by politicians as a second Holocaust in the making, which justifies whatever actions needed. Everything we do is right. I am sure other countries have their own version as well.

While doing this Ennis also finds time to poke fun (even unknowingly) at his own foibles: Clyde’s endless crusade is mostly brought about by the death of a co-worker, a woman he hardly talked to that took a bullet by mistake. Constantly haunted by her ghost Clyde builds her into this idol of perfection, a fact she calls him out on. Ennis’ writing of female characters have always felt like he’s trying too hard, knowing his natural tendencies to be a Sam Peckinpah and fighting it all the way down. Here, it's not just a writer poking fun at himself, it’s Ennis setting up a warm counter to all the cold men in the series – smug in their cynical knowledge of how the world ‘really is.’ 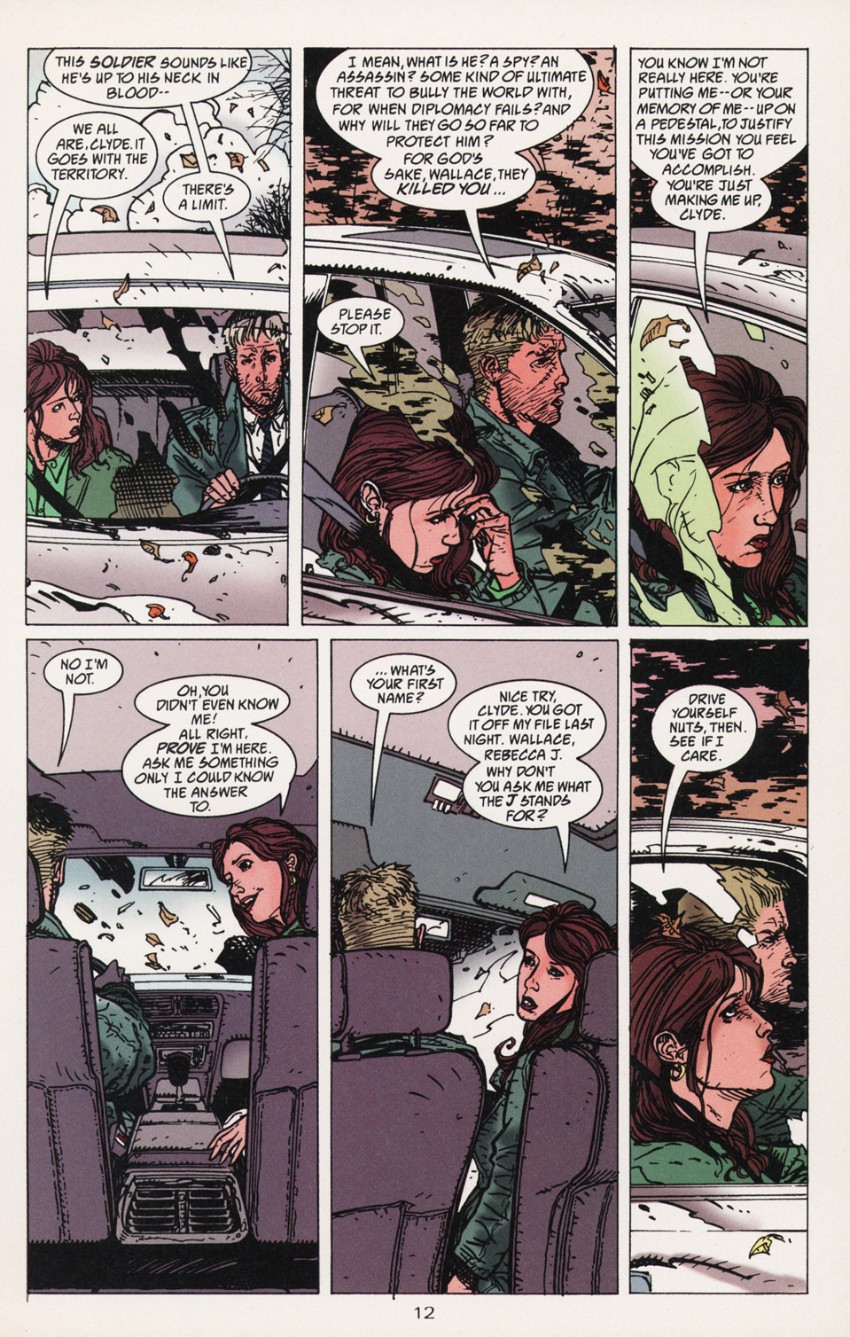 Even harder to find than the Ennis / Plunkett series was a 1988 reinvention of the same concept by Christopher Priest (then James Owsley) and Phil Gascoine. I do not think it was ever reprinted and I only read a couple of issues of that series. As befitting Christopher Priest it was truly cynical in its outlook: The Unknown Soldier wasn’t corrupted, he was always the same knowing operator whose legend is built on a pile of lies (and corpses). For Priest the world is terrible and you must accept it and be terrible to survive (which you can do without becoming a monster). Ennis’ version poses that giving in to that cynicism is the first step in becoming a monster. Agent Clyde is not naïve, he knows well and true what the USA has done in the name of national security; but he refuses to become jaded by that knowledge. When Clyde finally meets the Unknown Soldier, this old man who had seen and done everything, who then asks him make the same final plunge into fanaticism, Clyde refuses him.

There’s this famous misquote “We sleep safely in our beds because rough men stand ready in the night to visit violence on those who would harm us” (oft attributed to Churchill or Orwell) which you can hear from the selfsame cynical types, used against the pacifist or the idealist. The people thinking in such manner never question the origins of said violence. They take it for granted that was always there, as natural as the tides and the rising of the sun. What Unknown Soldier recognizes is that this perception is, by itself, a form of naiveté, a refusal to look inwards into the engine that perpetuates that violence. 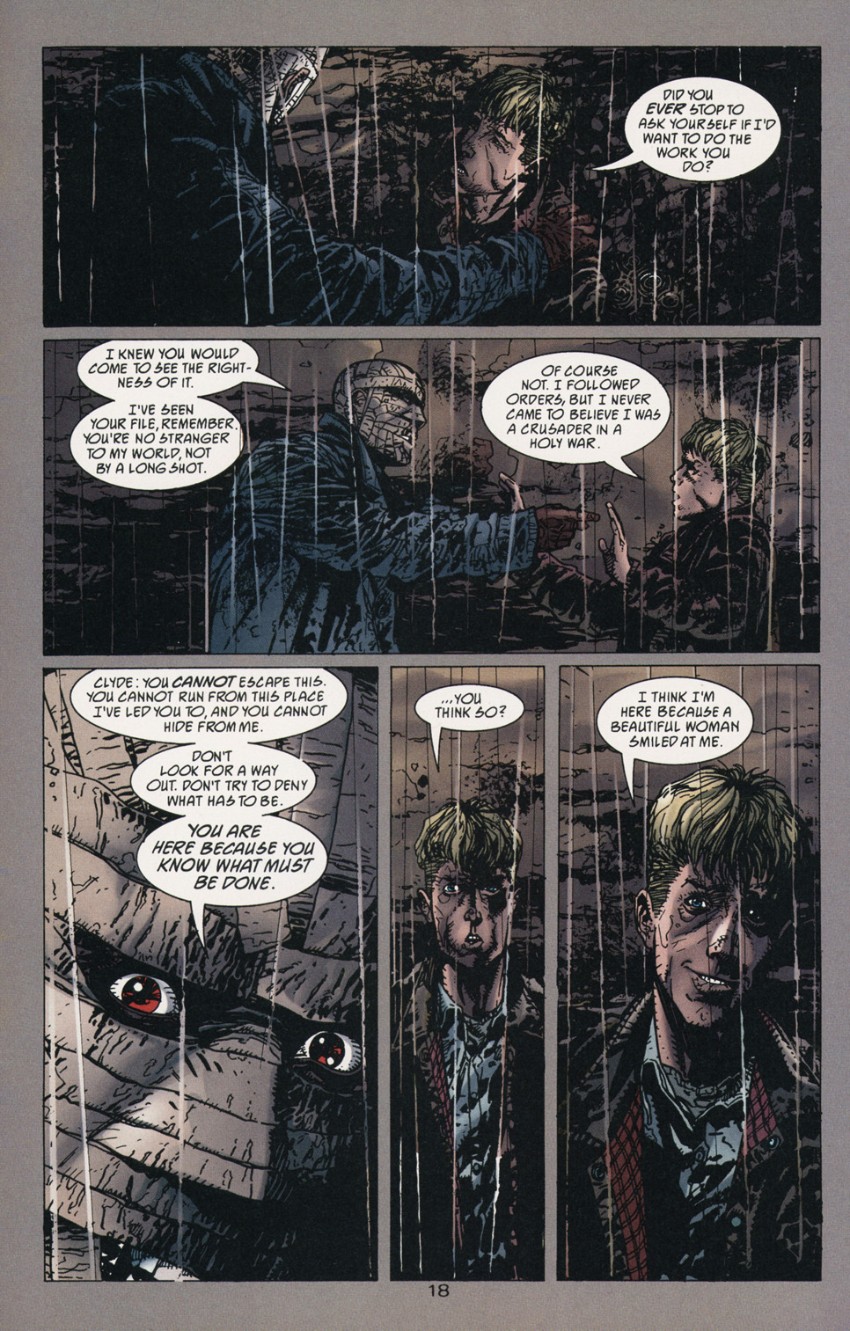 It doesn’t take much to realize that the Unknown Soldier is the one feeding Clyde hints, stringing him along; trying to mold him into his replacement. Yet this process is intentionally limited. Clyde is not meant to learn the whole truth, just the portions that would make him believe that ‘rough men are always necessary.’ Which is certainly a lesson you could take from other Garth Ennis comics. Only the comics refuses to accept this notion, digging deeper, beyond the cynicism.

I recall Slavoj Zizek’s response to Donald Rumsfeld’s famous ‘Known Unknowns’ speech, noting that Secretary of Defense missed one category: “the Abu Ghraib scandal shows that the main dangers lie in the "unknown knowns"—the disavowed beliefs, suppositions and obscene practices we pretend not to know about, even though they form the background of our public values." Rumsfeld, and the entire apparatus he represents, is the Unknown Soldier of this comics, his existence is dependent upon the rest of us not knowing. Unknown Soldier asks not only to gaze deep, but to refuse to accept everything we are told at face value. Here, the Soldier is only as immortal as we allow him to be. 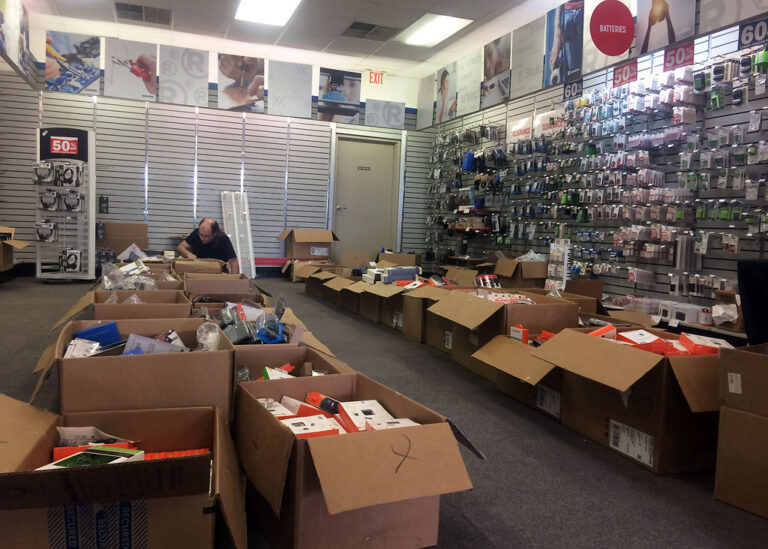 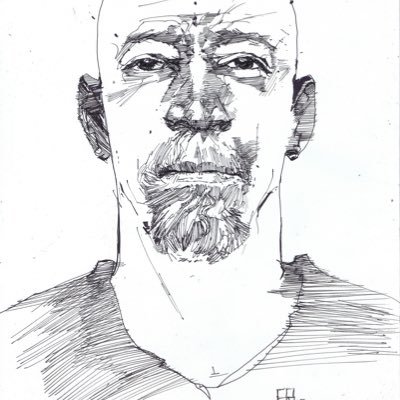 “We Were Never Comforting. And We’re Not Comforting Now”: The Denys Cowan Interview