Today on the site, Kim Jooha takes a look at the dialectical foundations of comics in her latest column.

Many fundamental elements of comics constitute dialectic relationships. Dialectic means that opposite or conflicting relations that result in a new form: thesis x antithesis → synthesis.

For example, comics typically consist of words and pictures. The actions upon them, reading and seeing, are both executed by the eye. This leads to conflict and makes the relationship dialectic.

A dialectic related to reading and seeing is that between page and panel. When reading comics, first you ‘see the whole page’ and then you 'read the panel.’ Here, the page is the whole, while the panel is the part. We can see this dialectic working on the pages of Jimmy Corrigan.

Also, Melanie Gillman brought in Day Two and Three of their Cartoonist's Diary.

And yesterday, we published Alex Dueben's interview with Paige Braddock of Jane's World.

Jane’s World started in 1991 as a single-panel comic, do I have that right?

It was called See Jane. I was trying to play with this idea of not having a set cast of characters. It was just random thoughts, standalone gags – and I found I’m not very good at that. Some of them were okay, but I think my strength is more in characters in conversation with each other. The humor came out through character interplay. I had these three or four characters who kept showing up more often. That’s when it changed from a single panel to a comic strip with a regular cast of characters.

So you were making Jane’s World the comic strip for a few years before it launched online on whatever GoComics was then.

I pitched it to some syndicates and of course the storyline back then wasn’t overtly gay but it seemed too gay to conservative newspaper editors. I just started publishing it online in 1995. That was about five years before comics.com which then got taken over by GoComics. I like to say I had a webcomic back when people didn’t really know what the web was. [laughs] 1995 was like the dark ages.

—Reviews & Commentary. At The Guardian, Jonathan Jones (who appears to enjoy riling up comics fans, based on his previous comics-focused pieces), tears apart a new manga exhibition at the British Museum.

Manga can be translated as “pictures run riot” and that is a beautiful description of these late 19th-century masterpieces. The trouble is that, on the evidence of this very odd exhibition, a lot of the riotousness has gone out of Japan’s graphic art since the 1880s. Today’s manga comics may be hugely popular in Japan and have a growing worldwide fanbase, but, as art, they don’t come near the verve and audacity of Kyōsai or Yoshitoshi.

Next to Yoshitoshi the curators display Inoue Takehiko’s manga series Vagabond, a martial arts adventure story about a swordsman called Miyamoto Musashi. We’re supposed to see a connection – and a curator who showed me round presented it as a comparison of equals – but, artistically, the images from Vagabond are internationalised and all too familiar. The hero looks like a Jedi knight and, with their slick style, these could easily be production drawings for the next Star Wars film.

Brian Nicholson writes about a selection of comics he's recently purchased from the bargain bin.

The New World by Ales Kot and Tradd Moore. Credit where it’s due, this was not only a lot better than the last comic by Ales Kot I read, it was maybe the best thing I pulled out of a bargain bin. This is largely due to Tradd Moore’s art. His art is slick, sort of in the vein of James Harvey. There’s this sort of HD sheen to it I assume comes from working digitally, where the characters don’t lose definition as they’re drawn smaller. This cartoonishness stops the book and its overt politics from lapsing into pretentiousness or didacticism. It does make the book feel very cute, where even as the narrative seems like it’s copying Transmetropolitan it feels like it’s for younger millennials or Gen Z. For a book taking place in the future, the young protagonists sure do relate to their parents in a very 2018 way, and it kind of feels like YA. It seems as if the author’s optimism about the future comes from certain trends among current youth, though in turn I find the protagonists annoying.

Chelsey Johnson pays homage to Alison Bechdel's Dykes to Watch Out For.

I first encountered Dykes to Watch Out For in the mid-Nineties in the Oberlin College library. Alison Bechdel’s comic strip was still ongoing then, periodically collected and published in horizontal paperback books with bright covers. I flipped through them in the stacks, but as with real live dykes, I was too intimidated to check one out and bring it home. I had a massive case of imposter syndrome regarding my sexuality. Just because I wanted to be queer didn’t mean I was, right? I mean, I also wanted to be a writer. I had once wanted to be a jockey. I had wanted to be a singer. I had wanted to be all kinds of things there was no guarantee I had the mettle or capacity for. So I paged through these books fascinated by the stories they told about a group of queer women (and a man or two) who are friends and lovers and exes, and also a bit despondent about how far that was from my life. Bechdel herself had attended this school, but most of my friends there were straight or at best heteroflexible; it wasn’t until I graduated and left that I truly joined the gays.

—Interviews. The most recent guest on the Virtual Memories podcast is Nina Bunjevac. 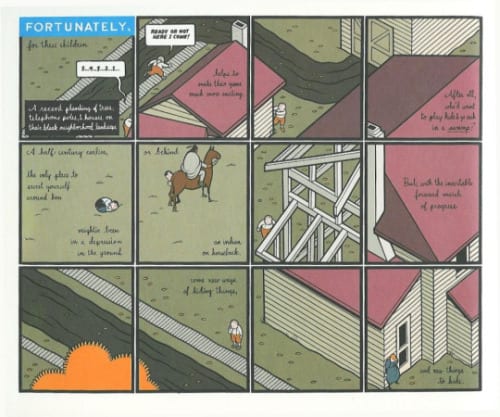 A Dialectic Approach to Comics Form 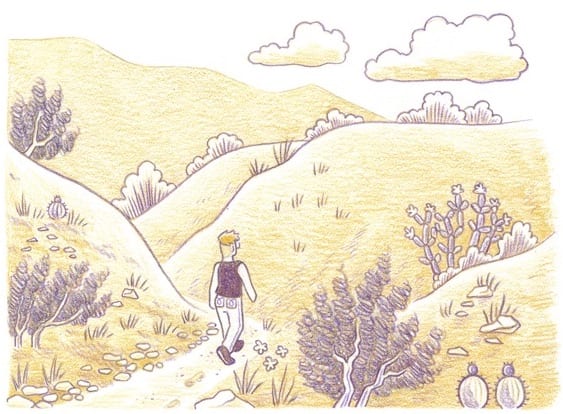