Alan Shenker gave up a good job at the Post Office to join the underground press in the late 1960s. When he quit his steady civil service position as a letter carrier he knew he had to make his new career work. He learned the craft of cartooning on the job, by hook and by crook, like many of his contemporaries. He had no formal art training but before he knew it, he was art directing several publications.

“Everyone got experience with underground papers, which was great,” he said. You didn’t have to be professional. You were able to learn the trade as you did it.”

He produced illustrations and comics for the East Village Other, Gothic Blimp Works, The Rat, Kiss, and the New York Ace. He also produced pages for several underground comix, including Douglas Comix, Illuminations, Insect Fear, and the paperback collection Swift Premium Comics.

It was a free for all subterranean publishing heyday during the 1960s and 1970s but like all good things the counterculture press eventually met the end of the era around the same time the Vietnam War was done. Yossarian also blamed the demise of the East Village Other on mismanagement.

“It just kept getting worse and worse. It went from weekly to whenever. It lost typesetting. It just got to the point where the staff walked out and started their own paper and that folded EVO. There were always shit heads running EVO. It was always mishandled.”

However, the sexually oriented tabloids that debuted about the same time survived and even thrived through the next decades, and Yossarian found work as an art director at Screw magazine. That’s where he met his long time friend Maryann, who got a job at Screw as a receptionist when she was a 19-year-old punk rocker.

He remained a well-known character in the Lower East Side, said Maryann, and he easily crossed the generation line. “He stayed in contact with a lot of old friends and made many new friends with the younger people who moved in.” He managed to accumulate vast collections of pop culture items over the years, including signed baseballs and icons from the 1940s. “He was a wonderful man who was a good friend to me. He will sorely be missed. He was probably the most decent person I have ever met.”

The characters he developed in his strips included The Funny Nazis, Nancy Kotex, and Miracle Milton, among others. His subject matter was rude and crude, and often done in deploringly bad taste, which made it a perfect fit for the taboo-busting underground press. Yossarian had a fetish for bald women and self published several issues of The Razor’s Edge, which featured women shaving their heads. He was seldom satisfied with the quality of his work, and he didn’t draw much after the underground went under.

He was visiting his friend Spain Rodriguez in California when the Cartoon Workers of America was formed and he drew a logo for the group showing America being stabbed in the heartland. He said he enjoyed the camaraderie of the comix boom in San Francisco, but preferred New York, where he lived in the same rent controlled apartment in the Lower East Side until his death.

His friends described his lifestyle as a “flaneur” or a “downtown habitué.” “He did what all New Yorkers do,” said Maryann. “He complained about everything. He sat around drinking coffee at cafes. He talked to everyone. He was totally righteous and he never sold out.”

His old friend Rex Weiner, who co-founded the New York Ace with “Honest Bob” Singer, relates an anecdote about his old friend in an obituary in The Paris Review. He describes how the East Village Other was on its last legs in 1972 and the Ace was the new kid in town. Yossarian drew a cover for the new paper showing a meat cleaver chopping an eyeball in half.

“With this cover he’d created especially for us, Yossarian was declaring his allegiance to the ACE, betraying EVO, to which he’d contributed many cover illustrations, and its paternal leader,” said Weiner in the obit. “EVO’s logo was the all-seeing eye, and for our cover Yossarian had placed an eyeball on a chopping block split by a butcher knife, as if to say, “EVO … You’re DEAD!”

Yossarian was sweet and shy, said Weiner and as a good Jewish boy, he was conflicted about his art. “He had a fetish for bald women you know, but he was out front about it. There was a nice militancy about his cartoon work. He believed that cartoonists should be organized and independent and he was proud of being part of that underground movement.” 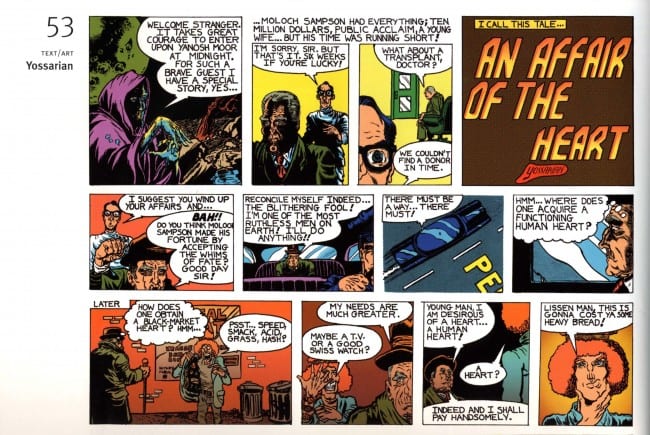 Weiner last saw his old friend in spring 2012 when The New York Times and NYU hosted an event at the Arthur L. Carter Journalism Institute, called “Blowing Minds: The East Village Other, the Rise of Underground Comix and the Alternative Press, 1965-1972.” For several weeks, a series of articles by former staffers chronicled the deep background of the infamous underground newspaper. It had been years since he had seen many of his former comrades from that tumultuous time, and it was great to see them all again, he said, including Yo.

I met Yossarian in December 1972 when we arranged to do an interview at his downtown apartment. He used the pen name Yossarian for several reasons, he told me. “Basically my parents didn’t want me to use the family name. Plus if you choose a name, you have a lot more leeway. People start to accept you the way you want to be, rather than some name that your parents chose twenty years earlier and forced on you. Plus it’s nice to be semi-anonymous. I can go into a certain situation as Shenker and get better feedback on my work, because they don’t know I was the one who had done the work.

He gave me all nine issues of the New York Ace as well as a file folder full of clippings that Tuli Kupferberg, one of the founders of folk/rock/satire band The Fugs had left behind and didn’t want anymore. There were tear sheets from many underground papers outside of New York as well, including obscure ones like The Great Speckled Bird from Atlanta, the Austin Rag, Detroit’s Fifth Estate, and the New Left News. I still have them. 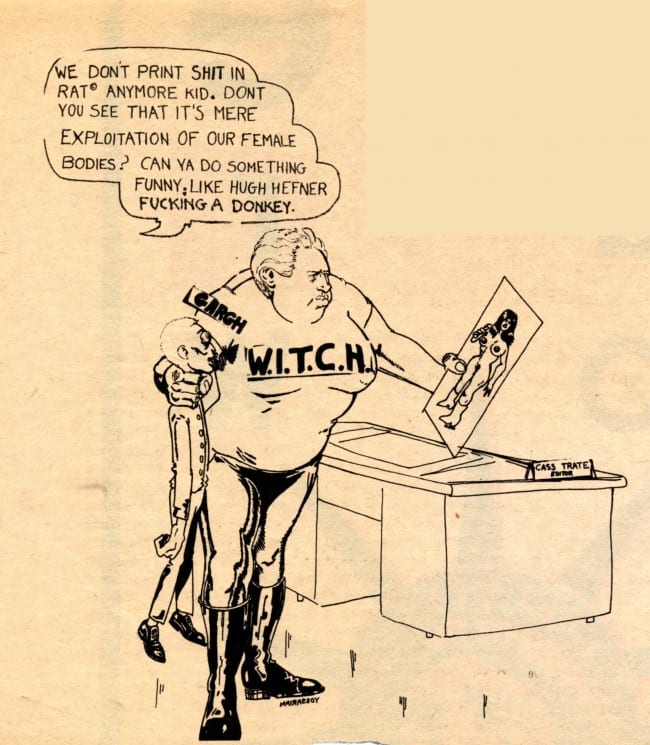 I got to his place in the afternoon but it was dark by the time we finished talking. I was apprehensive about walking back to the subway station by myself with a bag full of camera gear so he generously offered to escort me. The streets looked scary to me but he was comfortable in his surroundings. We stopped by the Peace Eye Bookstore to take a few photographs. That was the last time I saw him.

On the Facebook page recently opened for Alan Shenker his sister Diane posted this suggestion:

“Those of you who need to do something in honor of his memory will probably come up with an appropriate idea on your own, but if you need one---think trees. He loved them and the creatures living in them. So plant a tree (he especially loved the underrated Rose of Sharon) or contact the Arbor Day people.”

Ironically, his most recent published work, which he actually drew forty years ago, appeared in the resurrected anthology Someday Funnies, called “An Affair of the Heart.” 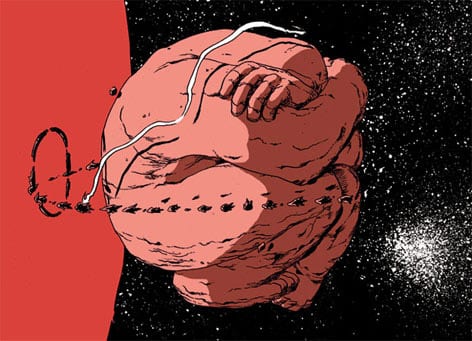 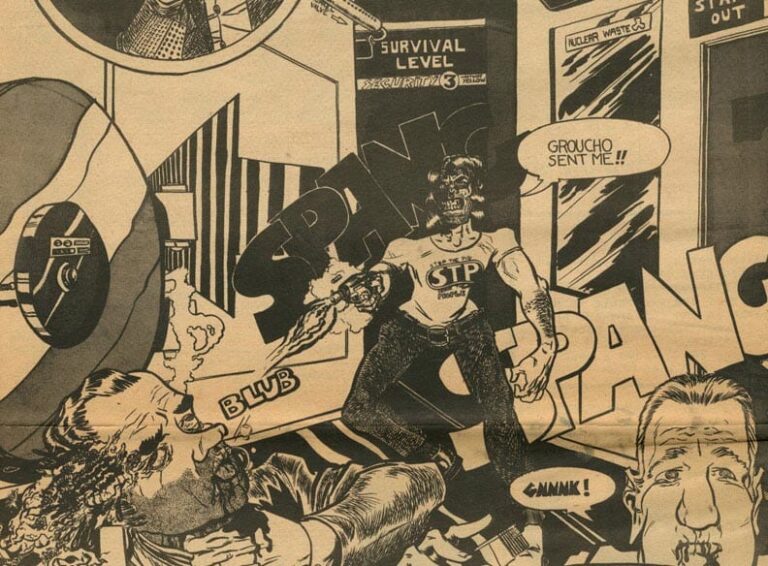