Jean-Thomas “Tomi” Ungerer passed away February 8. He was 87 years old.

Ungerer had been an artistic force of nature for more than sixty years — a cartoonist of international repute, a bestselling children’s book author, a painter, a prose writer, a sculptor, a sexual provocateur, a political dissident, and more. He was born in 1931 in Strasbourg, France. Ungerer’s father, Theo, co-owned, with his brother, a factory that produced astronomical clocks. Theo died when Ungerer was 3 years old. After the father’s death, Ungerer’s family consisted of his mother and three siblings — his brother, Bernard, and his two sisters, Vivette and Edith. The Nazi incursion changed his life. Tomi was 10 years old when the Nazis rolled in and took control of Alsace; he lived under their fascist regime for five of his most formative years, which he chronicled with emotional and factual perspicacity in Tomi: A Childhood Under the Nazis.

After high school, he continued his education, spending many hours at the Musée Unterlinden, where he saw Matthias Grünewald’s Isenheim Altarpiece, which affected him as deeply as any single work of art: “Grünewald has without a doubt exerted the greatest influence of any painter on my artistic career.” He went hitchhiking across Europe — in Iceland, Norway, Yugoslavia, and Greece — and worked on cargo vessels. In 1952, he joined the French Camel Corp in Algeria, where he served in the Zerakla Camp, but was discharged due to pleurisy. He studied at the École des Arts Décoratifs [Municipal School for Decorative Arts] in Strasbourg between 1953 and 1954, but he was restless and was soon expelled for being “subversive and perverse.” A charge to which Ungerer replied: “The professor who wrote that comment was either a complete fool or perceptive beyond his wildest imaginings.”

Ungerer famously arrived in New York in 1956 with sixty dollars in his pocket and two trunks of drawings and manuscripts that he intended to show to publishers. What finally spurred him to move to New York, he has said, was jazz: “I was a big jazz fan, I thought I would be able to see some jazz.” He was disappointed in the jazz scene he found there, but he nonetheless took  to Manhattan, and for the next fifteen years wrote and illustrated children’s books and drew countless images for posters, magazines, advertising, and satirical books. According to Ungerer, he showed his portfolio to the pioneering editor Ursula Nordstrom, who told him to come up with a children’s story. He did, and the result was The Mellops Go Flying, quickly followed by The Mellops Go Diving for Treasure, both published in 1957, both enormously successful. Between 1957 and 1973, he wrote and drew twenty-two children’s books, as well as illustrated numerous children’s books he didn’t write. Ungerer shared his contemporary Maurice Sendak’s belief that stories for children should not be sugarcoated, that, in fact, children should have to wrestle with the reality that awaits them, which will include fear and loneliness and pain. “Why am I the pedagogues’ nightmare?” he once asked. “They think I traumatize children. They think children should be loved and protected. But if you do only that, they’re not ready for life.”

Later, Ungerer went on to create a number of books for adults, like Underground Sketchbook, Fornicon, and The Party. A shocking departure from his children’s stories, his adult books are viciously satirical commentaries on the folly of our relationships and the absurdity of our social order. In Ungerer’s adult material, his sly, subversive wit, visual perspicacity, and profoundly black humor is on full, unfettered display.

His most prolific period, between the ages of 26 and 40, found him creating a staggeringly voluminous body of work. In addition to the children’s books he wrote and drew entirely himself, he collaborated with the children’s-book author William Cole on eight books; illustrated at least twenty-six books by other writers; appeared in The New York Times and various other mass circulation magazines as well as several small circulation literary magazines such as The Paris Review; drew advertising illustrations and conceived entire ad campaigns for myriad commercial clients; designed posters for Broadway plays and films, most famously the poster for Dr. Strangelove; and created a series of anti-war posters during America’s involvement in Vietnam that ranked among the most viscerally shocking anti-war images ever drawn. “As brilliant as the kids’ books are,” said Jules Feiffer, “and as brilliant as his other work, when I see them reproduced still I find those political posters from the ’60s shocking to look at.” 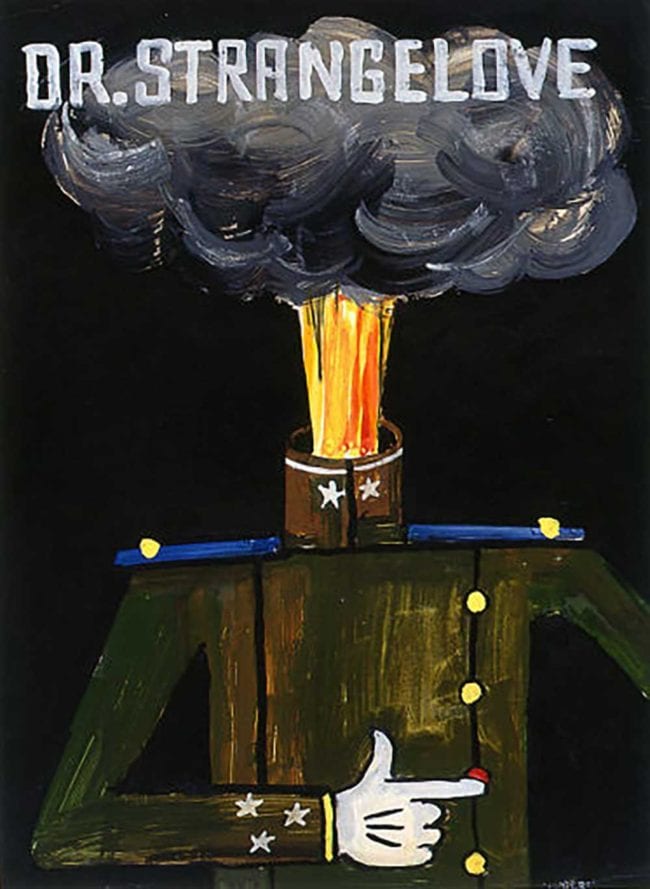 After a confrontation with the American Library Association in 1969, Ungerer became disenchanted with the land of the free and the home of the brave. He first moved in 1971 to a small fishing village on the Atlantic coast of Nova Scotia, a wild, lawless place abounding in eccentric characters. Then, in 1976, with a week’s notice, six suitcases, and his wife Yvonne pregnant with their first child, they moved to Ireland, where he finally found peace — or what passes for peace in Ungerer’s world. Of Ireland, he said, “It’s the one place I’ve found that I fit in. … It’s the quality of the people we found there, the right kind of spirit-minded people.”

The last two books he published in the U.S. during this period were The Beast of Monsieur Racine (Farrar, Strauss and Giroux, 1971) and No Kiss for Mother (Harper & Row, 1973). With an occasional, rare exception, his books did not appear in the U.S. again until Phaidon began reissuing his children’s books in 2009 — a thirty-six-year exile from American publishing (though possibly a self-exile). Throughout those thirty-six years, his creativity and productivity never waned, and he published dozens of books for adults and children primarily in Germany, France, and England. He also wrote a series of short stories under the name “Malparti” in French and German. To the end, his writing and drawings comprised among the most uncompromisingly coruscating and unforgiving portraits of man’s inhumanity to his fellow man ever penned by an artist.

An artist whose creative output knew no bounds, Ungerer was also a sculptor. He created three-dimensional objects using, according to his website, found objects, repurposed farm implements, and material such as wood, rust, and Barbie dolls. He designed, with the architect Ayla-Suzan Yöndel, the kindergarten building Wolfartsweier (in Karlsruhe, Baden-Wuerttemberg, Germany) in the shape of a cat, where the mouth below a whisker-lined nose is the door, the eyes are windows, and the belly of the beast serves as classrooms. The cat’s tail is a slide that children can play on. His website lists over 120 public exhibitions between 1960 and the present. There is an illustration museum in Strasbourg in his name, and he served on French and German cultural committees. 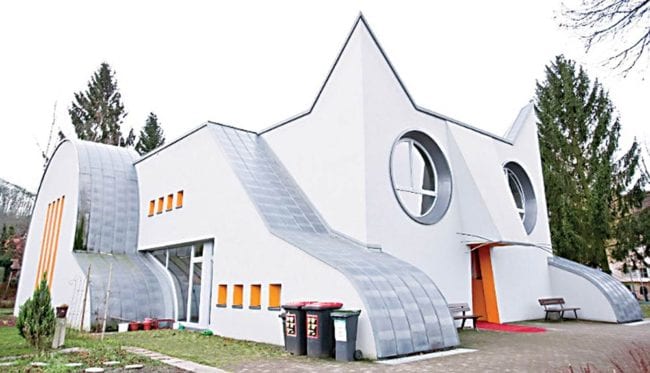 When asked why he expressed himself in so many different ways, Ungerer replied, “I would be bored otherwise. It nearly gives me an inferiority complex when I see other artists who have one style and just build it up. I am a jack-of-all-trades, I go in all directions. I am interested in this and that. On one day, for example, I can start working with sculptures, the telephone rings and it gives me another idea for a story so I have to write it down, then I go back to another project afterwards.”

Ungerer is survived by his wife, Yvonne; his four children; two grandchildren; and his sister. 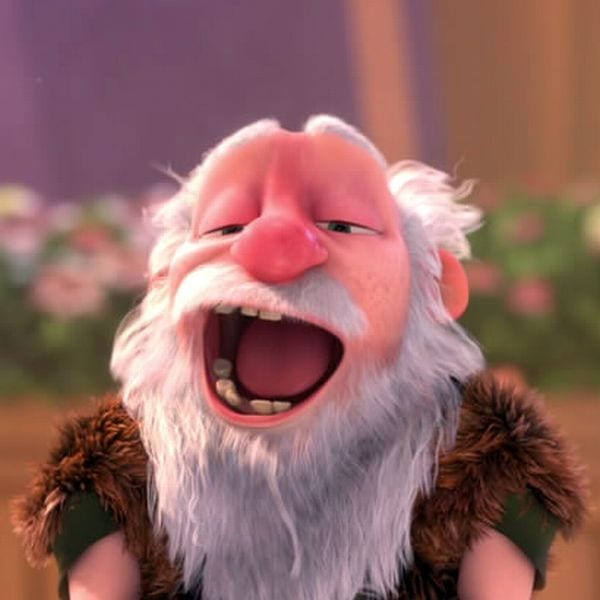 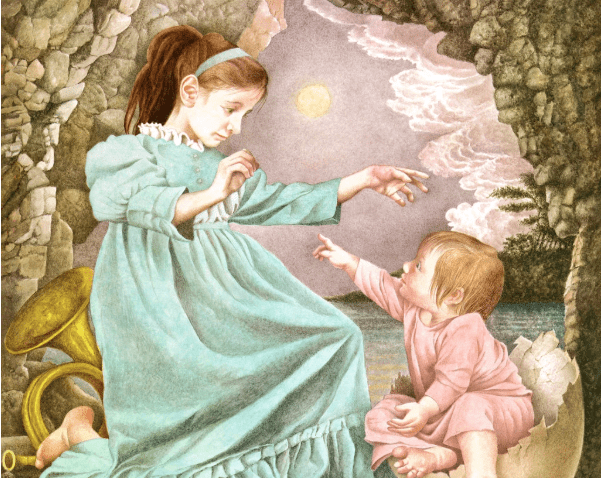