I dunno, I'll always end up thinking to: 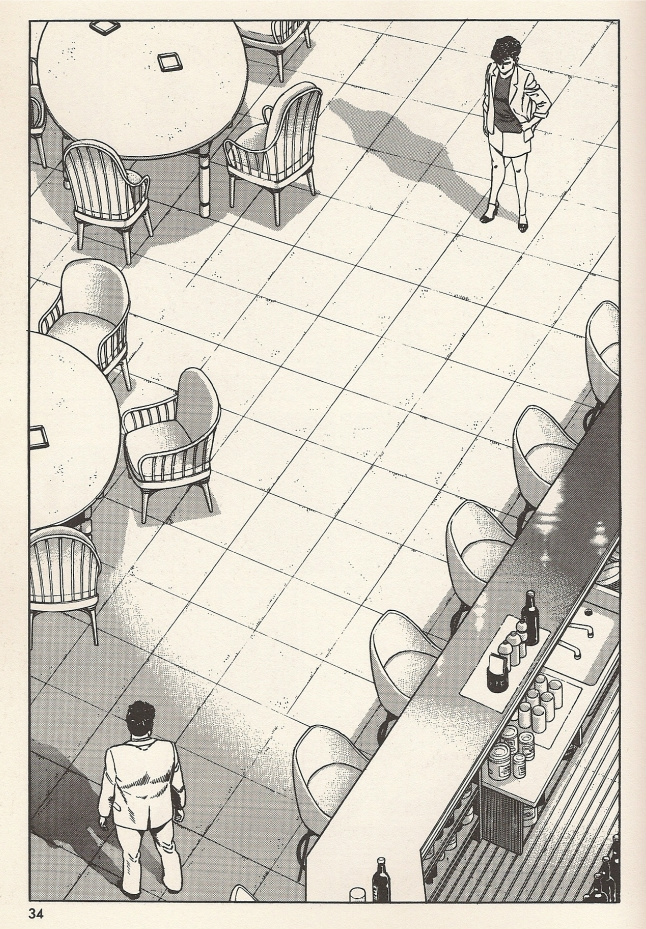 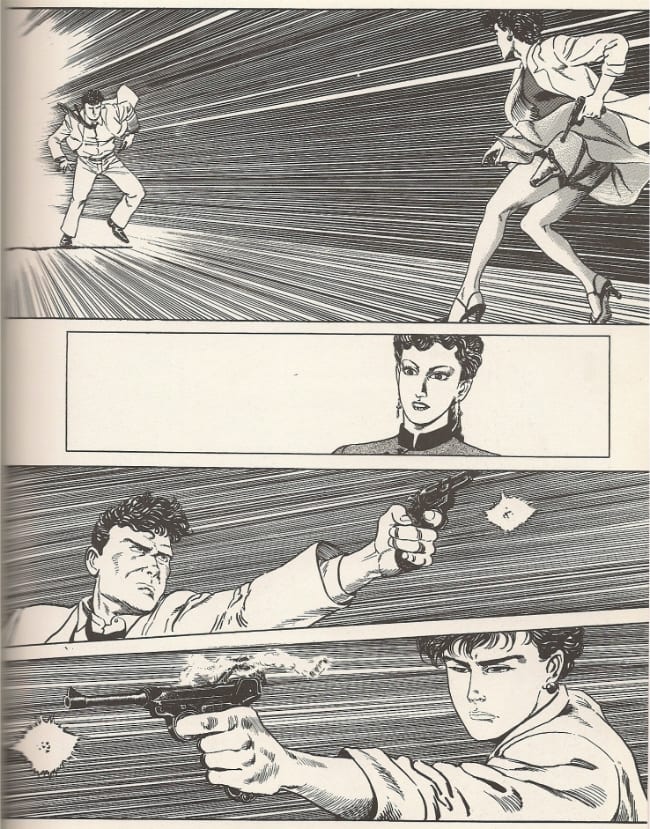 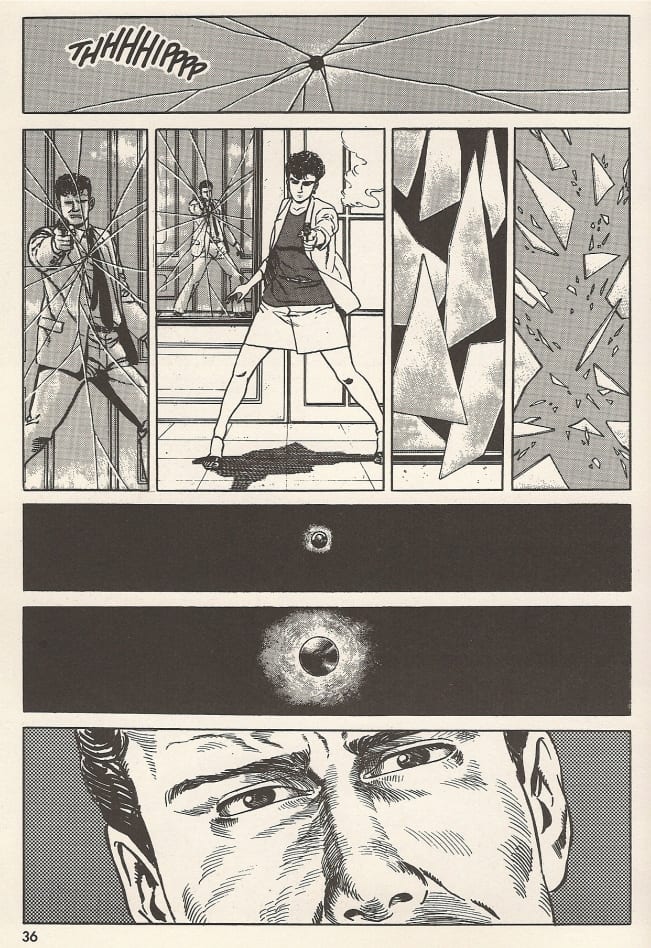 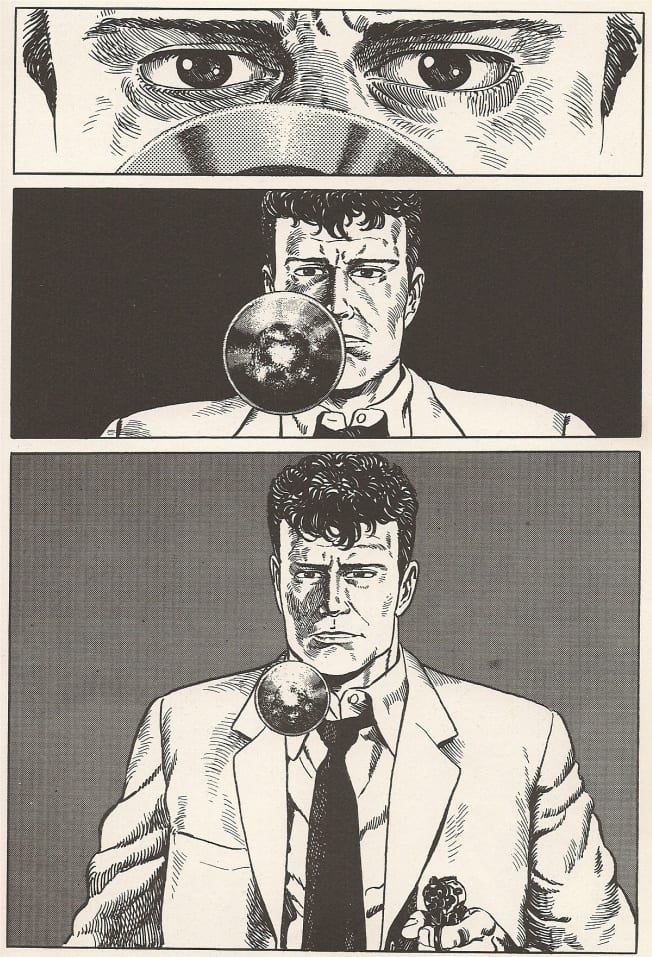 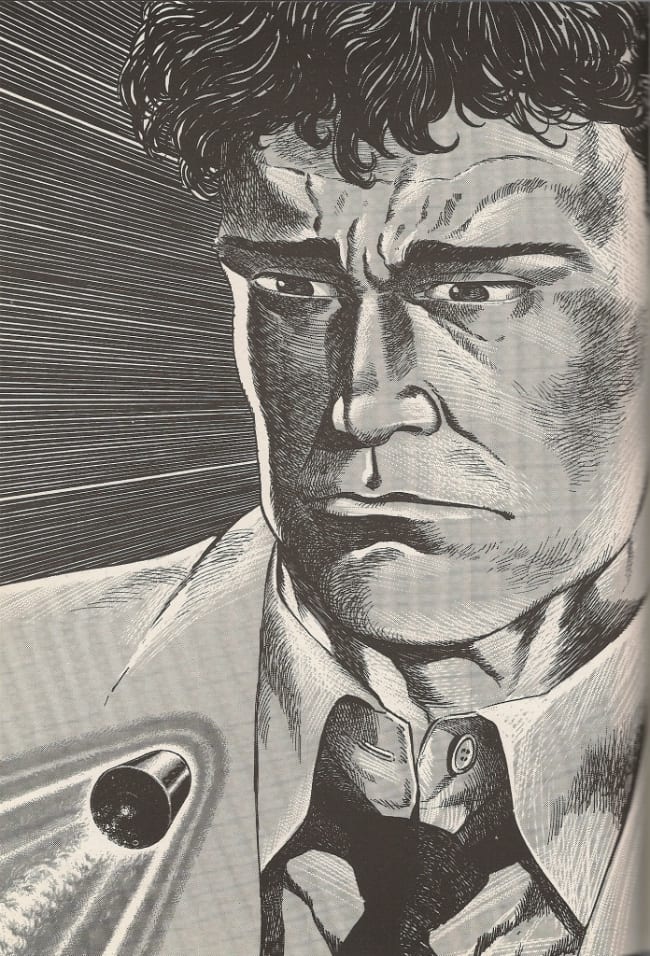 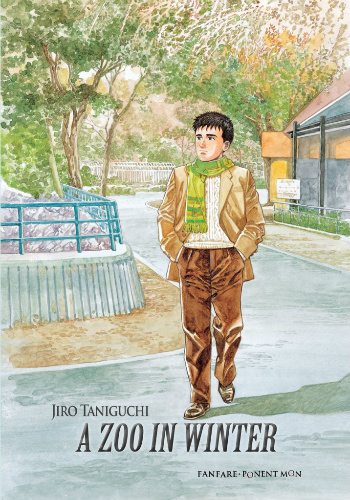 A Zoo in Winter: In retrospect, one of the odder surprises for me in that Hooded Utilitarian Best Comics list a while back was the interesting level of support for Taniguchi's The Walking Man -- which placed in a massive tie for 76 of 115 with the likes of All Star Superman, Yotsuba&! and It's a Good Life, If You Don't Weaken, among others -- a collection of early '90s shorts in which a man takes a series of walks around his neighborhood; the intent at the time of serialization in Kodansha's seinen magazines was to provide a soothing, contemplative oasis in the midst on various ongoing projects, although seen by English readers as collected in 2004 by Fanfare/Ponent Mon it seemed almost confrontational in its marriage of Taniguchi's European-inflected manga realism -- it's useful to know he's of essentially the same stylistic 'generation' and base aesthetic inclination as Akira creator Katsuhiro Otomo, though Taniguchi is a bit older, and they've developed themselves is considerably different ways -- to a sparkling clean narrative detailing the ephemeral phenomena of observing the natural world with the utmost serenity.

This is Taniguchi's newest Fanfare/Ponent Mon hardcover release, a 232-page one-off (so far) project from 2008 forming a semi-autobiographical portrait of young "Hamaguchi" and his personal affairs in the late '60s as he begins a life in manga apprenticeship. It's basically his A Drifting Life, and probably most similar in tone to A Distant Neighborhood, in that it blends crystalline period scenes with a fairly text-heavy and frankly sentimental writerly voice - truthfully, I've found these wispy, moist-eyed eyed works to lack the command of the more emphatically art-focused The Walking Man, but I can't deny the appeal of Taniguchi's artwork, and anyway I'm an absolute sucker for first-person accounts of older comics scenes, particularly in comics form. Samples; $23.00. 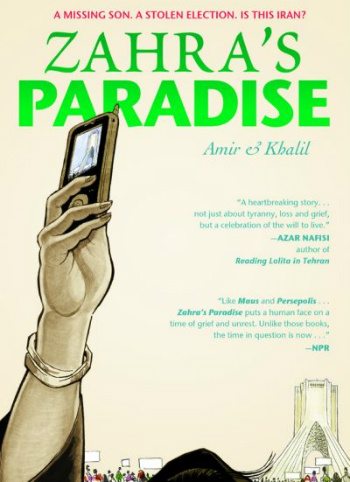 Zahra's Paradise: Your huge book publisher-released politically relevant comics choice for 9/21, a First Second print edition of a pseudonymous webcomic (by "Amir" & "Khalil") about a man's technology-powered search for his vanished brother in the wake of Iranian election protests, initially posted in thirteen languages as sponsored by First Second, Casterman, Rizzoli Lizard, Norma Editorial and other international comics-minded entities. Print-format extras are sure figure into these 272 pages; $19.99.

The Simpsons' Treehouse of Horror #17: These annual Bongo productions are usually good at presenting off-kilter looks at the long-lived franchise through the contextual freedom of Halloween stories -- a bit how like old Hollywood studio movie would use dream sequences as a means of cutting loose the really crazy cinematic ideas in a narratively palatable form -- and I expect this year to be no different as the great Jim Woodring (an Aliens and Star Wars veteran, remember!) makes an appearance, along with Zander Cannon & Gene Ha of Top Ten, among others; $4.99.

Monster Christmas: Oh god, Christmas too? Already? My life is slipping away. There's hair on my keyboard, and I know it's because I'm aging. Dying. This is a 32-page Papercutz edition of a 2004 comic by Lewis Trondheim about kids and their pet monster. I had a dream a woman hovered over me to represent the choices I had not yet taken in my life and her inscrutability upset me as a personal failing in my own understanding of people ostensibly close to me. Three additional Monster volumes are forthcoming. Preview; $9.99.

Archie's Joke Book Vol. 1: A Celebration of Bob Montana Gags!: God, every single New Comics Day seems to bring a fresh, bubbling mudslide of Archie material from all points in history - I didn't even cover last week's offerings, among them Dark Horse's '40s-borne Archie Archives vol. 2, and Marvel/Icon's concluding issue to Criminal: Last of the Innocent, which I like to think of as Ed Brubaker's Life With Archie magazine pitch presented in virtually unmodified form. Now we've got (AMONG OTHER THINGS) a 208-page IDW assemblage of half- and full-page pieces by franchise godhead Montana, no doubt perfect for flipping through as you puzzle out where to place your Archie dollars; $29.99.

Detroit Metal City Vol. 10 (of 10): Speaking of gentle good humor, here's the last of Kiminori Wakasugi's manga about a meek young thing who realizes a vast talent for death metal as music and lifestyle. And speaking of alter egos, I suddenly realize I know absolutely nothing about Wakasugi himself, who purportedly is not very forthcoming in interviews. I also couldn't tell you what he's doing (if anything) as a follow-up, but I'll keep my eyes peeled; $12.99.

With the Light: Raising an Autistic Child Vol. 8 (of 8): A manga conclusion of a sadder sort can be found in this 304-page Yen Press release, which collects the final completed content as well as unfinished artwork for this drama by Keiko Tobe, who passed away in 2010; $11.99.

Dark Horse Presents #4: I kinda dug the really weird, self-parodic Concrete story last issue, and I'm not seeing Paul Chadwick among the listed contributors this time, so I'm wondering if it was a 'ha ha, see ya' sort of thing? Richard Corben and Michael T. Gilbert also wrapped it up, and I think David Chelsea too, so there's a bunch of new features this issue, including one of those wordless dinosaur comics by Ricardo Delgado and a new Beasts of Burden piece by Evan Dorkin & Jill Thompson, along with something drawn by Steve Parkhouse, whom I am generally pleased to see. Also, variant cover artist Geof Darrow is interviewed, because who needs a reason for that? Not me. Samples; $7.99.

Creepy Archives Vol. 11: What's really scary is how far into the '70s this project is getting, with its plethora of mostly forgotten work by mostly European artists filling issues #51-54. With Esteban Maroto, Ramon Torrents, Jose Bea, Rafael Auraleón, Felix Mas, and Adolfo Abellan, along with Reed Crandall, Tom Sutton and the aforementioned Richard Corben; $49.99.

Hellboy Vol. 11: The Bride of Hell and Others: But if its newer Corben you want, he's all over this most-recent-of-random-stuff collections for the Mike Mignola creation, including a superb turn on the Catholic-inflected luchador story Hellboy in Mexico (Corben's next project is set to be an original graphic novel sequel to that one), as well as the Creepy-like anthology comic Double Feature of Evil and the more orthodox Hellboy vs. a Mystery short The Bride of Hell. Also included is The Whitter Legacy (a short for USA Today drawn by Mignola himself), The Sleeping and the Dead (an extended collaboration with Scott Hampton) and Buster Oakley Gets His Wish (a totally wonderful sad-funny story with Kevin Nowlan). Maybe one of the stronger Hellboy shorts collections overall; $19.99.

B.P.R.D.: Hell on Earth - Russia #1 (of 5): Meanwhile, the other side of the world continues to operate with new primary artist Tyler Crook, in what will be his longest continued story so far. Preview; $3.50.

Wonder Woman #1: Unless you're a really huge fan of Greg Capullo -- the Image comics mainstay who's drawing Batman with writer Scott Snyder and building probably the most anticipation among the return of the '90s sector of the DC relaunch -- this Brian Azzarello/Cliff Chiang production is definitely your prime superhero debut of the week, if only to see what the Doctor 13 team does with this most famously tricky of all inescapable action funnybook concepts. The best I can discern is that it's a horror-tinged thing involving capricious gods, apparently without a lot of specific connection to the rest of the DC line for the moment, which is fine by me; $2.99.

The New Teen Titans: Games: And what better moment than in the midst of a reboot to drop a project from the original Crisis on Infinite Earths team that's been starting and stopping since the 1980s? I think original plot ideas from this Marv Wolfman/George Pérez graphic novel eventually got folded into their ongoing Titans series -- after Pérez initially drew about 80 or so pages of the book and stopped -- although I'm sure some alterations have been done to the now-complete 144-page body in the ensuing decades. Never my thing, although some readers will obviously want a look at it immediately; $24.99.

Marvel Comics in the 1970s: An Issue-By-Issue Field Guide to a Pop Culture Phenomena: Finally, your book-on-comics for the week, a TwoMorrows-published sequel to author Pierre Comtois' 2009 rundown of the House of Ideas in the 1960s, commenting on a huge stack of individual issues with digressions into creator biographies and other things. This 224-page package will likely do the same for the '70s; $27.95.

CONFLICT OF INTEREST RESERVOIR: Jesus, look at this. Okay. The Man Who Grew His Beard is the first-ever North American release by the awesome, awesome Olivier Schrauwen (a Dutch-language release was published by Bries in 2010), collecting seven wildly funny and disarmingly melancholic stories, some seen in MOME; $19.99. The Armed Garden and Other Stories collects three other MOME stories, excellent allegorical religio-political adventure fantasies by L'Association co-founder David B.; $19.99. Prison Pit Book 3 sees Johnny Ryan's decadent action series introduce new personalities and some fine new stylistics; $12.99. Mark Twain's Autobiography 1910-2010 is a new 160-page comics/prose/illustration mix by Michael Kupperman, starring one of his fondest favorites; $19.99. And The Art of Joe Kubert is a 232-page illustrated overview of the works of the man of the title, edited by biographer Bill Schelly; $39.99. Now I have even less hair. Fuck you, Archie. 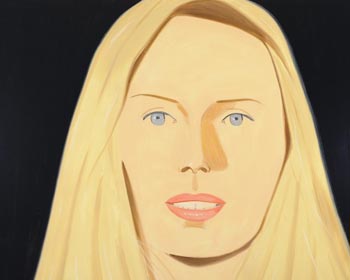 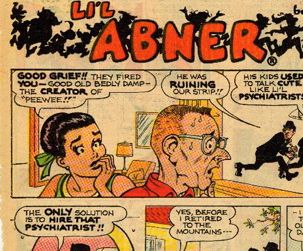