Sure - I saw Guardians of the Galaxy. I went with my brother, who told me afterward that it was the kind of film where you can watch the first 30 minutes and basically write the rest for yourself, which I think is accurate - it's a very basic space movie full of broad messages, loud action, and amusing characters whose familiar arcs are presented in an extremely simple manner. I'm not surprised it's already made so much money; it's engineered to do just that, though I didn't even think it was the best SF action film of Summer 2014 - Edge of Tomorrow is both funnier and *much* more creatively structured with its playful evocation of video game tropes, even as it eventually lapses (like many games) into blasting the end boss in its glowing weak point.

Nonetheless, I was impressed by how much Guardians of the Galaxy manages to evoke a very fundamental aspect of the Marvel creation story: that Marvel's is the world outside your window, and that its appeal comes from the relatability of its flawed, bickering superhumans. I won't be the first to observe that the Guardians film is just as much a stealthy take on the Fantastic Four, its primary thematic concern being that of family, and how rejected, mutated, weird people can find love in the company of one another, no matter how much they seem to fight on the surface - this is also, perhaps, a unifying narrative for superhero fandom. But Gunn's direction goes a little deeper. Not only do these characters squabble before saving the day, but they are given to involuntary bits of physical business that puncture the epic nature of the plot: Gamora, daughter of Thanos, fails to stifle a yawn during the team's big Michael Bay march into action; Star-Lord picks up an important space object, only to drop it and pick it up again (in what looks like a blown take wisely kept as-is); Rocket Raccoon adjusts his junk under his clingy space pants, raising a pretty huge laugh from the eagle-eyed in my theater. I'm glad somebody animated that.

The film is also Marvelesque, however, in its attempts to evoke societal relatability, and here the shorthand of narrative becomes troublesome. Much is made, both visually and plot-wise, of the cosmopolitan nature of the good planet Xandar, but none of the alien races seem to adhere to any cultural specifics; they are all happily absorbed into a miscellaneous urbanity, marked by bustle and consumption. No, the only time we see any specific cultural ritual is through the introduction of the Kree villain Ronan, an extremist who seeks the annihilation of Xandar. We are assured of his extremity, his Otherness, through a melange of exotic signifiers, ranging from powdery body painting faintly reminiscent of Holi, to samurai-like armor and a tendency to order his ugly, scrabbling, orc-like minions to perform suicide runs with their spacecraft. The heroes are 'ugly' and 'weird,' but always also sort of cute - anything truly reprehensible and icky is instantly coded EVIL, as, unfortunately, is anything in the way of semi-religious foreign ritual. Is it a step too far to note the crucifixion pose of noble tree Groot as he prepares to give his life for the team, only to be verily resurrected a short while subsequent?

There has been some discussion too of the film's gender politics; Gunn has previously attracted negative attention from this direction through his script for the video game Lollipop Chainsaw, a work of tongue-in-cheek ultraviolent sexualization, and later provoked anger when some online jokes about sex with superhero characters surfaced following his announcement as the Guardians director. I found it all to be very average; the film has some dorky chauvinist gags, offset (as it goes) by the presence of Gamora, who's characterized as the kind of competent female character you sometimes see in children's television when a goofy boy needs to be checked by a smart girl as a means of hitting as broad an audience as possible.

Still, there is an odd, sour mini-subplot concerning Benicio del Toro's character, the Collector, who is keeping a sad alien dressed up like a veritable schoolgirl in bondage. The girl eventually revolts, only to be rather prankishly killed off in a gruesome manner as a means of introducing the film's Magical Item/MacGuffin, while the Collector is simply knocked around a bit as punishment. This is pretty Troma, honestly - like Eli Roth and Trey Parker, Gunn's path crossed with the NYC trash movie institution in his 1990s youth, and with those filmmakers he shares a certain distaste for liberal piety. It sat poorly with me, though; maybe I'm too old. Or maybe I've seen too many franchises like this - the Collector, after all, is a player in multiple Marvel movies, and thus is valuable in a way virtually any random lady alien is not. And from the demographic superhero comics often favor, there are far more potentially 'valuable' male characters than women. To overcome this requires more complexity, I guess, than so basic a huge, expensive technical undertaking can be expected to manage while still assuring that massive worldwide opening. 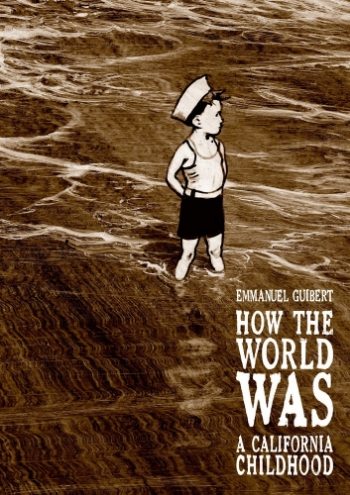 How the World Was: A California Childhood: Being the newest First Second translation of a French-language work by Emmanuel Guibert, an artist with which they've had a long association. This one's from 2012, a prequel to Guibert's 2000-08 biographical series Alan's War (translated '08), tracking the Depression era childhood of the artist's friend, Alan Cope, who died during the book's creation - it later won the Grand Prix de la critique from ACBD. Without a doubt your Eurocomics pick. This is a 160-page softcover edition; $19.99. 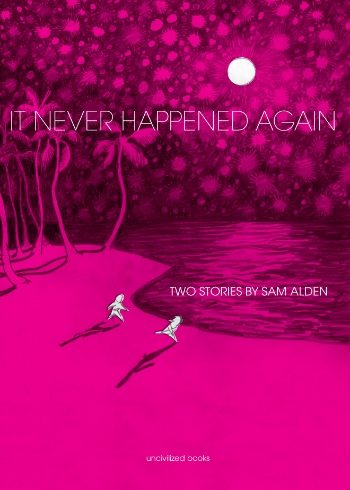 It Never Happened Again - 2 Stories by Sam Alden: And here is the latest from Uncivilized Books, collecting two stories from Sam Alden, one of the restless young cartoonists of today, adept in catching the lost and frustrated. "Hawaii 1997" is a webcomic, now formatted for print, while "Anime" explores segments from the life of a maladjusted otaku girl who lapses often into fantasies of escape. It's 164 b&w pages in softcover. Reviewed by Robert Kirby here; $11.99.

Henry and Glenn Forever and Ever: A collected edition of the popular Tom Neely-fronted rock parody/gay domestic comedy, now tipping the scales at 256 pages, presumably with the many guest stories from the serialized run included. From Microcosm, with a foreword by Rob Halford of Judas Priest; $17.95.

The Ring of the Nibelung (&) The Graveyard Book Vol. 1 (of 2): Two this week from P. Craig Russell, covering a pair of favored subject matters - opera and Neil Gaiman. Dark Horse is publisher for Nibelung, which collects the entirety of Russell's Richard Wagner Ring Cycle adaptations into a single 448-page, 7" x 10" hardcover, sure to look impressive. The Graveyard Book comes from HarperCollins, adapting Gaiman's 2008 children's novel to comics with Russell at the head of a team of artists including Kevin Nowlan, Jill Thompson, Tony Harris, Scott Hampton and others. Nibelung samples; $29.99 (Nibelung), $19.99 (Graveyard).

Endless Sky: I do not always find the occasion to discuss Caliber Comics in my daily life, but just last week I happened to mention a mid-'90s series titled Kaos Moon, which -- through its imagination-driven gods-and-mysticism scenarios and decorative panel arrangements -- seemed like a compelling precursor to the later Alan Moore/J.H. Williams III series Promethea. I knew the creator was Swiss, but I couldn't recall his name; turns out, it was David Boller, and this week he's got a 280-page autobiographical comic dropping from his own Virtual Graphics, in which the artist chronicles his time in America, looking to make it in the comics field. What service! This universe certainly delivers. Compiled from a webcomic, with more to come; $24.95.

Knights of Sidonia Vol. 10 (&) What Did You Eat Yesterday? Vol. 3: More manga, continuing a pair of Vertical series. The former is Tsutomu Nihei's continuing space opera, while the latter is Fumi Yoshinaga's episodic account of gay domestic life which is actually a cooking manga (every seinen mag's got one); $12.95 (each).

Oh My Goddess! Vol. 46 (of 48): And here we begin to approach the ending of an extended affair, as Kōsuke Fujishima elected earlier this year to conclude his *very* long-running 'milquetoast guy + magical girlfriend' comedy, which has been present on the North American scene in some format since 1994. Dark Horse plans to eventually release 15 omnibus volumes, but for now they'll continue to make sure your bookshelf sort of matches. Preview; $12.99.

Usagi Yojimbo: Senso #1 (of 6): Speaking of Dark Horse and endings, this new Stan Sakai miniseries will feature "the final fates of your favorite Usagi characters," per the solicitation, although I don't think the well-liked anthropomorphic animal warrior series is actually ceasing production - it's a science fiction-themed story set 20 years in the future. But hey, if ElfQuest is wrapping... Preview; $3.99.

God is Dead: The Book of Acts - Alpha: This one is going to be very easy to miss, but - there's a new Alan Moore story in here. As for why Moore is writing what's effectively a work-for-hire piece for an ongoing comic created by Jonathan Hickman (with a varying crew of artists) (which is no longer written by Hickman, but a fellow named Mike Costa) (the copyrights and trademarks for which are shared between Hickman and the publisher, Avatar Press, suggesting some kind of 'creator participation' deal rather than creator ownership outright), I presume he simply enjoys the underlying concept of every [g]od from every culture from all of human history showing up to confront one another, as it looks like his contribution (with artist Facundo Percio) is a fantasy autobiographical comic in which Moore finally confronts the sock puppet snake god Glycon, which has figured in with a fair amount of his public persona. Additional stories written by Costa and Simon Spurrier, with other artists; $5.99.

Miracleman #9: Meanwhile, Marvel continues to push out re-colored comic book editions of Moore's (first) signature superhero recalibration. This is the issue where Rick Veitch draws the birth of a baby - quite a to-do back in '86, but I suspect the House of Ideas' usual practice of sealing every issue in a bag will suffice in lieu of the original's Surgeon General-style cover warning; $4.99.

Walter Simonson's The Lawnmower Man - Artist's Edition Portfolio: Whoa, here's a deep cut - one of the first-ever Stephen King comics adaptations, from 1981's Bizarre Adventures #29, straight out the tail end of the b&w horror magazine era. Louise Simonson (then Jones) is probably better known for this stuff, having served as editor for the Warren magazines for a good while, but I think W. Simonson's rather uninhibited, scratch-laden work here will surprise a few eyes, provided they are inclined toward viewing a pricy collection of simulated original art. From IDW, 22 pages at 12.5" x 18". Samples/interview; $30.00.

Heroes of the Comics: Portraits of the Pioneering Legends of Comic Books: Finally, your book-on-comics of the week - or, at least a book on comics faces. Yes, it's famed illustrator Drew Friedman, with 184 pages of portraits and texts concerning all the greats, compiled into a 9" x 12" hardcover. Preview; $34.99. 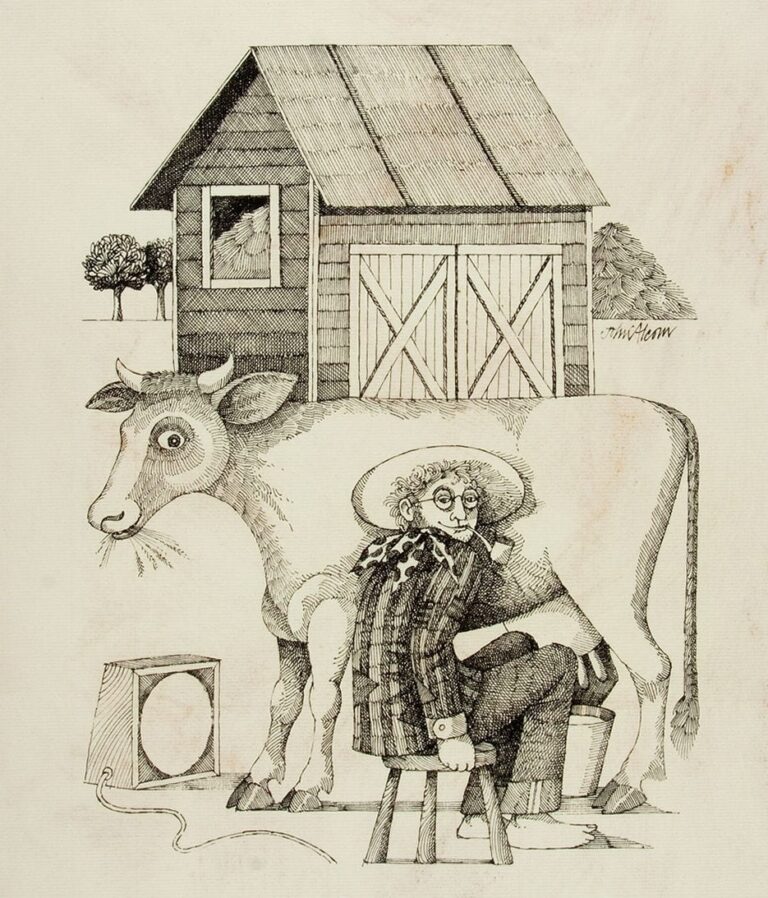 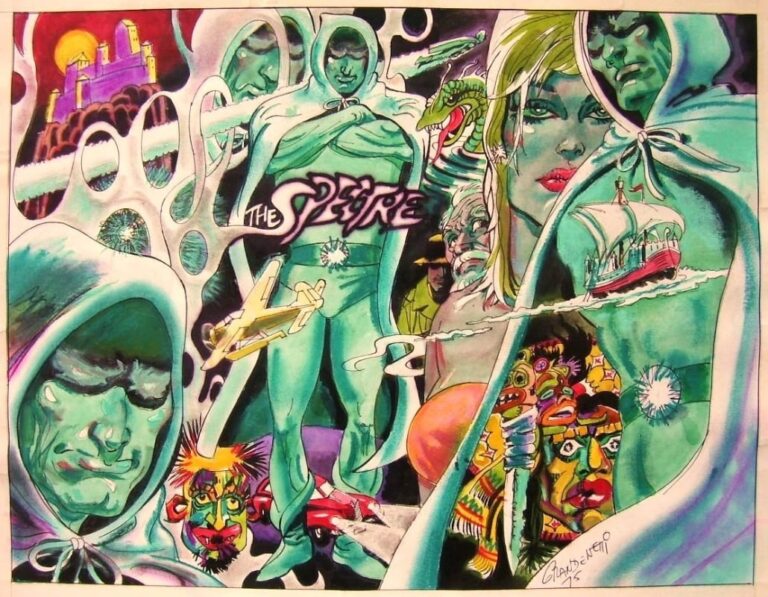