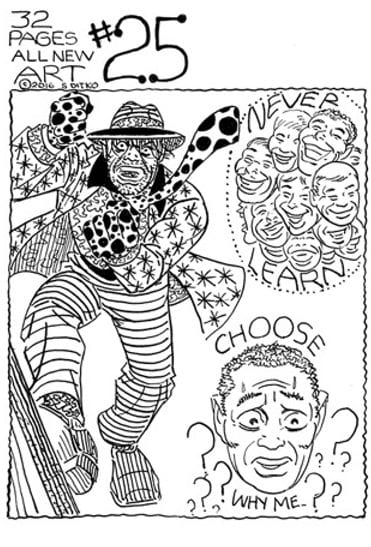 I always feel like I'm somehow trashing the books I list when I mention that it's a sparse week in comic book stores; I mean, setting aside the fact that I'm only talking "sparse" in terms of books I'm interested in as fascist dictator of this column, I also don't mean to suggest that the books we are getting are going to be dumb or anything. Some of them turn out dumb regardless, but that's life in the shipping list game. NONETHELESS, it's a pretty slim one this week, so please accept the following notice re: a comic that probably won't be distributed by Diamond anyway: Steve Ditko has completed work on the gala twenty-fifth installment of the 32-page comic book series he's been publishing in conjunction with Robin Snyder. It can be backed as part of a two-comic package with a presumably reprint-anchored anniversary edition of the old Charlton series Out of This World, which Ditko & Snyder revived in 2015. The cover is dominated by the Madman, star of the 32-page series' major ongoing serial, but what I really love is the chorus of laughing faces, which indeed never learn; Ditko has deployed the mask-like mirth of gormless go-alongs since the 1960s as a means of highlighting both the bliss of ignorance and the mockery to which those of true standards are inevitably subject. Know, however, that the chorus above and the isolated head below may as well be read as sequence, for all in the Avenging World are called upon eventually to choose, regardless of whether tears of hilarity have clouded their vision... 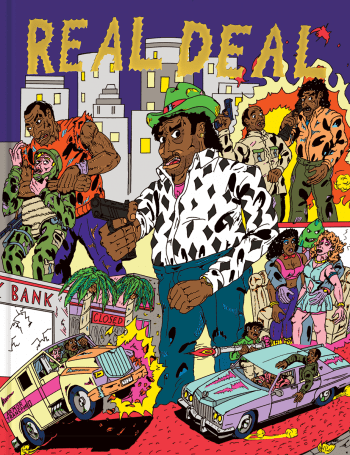 Real Deal Comix: You see? It's not a crowded week, but some people have been waiting on this forever. Being a 176-page color Fantagraphics compendium for the small-press "urban chaos" series created by artist Lawrence Hubbard and the late H.P. McElwee in 1989 as a venue for humorous and sensational stories of two-fisted city life - for a long while, these comics existed mainly in their own space, ignored by connoisseur discourse until a retrospective groundswell of writing on their virtues appeared in the '00s. I'm not sure if a recent (2015) revival issue is included in here, though I presume the earlier six issues' worth of stuff is accounted for; $29.99. 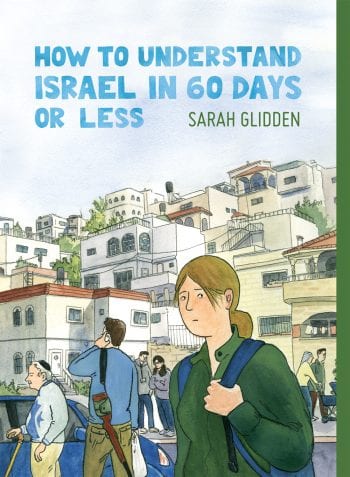 How to Understand Israel in 60 Days or Less: Also a reprint, but from a very different source - a brief wave of original hardcover books from Vertigo, which released the original in 2011. Artist Sarah Glidden is anticipating the release of a new book of comics journalism, Rolling Blackouts, from Drawn and Quarterly later this year, and it is that same publisher which here reissues her chronicle of two weeks spent in Israel, discussing the situation of life with people there. A 212-page color softcover. Samples; $19.95.

The Longest Day of the Future: Not exactly the North American debut of Argentine cartoonist and illustrator Lucas Varela - he was in the comic book anthology Vertigo Quarterly: Yellow a while back, although this is his first bookshelf release, 'translated' from a 2015 French album, although there is no dialogue anyway. A bleak comedy of futuristic capitalism, Varela finds two massively imposing companies in all-consuming competition, drawing with a very clean and smooth, rather antiseptic approach to comedy grotesques. Fantagraphics (again) publishes this 112-page color piece at 7.5" x 10.25"; $24.99.

Lucy & Andy Neanderthal: This is a new kids' graphic novel by Jeffrey Brown, a hugely-admired alt-comics artist of the '00s who is known widely today as author of several very popular Star Wars-related books for children. "The laugh-out-loud adventure features Lucy and her goofball brother Andy, as the Paleo pair take on a wandering baby sibling, bossy teens, cave paintings, and a mammoth hunt. But what will happen when they encounter a group of humans?" I have no idea. Crown Books publishes in hardcover at 224 pages; $12.99.

Blubber #3: Hey - it's an alternative comic book! Moreover, a comic by Gilbert Hernandez, who will soon be doubling-down on the floppy format as Love and Rockets returns to its magazine origins next month. Until then, we have Blubber - a selection of short, aggressive stories about fantasy animals or superheroes or any type of weird being as they fuck and eat and shit and kill in a fundamentally chaotic and amoral world. A comedy; $3.99.

Suicide Squad War Crimes Special #1: Sure, I laughed at the title. I'm not a list-making robot, I just saw the list-driven future, and was subsequently condemned to live there. What is actually notable about this comic, though, is that it marks the return of writer John Ostrander to the supervillains-for-security concept he helped popularize in the 1980s; a good amount of writing on the recent movie version has emphasized his work. Here, the Squad invades the Hague (just like Jesse Helms wanted!) to extract an American politician on trial before he can spill too many damning secrets and/or a legitimate military action erupts. Art by Carlos Rodriguez & Gus Vasquez. Preview; $4.99.

World of Tanks #1 (of 5): I also laughed at this, but only after I looked it up and realized it's actually based on an internet video game, and not just a primal Garth Ennis comic book title. But yeah, Ennis is the writer, Dark Horse (unusually) is the publisher, and -- in a rare original stateside appearance -- Judge Dredd co-creator Carlos Ezquerra is the artist (as colored by one Michael Atiyeh). Expect a fuckton of tanks from this story of a British crew pursued by Panzers. Preview; $3.99.

Mike Mignola's The Amazing Screw-On Head and Other Curious Objects - Artist's Edition: Speaking of 'unusual' and 'Dark Horse', I presume the deal for IDW to handle this enormous Mike Mignola book was sealed before DH started up its own line of bound hardcover color reproductions of original art pages at close to actual size. (IDW has also handled a similar Hellboy volume.) Nonetheless, it looks like this 160-page, 12" x 17" tome should track pretty closely to Dark Horse's 2010 expanded reissue of Mignola's '02 comedy one-shot, which in its absurd randomness and dark-whimsical Victoriana anticipated a vein of humor that became prominent in nerdy things as the '00s wore on. It is unlikely that the drawing will not excel in this format; $100.00.

Walt Disney's Uncle Scrooge and Donald Duck - The Don Rosa Library Vol 5: The Richest Duck in the World: Finally, we turn again to Fantagraphics for a new 192-page hardcover devoted to Don Rosa's much-loved Duck comics, completing his "Life and Times of Scrooge McDuck" story sequence (a biographical arrangement of scenes from the character's life, and a sort of prolonged tribute to the lore of its creator, Carl Barks) with additional comics and various supplements; $29.99.

You might be wondering what's going on with the front page image this week - rest assured, the long-threatened Akira live-action project has not come to fruition... at least not in the Katsuhiro Ōtomo sense. 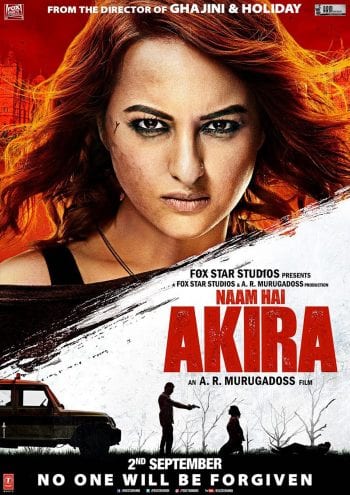 Akira (2016) is a Hindi-language film opening this weekend in India and foreign territories liable to screen such works (e.g. central Pennsylvania). It's a pretty major release; AR Murugadoss is a very successful and influential popular auteur from the Indian state of Tamil Nadu -- there are multiple large film industries inside India, Tamil cinema among the most prominent from the south -- who was partially responsible for inspiring a wave of 'South' movie remakes in the Mumbai-based Hindi-language industry, sometimes colloquially known as "Bollywood" (old-fashioned term, that) and frequently mistaken for the whole of Indian popular cinema, as Hindi works are often the most prominently exported.

Murugadoss is very much plugged-in to foreign media; among his biggest hits is Ghajini, a film he directed twice -- once in Tamil in 2005, and once in Hindi in 2008 -- which famously appropriated the anterograde amnesia/helpful tattoo concept of Christopher Nolan's 2001 film Memento and used it to otherwise divergent effect. He also directed a Telugu-language film (the Telugu cinema is based primarily in Andhra Pradesh, another southern Indian state) with the wonderful title of Stalin (2006), which reconfigured elements of the drizzly Haley Joel Osment vehicle Pay It Forward into an action thriller.

In other words, he's a bit of a magpie - and though I don't know if what you see above was specifically his idea or some member of the promotions team winking toward foreign influence, the decision was nonetheless made at some point that his Akira would display an *extremely* similar title font to that of the famous manga series and anime film. I'm not sure how well-known Ōtomo's stuff is in India (kids' properties like Doraemon and Dragon Ball are pretty popular); it could be this is meant as a movie nerd in-joke, though I'm having fun imagining the little bursts of chaos among unprepared foreign aficionados seeing the title above the showtimes at the box office and finding themselves treated to the sight of Anurag Kashyap chewing scenery.

However, while this Akira does not take anything from Ōtomo beyond the name and the font, it's also Murugadoss' first film not based on a story of his own, adapted instead from a 2011 Tamil film titled Mouna Guru. Not only is there nobody named Akira in the earlier film, but the lead role is played by a man; the real gamble of Murugadoss' Akira is that he has refitted the original work into a vehicle for Sonakshi Sinha, an actress who rose to fame primarily in 'ornamental' roles, which is to say as the designated heroine of mainstream films who gives winsome reaction shots to the male hero in the romance track and looks nice for the various dance scenes, and then fucks off for the climax of the movie unless she's kidnapped or something. Sinha has worked with Murugadoss in the past, and she been interested lately in branching out, and thus the director works to affix his golden touch to the still-unusual prospect of a major-release action-suspense Hindi picture anchored entirely by a woman. So, as a result, those foreign viewers actually will be seeing some risks up on screen, albeit without any orbital laser platforms or explosion domes.

But, does global cinema really suffer from the absence of another comic book movie? 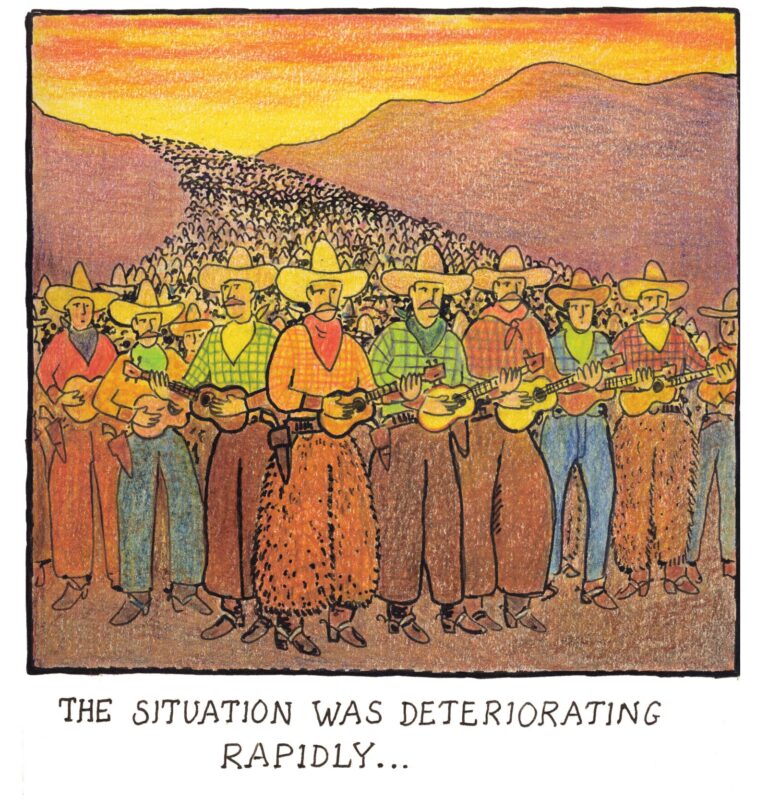 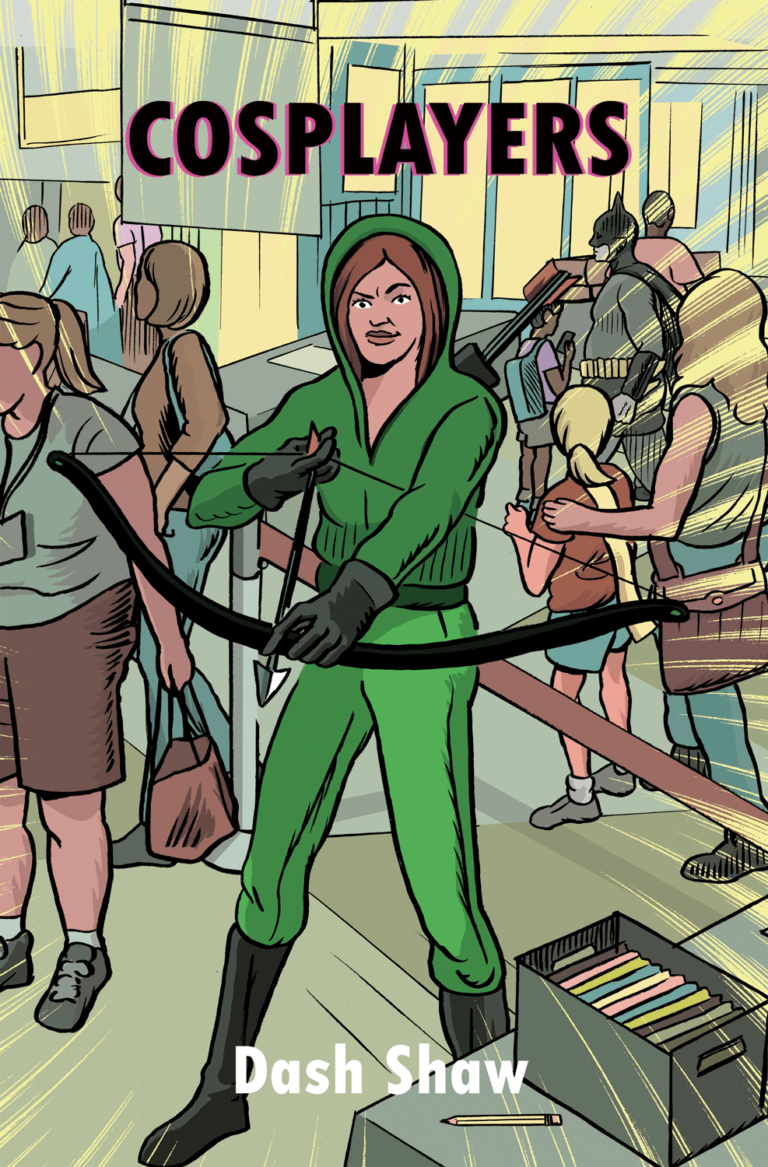