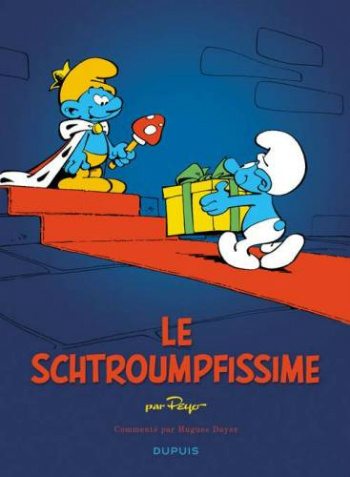 Alert reader Pedro Bouça brings to my attention the book on your left, probably the most interesting-looking comic book movie tie-in item I've seen all summer: a new Dupuis edition of 1965's Le Schtroumpfissime, aka King Smurf, now expanded to 88 pages by breaking up the original comic to sit sequentially on every on every right-facing page while an illustrated running commentary by writer Hugues Dayez appears on the left. It appears to have been released in Europe this past July.

Preview images suggest some access to archival materials -- sketches and pre-colored images and such -- which throws into relief one of the underlying ironies of the present multimedia hype: that in the U.S. Smurfs are undeniably the most endearingly recognizable Franco-Belgian comics characters of their era, yet the basis of their popularity in television adaptation and merchandising worked to totally obscure their comics origins. There's still a lot to say about King Smurf and its disarmingly aggressive lampoon of flawed democratic processes giving way to totalitarian abuse and violent revolution (I've tried it myself), but what English readers by and large lack is access to creator Peyo and editor/co-writer Yvan Delporte in the form of primary source materials, or even detailed secondary sources. The present rush of extra-comics visibility has at least gotten a big chunk of the original material back (or even initially) into translated print, albeit in physically small (and, in the case of The Purple Smurfs, edited-for-content) form, but I see a rather convenient opportunity here to partake in information blessed with some proximity to the original creating hands. Not that the French-capable among you need to think in terms of potentials.

Speaking of which, I've been thinking about another comic book movie lately. No, not the other one that opened last weekend -- though I suppose that's good for a walk down memory lane -- I mean Captain America: The First Avenger, its subtitle assuring that I can't so much as say the name of the picture without noting its status as lead-in to a major crossover Event coming up in cinematic form (along with the Times article Tim linked to yesterday, I vividly recall A.O. Scott likening the plan to "a Ponzi scheme"), let alone strain myself to recall the film's opening scene, a murky present-set ice excavation serving little purpose but to assure impatient viewers that yes - this is all very Important to Today.

I liked Captain America okay; maybe it was destiny, having been one of the 177 American children who saw director Joe Johnston's adaptation of Dave Stevens' The Rocketeer in theaters back in '91. But what I liked best was meta-texutual - it was a film keenly aware of superhero movie history beyond the grasping corporate synergy at the forefront today, linking superheroes to the somewhat more freewheeling style of movie serials, a movie geek obsession of an earlier vintage. As such, necessary tie-ins to Marvel movie continuity such as the Thor-related cosmic cube carry double meanings as both references to other projects and elements of pastiche, in this case the mystic powers chased by however many pulp villains and serial baddies - honestly, Raiders of the Lost Ark comparisons are begged to a distracting degree by the final battle, and Johnston generally lacks the consistency of vision Steven Spielberg brought to his own stuff, but as a means of coping with what I imagine are corporate dictates in an artful way it's interesting nonetheless.

And that's all before we get to the film's genuinely startling finale, which plays the title character's inevitable integration into the modern Marvel universe as straightforward horror softly giving way to a dawning realization that everything corporeal that Steve Rogers ever loved or desired is probably dead and gone. It's by far the most downbeat ending I've seen in a modern big-ticket superhero movie, declaring without much subtlety that moving the character into continuity has completely ruined his life. I don't think Johnston & company necessarily mean to be subversive - in a way, it's a cliffhanger ending, so it fits into the movie's larger concept. But the thing about old-timey serials is that the heroes do eventually get to go home in triumph with the friends and romantic interests come chapter 15 or whatever, just as soldiers transition to peacetime. For Captain America, stuck in the endless threat of ongoing superhero continuity, there can never be rest or lasting satisfaction; his is a serial that cannot end, as he is too potentially lucrative, and for the circumstances of his virtue he is condemned straight to hell. 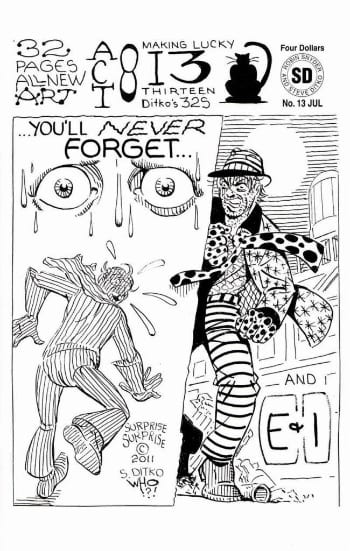 Meanwhile, away from the sliver screen but connected, living, to the depicted time period, Steve Ditko continues to release new comics with co-publisher Robin Snyder, and I'd be remiss to wrap this little heads up without noting the availability of Act 8, Making Lucky 13, Thirteen Ditko's 32s, the (lucky) thirteenth installment of the artist's one-man anthology. You won't be seeing this on Diamond's list, but sweating eyes are demonstrably watching regardless. 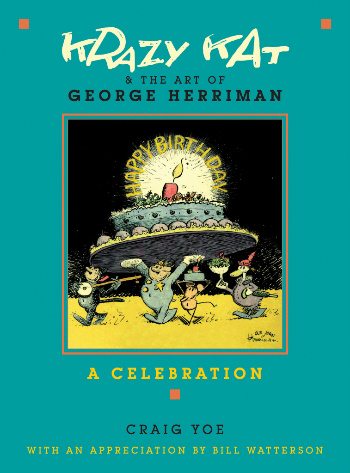 Krazy Kat and the Art of George Herriman: A Celebration: Two books-on-comics for ya in the spotlight (given that my personal best-looking-thing thing is down bottom, having already been spotlit in its own feature on this site), starting off with a 176-page Abrams collection of essays and appreciations of Herriman's creation, including new writing by cartoonists (Bill Watterson, Richard Thompson) and essayists (Krazy Kat novelist Jay Cantor, critic Douglas Wolk), and vintage materials by E.E. Cummings, Gilbert Seldes and others. Edited by Craig Yoe; $29.95. 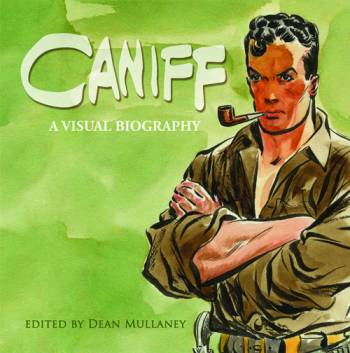 Caniff: And next there's an 11" x 11", 360-page IDW "visual history" of the Terry and the Pirates and Steve Canyon creator, apparently consisting mainly of production materials and little-seen works culled from the artist's personal archives. Edited by Dean Mullaney; $49.99.

Walter Simonson's The Mighty Thor: Artist's Edition: I hadn't expected this to become a trend, but here it is - another in IDW's line of full-sized depictions of uncolored original comic book art arranged to form complete stories, all nicks and notes and dabs preserved for your delectation. The writer/artist is Simonson, and the content is The Mighty Thor #337-340 and #360-362, for 176 pages in total at 12" x 17". Sean Rogers has interviewed the artist on the topic of the book at this site; $120.00.

The Jack Kirby Omnibus Vol. 1: Starring Green Arrow: This looks to be DC's current strategy relating to venerable cartoonist reprints, having burned through a lot of long runs - fat compilations of miscellany. There's a Ditko edition coming out later this month, but for now you've got 304 pages of Kirby short stories dating back to the 1940s from titles such as Adventure Comics, World's Finest Comics, House of Mystery, House of Secrets, Tales of the Unexpected, My Greatest Adventure, All-Star Western and Real Fact Comics; $49.99.

Hero Comics 2011: This is an IDW-published fundraising comic for The Hero Initiative, formed for the purposes of providing financial aid to comics veterans; content-wise, it's notable for showcasing a new strip by the originating creative team of define-the-'90s pop comics hit The Sandman, i.e. Neil Gaiman, Sam Kieth and Mike Dringenberg. Kieth, who departed from the series after the first few issues and has not been associated with it or its many offshoots since, will also contribute a reflection on the reunion (IDW also has the final issue of his 30 Days of Night: Night Again miniseries with writer Joe R. Lansdale this week). There's also some Image-related stuff from John Layman & Rob Guillory (Chew) and Richard Starkings & Dougie Braithwaite (Elephantmen), a contribution by Stephen R. Bissette, and other things; $3.99.

Heavy Metal Vol. 35 No. 6 (Sept. '11): Being a special-issue-that's-not-really-a-formally-Special-issue of the magazine stand comics fixture, devoted entirely to works from the Singapore and Jakarta-based Imaginary Friends Studios; basically, the magazine is turning into Robot or APPLE or VENT or any of those other magazine-like showcases for glossy anime-styled stories and illustration, albeit at the under-$10 production values for which Heavy Metal is known. Preview; $6.95.

Roger Langridge's Snarked! #0: This is a preview book of Langridge's new Lewis Caroll-themed series with Boom!, I think consisting mostly of background material, although an eight-page Langridge comic is promised. As always, the artist is worth a look. Preview; $1.00.

Usagi Yojimbo #139: Tom Spurgeon had a nice chat with Stan Sakai the other day, which gives me the opportunity to observe that a new storyline in his signature series begins here. Preview; $3.50.

Slam Dunk Vol. 17 (of 31): Your mainline manga pick of the week (although I know some of you are pretty into Bakuman, so be aware that vol. 6 of that is due too) - more from Takehiko Inoue's seminal '90s basketball series; $9.99.

Tank Tankuro: Prewar Works 1934-1935: But if it's proper older-than-old-school manga you want, I can't imagine you doing better than this 256-page Press Pop slipcased hardcover collection of pre-Tezuka robot manga by Gajo Sakamoto, accompanied by a suite of essays and Chris Ware's package design. I can't imagine this not being interesting. Previewed at this site, with comments by Dan; $29.95.

CONFLICT OF INTEREST RESERVOIR: Smashing together a 2008 slipcased book set, Willie & Joe: The WWII Years is 704 pages of Bill Mauldin stuff in a new softcover edition; $39.99. 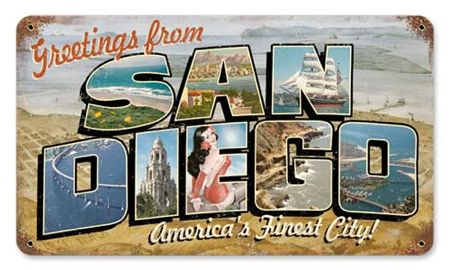 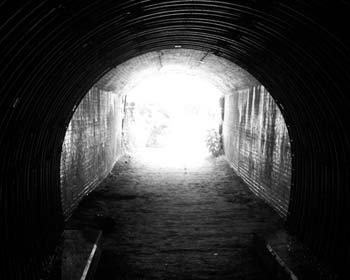