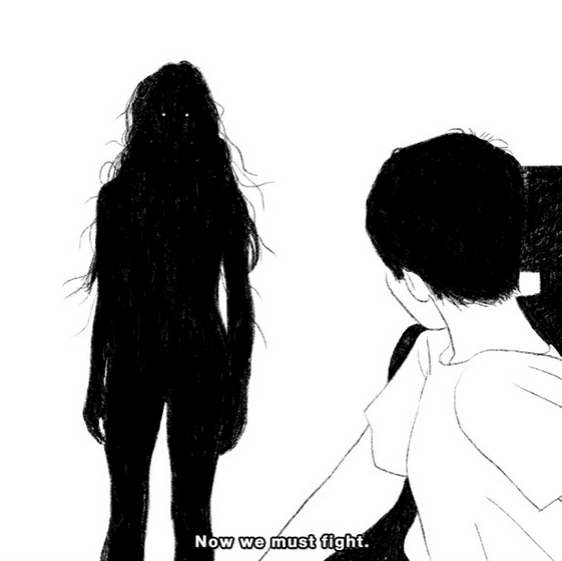 From A Mysterious Process, a 2014-15 webcomic by the excellent GG, which speaks to me quite profoundly through its images of seeing films alone and cutting off parts of the self - and indeed, its subtitled dialogue, which severs characters from their own conversation, transforming the act of communication into a localized observation by the isolated protagonist/viewer; the frame ascends and descends to communicate intensity of feeling, almost always squeezing when people need to talk. Comics aren't movies, but the superficialities joining the two can be meaningful in these circumstances... 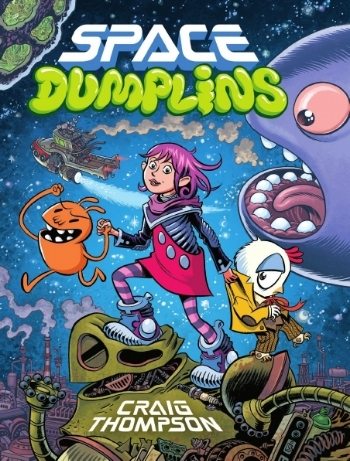 Space Dumplins: I was surprised to see this sitting unassumingly in the children's section of a local comic shop this past weekend, as I'd not been keeping track of when it was actually due. It is, of course, the new graphic novel by Craig Thompson (of Blankets and Habibi), this time a 320-page outer space romp for kids, colored by Dave Stewart of many a Hellboy comic. My cursory flip-through suggested lots of big, detailed images, maybe not unlike Thompson's work for the old Nickelodeon Magazine. I think the big box bookstores should also be getting it this week. Preview; $14.99 ($24.99 in hardcover). 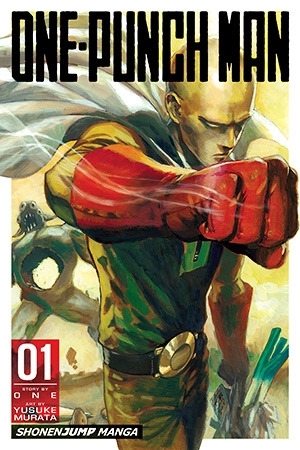 One-Punch Man Vols. 1-2: Lots of happenstance going on here, in your manga pick of the week. One-Punch Man started out in 2009 as a webcomic run by somebody calling themselves ONE - starring a caped superhero so over-powered he can never get a really good fight going with any type of villain, it was a scrawly goof on shōnen manga conventions that unexpectedly became a genuine popular manga production after ONE paired with artist Yūsuke Murata (an authentic Shōnen Jump contributor, known as artist of the American football series Eyeshield 21) to remake the series for the website of the seinen magazine Young Jump. It is this latter incarnation which provides the basis for VIZ's print editions, which I understand will differ in some ways from the digital versions which have been running for a long while in the English-language digital Shonen Jump anthology (essentially in the way the Japanese print editions, currently up to vol. 9, differ in formatting from the Young Jump website incarnation). Blending genre lampoon with working-man's melancholy in the form of extremely decompressed, highly muscular spectacle-driven superhero action, One-Punch Man may suggest to English readers a variant on early '90s Image comics, and indeed has already found some unusual popularity among readers sympathetic to that timeframe; $9.99 (each).

Out on the Wire: The Storytelling Secrets of the New Masters of Radio: Those with long memories will recall the late '90s release of Radio: An Illustrated Guide, an informative comic Jessica Abel put together in collaboration with Ira Glass toward the end of the Fantagraphics run of Artbabe. It's been a while, but the alt-comics veteran and educator's interest in radio remains evidently strong, since now we have a 240-page Broadway Books release of personal stories and narrative theories from the makers of shows like This American Life, Radiolab, Planet Money and others, all in the form of Abel's comics. An upcoming podcast promises to release even more information; $17.00.

24 by 7: An original anthology from UK publisher Fanfare, which has had some good fortune in the past releasing books like the Franco-Japanese Japan as Viewed by 17 Creators (2006) in collaboration with Ponent Mon. This 192-page hardcover gathers seven creators -- Sarah McIntyre, Joe Decie, Kristyna Baczynski, Fumio Obata, Jack Teagle, Warwick Johnson-Cadwell and Dan Berry (also the editor) -- who gathered in one room to produce new comics for the Lakes International Comic Art Festival over a 24-hour period in 2014. The 7" x 9" edition should also include some photo documentation of the creative process; $25.00.

City of Crocodiles (&) Hunger House: But Fanfare is not content with releasing its own book this week, as I believe it also functions as distributor for Borderline Press, which has two offerings of its own. City of Crocodiles is the work of Knut Larsson, an artist and filmmaker who's been in a few anthologies you may have seen (Stripburger, C'est Bon); a wordless book concerning surreal life after a flood, it was first released in Sweden in 2008. Hunger House is similarly the work of Swedish talents, this time artist Loka Kanarp and writer C/M Edenborg; it's a haunted house story, published in Sweden in 2011. Both Larsson and Kanarp were also in the 2008 Johannes Klenell Swedish comics survey From the Shadow of the Northern Lights, if you desire to read further; $22.95 (Crocodiles), $25.00 (Hunger).

Snowden: Being a new 224-page comics biography of the famous infrastructure analyst from writer/artist Ted Rall, who has been in the news himself lately due to considerable controversy surrounding an opinion post made to an LA Times blog. The publisher is Seven Stories Press; $16.95.

Inuyashiki Vol. 1: We're still waiting on Dark Horse to release the final installment of Hiroya Oku's indefatigably trashy action series Gantz -- it's due in October -- but Kodansha is already stepping forward with an English translation of his current series, an SF serial for the older-skewing seinen monthly Evening about a fiftysomethng man who is unexpectedly rebuilt through alien technology as a mechanical marvel... but he is not alone, and not everyone's intentions are good. It's up to vol. 4 in Japan right now; $12.99.

The Kurosagi Corpse Delivery Service Omnibus Edition Vol. 1: There's several Dark Horse manga series reaching into the high numbers right now, so I suspect the opportunity to get earlier volumes organized in a less cumbersome manner will come as a relief. The Kurosagi Corpse Delivery Service is a comedic horror series about struggling students pushing souls into the afterlife from writer Eiji Ōtsuka -- also a pioneering editor, media critic, and all-around super-interesting guy -- and artist Hōsui Yamazaki; truth be told, Dark Horse still has six Japanese volumes of stuff it hasn't published yet in the series, but from this reprint project we might also potentially divine its commitment to the newer books. Samples; $19.99.

Zenith Phase One: Apex Edition (&) Superman/Batman: Michael Turner Gallery Edition (&) The Walking Dead #1: Artist's Proof Edition: Publishers continue to chase the popularity of IDW's Artist's Edition line of deluxe editions in their own way. The "Apex Edition" of Zenith looks to be a straight riff, as Steve Yeowell's b&w artwork for the early Grant Morrison-written 2000 AD superhero serial is presented at 14.4" x 18.7" dimensions, reproduced in color so you can linger over all the marks and paste and stuff. A 112-page hardcover. Superman/Batman is part of Graphitti Designs' similar (and, as of now, exclusively DC superhero-oriented) "Gallery Edition" line, here paying tribute to the late Turner with a 208-page, 12" x 17" collection of 2004's issues #8-13 of the Jeph Loeb-written series, which I believe will capture the artist's work in pencil form. The "Artist's Proof Edition" of The Walking Dead #1, meanwhile, appears to be a simpler, 11" x 17" mounting of Tony Moore's inks for the issue, prior to the application of tones; $95.00 (Zenith), $125.00 (Superman/Batman), $19.99 (Dead).

Hellboy in Hell #7: And we'll close where we began, with a comic that is colored by Dave Stewart. Also, it is the newest irregular release from Mike Mignola, who writes and draws the first of a two-part story concerning an illness suffered by Hellboy among the phantoms of perdition. Hellboy in Hell is a genuine oddity in today's franchise comics - an ostensible line-leader, handled by the line's creator, which has abandoned any pretense of actually providing shared-universe direction to its myriad spin-offs in favor of allowing said creator to explore his whims in a manner closer to that of a self-published comic. Note that Dark Horse has already scheduled issue #8 (part 2 of 2) for next month, so I presume Mignola finished the story up in advance. Preview; $2.99. 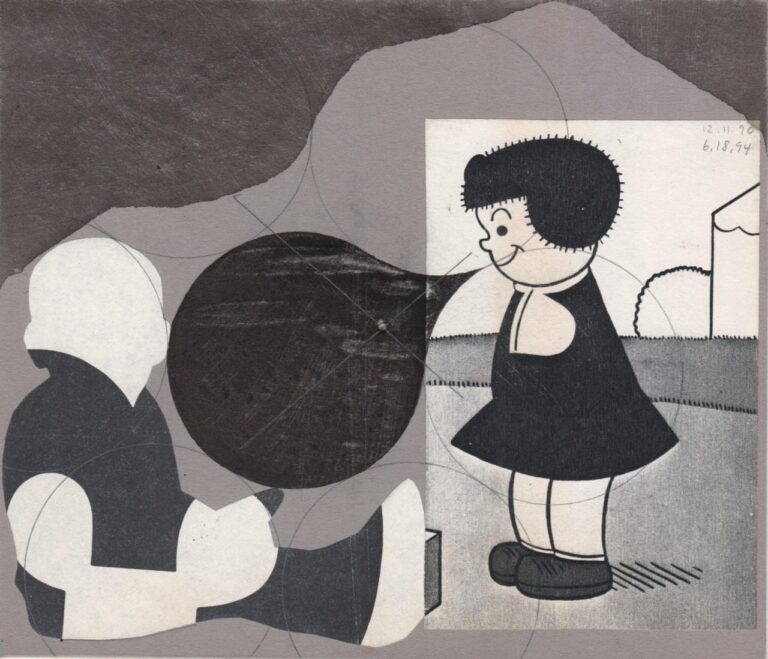 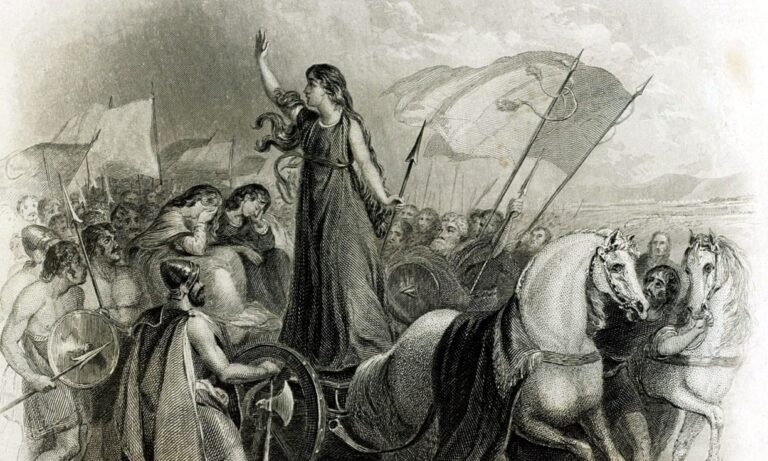